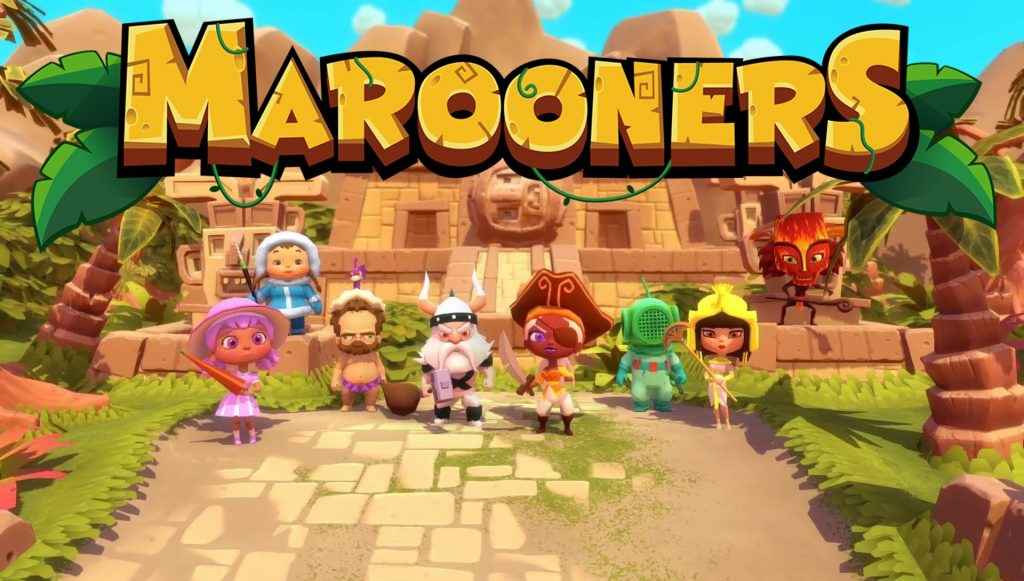 Look, there’s no getting around it; if you’ve got a bunch of friends that can be called upon for some local multiplayer gaming then Marooners is a lot of fun, a *lot* of fun indeed. Imagine a party game where every ten seconds or so, quite literally, the entire game changes. One moment you might be trying to knock your opponents off of a high-set, icy platform, while in another you could find yourself running away from a tumbling boulder with no room to breathe in between.

The freshness that such a chaotic concept brings to the party game cannot be understated and in practice, Marooners freewheeling approach to the party game template is both welcome and highly enjoyable in a way that few titles of this ilk have been of late.

Like all the best party games, the premise of Marooners is both easy to understand and simple to get to grips with in practice. In Marooner’s party mode, and as one of six brightly hued oddities that includes such caricatures as deep sea mariners, pirates, voodoo priests and just about everything in between, players must collect as much treasure as possible until all the stages have been completed; the victor of course being the one who has stuffed the largest amount of shiny loot into their pants. By comparison, the premise of the Arena mode is simpler still, with success coming to the player who remains standing after everybody else has been booted off the stage.

Where Marooners is ostensibly at its best however, is in how it allows players to play sessions that mix and match those two game types, leading in turn to some of the most hilariously unpredictable multiplayer shenanigans of recent memory. With other 25 different game types and arena maps, the variety of shenanigans that you’ll get up to in just a single session of play can be dizzying. Whether you’re avoiding falling rocks, digging through the ground in a Dig Dug inspired 2D side-scrolling jaunt, or just trying to avoid drowning in a river by hoping from one set of flowers to the next, Marooners breakneck switcheroo pace definitely succeeds in keeping things fresh for the duration of play.

The kicker to all of this though is that should you perish on in any one of Marooners maps, the next time that map rotates around you’ll find yourself embracing the ethereal form of a ghost, rather than being reattached to your mortal coil for that map. Unable to collect the treasure needed to secure victory, ghosts are nonetheless able to make life miserable for the remaining players as they’re free to knock them about the place, and even better, blast them off the edge of an arena with a well-placed strike. To spice things up even further, every map also boasts a number of mystery cubes that in turn provide random buffs such as massively devastating bombs that can be tossed across the map, or, a big ol’ set of boxing gloves that can send your enemies flying much further with each strike than ever before.

More than just affording bragging rights and providing ample incentive to scoop up as much loot as you can, the total of your accrued cash also bumps up an experience meter at the end of every game, with each new level unlocking a new character or weapon for you to use and with 60 plus weapons to unlock. As such, it’s fair to say that you’ll be plugging away at Marooners for a good while before you unlock absolutely everything.

Still though, as frequently fun and reliably hilarious is Marooners is, it nonetheless finds itself in possession of a couple of shortcomings that serve to lightly tarnish the overall experience. Though you have the aforementioned 60 plus weapons to unlock, it’s worth mentioning that each of them only seemingly differ from a cosmetic point of view and that when you employ any of them in battle, none of them feel terribly different or satisfying to use.

Beyond the somewhat limp feeling of Marooners frequent melee encounters, the computer AI opponents that the game uses to either fill up the numbers, or compete against exclusively in solo play, leave something to be desired to say the least. Often oscillating wildly between towering stupidity and the sort of flawless killing machine mentality that would make a T-1000 blush, the lack of middle ground in the behavior of your AI foes makes them frustrating to compete against to say the least, though hopefully this is something that can be sorted out by a good old fashioned patching in the future.

Ultimately then Marooners, like many of the entries in the party and local multiplayer genre, is an affair best shared and enjoyed with friends. Whether you’ve got a bunch of friends around with snacks to match, or you’re hopping online to clash with other PS4 players from across the globe, the simplified matchmaking screens and lobby system both contribute to make hooking up with other players an effortless pursuit.

With its relentlessly colorful visuals, whimsical presentation and easily accessible party game mechanics, Marooners emphatically stakes its claim as one of the most enjoyable multiplayer games on PS4, and more importantly, one that can be enjoyed by anybody regardless of age or experience.

Did you enjoy this Marooners review? If so, why not check out our Marooners game page, here.

A wonderfully mad and yet eminently compelling take on the party game genre, Marooners is just the shot in the arm that the local multiplayer scene needs on PS4.