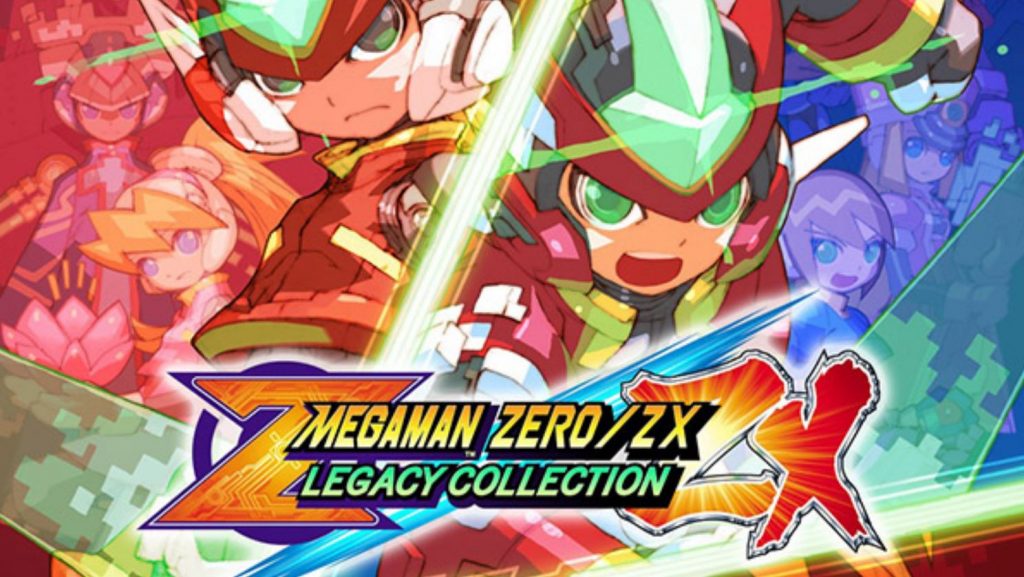 The Mega Man Zero/ZX Legacy Collection features four Mega Man Zero titles and two ZX titles. The Zero titles made their debut on the Game Boy Advance while the ZX titles released on the Nintendo DS, so for many PlayStation fans, this may be the first time they get to experience this collection.

Mega Man Zero takes place a century after the events of the Mega Man X titles. Zero has been asleep hidden from the world for over a century until he’s discovered by Ciel, a human scientist who has joined the Resistance to help other Riproids from being massacred. Her goal is to conserve this because of a massive energy crisis that has befallen Neo Arcadia, a city where humans and Riproids were supposed to live in harmony.

The Zero story itself is actually pretty good, much like the plot in the Mega Man X franchise. The mature story was always a great change from the original Mega Man games as it allowed the developers to appeal to a wider audience. I won’t spoil the story here, but it’s one that I recommend you get through, especially as a fan of the Mega Man franchise. Throughout the four Zero titles, you’ll see how each one improved its storytelling with small improvements that I wish they would have applied to all the games.

Later titles have cool animated cut-scenes and the only title in the collection ZX Advent has voice acting, though really this probably could have been implemented into all the games.

When it first released Zero was hailed as a great return to the Mega Man franchise, but it came with some major changes that some people just weren’t happy about. The biggest change came in the form of the Metroidvania style design. You weren’t able to select a boss and go to their world anymore.

Another change focused more on accepting a mission and being transferred to its beginning area, but the overall world was all connected allowing you to visit areas you’ve already gone through to find hidden objects and collect Cyber-Elf Chips. This change would have been more acceptable if there was some kind of map system in the first Zero title. The ZX titles, on the other hand, do feature a map system, but it’s not that great and very hard to read.

In Mega Man Zero 2, 3, and 4 however the games went back to the boss selection process which is a great change because the games just seem to work better this way. The Metroidvania system of navigation, unfortunately, returned in the ZX and ZX Advent titles

Zero also features a level-up system. Instead of gaining the abilities of defeated bosses like you did in the X franchise, you instead gain new attacks by simply defeating enemies. The saber that Zero uses levels up with enough kills giving Zero different abilities to use with the saber or any other weapons he uses. This goes for his blaster pistol as well, and later a cool laser spear that allows you to attack enemies in a 360-degree rotation.

The spear is replaced in other titles with different weapons like a harpoon and twin tonfas, but each one is specifically designed to help you with the types of bosses and enemies you encounter along with the obstacles you have to transverse.

In the ZX titles, on the other hand, defeating a boss allows you to transform into that same boss and use their unique abilities; allowing you to find secrets and even in some cases actually progress in the story. Selecting these new forms can be a real pain though. The ZX titles were released on the Nintendo DS, which used the touch screen to select these different forms.

Without a touch screen on the PS4, you instead have to use the right analog stick to activate the tiny map screen in a corner which acts as the touch screen and select the form with a mouse cursor. Imagine having to do that in a fast-paced action game where a split second miscalculation will lead to death. Thankfully, they allow you to select these abilities with the tap of the L1 button and then simply select the form, but even then it’s still way too time-consuming in split second decisions.

Cyber-Elf Chips are also unique to the Zero franchise and can make these games a walk in the park. These Cyber-Elf Chips are dropped randomly by enemies and bosses, supplying Zero some unique attributes both for single-use and some which are more permanent. Each Elf Chip has three levels to upgrade, using energy that you find throughout the games.

A level 1 Elf Chip is a single-use item that can either heal you or use it like a bomb or a stepping stone on a wall. They all have different abilities and uses. The level 2 and level 3 Elf Chips are used for more permanent stat increases, things like increasing your health or energy bars. Using these Elf Chips comes at a cost, but it’s only a cost if you care about the trophies.

After completing each mission, you’ll be judged with a score of how well you did in that mission. If you choose to use these Elf Chips, your score can drop into the negatives and this affects the trophies you can get in the game. A problem I found with the Elf-Chip system is the lack of any real explanation of how it actually works. A better tutorial would have gone a long way, especially in the first Zero game.

The Mega Man Zero/ZX Legacy Collection has some graphic filters you can choose from and a bunch of amazing artwork and concept art to unlock, but the big addition is the Z Chaser mode. This new mode is a time trial mode where you race against the clock to finish a stage as quickly as you can. You can even play this mode in local split-screen against a friend, putting you head to head with your pals.

It’s not a mode for me but many people will find some fun use for it, especially since there are leaderboards with player scores from around the world to go up against.

Another worthwhile addition is the Checkpoint and Casual Play modes. The checkpoint system sets up checkpoints throughout the stage so that when you die instead of starting from the start of the mission, you’ll simply start at a checkpoint. It also removes how many lives you have, allowing you to die and restart as many times as you like.

The Casual Play mode meanwhile keeps you from dying when falling to your death, instead simply resetting you in the last location you jumped from. It also reduces how much damage you take from attacks. This mode is perfect for people trying to get into the franchise for the first time.

Mega Man Zero/ZX Legacy Collection is yet another great collection for any Mega Man fan. For a lot of people, this may be their first experience with the Mega Man Zero titles and this collection is perfect for franchise fans and people looking to get into the franchise for the first time thanks to the checkpoint and Casual Play modes.

There is plenty to love about the Mega Man Zero/ZX Legacy Collection. With great new additions like Casual Mode and a Checkpoint system, the Zero franchise can be enjoyed by both new and longtime fans of the franchise. It's just a shame that improvements seen in later games weren't retroactively put into earlier games to bring them all completely up to date.