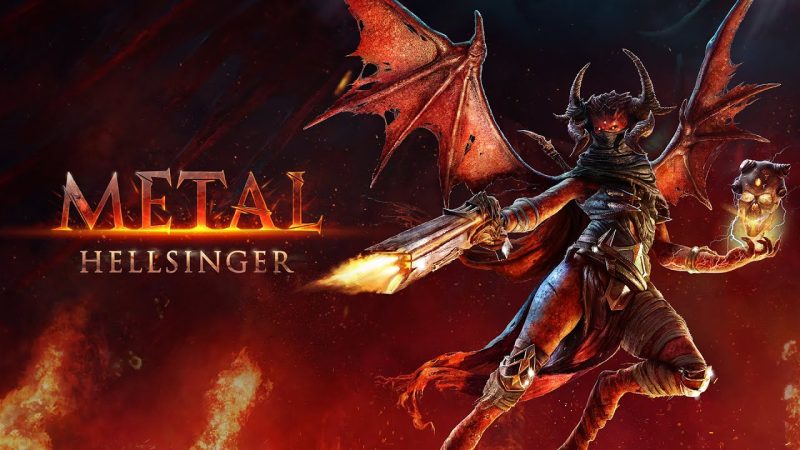 A rhythm shooter? With cool looking weapons? That ties some head-banging worthy music to your high score?

All of it sounded intriguing, which is what led me to the the demo pre-release, only to feel disappointed. The music was great, but almost every other aspect of Metal: Hellsinger felt lacking.

Of course a demo isn’t nearly the whole story, and I was still intrigued enough that I wanted to play more.

So after rolling credits on Metal: Hellsinger, while it most certainly had its moments, the whole experience still left me wanting for something more. 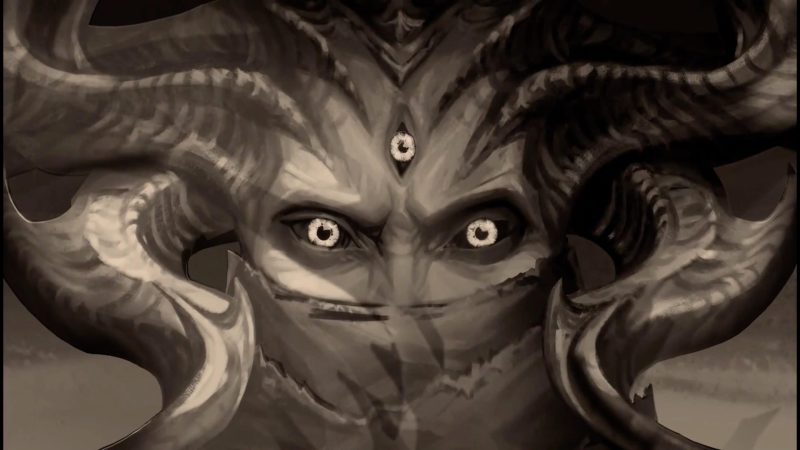 Firstly, if it wasn’t already clear from the gameplay, look, and overall tone of Metal: Hellsinger, it takes a lot of inspiration from Doom.

Not a bad thing conceptually, but its similarities do consistently remind you of that inspiration, which resulted in me comparing the two constantly, one that almost always leaned more in favour of Doom than Hellsinger.

The big exception however to that comes with the story, which still very much feels like a Doom inspired tale, but its in the execution of it that makes it a lot more enjoyable.

You play as “the Unknown,” who you later discover to be the prophesized “Hellsinger,” a single being capable to destroying all of Hell’s armies. Sound familiar?

The main plot see’s you on a quest to firstly reacquaint yourself with Paz, your companion throughout every deadly encounter and even one of your base weapons. 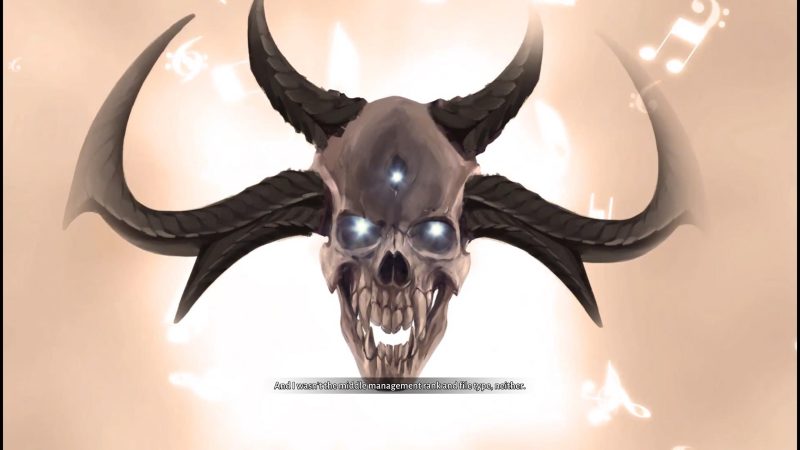 While the story is very much not the point, similar to Doom, it was at least able to get me somewhat invested in the characters, and what’ll potentially be happening next with them, after Hellsinger’s cliffhanger ending.

Maybe it was Troy Baker doing his best southern drawl that kept me intrigued, or the art that came with the cutscenes that bookended each level.

Either way, it felt like developer The Outsiders went far enough with the story that I wasn’t totally bored, in a game where the story is clearly at the bottom of the ‘importance’ hierarchy with your high scores and the core gameplay at the top.

The Beat Is Everything 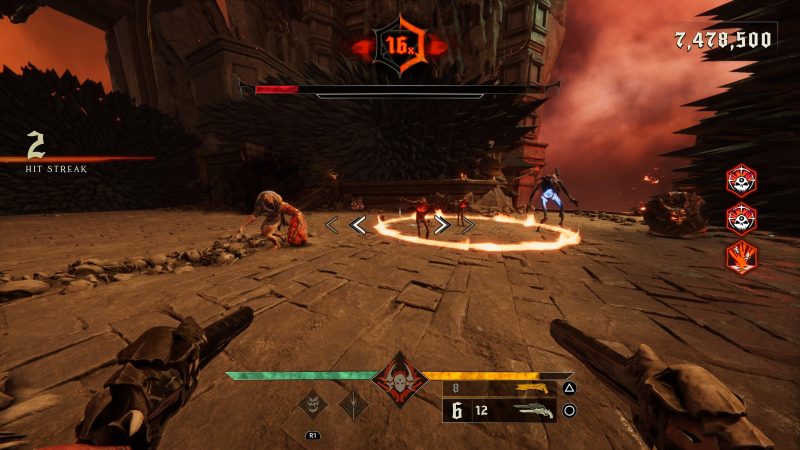 Everything in Metal: Hellsinger, and I mean absolutely everything, is in time with the beat of the song that is the level you’re playing. Hellsinger consists of eight levels in total, all of which have their own original track tied to them.

The combination of the original music and the way each weapon feels good to fire can keep you playing Metal: Hellsinger with a smile on your face when everything comes together.

Building on to the song slowly as your multiplier increases while you watch your beat counter go up can even produce some heart-pounding gameplay as you try to hit your highest streak.

You can even get into a great flow state, similar to that of the ‘Doom Dance’. There’s just something about hitting 50+ consecutive perfect shots that makes clearing a room of demons feel euphoric.

Just as hitting those shots feels euphoric, missing feels equally terrible, especially because you can potentially immediately interrupt the progress you made, and the song that had built up is suddenly stripped back down. 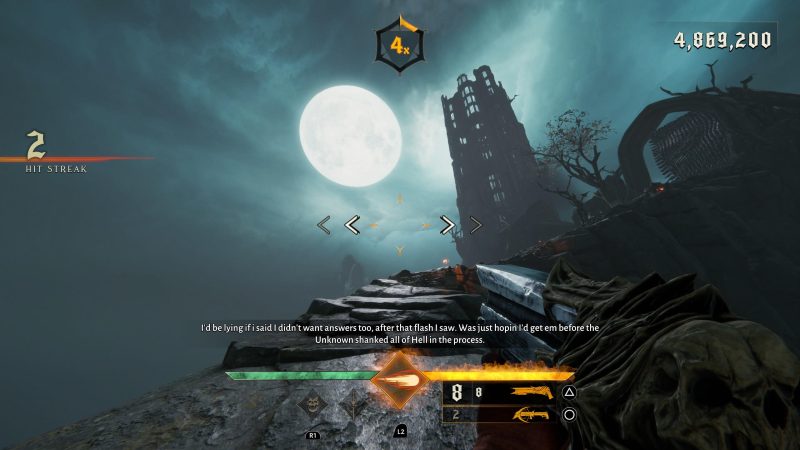 It feels awful, and can really interrupt the ‘flow state’ you fall into. Thankfully you can get back to the song’s complete glory in no time, but the interruptions make every mistake feel worse than it really is.

And how bad those interruptions can feel speaks to how good each of the songs across the eight levels are. I never wanted to interrupt them because I could hardly stop headbanging and toe-tapping along.

Even as someone who isn’t the biggest metal fan, good music is undeniable, and that’s the truth for Metal: Hellsinger’s original tracks. 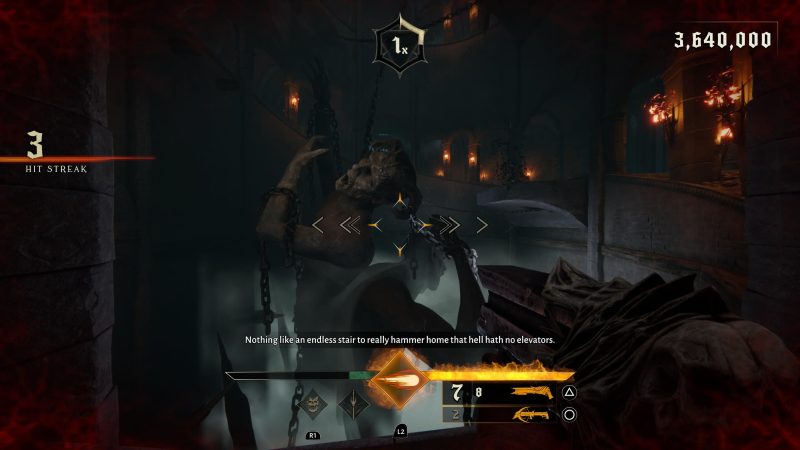 Metal: Hellsinger can feel really amazing and fun at times, but those moments become more stretched out as you get towards the credits.

You see, it’s not that Metal: Hellsinger does anything particularly bad, it just doesn’t seem to go far enough.

Starting with your weapons, you have two that are always equipped, a sword and Paz who’ll shoot fireballs out of his eyes.

On top of that you’ll pick two out of four unlockable weapons, none of which can be upgraded or modified.

You do have these things called Sigils to act as modifiers, though you’ll need to unlock those through extra side-challenges.

None of the weapons feel terrible to use, but none of them feel as good as Hellsinger’s inspirations.

The crow boomerangs are the most unique weapon, but they’re mainly situational, specifically having to deal with shielded enemies. 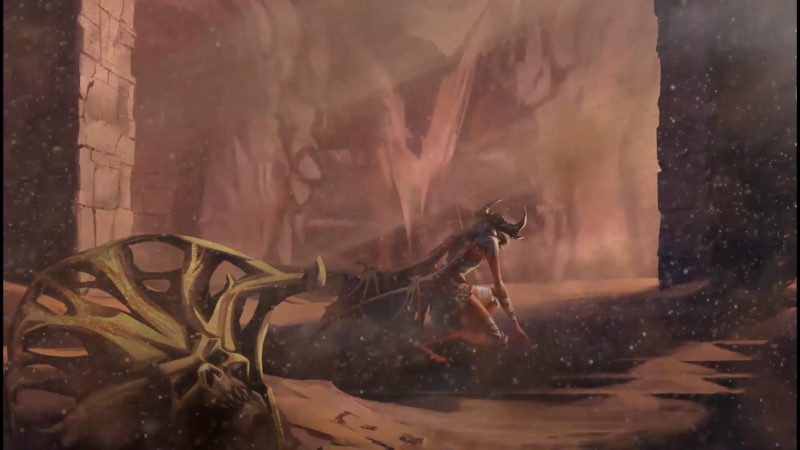 Barring that, the pistols and shotgun remained my loadout of choice my entire playthrough – because I never felt the need to really use anything else beyond its introductory level.

How you move as the Unknown also never feels as fluid as I’d like it to be. I found myself getting stuck on environmental objects often, ledges particularly.

It felt counter-intuitive to the level design seemingly trying to add any verticality, especially since your jumps don’t really take you far.

Dashing is the most useful part of your movement arsenal, and while you can still have those clip-worth moments dashing strategically around enemies while hitting each headshot, the movement feels stale before you reach the final level. 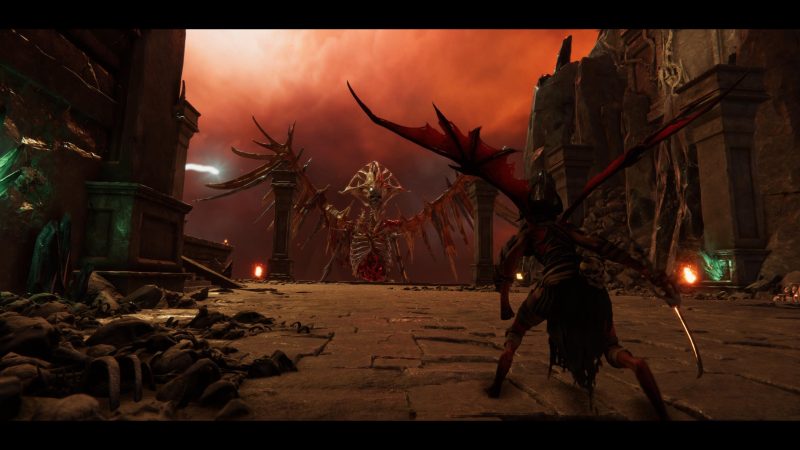 Speaking of things getting stale, the boss fights immediately felt disappointing by the third ‘skull with wings’ I fought, especially considering the lack of any iteration until the very end.

Only the final boss is anything different, and even that fight lacks any innovation for anyone who’s played any game where you fight something really really big.

Which ‘Hell’ Is This Again? 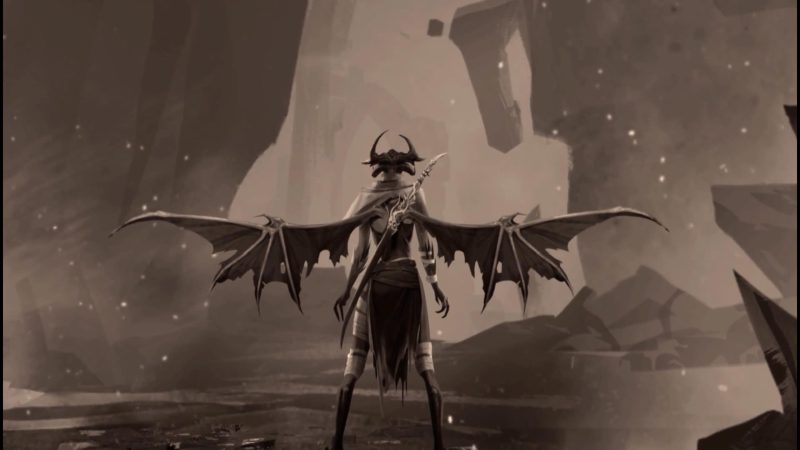 Each level in Metal: Hellsinger takes place in a different ‘Hell’, the different realms that together make up Hell, and the eight areas you’ll rampage through.

In all honesty, each area blended together more or less. None of them looked especially amazing, and apart from things like torches moving to the beat, nothing really catches the eye.

It’s just another area where Hellsinger struggles to make an argument for itself against the overall better titles that inspired it.

The best looking part of the game, I think, is the Unknown’s model in the menu, which is admittedly very striking and terrifying at the same time.

That’s just more to the point that environments feel like a lot of other aspects in Hellsinger – more middling than anything.

Ending On A Strong Note 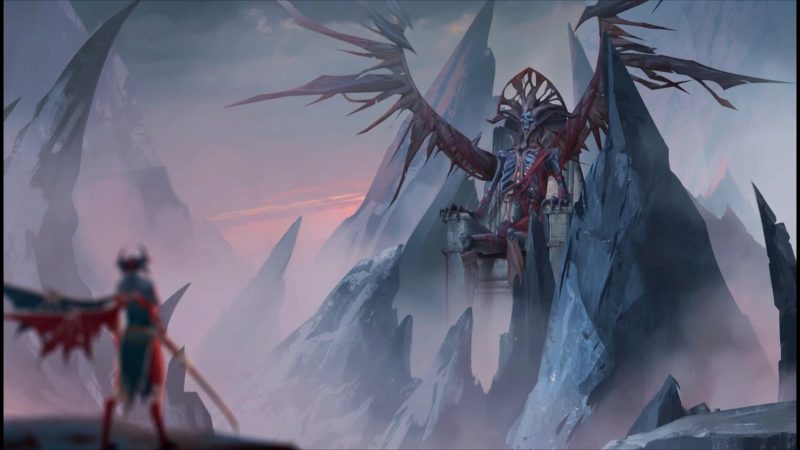 Metal: Hellsinger is by no means a bad game, but its biggest issue falls back to it constantly reminding you of the games that inspired it, and the fact that those inspirations do whatever Hellsinger is trying to do, far better.

The best part about Hellsinger really is the music, and how it can blend with the combat to create some extremely heart-pounding, headbanging moments.

But you’ll have to really love the songs within to want to keep playing through the levels again and again, because once you’ve played them once, you have very little reason to go back other than attempting a higher score.

The side-challenges known as Torments are addictively fun to complete, as you play through all 21 challenges. They’re just the right length and give the gameplay some much needed variety, but once again there’s little replay value once you’ve achieved the top rank.

So while I’ve had plenty of fun with Metal: Hellsinger in my time with it, I never could let go of the feeling that time spent with it could be spent playing games that do what it’s doing only far better and in more unique ways, like Doom or BPM: Bullets Per Minute.

But if you’re a massive metal-head and wouldn’t mind blasting away demons to for a weekend, then Metal: Hellsinger is an absolutely great time.

Metal: Hellsinger is available on PS5.

Metal: Hellsinger is an absolute head-banger of a game with amazing tracks to accompany each level, but it's rhythm-based gameplay does little to stop it from constantly reminding you of the games that inspired it, games that are fundamentally better executed in their core gameplay. It's repetitiveness and lack of any innovation doesn't make it a must-play game for shooter fans, but it's music does for any heavy metal fan.