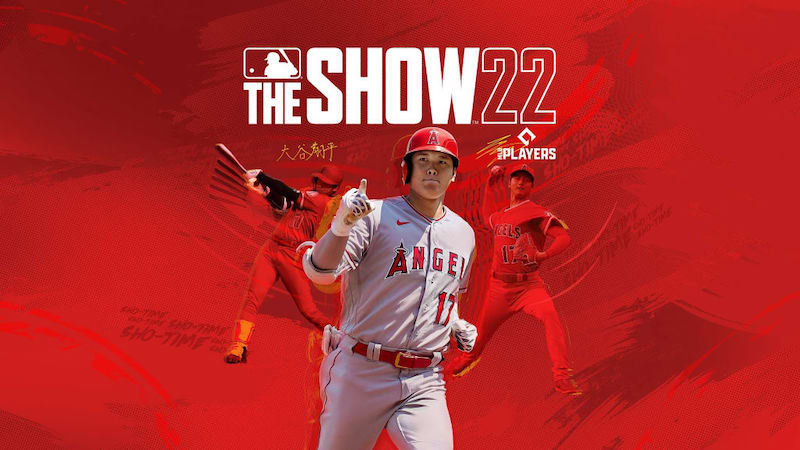 MLB The Show 22 Review (PS5) – Not many things are reliable. The sun setting in the West, Tom Brady making me hate American Football, and MLB The Show being one of the best sports simulators are all exceptions. While all of this remains true, MLB The Show 22 has seemingly taken on too much with this year’s baseball simulator.

The Show 22 continues to push the sports sim genre, striving to be authentic, fun, and realistic. From the way fans interact with their team to how players carry themselves on the field, The Show always looks for those tiny details to make the game emulate real life. While all of this is there, sadly, it’s not enhanced as much as I wanted or come to expect. 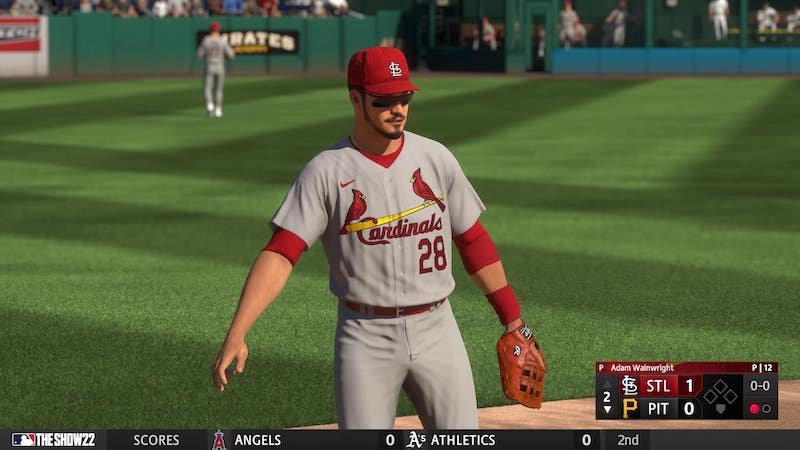 For The Love Of The Game

From the moment you start MLB The Show 22, you’re treated with an intro that will instantly have you itching to get started if you have any love for baseball. Then, like most years, the cover athlete takes you by the hand and brings you into the clubhouse, with this year’s being the incredibly talented Shohei Ohtani from the Los Angeles Angels.

From here, it’s pretty standard for the game. Like in the past, players can pick from four game modes; Diamond Dynasty, Road to October, Franchise, and the ever-popular Road to the Show. These modes haven’t changed, with Franchise allowing you to play seasons with your favorite current rostered team and Road to October giving you more agency over the management of your team. 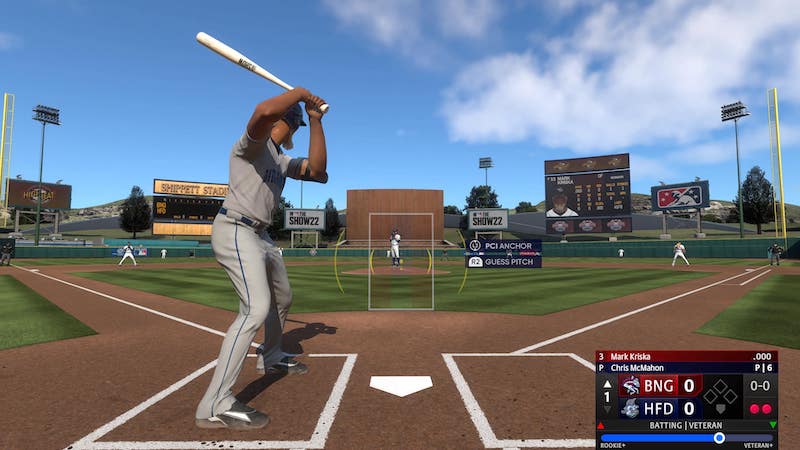 Road to the Show still allows you to port over a character you made from an older generation or make one from scratch with an in-depth character creator. There you will play moments in games while also trying to complete objectives. As you level up, you will gain Studs to buy packs of cards that you will use to edit your player-made team to acquire the best players.

These game modes have been offered for the past few years and have become staples of The Show. Nevertheless, San Diego Studios always tries to give players a few more new additions. While small, these modes help to round out the game.

The biggest addition to The Show 22 is the 2v2 or 3v3 co-op. This allows players to play either locally or cross-platform. The co-op has been a fun addition and something I hope they build on in later games, whether with friends or in matchmaking.

The Show always strives for its players to feel like they are in the game through the atmosphere, in-depth player options, and the dual sense. These combine to make you feel as close to the field as possible without being a pro ballplayer. However, this year feels like the improvements have been slightly smaller. 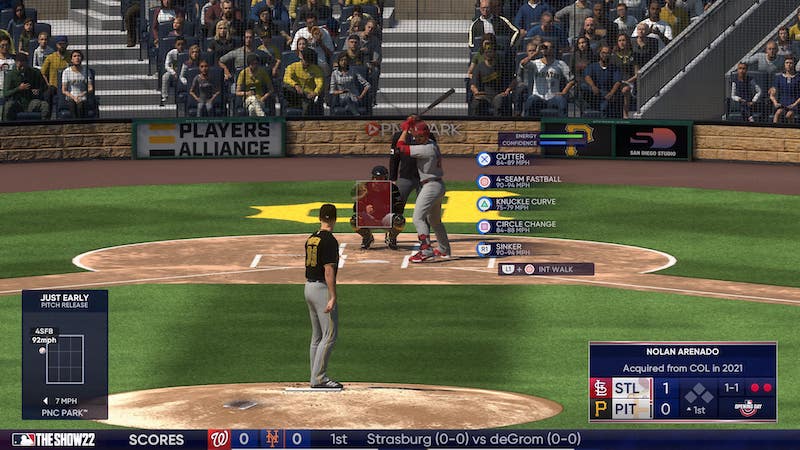 This is hard for me to say, knowing how much work San Diego Studios puts into their game, but I was disappointed with The Show 22 visually for the first time that I can remember. The game still looks great; nothing looks less than solid, from the fields to the character models.

However, it’s hard not to shake the feeling that the second year of full cross-gen support and bringing the game to the Nintendo Switch for the first time lowered the game’s overall quality.

Before anyone gets upset with me, I am okay with The Show going to other platforms; that’s not the issue. In past years, when The Show only needed to be made for one system, the studio could dedicate more energy and time to perfecting a singular product.

However, with The Show 22, San Diego Studios is simultaneously making three separate versions of a game that can run on five platforms when you include last-generation hardware.

With that being said, I find it incredibly impressive that all versions of the game work, with only minor reports of problems, but can allow any form of cross-play. This in and of itself is an achievement that is worth celebrating, even if The Show 22 didn’t live up graphically to what I come to expect from one of the best sports franchises in gaming.

While this is the second MLB the Show on PlayStation 5, it doesn’t diminish the added bells and whistles the system brings. Haptic feedback, fast load times, and higher frame rates are features that make most games better. However, a feature of the PS5 I haven’t used much since launch was a game-changer for MLB The Show 22; Game Cards. 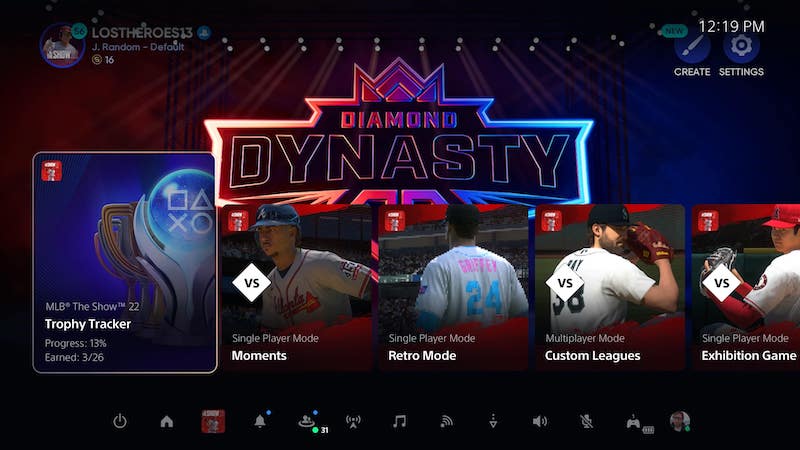 These cards allowed me to jump in and out of game modes instantly. I was always only a PS button away from jumping into any mode, whether I was already in The Show or slicing lego droids in half with a lightsaber in Lego Star Wars.

A Win Even If There Were Errors In The 6th Inning

MLB The Show 22 is a love letter to every Baseball fan in the world, regardless of your investment in Baseball. The ability to get my Pirates a winning season even if they can’t achieve this out of the game allows every fan to see their team succeed.

Creating a player and seeing them through the minors and watching them become a superstar in Road to the Show is a surreal feeling of it being you and your actions but feeling like a proud parent watching as their child succeeds. All of this is meant for Baseball fans by Baseball fans.

Sadly with San Diego Studios trying so desperately to bring the best version of the game to all consoles, the year’s jump in quality didn’t quite meet expectations. Nevertheless, this latest entry is better than the years before. If you loved The Show in the past, this year will be no different.

MLB The Show 22 stumbles for the first time in recent memory. This is understandable with San Diego Studios' ambitious goal of releasing the game on five platforms if we count the last generation consoles. Nevertheless, The Show 22 is still the best baseball sim you can buy and one I can't put down. From the attention to detail to the number of different game modes you can play through, The Show 22 continues to improve on last year's game, even though it's not to the degree we are used to. If you're a baseball fan, I cannot recommend MLB The Show 22 more.