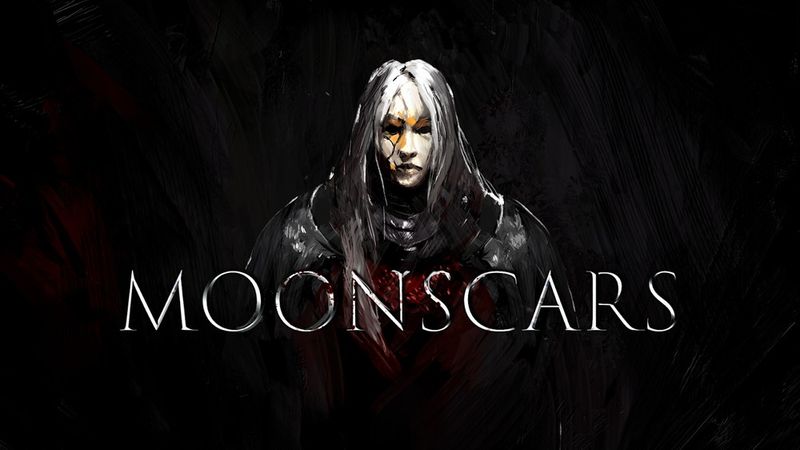 Moonscars Review (PS5) – Not often can I say that a handful of pixel art gifs compel me to play a game, but that’s just what happened with Black Mermaid’s latest Moonscars.

For those who are unfamiliar, Moonscars is a 2D souls-like, non-linear platformer that marks the debut of developer, Black Mermaid. It is worth noting, that this is not a metroidvania in the traditional sense, but does uphold some of the same design philosophies.

Whilst Moonscars certainly makes a great first impression in promotional material, such as trailers, can it maintain a level of quality, worthy of a full campaign? Is Moonscars more than just its aesthetic? 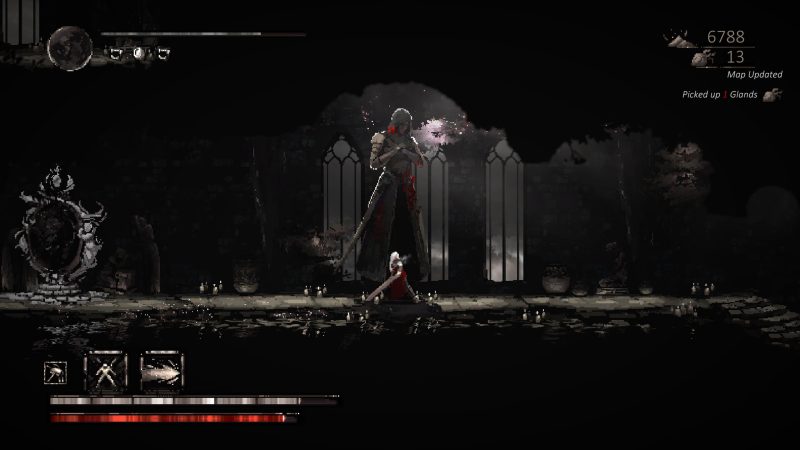 During the opening portion of the game, you will hear what is some of the only voice work in the entire game, and it’s excellently delivered.

What follows, is Black Mermaid setting the stage and tone for the overarching mystery of Moonscars, which naturally, will have you asking a lot of questions, as we join this world, in the latter stages of its story.

Finding yourself in control of a character named Grey Irma, with a head full of questions, and an eyeful of stunning pixel art, you set off for answers.

Grey Irma is a “Clayborn”, which is basically a shell, created in the image of a human, containing a part of that original humans personality and conscience. These clayborn, which boast an army in number, are crafted by a character known as The Sculptor. 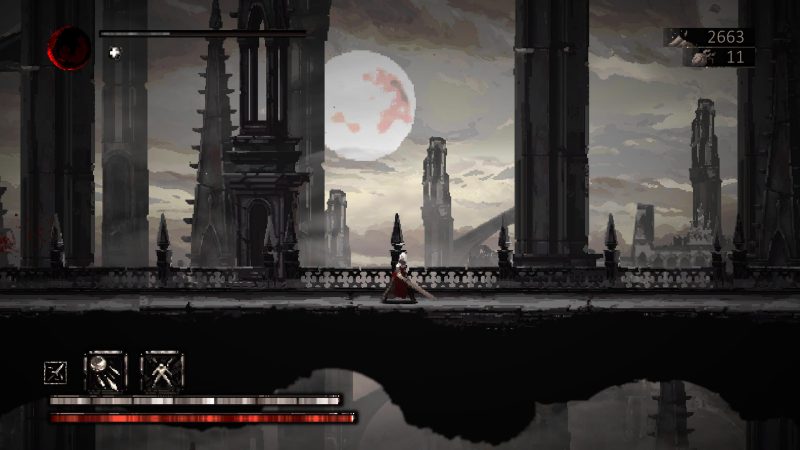 The Sculptor serves as the games primary antagonist, and is the driving force of the mystery that surrounds Grey Irma and the world of Moonscars. The story itself is very well written, with a host of interesting characters.

Moonscars contains an excellent story that explores themes of identity, and what it means to both literally and figuratively break the mold. Simultaneously, Moonscars poses similar philosophical questions as the thought experiment, “Ship of Theseus“.

I won’t divulge further, as the story of Moonscars is best experienced with the mystery intact. There’s moments which had me striving for the next story beat, to see where this game was going.

Not to mention, some elements of the overarching story are integral to core gameplay mechanics, which is really nice touch.

Attack Of The Clones 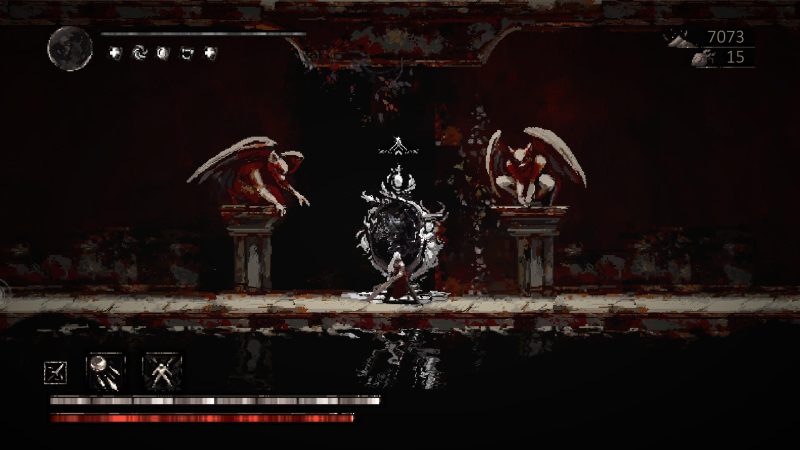 The gameplay in Moonscars is, in a word, awesome. Armed with traditional light and heavy attacks, and dodge functionality, it feels familiar but visceral and acquiescent. Not to mention a very satisfying parry system. Having played more than a few 2D souls-likes, none feel quite as good as Moonscars.

Melee combat also includes special attacks, however the catch with the specials is you will lose them once you traverse an ornate mirror.

Mirrors are a checkpoint system, that also transport you back to the workshop. The workshop is a hub, where you can talk to characters, discover lore, purchase abilities and items.

Doubling back to the special moves. Once you traverse a mirror, Grey Irma will leave a part of her behind. Another clay copy of her, which will be waiting for you when you return. 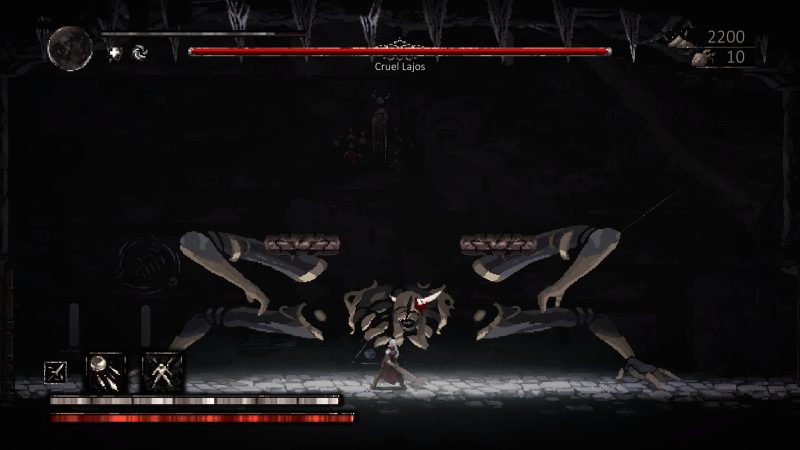 This copy is you, it is your past self, before entering the mirror. Therefore, this copy is armed with your special, where you have vacated it. Beyond being just a cool moment, this is an absolute standout gameplay mechanic, especially given the context of the story.

Defeat this past version of yourself, and your special attack is given back. More than that, you can choose from the other special attacks, if you feel like mixing it up. Additionally, all of these moves are just beautifully animated. Absolutely stunning work from Black Mermaid.

Like all good souls-likes there are boss fights, and this is where a trial and error approach will come in. Bosses in Moonscars do generally ramp up the challenge. Understanding parry timing, amulet stones, witcheries, and attack patterns are the cornerstone of success for each boss fight. 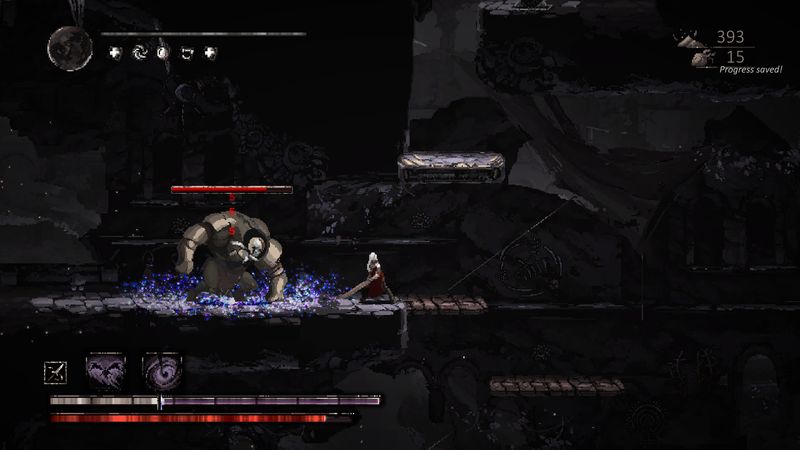 Beyond being armed with a beautifully animated melee move set, you also have access to witchery. Witcheries are magic based moves, that you can purchase and upgrade through a skill tree.

There are many to choose from, and you can have two equipped at any one time. I mostly opted for creating doppelgängers of Grey Irma, and an auto targeting projectile known as Chain Boulder, for airborne enemies.

My other favourite witchery, is named Wormhole, which when used appears on the ground, pulling enemies into a void while further damaging them over time, and then exploding.

Experimenting with these abilities and finding your favourites is good fun. Whilst some feel more powerful than others, all witcheries feel viable. 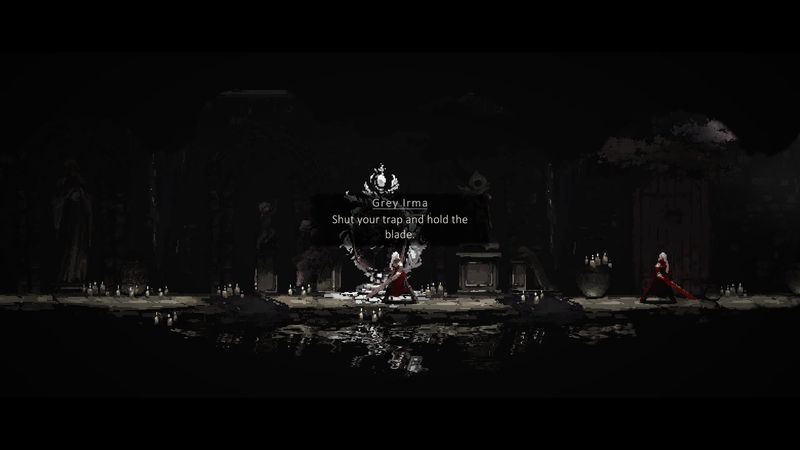 Using Witcheries consumes Ichor, which in the lore is a fluid that courses through humans, allowing them to use magic. You can also use Ichor to heal. Choosing what to use it for in the moment, can be the difference between success and failure.

Combining witchery with the melee combat, and special attacks, allows you to create a symphony of violence where Grey Irma is the orchestrator. Once you get the combat down, Grey Irma will glide across the gothic scenery with brutality and grace. 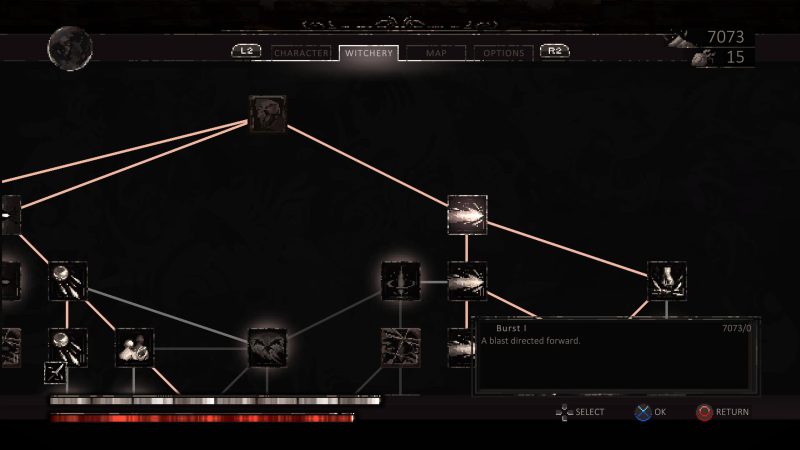 Moonscars offers a perk system known as amulet stones, which you can find within the world. You can equip any 3 at one time.

Some of these amulet stones will be consumed upon death, so using them at the right time is key. Certain amulet stones offer much more than others, such as being invulnerable whilst healing.

Much like every souls-like in existence, Moonscars has its souls currency equivalent in bone ash, which of course, are lost upon death. Naturally, there is also the opportunity to retrieve them. All of which feels very familiar at this point.

The currency itself can be used to buy witcheries, upgrade those witcheries, and purchase amulet stones at a mirror, or within the workshop. 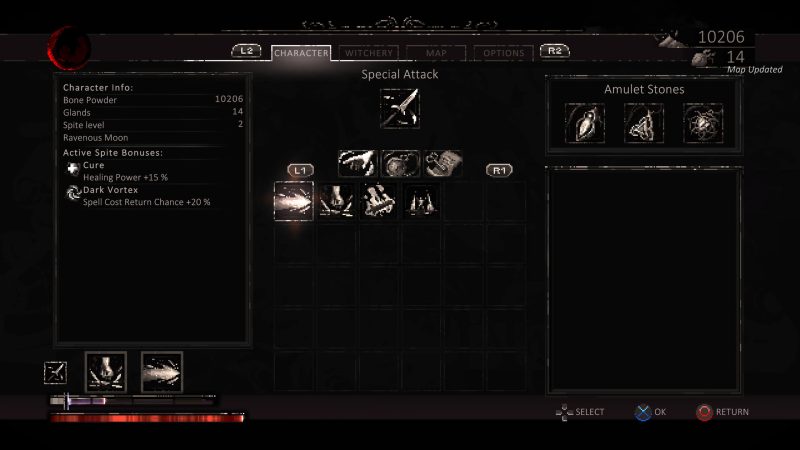 Another consumable item, are ichor glands. These glands, are more finite, and can be used to change your special without having to do battle with your past self.

Having said that, you might want to hang onto those glands. When you die, the moon becomes vengeful, and the game gets more difficult.

During this state, enemies will take more damage, and deal more damage. Offering a ichor gland to the moon in sacrifice, in what is called a moon rite. This will satiate its hunger for one life, so use them wisely. 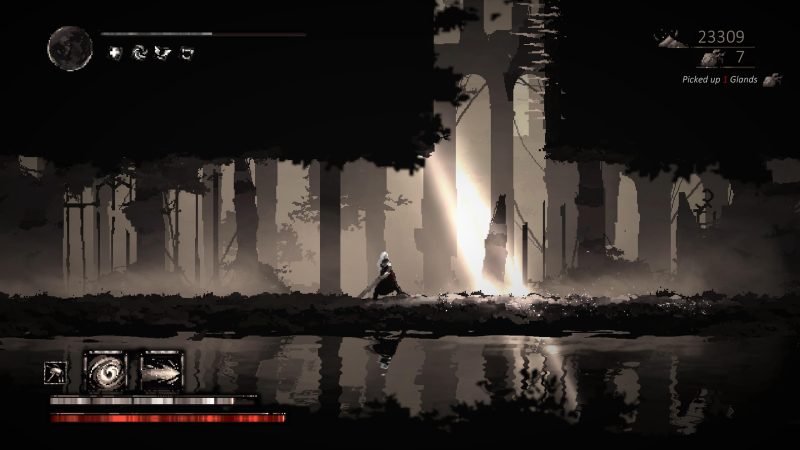 The world of Moonscars is stunning. Throughout the game, the areas are quite muted in colour, mostly accentuating the reds within its palette. Especially noticeable when you see the blood of your enemies scatter across the often monochromatic environment.

Something that really stood out to me, was a use of reflections within the water. Whilst reflections cannot be seen in the mirrors, which is not just a subtle detail in its environment, but perhaps thematically as well.

An area that really caught my attention, was the depths. The Depths, located south-west of the map, uses light in the background to create a more silhouette-like appearance in the foreground, and it really makes for some beautiful environmental design.

Enemies within Moonscars are equally well designed, offering variety and visual cues, to assist in learning how you might need to approach each fight. The clay soldiers with the smiling faced shields were my favourite in terms of design. Equally as memorable as they are creepy. 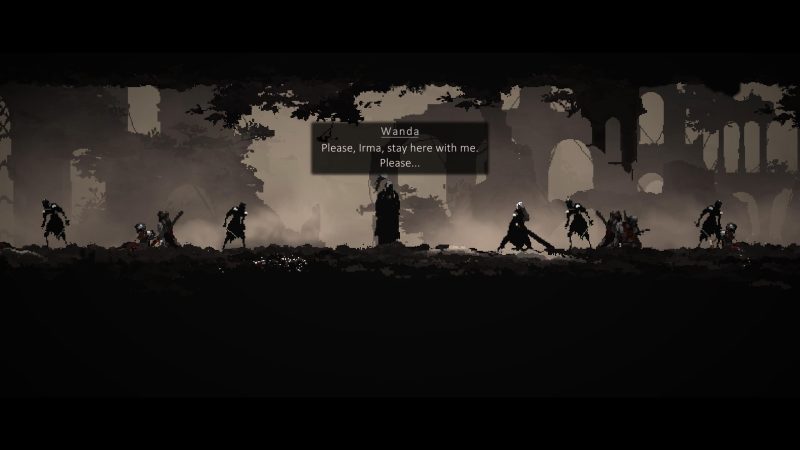 Moonscars has a soundtrack that is perfectly tailored, with its gothic and eerie ambience, befitting of its environment. Its use of choir vocals adds another layer to its wonderfully captured audio.

The colour palette, the soundtrack, the gothic landscape, uniquely designed characters, and creepy enemies, makes for a suitably dark and atmospheric world. Many of these aspects combine and create a feeling of oppressive solitude, which goes a long way in the souls-like genre.

Throw in those slick animations, and you’ve got a recipe for one of the most aesthetically pleasing games of the year.

When it comes to replay value, it will mostly come down to cleaning up some side quests and some trophy hunting. The moment to moment challenge will likely put some people off, especially once they’ve finished Moonscars.

Whilst 2D souls-likes and souls-likes in general have become more and more common, its becoming increasingly more difficult to standout, and whilst the fail state system is familiar, every other aspect comes together to make Moonscars a standout example of its genre.

Combining its masterfully executed aesthetic and world, with its visceral and responsive skill based combat, makes Moonscars a must play.

Moonscars is out for PS5 and PS4

Moonscars is a standout example of what a 2D souls-like should be. From its beautifully atmospheric world, exceptional animations, to its fluid and gratifying combat, makes Moonscars an absolute pleasure to play. A best in class 2D souls-like.