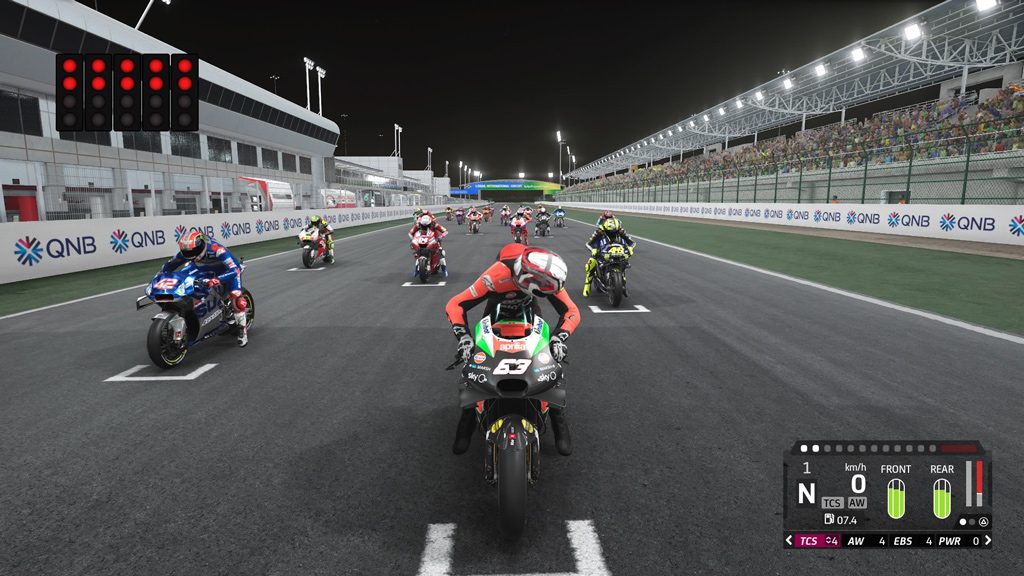 It’s an unfortunate and little known statistic, but around two thirds of male MotoGP riders suffer from chronic impotence. The relentless punishment dealt out to the perineum and the scrotum throughout the racing season is akin to a repeated pummelling from a smouldering cricket bat to the soft nethers of our on-track heroes.

So with the cancellation of the 2020 season for the foreseeable future, there’s a palpable sense of relief from the riders who can be forgiven for temporarily relinquishing their Sudocrem and Viagra. However while the riders are busy ‘having it off’, disappointed fans will be pleased to know that Milestone‘s 10th iteration of the MotoGP license is their best yet. But is their best good enough?

For anyone new to the series, MotoGP 20 presents the full complement of 2020 riders, teams and bikes from MotoGP, Moto 2 and Moto 3 with the usual emphasis on simulation rather than arcade. You can choose to work your way up through the rookie classes to the big league of MotoGP or simply dive in with the big machines. The Managerial aspect returns from an older iteration, enabling you to employ a handpicked team of employees such as Personal Manager, Chief Engineer, Data Analyst and others to help develop both your career and your bike.

Technical improvements from 2019 include tire management, new damage physics, 60 fps (on PS4 Pro), brake management, a new lighting system and brand new asphalt. The graphics editor has been overhauled and enables you to kit out your rider and bike in the most glorious leathers and the prettiest paintwork respectively.

To wrap up the potted press release, the Historical Mode returns with a host of challenges for those who love to step into the past and imagine their moustache and sideburns bristling in the wind.

Another Year Another Dollar

Depending on how you look at it, there’s a lot of new meat on the bike frame for fans and newbies alike, or there’s a bunch of token additions to justify the yearly release and the vast sum paid by Milestone for the privilege of holding the license.

The key to a top racing game is not all the bells and whistles dangling off the front end, but how exciting the actual racing experience is. How immersive is it? Does the sensation of speed exhilarate and terrify you at the same time? Well we’ll come to that shortly. The clear and colourful main menu offers up Career, Multiplayer, Quick Modes (leading to bespoke Championships or single races and time trials), Historical Mode (60+ bite sized challenges of increasing difficulty) and the Customisation option where you can experiment with the souped up livery tools.

The Career offers up a rudimentary selection of male and female heads to choose from before you choose your first Personal Manager from a small selection. From here you then choose which championship to start with and your first constructor’s contract before getting stuck in to the first race. The race weekend has numerous Free Practice sessions and two Qualifying sessions before the race – fortunately you can pick and choose which of these you want to participate in.

When The Going Gets Tough

Anyone new to the MotoGP series will shortly be making use of the R1 (rewind) feature as your rider face-plants the tarmac / gravel / rear-end of other riders. Even with all the driver aids turned on full and the AI slider on 20%, anticipating the corners in advance and being judicious with the accelerator will take some getting used to. Persevere though and it will soon become instinctive and satisfying as you nail the racing line. Unfortunately, the driver aids render you rather sluggish so you’ll need to adjust the sliders once you know what you’re doing to approach the friskiness of the pack.

If you can’t muster the good few hours of commitment getting used to the steep learning curve, it’s easy to feel like MotoGP 20 is impenetrable and deeply frustrating. A tutorial for beginners would ease the pain so perhaps Milestone can add this to their to-do list for 2021.

As the championship progresses, you’ll earn credits and reputation from your team (providing you hit your targets) and with these you can employ new engineers to develop your two-wheeled stallion during the season.

It’s difficult to feel that the managerial/developmental elements aren’t tacked on to bulk out the package as I felt disinclined to investigate much further than working my way down the obvious development path. Perhaps more avid fans will enjoy this aspect along with the livery editor but I can personally do without wandering around menus between races. Milestone are simply following the licensed racing game norm which Codemasters and Kylotonn adhere to, so one can only assume this additional administration is of interest. Next year we’ll be emptying the bins and making the coffee as well.

How Does It Feel To Feel?

To come back to the all important question, how does it feel? Well, the bikes feel reassuringly heavy and there’s some difference between manufacturers’ machines on track which is always a boon. The ‘Neural AI’ is good enough to give the impression that you’re not racing bots on rails and when the game informs you of a crash somewhere else on track, it reinforces this.

Cornering eventually feels smooth and second nature once you learn the circuits and the lead in times for each corner and the force-feedback helps to immerse the player, although a slider to increase the effect would have been welcome. View points available are two third-person ‘Hang-on‘ style options which are probably best suited to beginners, followed by three first-person rider options for purists.

However, the latter three are particularly strange as the horizon remains predominantly horizontal and unless I’m very mistaken, MotoGP riders don’t keep their heads perfectly vertical on corners. In fact on the majority of corners which require full lean, their viewpoint tilts considerably with their body. As a result of this anomaly, I found the first-person cameras extremely odd, suggesting the riders head was floating above the bike on corners.

The biggest issue which prevented me from becoming enamoured with MotoGP 20 was the sedentary pace of the racing. Even topping 300 kph, it never felt like I was riding one of the fastest vehicles in competitive sport. The corners often felt like I was pottering around on a Vespa and it was only when I was launched from the bike during an accident that any sense of velocity was apparent.

A quick blast on TT Isle of Man: Ride on the edge 2 and F1 2019 confirmed my suspicions, as both of these games manage to simulate incredible speeds with a combination of graphics, camera shake and force-feedback. The 60 fps performance on PS4 Pro will either solve or exacerbate this issue but excitement is sorely lacking.

It has to be said that on track, the bikes and riders look superb and a quick roam around with Photo Mode will show just how much detail has been lavished upon the field of racers. Zooming in on the bike chain is enough to confirm this, and the way the riders move in action (all with different riding styles) shows that Milestone have done their homework and are enjoying themselves.

Unfortunately the rest of the visuals aren’t entirely inspiring: the tracks are functional but basic and at times don’t look dissimilar to the PS3 edition of MotoGP, while the dead-eyed humans manage to add an unintentional shot of horror to the grid walk and podium celebrations. Even Codemasters haven’t managed to overcome this problem though, and Milestone are presumably working on a much smaller budget.

The menu and load-screen audio is nicely sparse, and the bike engine noises are no doubt as painfully unpleasant as they sound during the races.

Should I Buy This?

The improvements implemented by Milestone since last year are all steps forward and there’s a vast amount of challenge built into the Career and Historical Mode options for hardcore MotoGP fans to sink their teeth into.

Casual players who occasionally enjoy racing games should possibly steer clear however. While you can begin to master the riding style and nuances required to succeed and beat the pack with five or six hours play, the racing experience never manages to evoke much excitement and therefore it’s hardly a compulsive experience.

Kudos should be given to Milestone for completing this game on time, given that they are based in Lombardia, the area most affected by the Coronavirus outbreak in the whole of Europe. Buon lavoro, ragazzi!

MotoGP 20 is out now on PS4, Xbox One, PC and Nintendo Switch.

Never quite impressing on any level, MotoGP 20 offers up an enthusiastic licensed release, which will please fans of the sport and motorcycle lovers but may fail to inspire everyone else. A less sterile approach to simulating the sport with a more impressive feeling of speed would be enough to crown Milestone as kings and queens of MotoGP.