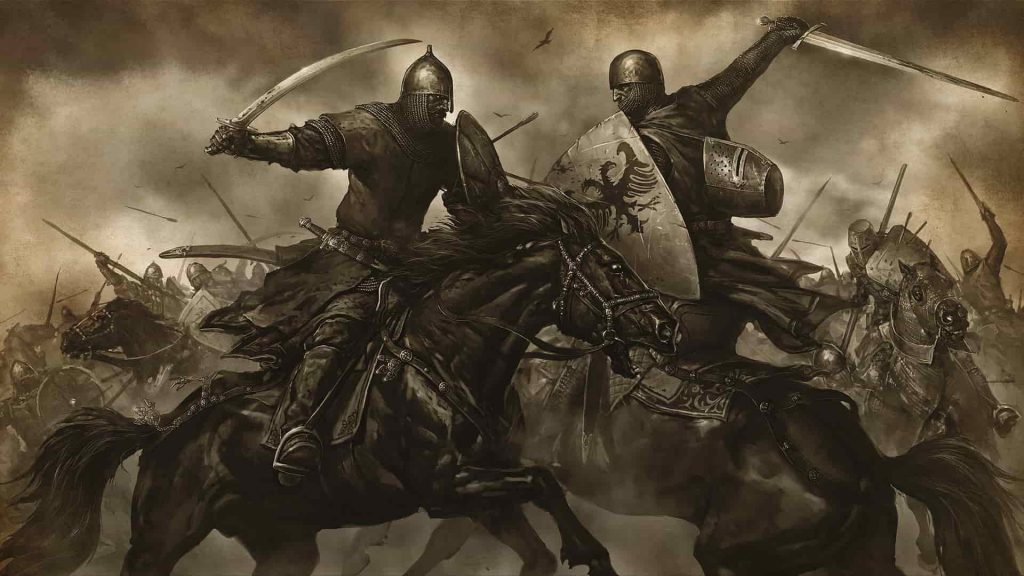 There is nothing quite like Mount and Blade Warband PS4. In the span of just ten hours, I raised an army from basically nothing, won a tournament, scored the affections of an upper crust lady, bought an oil and silk business and then had it all go to pot as a Viking army invaded, took me prisoner and whisked me to some far off land where I made my escape and subsequent grim living as a renown-less hobo in the arena.

Sounds fantastic doesn’t it? Well it really is but there is one, rather massive hurdle that might turn off a fair few folks; Mount and Blade: Warband looks like it was made over ten years ago for PC and then stuffed, somewhat uncomfortably, into a PS4-shaped hole. Simply put, there is no game which is as ambitious, and equally, no other which looks quite as dated either.

Technically leaves a lot to be desired

Let’s address the low-poly, jarringly animated elephant in the room first. With character models that look like they failed an audition for The Elder Scrolls: Morrowind back in 2001 (their facial expressions don’t change – ever) and when combined with geometrically simplistic world design, it’s fair to say that Mount and Blade: Warband isn’t really much of a looker at all. I will say this however; Warband does in fact trundle along at a rock-solid 60 FPS while maintaining a 1080p screen resolution and level of responsiveness to match, so it’s not all bad news from a visual perspective.

It’s not just the visual side of things that look like they’re misplaced out of time either; the UI is poorly optimised for PS4 too with the presence of an on-screen mouse cursor and lack of transitions between menu screens suggesting that the game was, probably quite literally, chucked into a conversion machine whereupon someone hurriedly pressed the big red version that said ‘Make PS4 Version’ and so here we are.

Beyond the visuals and the UI, the audio impresses but also simultaneously disappoints. You see, while the musical score is both appropriately epic and majestic for an effort such as this – that wades so deeply into medieval themed waters – there is no voice acting whatsoever; instead Warband relies upon walls of text as its primary mode of exposition, which not only feels dated but can be exasperating for the player too.

So from a technical perspective then, Mount and Blade: Warband clearly doesn’t fare so well, and yet it’s worth remembering that the Turkish developer behind the game is modestly sized to say the least. Furthermore, it’s also hard to feel too slighted by the bereft of technical excellence in Warband, since after all it retails at a budget price point (around $20 tops), rather than the full price of the AAA efforts that many folk will see fit to compare it to.

So really, you will either absolutely detest Warband for its clumsy UI and dated audiovisual presentation, or, you’ll be able to look past those failings and foster a love for its ambitious and compelling hybrid of strategy and combat elements. For those who feel capable of the latter, Mount and Blade: Warband is frequently a veritable embarrassment of entertaining riches.

Away from the straightforward thrills of multiplayer competitive combat and the Custom Battle mode which allows you to rig specific types of conflicts, the heart of Mount and Blade: Warband invariably lies in its ambitiously sprawling single-player campaign. Embracing a Dark Ages style setting where magic and horrible beasties doesn’t exist but angry dudes with a fetish for armor, horses and weapons do, the campaign in Mount and Blade: Warband casts you as a wayward soul who must fulfill their destiny against the backdrop of the eternally warring kingdom of Calradia.

As to what form that destiny is supposed to take, Warband casually posits that players should strive to be the ruler of Calradia and its kingdoms (a frankly mammoth task), but honestly much more entertaining mileage lay in carving out your own stories along the way in whatever fashion you choose.

From the get-go, this focus on player engineering is felt, as the character creator, while lacking in cosmetic flair, comes through in spades as it lets players tailor everything from the origins of their characters, through to their talents, abilities and more besides. Once your protagonist has been made and you find yourself tossed into the big wide world, you are immediately thrust into the heart of the Warband experience which is, to not put too fine a point on it, smashing iron things into the faces of other folk before they do it to you.

Taking place from either a first-person or third-person perspective, the medieval scrapping in Mount and Blade: Warband can seem sluggish and unpolished at first, but extended practice soon reveals a myriad of sophistications that exist beyond its rugged front. It’s easy to mistake such lethargy for a technical failing, but rather every strike in Warband is deliberate and each one has a lead time behind it which makes you appreciate the weight and heft of whatever face smashing implement you’re using.

One-handed swords, two-handed swords, axes, maces, staves, crossbows and thrown objects are just some of the weapons at your disposal, and rather than just pressing a generic attack button that farts out a standard animation, Warband instead demands that you explicitly specify the direction of attack you intend to make.

What this means is that certain strikes can be used to get around the guard of your opponents, where a left slashing blow can be used to exploit an opening where a shield doesn’t exist, so too does that logic work in reverse; with shields and weapons being used to protect parts of your anatomy that you might feel are vulnerable to an incoming attack. Layering the proceedings yet further is the fact that all of this can also be done from horseback, which introduces an additional dynamic since the power of your attacks is magnified owing to the increased speed afforded to you.

Another aspect to consider is that horses and shields can be killed and broken respectively if they take too much abuse, forcing you to source replacements from the battlefield on the fly which can lead to some tremendously satisfying improvisation in the heat of combat. Certainly, the thrill of bearing witness to legions crash into each other with lance, shield, sword and axe is a practically inexhaustible one, as savage conflicts unfurl with almost peerless brutality.

If all this sounds a little overwhelming don’t fret; a well-constructed tutorial does a commendable job of teaching unfamiliar hands the ropes, neatly covering everything from shooting crossbows and using shields, to horseback archery and lance jousting. Notably though, it must be said that somewhat frequently I accidentally swapped between the first and third-person perspectives during play, something that felt all too easy to do, and somewhat frustratingly, seemed to occur a lot during the heat of battle which wasn’t ideal to say the least.

One of the finer and more clever things that Warband does is that it makes it impossible for the player to die. Sure, you can be imprisoned, lose your army, lose your lands and even get mugged for the shirt on your back, but you can never be killed and so this lack of a true fail state means you can get back on the path to glory (or ruin, again) without delay.

A proper Game of Thrones

Sitting atop Warband’s penchant for intimate violence is the frankly massive strategy and role-playing metagame that gives the single-player campaign such long legs. Rather than putting a cap on your ambitions, Warband instead works to the contrary and lets you do and become basically anything you like, as the consequences from your actions ripple out into the world at large and become immediately noticeable in the smallest of ways.

You could choose to be a commodities trader, a mercenary who hunts down deserters, a Littlefinger type character who undermines the rule of kings, a general who lays siege to castles or even declare your vassalship to a lord and fight in one of Warband’s many, continent-spanning conflicts.

In each and every case, whatever you do is keenly felt; spare a lord after defeating his army and he’ll remember that act of mercy the next time the tables are turned, while sacrificing some of your warband so you can make your escape in an outmatched encounter, will spread word of your misdeeds to more honorable types who will refuse to deal with you. Elsewhere, not being able to pay or feed your warband will lower their morale, eventually causing them to depart from your company. Here, “he/she will remember that” actually means something.

A big driving force behind these stories is the fact that the entire continent of Calradia, is one massive dynamic entity, and it’s something that you absolutely need to pay constant attention to. Truces for example, can routinely occur between nations, opening up trade opportunities and relationships with your betters, while the scuppering of them can result in being attacked in lands that were previously not hostile to you (see my initial tale of woe at the top of the Mount and Blade: Warband review).

Such dynamism also encompasses a full-blown and fully fledged economy as well, since not only can you set up a business, such as a blacksmith or even a bakery, but certain regions have different commodities to offer and, depending on your actions, can be pushed to economic prosperity or ruin depending on how you play the market. Add in arena gladiatorial contests, jousting tournaments, a full character progression system and even the ability to learn poetry(!) to name just a few of the activities you can get up to, and it’s no exaggeration to say that Warband easily boasts more ambition than many of its fuller price, bigger budget brethren can lay claim to.

Mount and Blade: Warband is a tactical treat on PS4

A proper, developed from the ground up for PS4 (and PS4 Pro!) Mount & Blade title would be a tremendously formidable offering, and for the record, the forthcoming Mount and Blade II: Bannerlord is shaping up wonderfully. As it is though, we’ll just have to make do with this technically archaic offering that has more depth in its first hour of play, than most games have across whole franchises.

Even now, as I’m writing this review in the early grim hours, all I want to do is go back to my warband and lead them to glory against a camp of entrenched bandits, so that I can take all their gear and strengthen my forces yet further still, and if that isn’t a ringing endorsement, I’m not sure what is.

So that score that you can see below, comes with a Brock Lesnar sized caveat; you’ll either hate it and plummet that score a fair few points, or, you’ll embrace the ambition which lay behind the jankiness and stick one on top. Either way, there’s nothing quite like Mount and Blade: Warband on PS4 and for that fact alone, it should be celebrated.

Developed by Taleworlds Interactive and published by Ravenscourt, Mount and Blade Warband is out now on PS4, Xbox One and PC.

A true curio in the most literal sense, Mount and Blade: Warband will sharply divide PS4 players according to the premium that they place on aesthetics. For those who can look past such failings though, hundreds upon hundreds of hours of play awaits with a game that combines medieval combat, strategy and role-playing quite unlike any other. Just don’t stare at it eh? It’s rude.