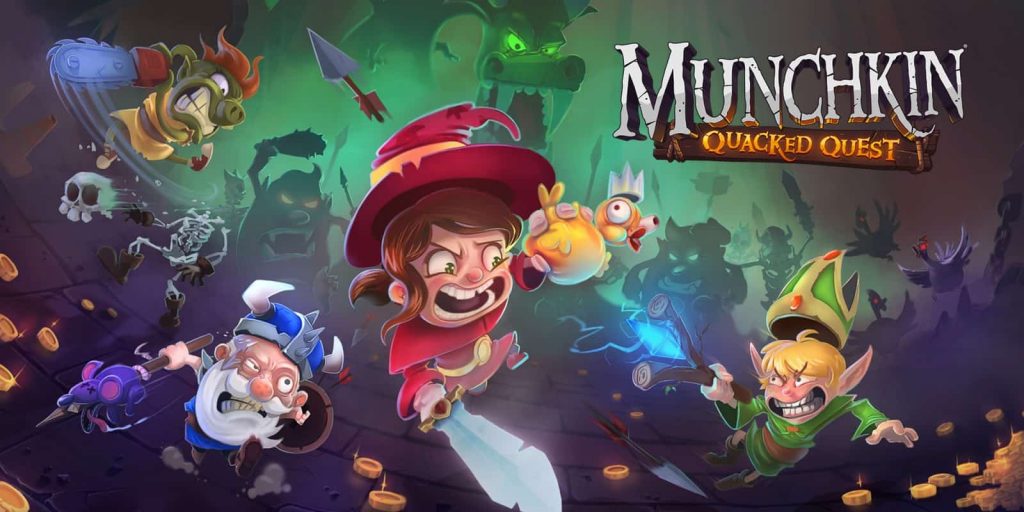 If you’ve ever played a session of Steve Jackson’s Munchkin card game, you’ll know that its deftly designed rapid-fire sessions are both hugely fun and breathtakingly easy to return to. Of course, this being a time where just about every board and card game ever ends up being adapted into a video game, we’ve now ended up with Munchkin: Quacked Quest, a somewhat limited (though occasionally charming) take on the dungeon crawler template.

Munchkin: Quacked Quest is a relatively straightforward take on the well-travelled, top-down dungeon crawler template. As one of a combination fantasy races and classes, including the likes of a Dwarven Wizard, an Orc Priest and more besides, you’ll balance out strengths and weaknesses accordingly – a Dwarf will have more health, an Elf will move quicker and so on, and so forth.

Once a group of four warriors has been assembled (AI folks will step in to fill the spots should you find yourself light on the friend count), Muchkin’s mischievous side begins to emerge as each session is preceded by the reveal of four different cards that affect various parameters of the dungeon delving shenanigans that you’re about to embark on. Because these cards are randomly drawn and can affect the game in a number of ways, with new ones unlocked after every playthrough, each session with Munchkin: Quacked Quest feels subtly different from the last, with different enemies, objectives and more.

All of this dovetails neatly into the overall objective that Munchkin prescribes its players – to ‘win’, you must end up with the most levels by the end of the session and levels are gained by completing a set of randomly generated objectives that constitute each round. Somewhat disappointingly, Munchkin soon becomes repetitive; even when you’ve unlocked a whole bunch of cards – and this is primarily due to a frustratingly lack of different objective types.

Simply, if you’re not smashing up as many enemies as possible, you’re in a race to nab a toy duckling (don’t worry – I have no idea either) before any of the other warriors are able in order to gain those precious levels – and that’s pretty much it for the most part. Providing some deviation to the proceedings is the fact that in addition to randomised layouts, modifiers, traps and enemies, boss fights occasionally appear. However, rather than just awarding a level to the player who lands the fatal blow, players can instead only be the victor here if they do the most damage to these towering fiends.

Where Munchkin is arguably at its best is when it turns player against player in a more direct fashion, with some levels demanding players knock each other off into pits and into traps, with the player who accrues the most kills being awarded with, yep, you guessed it, a precious level. On that note, somewhat interestingly, death isn’t much of an obstacle to success during the game, and can ironically actually prove to be a boon as in death you are able to temporarily float through solid walls and doors for a few seconds before you come back to life.

Muchkin’s greatest failing however, is that its hack and slash fundamentals just aren’t that solid. Or enjoyable. For a start, there isn’t much variance or challenge in the enemies and most of them can be vanquished pretty easily, not least because they are, on the whole, massively stupid types that are quire happy to charge toward you over and over with reckless abandon until they fall down dead.

Though various weapons, armor, potions and other such trinkets can be looted during the game, combat just doesn’t feel satisfying. Betwixt the sluggish movement of the player characters, the aforementioned dumb-as-rocks bad guys and the almost total lack of satisfying heft and worthwhile special abilities, it’s clear that Munchkin needs a great deal of tightening up in this regard. Diablo, this is not.

In something of a deft twist that serves to freshen up the whole affair a bit, Munchkin surprises somewhat at the end of each session, awarding bonus levels for a variety of traditionally non-meritous criteria such as number of doors broken down and even number of times died, for example. That said, it’s still not enough to keep players going over the long term simply because the variety of objectives and baseline combat offering are both so lacking and repetitious.

There are other issues too. Though the game is generously stuffed with a great deal of fourth wall breaking charm thanks to an energetic narrator, crashes happen a little too often more than they should and the framerate finds itself struggling under the weight of busier scenes. Another notable and significant flaw, and this is one which directly impacts the core appeal of Munchkin: Quacked Quest, is the fact that the best aspect of its experience – arguably its multiplayer functionality, can only be enjoyed locally. It’s simply a baffling omission that harms the game greatly.

In the end, Munchkin: Quacked Quest is something of a shadow of the legendary card game with which it shares a name. Though some elements are present from Steve Jackson’s classic game, such as the parameter changing cards and the sense of humor, just about everything else feels painfully mediocre and the game hardly makes a compelling case for itself as the next genre effort that hack and slash fiends should hop onto next.

Munchkin: Quacked Quest is out now on PS4, Xbox One, Nintendo Switch and PC.

Munchkin: Quacked quest is certainly a colorful and charming dungeon crawler. Sadly, uninspiring hack and slash fundamentals and a lack of variety conspire to drag down what is otherwise a fairly charming and occasionally enjoyable offering that is best enjoyed with friends.