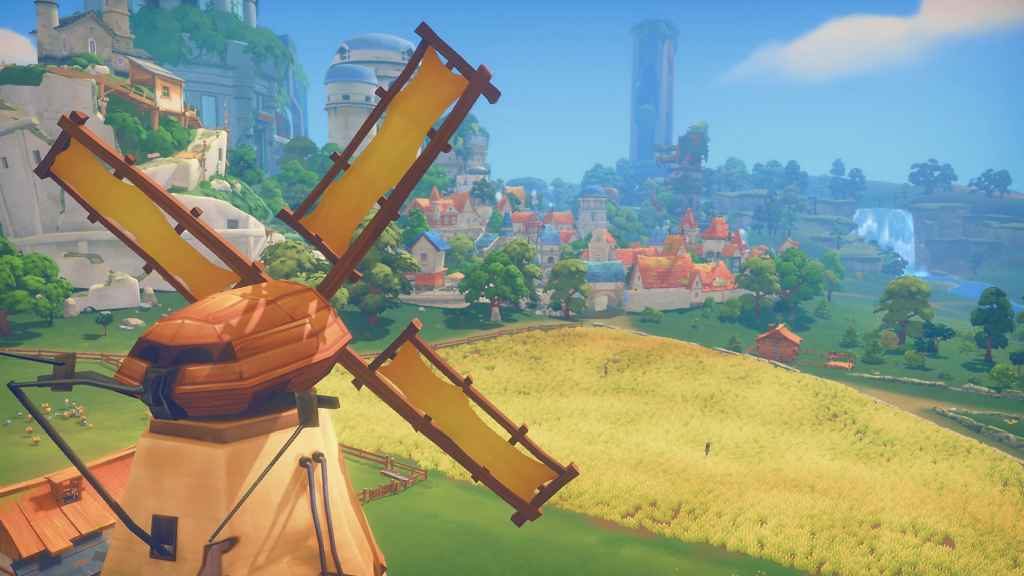 Games like My Time at Portia possess an almost irresistible appeal.

In an industry flush with 50-hour RPG epics and big-budget shooters, having the opportunity to sit back and relax in a world in which the fate of its citizens doesn’t hinge on the player’s ability to defeat an army of monsters controlled by a semi-divine supervillain is a real treat.

Judged against these criteria alone, My Time at Portia is a rip-roaring success. Few places offer quite so charming and wholesome a setting as the titular town.

Unfortunately, from a gameplay perspective, the infernal grind that lies at the heart of the experience, along with one or two other notable issues, prevents My Time at Portia from crossing that symbolic line in the sand that separates the good games from the truly great.

Welcome to Portia – A Post-Apocalyptic Paradise

Set in a world still feeling the effects of a planet-wide catastrophe some three or four centuries prior, My Time at Portia tells the story of the game’s customisable protagonist who, having recently inherited his/her absent father’s workshop, decides to make a go of it in the country.

Upon arriving, the protagonist quickly establishes themselves as part of the wider community, undertaking various commissions for the typically diverse and welcoming cast of characters who, by and large, are quick to accept him/her as one of their own.

While it’s hard not to develop a soft spot for the residents of Portia – even Higgins, the arrogant and obnoxious master builder who is less than thrilled to see another competitor roll into town – it’s the world itself which provides the biggest lure.

Though not quite as large as some other games in the genre (many of the buildings in the town of Portia itself, such as the café on the Western wall, are completely inaccessible; mere set dressing providing only the illusion of depth), there are still plenty of sights to be seen and secrets to be uncovered.

All rendered in an understated yet endearing art style and accompanied by a wonderfully soothing soundtrack that enables it to stand shoulder to shoulder with its peers in the genre as a textbook example of the restful, Arcadian paradise gamers love to inhabit. One in which hard work pays off, people judge an individual on their own merits, and the importance of finding a balance between nature and technological development is recognised by all.

Grinding to a Halt

As enjoyable as simply inhabiting this world is, the protagonist isn’t in Portia for a holiday. He/she has a number of objectives to complete. These include revitalising their father’s dilapidated workshop, undertaking a series of increasingly complicated projects in order to earn “Rep Points” and take the crown of the town’s top builder, and embedding themselves in the local community.

The problem is that, whichever of these goals the player decides to prioritise, the sheer amount of time and raw materials required to make any kind of headway in any of these areas prevents My Time at Portia from establishing any kind of rhythm.

Admittedly, given the variety of resources available to the player and the impressive array of items that can be crafted using them, they can expect to enjoy plenty of creative freedom. Equally, there’s a pronounced feeling of satisfaction to be gained from gradually assembling the game’s more complex objects and fulfilling the miscellaneous requests distributed (either in person or through the Commerce Guild) by the townsfolk.

Nevertheless, the time-consuming nature of all but the most basic commissions – even after the player’s unlocked some of the various abilities locked away in the RPG-esque skill tree – coupled with the fact that story missions are dispensed one at a time and at pre-determined intervals, I can’t help but feel that a considerable percentage of players will have grown tired of this protracted gameplay loop before they’ve discovered even a fraction of what My Time at Portia has to offer.

Farming, Combat, and Other Pursuits

Thankfully, as is typical in this type of game, there is a wide array of things to do outside of the main story.

Farming, both cultivating crops and raising animals, is probably the most significant. It’s not particularly complex – especially when compared to the building mechanics. But it does provide a welcome dose of variety and, more importantly from a practical perspective, can be rather profitable. Fishing, though certainly relaxing, is similarly rudimentary.

Interacting and developing relationships with the people of Portia, on the other hand, is a lot of fun. Not only is it slightly less convoluted than other such games, it possesses a degree of intricacy and variety that actively encourages players to pursue it.

The same cannot be said for combat, however.

Clunky, tedious, wildly inconsistent in terms of collision detection, and almost entirely reliant upon the player’s button mashing proficiency, combat feels like an afterthought. Included in the game out of necessity, rather than any real desire to incorporate it into the wider experience.

A handful of minor performance issues certainly doesn’t help matters. Dropped frames and staggered character animations only serve to make it even more trying. As such, combat offers nothing more than a temporary (and usually exasperating) distraction from the main story.

A Game of Contrasts

When all’s said and done, My Time at Portia is a game of contrasts.

The world itself captures much of what makes the rural idyll so enticing to gamers, but lacks depth. Its core mechanics, though commendable for their complexity and intuitiveness, struggle to convince players to stick around for the long haul due to the game’s interminably slow pace.

Consequently, My Time at Portia feels like a game geared towards those who are already fans of the genre. Those who are in the market for something quiet and relaxing, but don’t have the time to pour dozens upon dozens of hours into a single game, in other words, may need to look elsewhere.

Developed by Pathea Games, our review copy of My Time at Portia was provided by publisher Team17.

A gorgeous, atmospheric, and relaxing world chock full of things to do, My Time at Portia ultimately falls frustratingly short of its potential due to some serious pacing issues and an overall lack of mechanical polish.

My Time At Portia