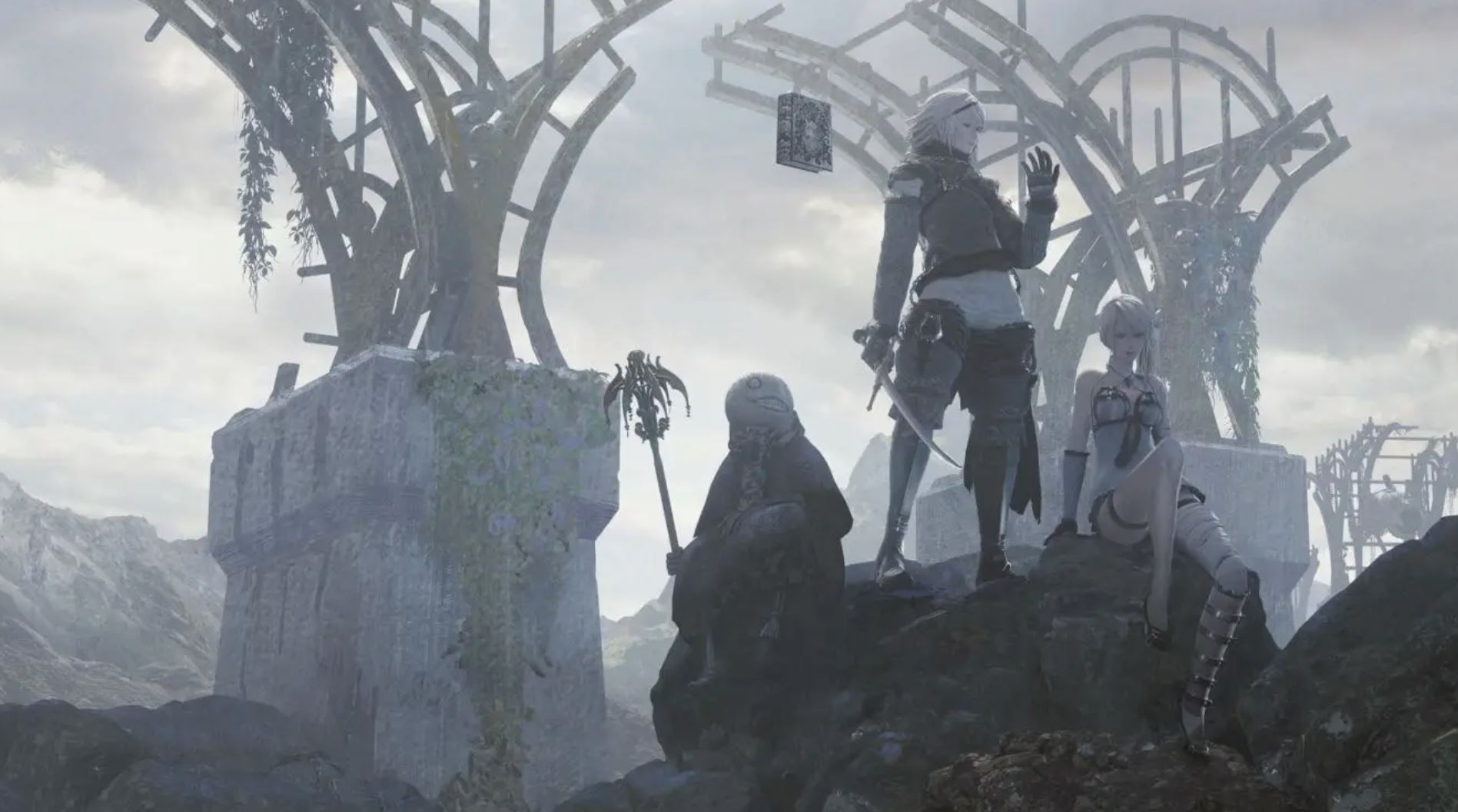 NieR Replicant Review (PS4)– When NieR was originally released back on the PlayStation 3, it was universally a hit-and-miss title. It was praised for its fantastic story, writing, and incredible soundtrack. Most people hated its combat, which felt stiff, and the characters played as if they weighed a ton, and worst of all, it was mostly unresponsive.

Fast forward a few years, and NieR Automata releases to high praise and great success, spurring Square Enix to give the franchise more recognition. That recognition comes in the form of an updated version of NeiR: Replicant, which is a thorough improvement on the original game in almost every way.

An Incredible Story That Pulls On All You’re Emotional Strings

What is NeiR: Replicant, though? Replicant was originally released only in Japan while the west received what was later dubbed NieR: Gestalt. Those who played the PS3 title may wonder what the difference between the two titles is. Well, there is only one: the main protagonist.

NieR’s story was universally praised for its dark themes that hit close to home and painting a bleak world that may not have a good ending. It was a story of love, happiness, and loss. Much like Automata after it, players are in for some blows that leave them with gut-wrenching decisions to make that don’t have a positive resolution and that includes the game’s multiple endings. 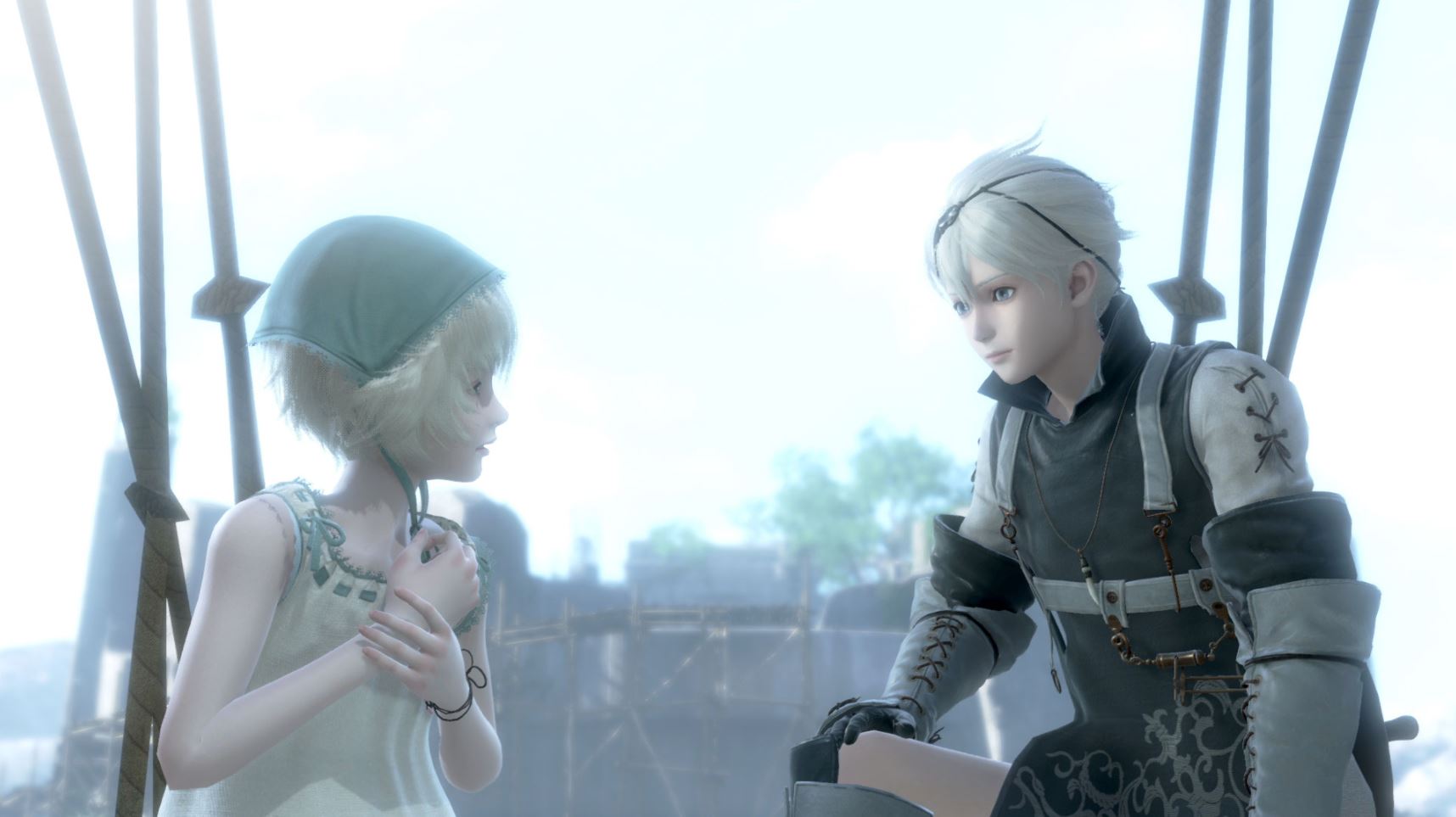 Our main protagonist isn’t alone on his journey and comes across some allies that join him on his quest. Kanie: a foul-mouthed monster killing machine who herself is infected with the Black Scrawl. Emil: A little boy who can turn organic material into stone by looking at it. Last but not least, there is Grimoire Weiss: a magical talking book. Weiss takes centre stage in the story and is the key to curing the Black Scrawl. It just doesn’t really know how to. You can’t switch between any of the allies you come across but there are sections in the game where you get to play as them for story purposes.

The world of NeiR is a post-apocalyptic one and humanity is on its last legs. Some humans have built shelters and live in various towns, and it’s these towns where you have to gather information on how to cure the Black Scrawl while taking care of the townsfolk’s needs.

There are a lot of side-quests to tackle. Unfortunately, most of these are fetch quests. Find a specific item or kill a certain enemy and return and report your success to the quest giver. Though most of these quests can be quite boring to get through, some of them will net you great rewards such as new weapons and items that grant access to new locations. Even a whole ending is tied to how many quests you manage to complete. 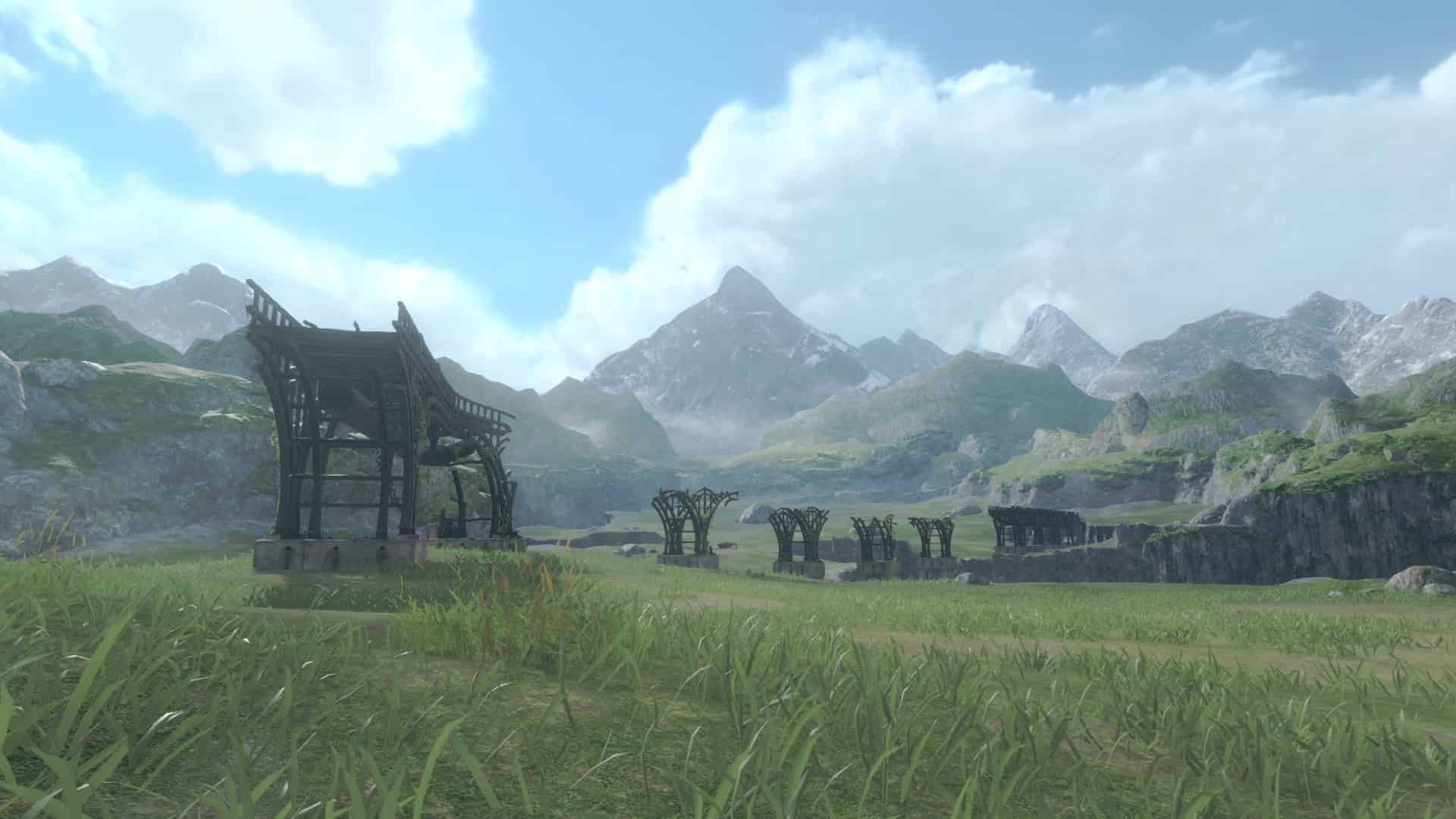 The main protagonist’s village is where most of the story quests come from. Each location in Replicant is a small-sized open location for you to explore. A nice grassy field, a junk heap, and a desert area are just some locations you’ll visit.

Each location features wildlife to hunt for materials, gathering points for metals, fishing spots, and the game’s main enemies to take down, the Shade. The open locations are easy to transverse, but the amount of Shade that appears can get frustrating, especially in the second half of the game. I couldn’t go two minutes without being attacked by ten to fifteen Shade at once, and they weren’t exactly quick and easy encounters.

Unfortunately, one of Replicant’s worst mistakes is the amount of back-tracking it requires and it’s particularly prevalent when it comes to the side-quests. 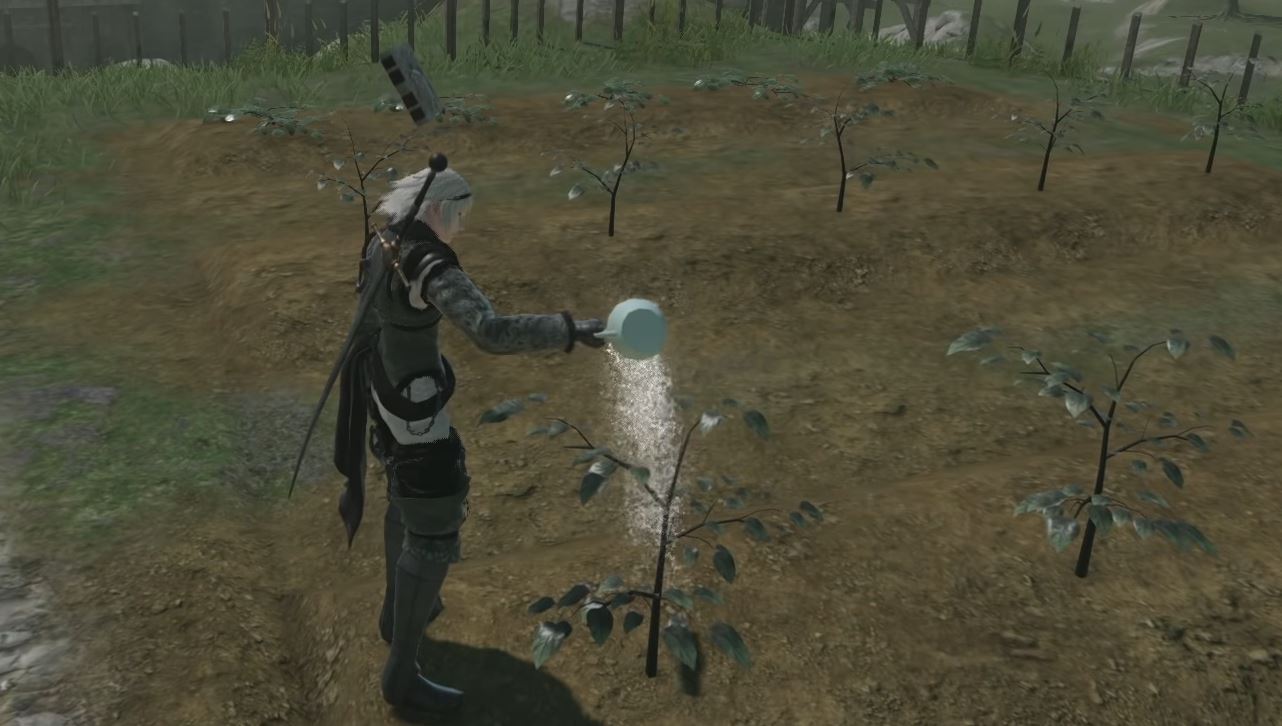 You do unlock fast travel in the way of a boat in the second half of the game, but it’s barebones at best. Most of the locations where you get dropped by the boat are in the starting locations of each region which is just a ten-second run away from your hub town, which is located in the centre of the game world. It actually takes longer to get to the boat in your village than it takes to just run where you need to go.

The combat is the major overhaul the game has received in this updated version of Replicant. Though it’s not on the same level as Automata, Replicant’s combat has received some much-needed overhaul. No longer does it feel stiff and unresponsive. It’s fast, fluid, and damn fun. If you played Automata, you should be right at home with Replicant as the mechanics are the same.

Deflecting attacks right as they strike you is satisfying to perform, as is dodging an attack and watching the protagonist shift behind his opponents for a quick backslash. Though the combat is greatly improved, it does suffer from a few issues still. The main one is switching weapons and even healing during combat. Replicant allows you to switch weapons with the touch of a button but instead of instantly switching to a different weapon the game opens up a menu to have you switch.

The same thing happens when you try and heal. The game again takes you to a menu to select your healing item. It would have been nice to have a quick menu that allowed me to preset two or three items to use on the fly instead of opening up a menu all the time. 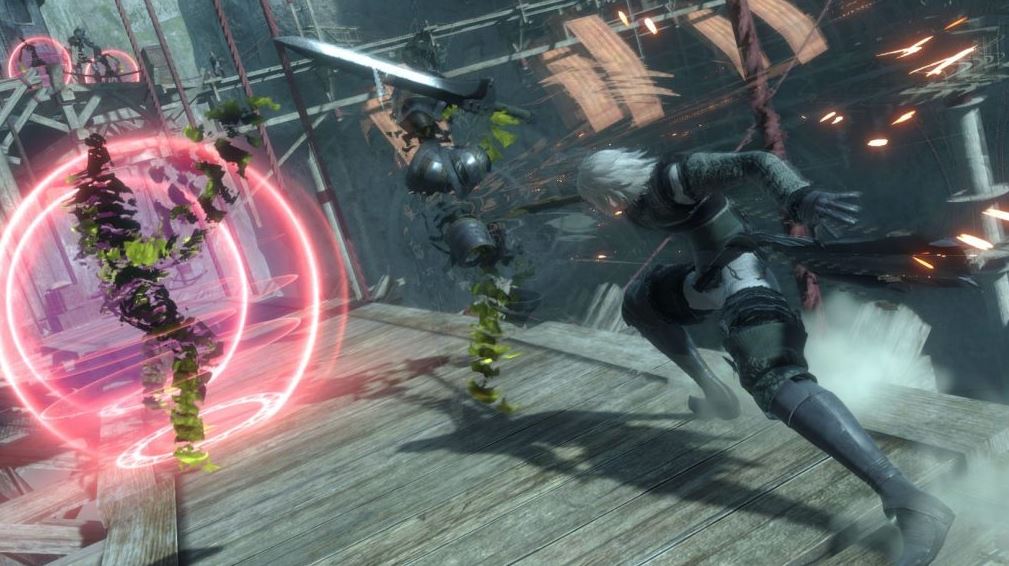 Outside of the melee combat, Grimoire Weiss acts like the little droid from Automata. It provides magic support for the protagonist, and you can even customize it with different attacks. I personally used Weiss as a long-range attacker with an energy blast and spears to launch at enemies. You can also utilize it for melee combat; more importantly, it’s great for crowd control with some of the attacks you unlock later on.

The Spirit Of NieR Lives On In This Remake

An interesting mechanic to NieR’s combat is its Word system. This system allows you to learn passive abilities to equip on your weapons and Grimoire Weiss. By defeating Shades, you’ll unlock Words that can increase your physical damage by a certain percentage or increase your item drop rate to get the rarer items required to upgrade your weapons. It’s not the most intuitive system, but it’s a nice addition to customize your weapons outside of just upgrading them to hit harder.

Where the game’s combat truly shines is in its boss battles. Each boss fight is massive in scale and each one also works like a puzzle while also handicapping you. It’s not just about attacking your enemy. One boss has you dodging energy attacks as if you’re playing a bullet hell shooter while another stops your physical attacks from being effective, forcing you to rely on magic attacks.

Much like Automata, Replicant isn’t just a third-person action game. You’ll find yourself in side-scrolling action sections and, in some cases, a full-on text adventure. Yoko Taro’s use of different game genres is unique and isn’t done nearly enough in the industry. He does a great job of keeping you engaged, while keeping the experience fresh. 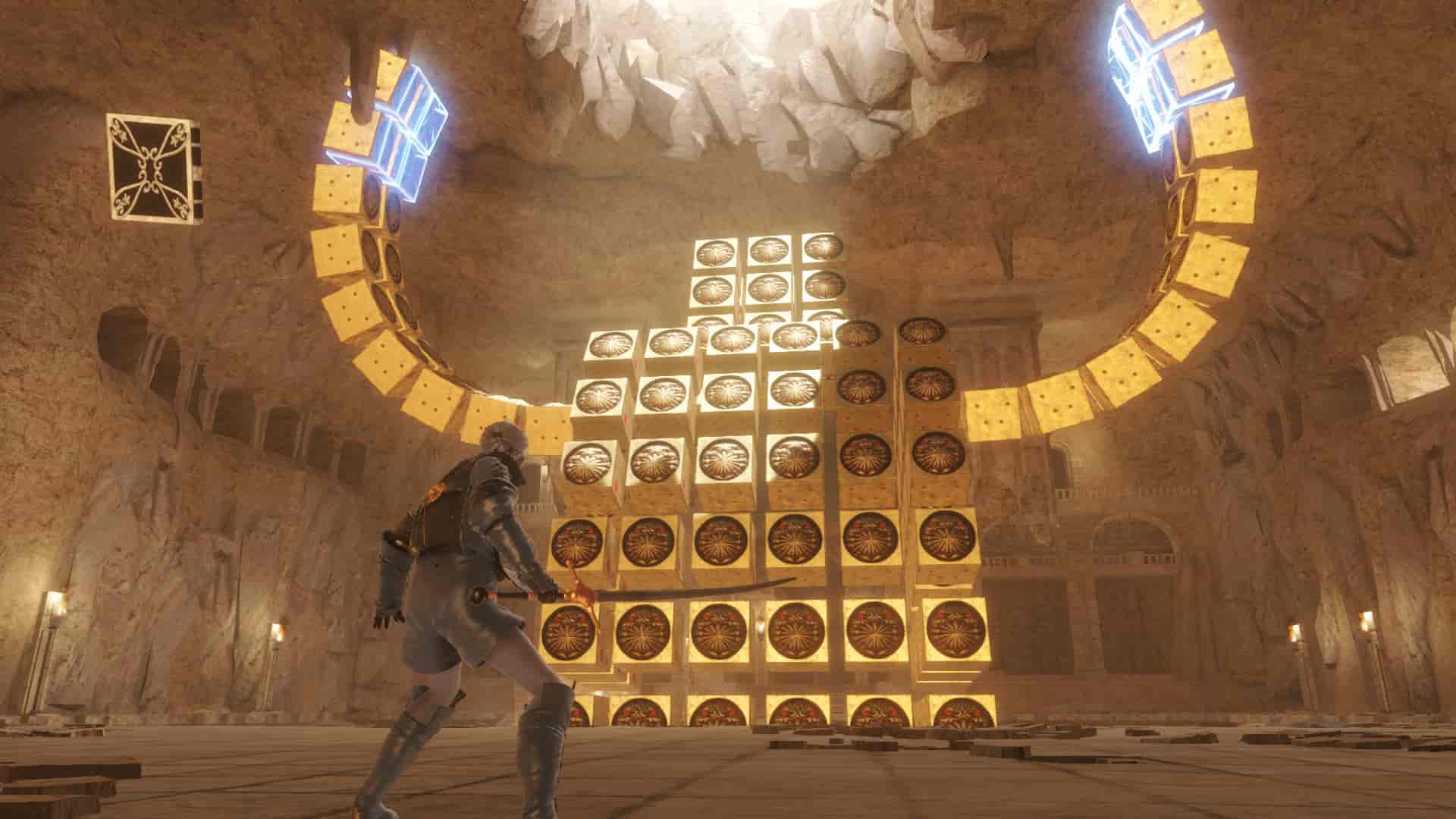 Replicant’s sound design is probably one of the best I’ve ever experienced and the game’s soundtrack is just on another level. Every song is memorable. I found myself just stopping in the middle of the world to appreciate the music. Voice work is also top-notch and is complemented by the game’s great writing.

Visually the game got a nice upgrade from the PS3, but it’s not anything mind-blowing either. The main characters look good, but the world still looks like a late gen PS3 title. I wish a little more were put into the game’s visual upgrade, but it’s still a decent-looking game.

Another Chance For A Game You Absolutely Should Play

NieR: Replicant is another chance to jump into the crazy mind of Yoko Taro and experience a fantastic world filled with memorable characters. Replicant’s story is gut-wrenching at times and hopeful in others. Though Replicant is an updated port, it is improved enough to make it feel like a brand new experience. Replicant is a “can’t miss” experience for fans who may have only played NieR Automata, but for me personally, it’s a game that no one should miss.

NieR: Replicant releases on April 23rd, 2021 for PS4 and is playable on PS5 via backward compatability

The NieR franchise has easily become one of my favorites. After NieR Automata, my need to replay the original NieR grew and grew, and thankfully, Square Enix has answered my prayers for an updated version of the original title. NieR: Replicant tells a fantastic story that's carried by great writing and a soundtrack that stops you in your tracks to listen to its incredible melodies. The only thing that holds Replicant back from true greatness is its old-school take on fetch quests and the horribly constant backtracking.