The events that took place after my review diary entries were too numerous, and often too repetitious to document in such detailed fashion that I decided it was time to summarise the journey I’d had so far a little more concisely and stick a score on it. It totally wasn’t anything to do with me getting sidetracked by the game, honest.

Since you last heard from me, I’ve been to a whole lot of star systems, met strange alien races, annoyed one of them for a while, battled space pirates, befriended aliens with butt-shaped heads, discovered black holes, and literally had my head messed with in the search for that Atlas nonsense. All this done with the grace, courage, and finesse of Arnold Judas Rimmer. It’s been quite the ride, but the only thing anyone really wants to hear is if it was worth it. To that I offer you a yes and no answer, with all the caveats associated with that. 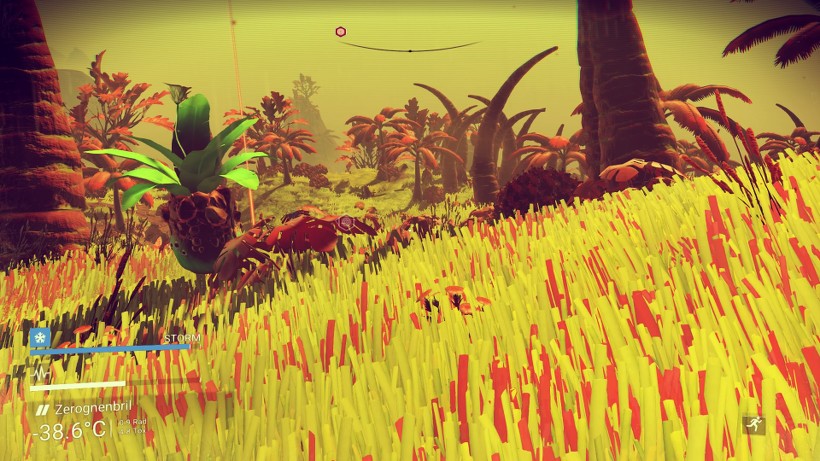 Cards on the table, straight up opinion on my 40 plus hours in No Man’s Sky? I’ve enjoyed it immensely for large stretches, and see myself coming back for a couple of hours at a time for a while yet. This is not a game to be rushed, which is of course, a struggle to avoid with reviews. Still, I went at my own pace, gave some first impressions in the form of review diaries, and probably came out feeling more positive for it than I might have if I’d quickened the pace.

Let’s get the negatives out of the way first shall we? The first one being the very nature of the game itself. Sure, there’s much to love for many, and I’ve no doubt that there will be a fanbase, myself included, for the game in the months, and potentially, years to come. What is clear however, is that this is an acquired taste, and one that will continue to be heavily divisive in future discussions. Any number of No Man’s Sky’s elements could be the reason why anyone might like/detest/grow bored of/adore it. The survival aspect is a big one for example. The whole crafting to live sub-genre is already well played out thanks to its core ideas now bleeding into all sorts of games. As a result, too much of it can be a drag, especially if your preferred style of play is hampered by the systems put in place. 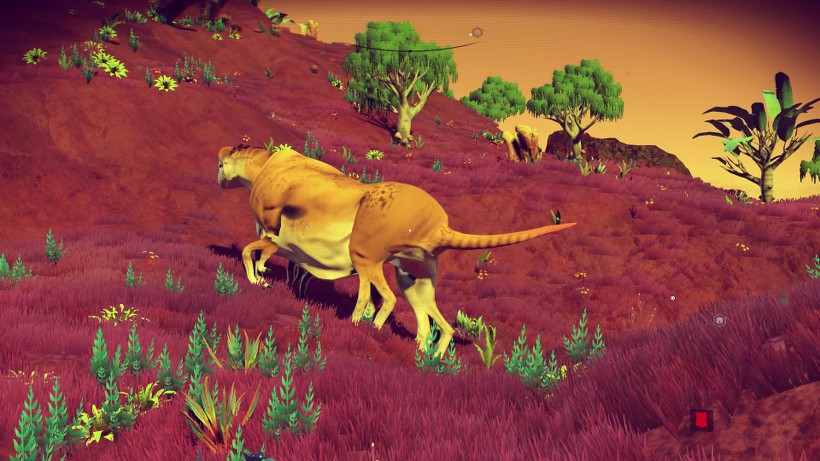 While I personally felt No Man’s Sky placed only a light hand on the survival itself, with staying alive being relatively simple, the resource-gathering becomes a little too much of the game if you want to do anything except explore. Even then it’s an important part of getting anywhere and making the upgrades needed to rename every planet in the galaxy after the casts of 90’s sitcoms to do your exploration justice. So until you earn enough cash to buy more inventory slots/a bigger ship, then you must go resource-grabbing quite a lot, and that, quite understandably, can feel like a drag when you’ve played countless games that ask the same. I’m still fairly tolerant of resource-grabbing, but even I felt the grind on occasion when I’d much rather be doing anything else in game.

The thing is, that the survival game aspect is so prominent because everything else is a bit limited without it there to connect the different gameplay threads. Exploration is my favorite part of No Man’s Sky by far, but you can’t deny that the things you are doing and the stuff you’re gawping at come from a particularly shallow pool. Outposts, trading stations, and the like are pretty uniform in design and interaction, spiced up only slightly by alien conversations, and monoliths and ruins suffer the same. Planet design has some variance, but there’s a disappointing air of familiarity to them after you’ve seen a dozen or so (though that’s not to say there aren’t still surprises and moments of wonder, they just become less prevalent). The creatures are the most varied sight, with some genuinely hilarious and odd beings showing up hours and hours after you think you’ve seen it all (personal fave was a group of giant sentient pineapples bouncing along all super happy). There are still plenty of iterations of the same ideas of course, but the smallest touches can change a similar-looking beast into something wonderfully ridiculous. 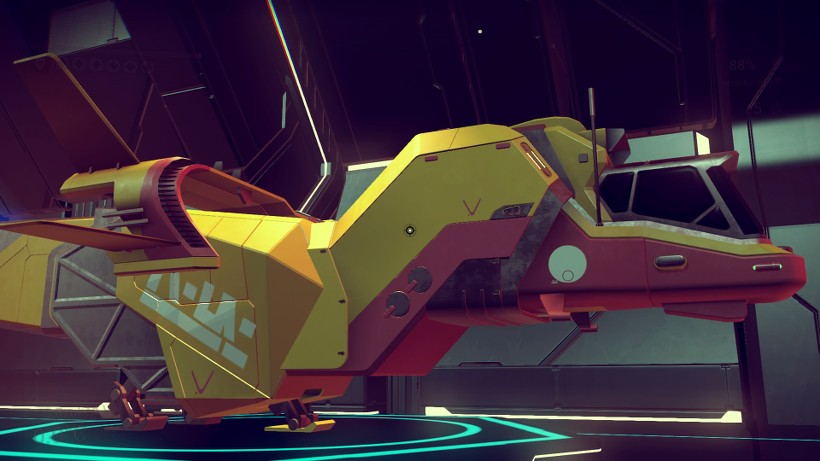 Combat is fun once you get to grips with it in space battles, though the initial learning experience is unwieldy. On the planet surfaces however, there’s little impact to it. It’s almost always better to have upgraded your multi-tool to include explosive projectiles to dispatch with angry beasts and tetchy Sentinels as the regular Boltblaster lacks the fluidity and punch you’d hope for in gun combat. Avoidance ends up being the preferred method for planet-based encounters

I can completely understand why any and all of that would color a person’s enjoyment of No Man’s Sky. When you throw in some technical hiccups (which are almost always when the game is getting stretched) then there’s valid reason to see low scores and derogatory opinions that extends beyond mere issues of hype. Yet there’s many out there who will really enjoy the things No Man’s Sky does well.

I remarked upon the game’s visual design being a big plus in my review diaries, and I stand by that. The use of bold, bright colors and pulp sci-fi novel influences give No Man’s Sky a strong front end. The UI may lift heavily from Destiny, but the game itself is consistently striking in spite of the deficiencies that do plague the game engine. Your journey is made more pleasurable by the frankly brilliant soundtrack by 65daysofstatic. Rarely has music managed to fit so comfortably with the very style of the game it’s connected to, but it’s definitely managed here with aplomb. 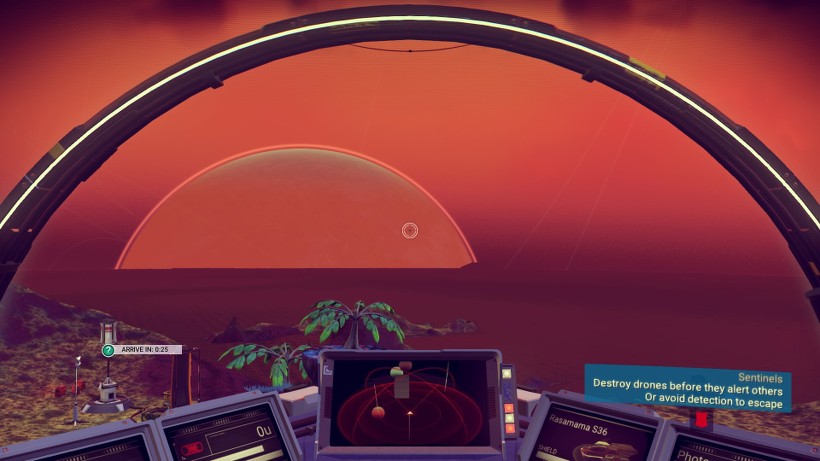 For all I wrote about the negatives of crafting and exploring, they are still pleasingly satisfying in a serene, passive manner. There’s little urgency in No Man’s Sky for the most part, and that really plays up to the idea of travelling the universe alone, seeking out a constant stream of personal discoveries. That’s well documented to be a turnoff for some, but when you have that fondness for exploration at your own pace, then No Man’s Sky is perfectly-placed to cater to your needs. The loop is one that you’ve experienced before, but the setting adds just enough to it to make it a pleasure.

The crafting/resource-scouring strength is as I’d mentioned before, to do with the lightness of the survival side allowing you to focus on collecting resources. There’s still a fairly hypnotic aura to the mechanic though, firing your mining tool and seeing the mineral goodness come your way becomes a much more pleasurable experience once your suit is upgraded sufficiently, and it’s nice to get a bit of challenge in trying to nab rare and expensive loot that sends the Sentinels into aggressive action. 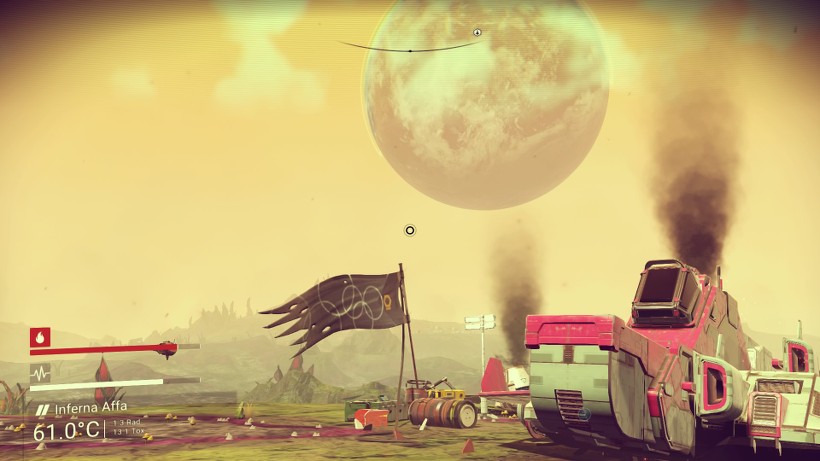 For all the repetition in No Man’s Sky’s design,there are some beautiful moments that stuck with me. Seeing and using a black hole for the first time, meeting the three alien races, the direction of some of the text-based choices and interactions, the discovery of abandoned outposts, and perhaps the best, following the Path of Atlas and all its bizarre subplots and imagery.

There’s a safeness to much of the game’s mechanics for sure, yet No Man’s Sky still manages to have moments of its very own that few games this generation have managed to do themselves. This isn’t the game to end all games that some hyped it up to be, but it is still something decidedly different in the swarm of games that get pushed to the high heavens by advertising campaigns. That undoubtedly means it will disappoint as many as it excites. There’s no denying that the technical achievement of Hello Game’s staggeringly big universe is impressive, but it needs to be fed new updates, upgrades, and content in the coming months in order to breathe fresh life into it. Otherwise there’s a good game that’s got enough flaws to it to ensure a lengthy shelf-life is not forthcoming for anyone but a rather niche community. However the future turns out for No Man’s Sky, it probably won’t avoid being divisive to the extreme.

It’s flawed in some fundamental, if fixable, ways, but No Man’s Sky has a dreamlike allure for those who can sink their teeth into its space-faring expanses. A memorable game, if not quite what it could be.