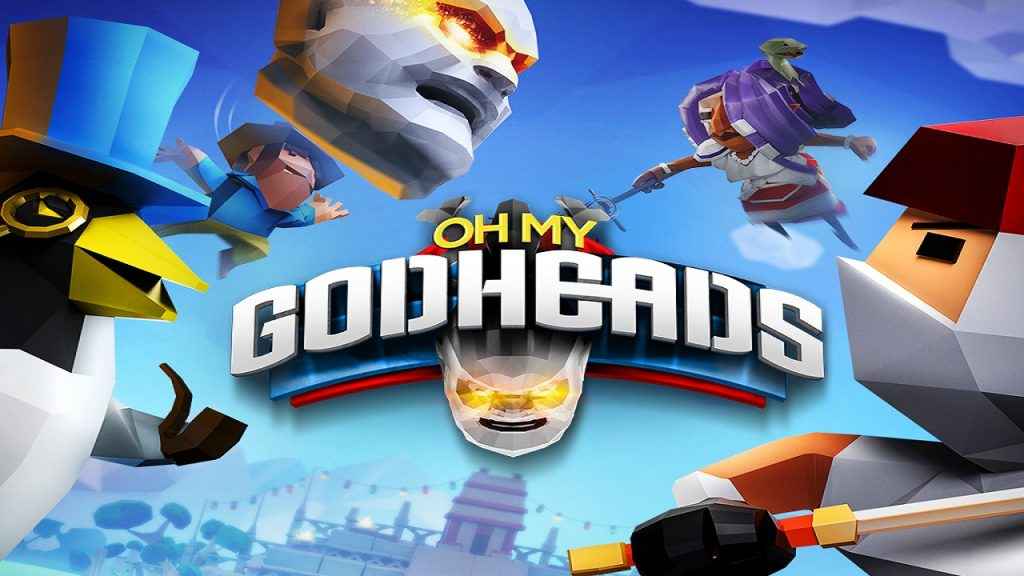 Oh My Godheads review code supplied by the publisher.

One of the biggest surprises during this generation of PlayStation has been the burgeoning local multiplayer scene that has sprung up around Sony's eighth generation home console. At the vanguard of this pioneering approach to resurrect the couch based multiplayer fun and shenanigans of yesteryear has been efforts such as Overcooked, Towerfall: Ascension and Lovers in a Dangerous Spacetime to name just a few.

The latest title to join these ranks is Oh My Godheads, a fast and furious affair where players must pick from an eclectic cast of skeletons, monocle-wearing penguins and more as they carve and smash each other up while attempting to nab the titular celestial noggins to win points for themselves or their team.

Supporting up to four players (with additional AI bots available to make up the numbers), Oh My Godheads brings five modes to the table; Capture the Head, King of the Head, Trial of the Gods, Headhunters and finally Last Man Standing. Of that selection, Capture the Head and King of the Head tap best into the essence of Oh My Godheads, which, to not put too fine a point on it, is all about carrying massive god heads around the place, causing mayhem and scoring points while your mates are frantically trying to do the same.

Viewed from a slanted, top-down perspective, in Capture the Head players must nab the noggin in question and bring it back to their goal. Where things get tricky, is that not only can both your team and members of the opposing side can kill each other with a variety of melee and ranged attacks (the latter includes such delights as exploding pies, for example), but the location of your goal can also shift from one area to the next, making each run different from the last.

Next up, King of the Head asks something different of the player; rather than having to ferry the head to a color-coded goal, this mode instead awards victory to whichever player can hold the head the longest all the while dodging attacks from other covetous players. In addition to your enemies, each of the seven stages that you scrap it out on boasts a number of different environmental hazards that can be avoided or used to your own advantage. Whether you're dealing with crushing Japanese waterfalls or Italian volcanoes, each of Oh My Godheads maps are as stuffed with colorful character as they are with innovative peril, and some of the best sessions you'll have are those where your fellow players succumb to the devious designs of these stages.

The kicker in both of these modes however, is that each of the god heads have different abilities which directly impact the result of each and every contest that they are in. From Shiva who can instantly freeze any players in her vicinity, to another god whose skull inverts the controls of the carrier to often hilarious end, each of the god heads really manage to keep the game interesting and allows Oh My Godheads to capture that same giddy, white-knuckle thrill that many of the best local multiplayer games have done previously.

Having local friends is a must for Oh My Godheads

When we come to the Headhunters and Last Man Standing modes however, things become a little less interesting. In Headhunters, the victor is the one with the most kills while Last Man Standing dishes out the top spot to the last player still standing. The problem is, without the frenetic objective based action of the King of the Head and Capture the Head modes, both of those aforementioned game types feel rather limp and trite by comparison as they hardly play to Oh My Godhead's strengths.

Finally, Trials of the Gods on the other hand, tests the player with a number of challenges which help to solidify an understanding of Oh My Godheads more nuanced aspects, but serves little other significant purpose than that. Ultimately, Oh my Godheads was clearly designed with local, social play in mind and it shows.

Though the single-player side of things boasts the aforementioned trials that can be completed and serve to double up as a neat tutorial for the game’s mechanics, the lone player will only be able to tangle with CPU controlled bots in Oh My Godheads other modes, with little else to do beyond that. As such, if you’re planning on tackling the game by yourself, Oh My Godheads cannot really be wholeheartedly recommended.

If there is one thing that the PS4 could always do with more of, its crazily offbeat couch based multiplayer titles like Oh My Godheads. Built almost exclusively to be enjoyed with friends, contests in Oh My Godheads frequently veer towards the maddeningly intense but never to have you grinning from ear to ear.

Though there isn't much for lone players to enjoy, Oh My Godhead’s vibrantly colorful presentation and offbeat cast (any game that has a skeleton called ‘Dave’ deserves bonus points), together make it a more than worthwhile entry in the PS4’s increasingly broadening pantheon of must-have local multiplayer games.

A sometimes limited but deliciously offbeat affair, Oh My Godheads joins the ever expanding roster of couch based multiplayer efforts on PS4 and can easily be recommended to those who can get the mates and the corresponding number of snacks/drinks in.