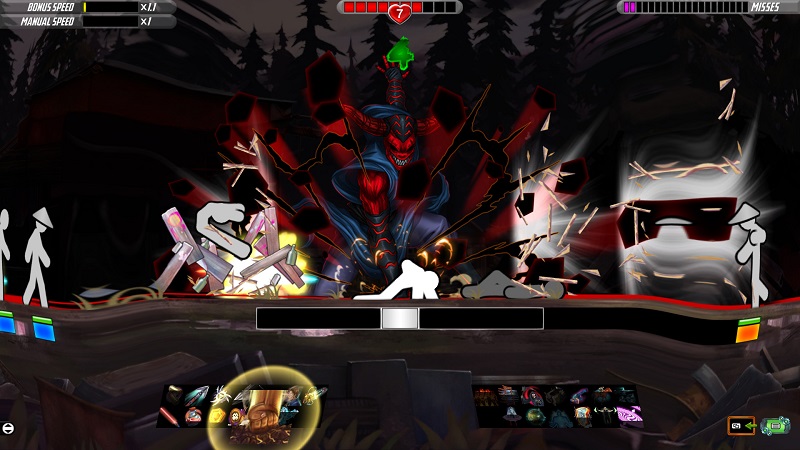 One Finger Death Punch 2 PS4 Review – One Finger Death Punch 2 holds something of a lofty and quite unexpected dual distinction. Not only is it the most intense brawler in the world, with hundreds of well-trained stickman goons surrounding you at once and attacking with all manner of combat styles and weapons, but it’s also the simplest too in so far as the entire sum of your offensive response is triggered entirely through just two buttons and nothing else.

A Bombastically Entertaining Rhythm Fighter With Surprising Depth To Spare

Peeling back that immediately gratifying veneer of stickman on stickman violence soon reveals that developer Silver Dollar Games has a much more ambitious trajectory planned, as a much deeper offering soon reveals itself that expertly straddles the simplistic and the sophisticated divide that One Finger Death Punch 2 embraces with an all-encompassing conviction.

The most reassuringly breezy of concepts to grasp, arguably one of One Finger Death Punch 2’s greatest strengths is the fact that just about anyone can pick up the controller and get stuck into the game’s fistic pursuits with very little preamble or introduction. Viewed from a side-on 2D perspective, all manner of stick-limbed enemies rush at the player from either the left or right side until their number has been exhausted and the stage is completed.

With the player unable to move, combat is accomplished through an intuitive two button solution where the square button attacks baddies to the left and the circle button lays waste to foes on the right. The key to success however, is that attacks will only land as and when enemies enter a specially designated range zone on either side of the player combatant, with failure to land strikes being penalised with misses that detract from your overall score and an accumulation of damage that can put your sticky savant in the ground if you aren’t careful.

The order of the day then is ultra-responsive, split-second reaction times and in this sense One Finger Death Punch 2 is much more akin to a rhythm style effort such as Guitar Hero or even the recent Sayonara Wild Hearts. Enabled by a firmly locked 60 frames per second screen update, Silver Dollar Games has ensured that the tech is up to the job and that if you fail, the soul-crushing embarrassment and sense of inferiority lay at your feet alone.

There’s a pleasing amount of depth here too. Aside from just battering an increasingly high number of angry stick-folk into the ground, you’ll note that there are multiple color variations of your enemies too. Much more than just a cosmetic indulgence, these different variations each possess a functional difference too – blue enemies will switch from one side of the screen to another when struck, while yellow enemies will take multiple hits before they gave up the stick-ghost for example.

Then there are the special enemies and boss fights too. The former thrust the player into a one on one fight within which a breakneck series of rhythmic buttons must be pressed to assure victory. The latter on the other hand, involve especially hardy enemies that switch color states and so provide a refreshingly dynamic challenge as a result.

Luckily, you’ve got more than just your fists and feet at your disposal to destroy the onrushing horde as all manner of weapons can also be nabbed and employed to speed up the carnage. From deadly swords and staves through to high calibre sniper rifles that can fell an entire row of enemies with a single shot, One Finger Death Punch 2 certainly provides players with no shortage of means to destroy their foes.

Ultimately though, it’s when One Finger Death Punch 2 settles into its murderous, kung fu rhythm that it permits the player to reach an extremely low level of brain to controller latency, as they zone in on every threat coming towards them. Whether that’s dodging a maelstrom of bullets, knives and other deadly projectiles, or headbutting a row of five dudes to death in just over a second, there’s arguably a well of mastery to be plumbed by higher level players – not least because when the game’s 26 skills are all enabled at once, the whole screen explodes into a veritable cornucopia of vividly colorful violence, too.

Speaking of which, these 26 skills provide quite the range of compelling progression systems, too. With skill tokens being unlocked for stellar performance, players can invest these tokens into unlocking weapon racks, clearing a whole side of enemies in one attack and much, much more besides.

Stylistically emerging from the great glut of smartly done stickman combat videos on YouTube, One Finger Death Punch 2’s visual presentation is both familiar and wonderfully bombastic. With well over a thousand different animations, it can be something of a breathtaking spectacle to watch as the player protagonist pulls off flying kicks, throws, punches, wrenches out hearts, rides horses into battle(!) and eye-lasers their foes into a bleeding mound of flesh.

More than anything, One Finger Death Punch 2’s 60 to 90 second encounters prove to be a welcome tonic in the current gaming landscape, not least because its ultra-quick skirmishes can be easily accommodated by even the busiest of schedules. Make no mistake also – One Finger Death Punch 2 provides more than ample bang for its buck. Retailing at just shy of nine bucks, One Finger Death Punch 2 not only includes a massive single player campaign, but also a range of additional survival modes to boot. Put simply, a small chunk of change gets you a whole lot of game.

Where One Finger Death Punch 2 comes a little unstuck is in the presentation of its menus and world map screens. Basic in the extreme and utterly lacking in the flair that defines the game elsewhere, it’s certainly fair to say that the presentation side of things is lacking to say the least.

Regardless of such minor tarnishes though, One Finger Death Punch 2 is an immensely enjoyable and distinctly moresome rhythm fighter that soars on account of just how much it does with so little. With its ultra budget price point, it’s amazing what you can do with two buttons, a mountain of stick men and enough violence to make Gareth Evans blush, isn’t it?

One Finger Death Punch 2 is out now on PS4.

Armed with its easily accessible two-button setup, One Finger Death Punch 2 stands as a sterling example of how to make the most out of an extraordinarily streamlined concept. More than that though, it's simply a hugely enjoyable and stylish rhythm fighter that does a grand job of keeping players coming back for more.