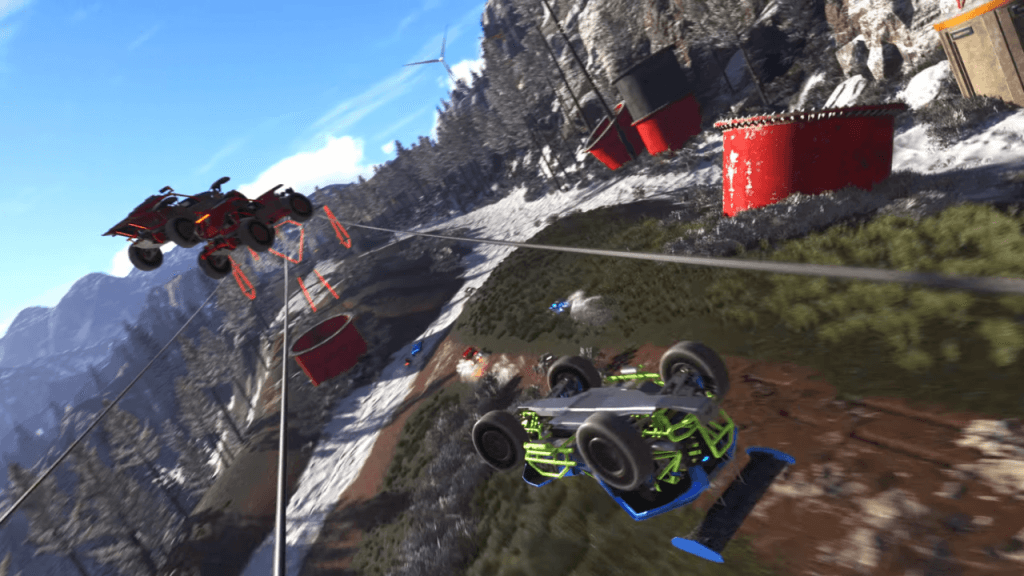 Codemasters is renowned for creating racing games of a more serious bent, but occasionally something will come up that’s a bit more arcade-orientated and over the top. Onrush, by a Codies team that includes many former Evolution Studios (DriveClub, Motorstorm) talents, is the latest example and it’s a vivid spectacle of arcade loveliness that eschews traditional racing for intriguing team-based shenanigans.

Rather than throw finish lines and time trials at you like most competitive vehicular-based titles, Onrush takes a leaf out of the modern team shooter handbook and has two sides working towards an ultimate goal in one of four modes. The result is one of the most refreshing and utterly entertaining spectacles to feature wheels.

This is a vibrant rollercoaster of vehicles smashing each other up at breakneck speed while a thumping, constantly remixing soundtrack booming in your ears. This is high-adrenaline arcade action that does its damnedest to keep you feeling the thrill of hurtling around in a hunk of metal at top speed at all times, only stopping to show you a gnarly crunch of metal when you get rammed by an arsehole in Dune Buggy.

Going into a bit more detail, Onrush has a sort of plot, charting the rise of an alternative vehicle-based sport that the game’s name is derived from. Two teams of drivers and riders go head to head in the four mode types in a battle for off-road supremacy. You can see a lot of Motorstorm’s legacy in Onrush, but it’s definitely a different beast. As noted previously, you can win, but only as a team, and the idea of a physical finish line is obsolete.

The first example of what Onrush does comes in the form of Overdrive. Here, players on each team must fling their vehicles ( bikes, buggies, muscle cars, and HumVee style trucks among the types) about the terrain, using jumps, aggressive jostling (read: smashing poor souls to pieces) and more to gain boost, that when used, racks up points for your team. Once a team reaches the score limit, they win.

With all modes, the track is littered with lesser A.I. controlled vehicles that you smash up easily. They serve as fodder to help ramp up your boost and in some cases, your score. It again is reminiscent of a trick used in a shooter (Titanfall), and it makes matches all the more chaotic and inviting as you have a near constant feed of destructive action, even when you’re not as involved as you’d like to be in the thick of it.

Another key aspect of each mode is taking out the opposition. The frenetic speed of Onrush means a twitch in the steering can be the difference between demolishing an unfortunate biker and smashing into a cliffside yourself. the temptation to take the opposition out of the game temporarily is high because those 10-20 seconds they’re out of it can and will decide where the points are heading at the end of a round. Heated rivalries can be born from a cheeky shunt, and again, Onrush applies an enticing part of the team shooter formula to cars by creating dynamic feuds and showmanship whilst working to help your teammates.

On to the other Onrush modes. Countdown has roots in old-school arcade racers, where you tried to keep racing against an ever-decreasing timer. has you trying to pass through checkpoints that add to your team’s overall timer. The competitive and strategic edge to this being, as mentioned before, take an opponent out of the game temporarily, and lessen their team’s chance of keeping the clock ticking.

Switch takes cues from Call of Duty’s Gun Game but with a twist. Everyone starts on motorcycles and every time someone crashes or is knocked flying by an opponent they move into the next vehicle class. The game ends when one team has used up all three of its ‘switches’. At the bike stage, you are more vulnerable, but your small size makes you tougher to hit, part of why Switch showcases the four vehicle classes and their individual abilities.

Each class has two choices. The bikes provide a nuisance factor, goading opponents into dangerous situations and nipping in to steal opportunities, but they do provide a lethality of their own. When vehicles use boost, it fills up a ‘Rush’ meter that activates that vehicles special ability. The first bike, Blade, for example, has a special called Firewall that leaves a white-hot stream of destructive energy trailing behind it. Any opponent caught in it is obliterated. The other bike, Outlaw, has a special that drains the boost of nearby opponents, which is obviously rather helpful when speed is of such great importance.

The other classes also work in a similar way to shooter classes, Bikes are the scout/sniper type, the buggy class is your all-rounder, the muscle cars are like engineers/medics and the Heavy ATVs are well…the heavy class. You certainly need balance to be right for these classes to be viable for all for modes, and for the most part, they are, as long as you use the vehicles correctly. The only mode they really slip with is in Lockdown.

Lockdown is a fine idea for a mode, and there’s nothing actually wrong with its concept. The teams jostle for position as they chase a large circular target at 100mph. If one team has more players in the circle for five unbroken seconds, they score a point. The winner is the first to get to six.

The problem with Lockdown comes from the vehicles themselves. The bigger boys struggle to keep pace, especially if they get knocked out of the running at any point. It means one or two crashes can leave the opposing team free to rack up multiple points before you’ve caught up. It’s also a bit of a bugger to play at night as you can’t see all that far. Throw in the weather effects and you can unfairly end up smashing into a wall all too often.

It also doesn’t do you any favors when occasionally the A.I. just doesn’t make the right calls. This is a team game, and winning by yourself is far from easy, but then, you shouldn’t have to.

Onrush Review: The Need for Speed (and Friends)

Otherwise, Onrush is just a splendid ball of mad and muddy joy. It’s a tad light on modes, and its campaign is easy to blaze through, but it feels like there’s a future to this game. There is a sturdy foundation and a frankly stupendous core to it. Of course, the online side will decide its fate.

The potential here is great, and early signs point to a highly competent online infrastructure. Getting matched up was obviously a bit hit and miss pre-launch but in the short time since a wider audience entered the fray, it’s been pretty smooth sailing, with matches loading up pretty swiftly.

Actually playing it’s been a different kettle of fish simply because like most team-based games, there’s always those who go for personal glory at the expense of the team objective. That, and it’s likely many don’t yet quite understand how Onrush works exactly. Luckily this is a relative minority, and playing against others is generally more exciting than facing bots.

Like all the best multiplayer experiences, team-based or not, Onrush is made for a bit of showing off, and there are few things sweeter than barrel-rolling through the air and landing smack-bang right on top of an opposing vehicle’s roof. You almost want them to have their mic on so you can hear the frustrated shouts of fury.

A lot depends on how well Onrush is supported in future, especially keeping on top of any balance issues. All the same, what you get day one is, for sheer entertainment value, well worth your money. Codemasters has borrowed from other competitive genres and applied it to its strongest suit (cars, of course), making something altogether new, whilst still having some much-needed familiarity.

While its future is not set in stone, what Onrush brings to the table right now is a highly refreshing take on team-based vehicular mayhem complete with vibrant visual flair and a thumping soundtrack.