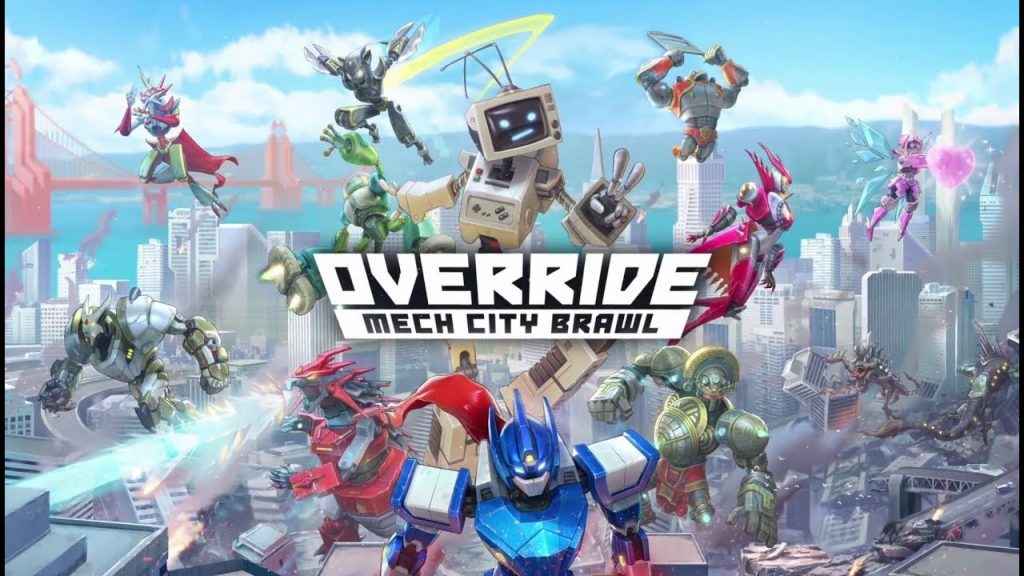 Override: Mech City Brawl can be a blast playing with friends. Battling each other in giant robots and watching the buildings around you crumble away is fun in short bursts, but it quickly overstays its welcome for various reasons.

There is a story in Mech City Brawl but it’s fairly uninspired as you join an organization that’s battling weird monsters that have appeared across the world. The monsters themselves look pretty cool, but the story missions are dreadfully boring.

Override: Mech City Brawl’s story is chore to get through

Each mission rewards you with either currency to upgrade your mech with various stats, or unlock mods that give your mech unique abilities like healing with each hit that you land.

These upgrades are pointless in the grand scheme of things; sure they help you get through the story, which isn’t hard to begin with, but they only apply to the story.

All the upgrades you add to your mech don’t carry over outside of the story. It just seems like it’s a wasted opportunity.

4 Player Brawl’s are a blast in Override: Mech City Brawl

Combat in Mech City Brawl is interesting. Each of your mech’s limbs are attached to one of the four shoulder buttons which means if you want to attack with your right arm and leg you have to tap wither the R1 or R2 buttons.

I loved this mechanic and it reminded of an old PS2 game called Robot Alchemic Drive which had a similar control scheme.

Your combos flow from the combination of buttons you press and you can even mix them up with special attacks. Special attacks are activated by holding down the square button and pressing one of the shoulder buttons to pull off some unique attacks.

There’s only so much you can do though before your mech either overheats from to many consecutive attacks or you run out of energy that uses your special abilities.

There are weapons that are littered throughout the map as well, but I found absolutely no use for these weapons as they hardly did any damage and limited your fighting capabilities.

The biggest problem with Mech City Brawl is content. There just isn’t enough. With fighting games releasing with twenty or so fighters and dozens and dozens of stages there just doesn’t seem like there’s enough of either.

However, each mech is unique with a unique set of abilities. Some are long range fighters, others are strong tank characters that don’t get phased by attacks.

As much as I enjoyed playing with all the mechs there is definitely some balancing issues that need to be worked out. Some fighters are just better then others and some ultimate moves can kill a fully healed mech in one attack if they can’t avoid the move.

There are plenty of mech color schemes to unlock for each mech too. You unlock them randomly but they unlock from simply battling in any of the modes. Win or lose, you unlock a new color scheme for a random mech.

Override: Mech City Brawl looks to have a short fuse

The actual multiplayer is reserved for playing with other players around the world. I never had any problems connecting to other players and the net code ran pretty well with no lag.

As far as game modes go there are only two. Free for all, which sees a four person brawl with every person for themselves, or a team brawl where you can create handicapped matches like three on one or two on two action.

Mech City Brawl is a good looking game, the mechs are well designed and the locations look pretty cool. On the negative side, the destruction of buildings could have been handled better. Simply walking through through buildings and watching them turn into small confetti really takes away from the destruction these mechs are causing.

Override: Mech City Brawl is a fun game, but its fun only lasts as long as your attention span will allow. There just isn’t enough content to go around. With a tacked on story mode that doesn’t add much of anything to the title – and the small roster of fighters and arenas – players may quickly move on.

Override: Mech City Brawl is as fun as your attention span will last. There just isn't enough content to keep players coming back for the long haul.