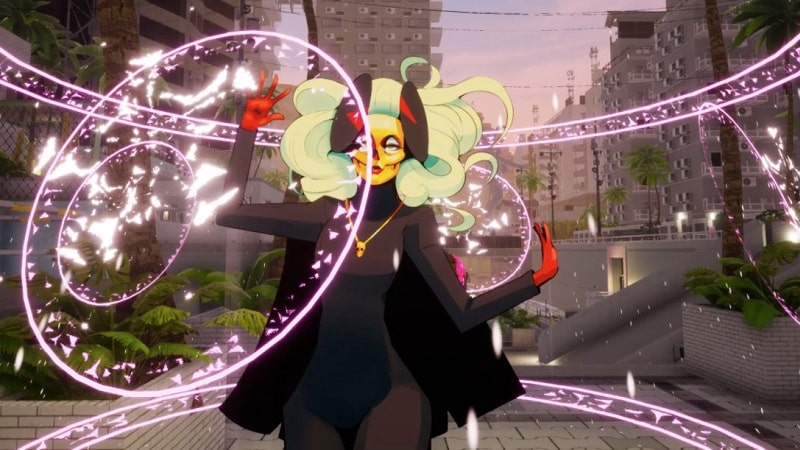 Paradise Killer PS5 review. I can guarantee that you have not played a detective adventure before quite like Paradise Killer. Unfolding on Paradise Island, a fantastically idyllic realm that exists outside the bounds of our known reality, players take control of sardonic and previously exiled investigator Lady Love Dies, seemingly the only detective that is uniquely equipped to solve a murder of the highest order that has occurred on the island. A delirious mish-mash of grey matter tickling procedural beats, esoteric world-building and vapourwave aesthetic, Paradise Killer stands head and shoulders above many of its genre stablemates in a way that feels both blissfully familiar and wonderfully surprising.

Playing out from an intimate first-person perspective, Paradise Killer follows many of the structured beats that one would expect from a detective yarn. You’ll cut about Paradise Island discovering clues, collecting testimonies and sorting evidence as you begin to build some sort of picture as to who the killer is. Certainly like any detective yarn that gets the whole sleuthing thing right, Paradise Killer feels hugely satisfying to say the least thanks in no small part to the sophistication that it applies to every aspect of its sleuthing mechanics. 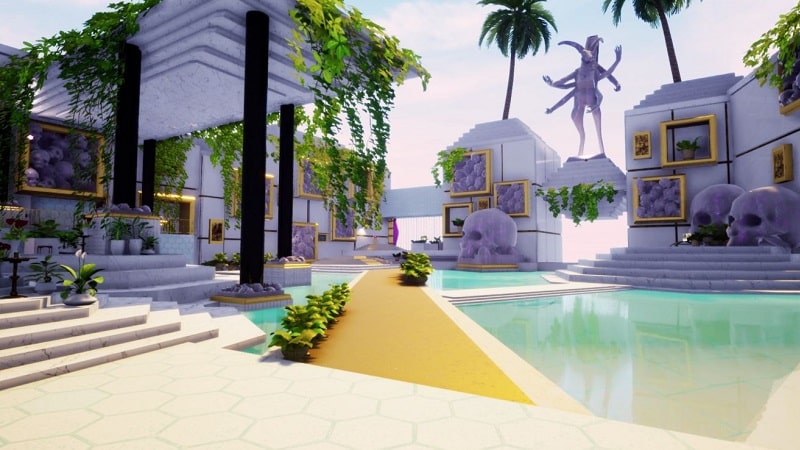 Talking to potential suspects for example, is rarely just a case of tackling a straightforward dialogue tree. As you collect more and more physical evidence, additional avenues of investigation open up with each suspect, while simply just getting to know them and shooting the s**t, so to speak, improves your friendship metric with them which also reveals yet further opportunities to dig into their backgrounds and establish their alibis.

Pointedly, it’s the alibi mechanic that ostensibly sits at the heart of Paradise Killer’s conversation and interrogation system. Essentially, you make breakthroughs in Paradise Killer by first obtaining alibis from each character and then setting about collecting evidence and testimony from other characters to ‘break’ that alibi. Quite simply, it’s super satisfying stuff not least because the procedural hoops that you find yourself jumping through are somewhat approximate to what detective work (at its bedrock) would likely fundamentally require in real-life.

Simply just piecing together evidence, sorting clues and identifying contradictions in testimonies and alibis makes you feel powerful – not least because Paradise Killer actually does very little in terms of hand-holding, instead shifting the onus on the player to develop the sort of forensic intelligence that has long been a cornerstone of the genre in games, books and film. From the tip of your toes to the top of your skull Paradise Killer makes you feel like a detective and that’s something that it should absolutely be commended for. 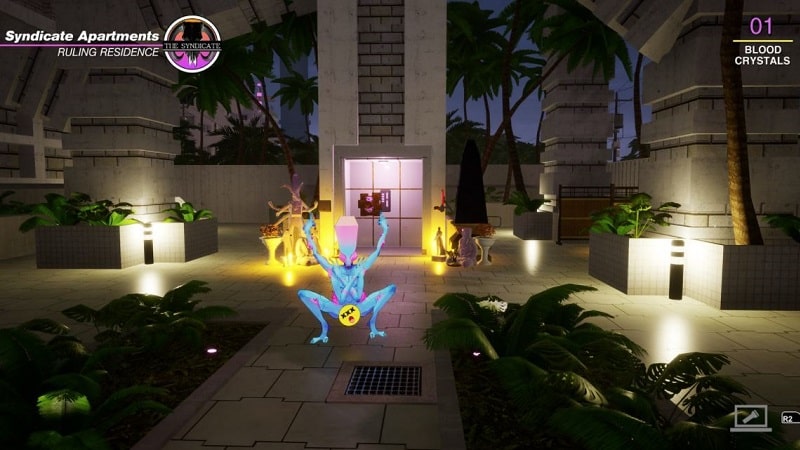 Buoyed by the freedom afforded by the physical real estate of its open world, Paradise Killer has players doing, somewhat unexpectedly, a whole heap of platforming too. Rather than having all of your clues and evidence existing at ground level, Paradise Killer scatters such key items across the width, breadth and verticality of its open world, forcing you to clamber over all manner obstacles to get to where you need to be.

What makes Paradise Killer feel like a platformer at its heart oddly, is that there are a whole heap of collectibles in the from of Blood Crystals spread around the place which act as the sole form of currency on Paradise Island. Used for everything from bribing suspects to paying for clues from a local information broker and updating your trusty Starlight computer to hack terminals to gain access to forbidden areas, there’s actually a decent incentive to go hunting around the island for these crystals – though I can certainly understand if certain folks find that whole pursuit of collectibles feel frustratingly extracurricular.

Luckily, you are immune to falling damage which thankfully expands your freedom to take literal leaps of faith you wouldn’t normally be inclined to take and while Paradise Killer’s platform beats are hardly going to trouble the likes of Ratchet And Clank, it functions well enough all the same within the boundaries of its intended purpose. 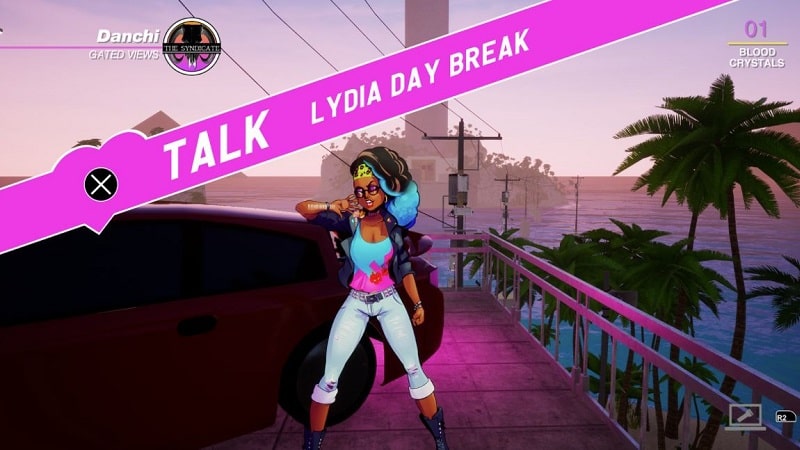 Beyond all that detective work and platforming, there’s a touch of the Metroidvania in Paradise Killer’s design DNA too, as some areas cannot be accessed until you have upgraded Lady’s Starlight computer with the appropriate protocols to reach previously inaccessible areas. Again much like the platforming it feels like a largely whimsical addition to the overall superstructure that sits atop Paradise Killer’s detective bedrock, but in reality it just provides additional esoteric layers to a detective adventure that steadfastly does not play by the rules of the genre status quo.

The drawback to Paradise Killer’s seeming embrace of open world exploration and platforming is that fast travel isn’t free, but instead must be paid with Blood Crystals to be activated at one of the manual save points (there is no auto save in Paradise Killer – so also bear that in mind). This seems like an entirely unnecessary mechanic to have in the game quite honestly – fast travel should be free at each of these terminals and so as a design decision, it baffles me somewhat in this regard.

Elsewhere, another way that Paradise Killer seeks to meaningfully separate itself from other detective games is in how it doesn’t explicitly tell you when the case is ‘complete’, but instead leaves it to the player to decide when they think enough evidence, testimony and discoveries have been made to make a prosecution viable – y’know, like a real detective. 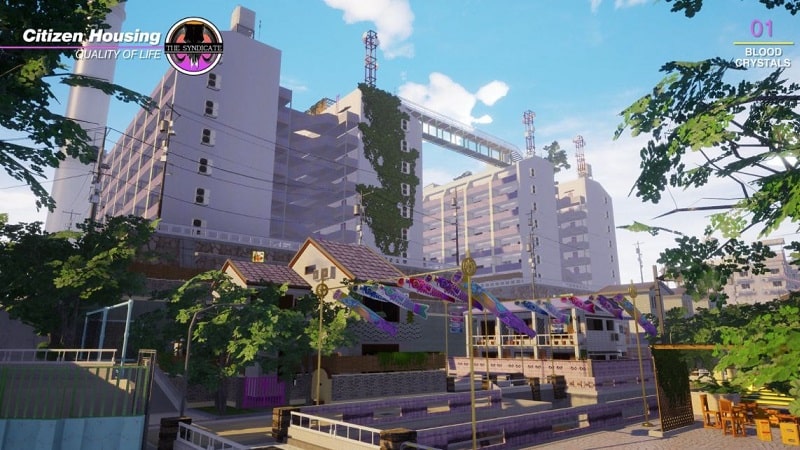 And again, Paradise Killer reveals yet further depth by how the prosecutions and more importantly your path to making them, are framed. As much as you might like to think you’re a crusading instrument of justice, the various degrees of politicking and skulduggery on Paradise Island are such that every action, every conversation and every clue which has led to the conviction of a character has been orchestrated by other individuals who have interests that are a far cry from anything resembling justice or morality. Again, it’s all wonderfully deep stuff that begs further investigation in a way that you just don’t see from other detective games, while also providing a whole heap of replayability thanks to the multiple endings that Paradise Killer provides.

But now we come to the elephant in the room. Perhaps the single biggest flaw that stands betwixt Paradise Killer and something resembling perfection is its lore. A dense and multi-layered conceptual kaleidoscope filled with esoteric characters, bizarre notions and places that all seem to be twisted versions of what we would know in our reality, it can be difficult to immerse yourself in Paradise Killer’s complex approach to worldbuilding in the early going as you’re bombarded with all manner of terminology and odd characters that at once should seem familiar but can appear frustratingly idiosyncratic.

Rather than just existing in the background and allowing the player to carry about their business and largely ignore it, Paradise Killer’s lore is instead threaded through every conversation, situation and inch of the environment that you’ll encounter. From the characters that look like they’ve all exited stage right from a Suda51 game, such as cuss-spewing demon that always has two birds flipped at the player or a panicked red boned skeleton, the characters in Paradise Killer are something of an eccentric bunch to say the least. 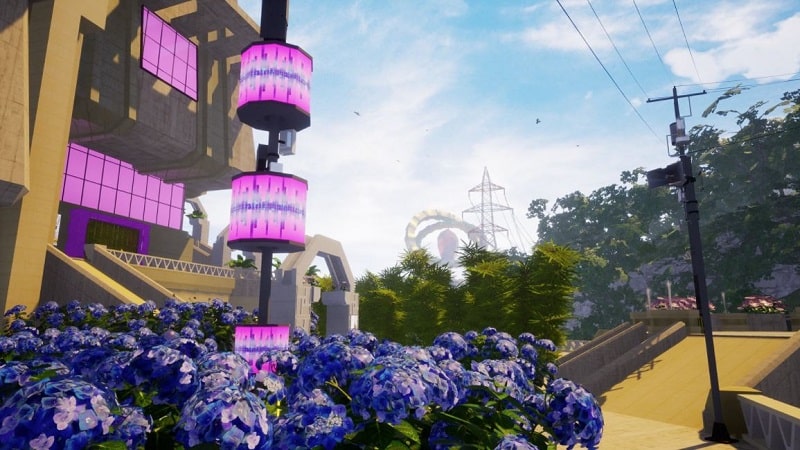 That’s not to say that once you learn about the plight of Paradise Killer’s cast of syndicate detectives, insane medics and idols that have an actual goat head where their, well, human head would normally be, that you won’t be engaged – because you will. Paradise Killer’s deeply woven tapestry of malevolent gods, cyclical apocalypses and the pursuit of forbidden paradise is nonetheless a roundly compelling yarn by all measures, it just requires a lot of patience and perseverance in the early going to process all of that lore which at times can feel a little too off-kelter and dense for its own good.

Visually, Paradise Killer is one striking offering. A sun bleached, vapourwave noir detective extravaganza, Paradise Killer trades the usual dank alleys, dark skies and depressed palettes of other detective games for a roundly idyllic paradise of explosive colours and vibrant design that helps to define the game uniquely and thus provide yet one more instance for how it stands apart from its genre counterparts.

If that wasn’t enough, Paradise Killer on PS5 also boasts ray-traced reflections that are amply employed on the many shiny surfaces that can be found throughout the game world – adding a coat of sheen that helps the environments of Paradise Island to really come alive. Oh, and the fact that Paradise Killer just skates along at a buttery smooth 60 frames per second doesn’t hurt either and is, in fact, rather nice – not least because it makes all of the exploration and platforming that you’ll be doing feel that much more responsive and satisfying. 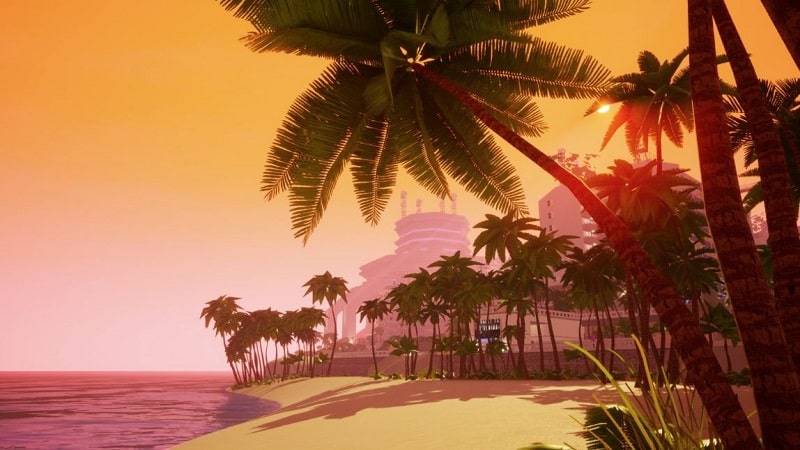 Then there’s the music. Oh my days, the music. A foot-tapping, head-bopping and full-throated, ear-tickling embrace of endlessly chill 1990s style, blue sky SEGA anthems, the soundtrack of Paradise Killer is so good that you can actually collect additional tracks dotted around the island, and really, this is how you make collectibles interesting – you make people actually want to seek them out in the first place.

A beautiful abomination that almost breaks under the weight of its thick but ultimately compelling worldbuilding, Paradise Killer is a stupendous detective yarn that reimagines the genre in bright sun-kissed colours with a cast of truly bizarre characters all living in a world that feels like a microcosm of sci-fi storytelling for the last thirty years. Exceptionally constructed, boundlessly enjoyable and fiendishly stylish, Paradise Killer is your new favourite detective game.

Paradise Killer is out now on PS4 and PS5.

A beautiful abomination that almost breaks under the weight of its thick but ultimately compelling worldbuilding, Paradise Killer is a stupendous detective yarn that reimagines the genre in bright sun-kissed colours with a cast of truly bizarre characters all living in a world that feels like a microcosm of sci-fi storytelling for the last thirty years. Exceptionally constructed, boundlessly enjoyable and fiendishly stylish, Paradise Killer is your new favourite detective game.