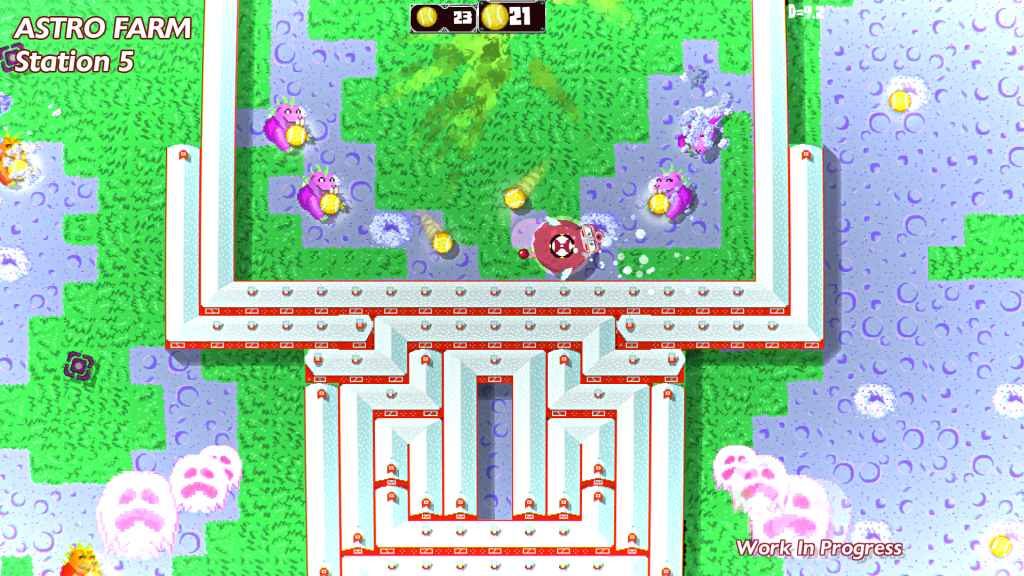 Pig Eat Ball is a mind-blowing game. Here is a game wherein the primary mechanic involves a pig eating tennis balls, vomiting them back up, and then eating them again. If the pig eats too many vomit-covered balls at once, she vomits again – uncontrollably – spewing the balls all over the screen in a splash of green.

Now, I’m going to surprise you by telling you that Pig Eat Ball isn’t really that gross. In fact, Pig Eat Ball is endearing, even charming. Somehow, through some sort of mind-bending voodoo, developer Mommy’s Best Games has managed to take an utterly disgusting premise and turn it into an engaging arcade mechanic. And from this mechanic, Pig Eat Ball delivers hours and hours of fascinating, brain-bending puzzle/arcade fun.

Pig Eat Ball is in a class of weirdness all by itself, but it isn’t nearly as disgusting as it sounds. The gross premise is just the hook to pull unsuspecting players in. The underlying dope is the insanely clever action/puzzle gameplay, and that’s what will reel you in and keep you coming back for more. Really, you’ve got to play this thing to believe it.

Princess Bow is a pig. Her father, King Cake, is a piece of cake. Right out of the gate, you have to just throw up your hands and go with it. To say that Pig Eat Ball has a Katamari-like sense of humor is a bit of an understatement. Pig Eat Ball is bonkers.

One day, King Cake informs Princess Bow that it is time that she gets married. He is going to hold “the games”, and whomever wins the victor is will win Princess Bow’s hand in matrimony. Princess Bow has other ideas, and enters the contest for herself, determined to win and claim her own freedom.

What are “the games”, you ask? Well, they seem to involve finding out who can eat the most tennis balls within specified timeframes. Winning a collection of levels wins Princess Bow a pearl. Get enough pearls, and you can open up more levels. Pig Eat Ball is divided into literally hundreds of these short levels, most of which can be completed in under a minute, so there is a ton of content to be explored here.

The game gives you a command like “Eat 6 Yummies (balls) in less than 30 seconds” and then pops you into a level you haven’t seen before. It is your job to navigate the unique environment, figure out the puzzle dynamics to access the tennis balls, and avoid enemies long enough to make that happen. Every single one of these levels is uniquely designed, and each has a “solution” that can be discovered. The ingenuity on display is stunning.

Simply completing a level is enough to move on, but figuring out how to complete a level quickly and efficiently is part of the fun. A simple bronze, silver and gold medal reward system is in place for folks that want to push their ball-eating skills to the maximum.

Eating is accomplished via Princess Bow’s amazing ability to vacuum tennis balls into her mouth as she moves about the space station she lives on. In fact, Princess Bow’s suction is always in the “on” position, and you actually have to press a button to make her stop inhaling. She also has a boost move that helps her avoid enemies and get to targets faster, and a button that allows her to cough tennis balls back out once she has eaten them.

As Princess Bow eats tennis balls, her body swells bigger, making it difficult for her to maneuver the doors and corridors of the levels she inhabits. The only solution is for her to spew balls back out strategically, in order to squeeze through the door and gobble them back up again.

This leads to all sorts of cool puzzle mechanics, as Pig Eat Ball places tennis balls behind trapdoors, number puzzles, contextual barricades, and enemy-specific obstacles. These are scattered about Pig Eat Balls levels, ensuring that the player is never able to simply coast by on arcade skills alone. You have to think to succeed at Pig Eat Ball.

All of this combines into something supremely unique in modern videogames – a classic feeling effort hat contains a completely new and unique mechanic. And like arcade games of the 1980s, Pig Eat Ball will feel immediately familiar and playable to anyone that picks it up.

As I played through Pig Eat Ball, I was astounded by the creativity on display in the level design, and the pure ingenuity behind the puzzles. All of the puzzles are environmental in nature, meaning that simply messing around with them a bit will teach you how they work. Solving them quickly, on the other hand, is a different matter entirely.

Pig Eat Ball has a quick restart mechanic in place, allowing for players to instantly pick back up at the beginning of the level if they screw up. This comes in amazingly handy. Often, I would enter a level to scope it out, and if I couldn’t beat it quickly I would wander a bit to get the lay of the land before starting over for my “real” run.

Throughout the game, tributes and references to videogame history come fast and furious, some more subtle then others. The early level that resembles Pac-Man’s maze is pretty obvious. But a little futher in the game I was bouncing around a pyramid structure, avoiding a snake-like enemy, when I realized “Oh my God, this is Q-Bert!”.

While earlier games are referenced in Pig Eat Ball, the mechanic of Princess Bow vacuuming up tennis balls remains the main draw throughout the entire game. It is the way that this mechanic interacts with the unique and varied level design that creates the fun.

Colorful And Bright, Pig Eat Ball Is A Burst Of Fun

Everything about Pig Eat Ball clicks, and playing the game, you can feel the hard work and meticulous attention to detail that went into the game’s construction. The space station hub areas are full of their own puzzles and secrets to find and delight over. Characters spout awful tennis-ball puns with deadpan regularity, indicating care taken in writing a game that really didn’t even need dialogue. Music and sound effects are bouncy and engaging.

The graphics in Pig Eat Ball are smooth and colorful pixel-art, with Princess Bow’s blocky body navigating the corridors and tunnels of her space station and chatting up her fellow weirdo inhabitants in an endless flow of retro-glorious animation.

You can feel the hand-crafted workmanship in each level of Pig Eat Ball, which makes it all the more special in that the game is so damn weird. The idea that someone had an idea as bizarre as this one, and the spent literally years crafting and honing it with single-minded determination is…well…inspiring. And if you can take inspiration from a game about a pig princess vomiting tennis balls all over the place, then you know that game must be doing something right.

Pig Eat Ball is a unique proposition in modern gaming – a classic-feeling arcade game with a completely original mechanic at its core. The puzzles, characters and world built around this mechanic are delightful, despite giving a first impression of being a little gross. Arcade and puzzle fans will find a lot to love here. Pig Eat Ball is utterly unique.