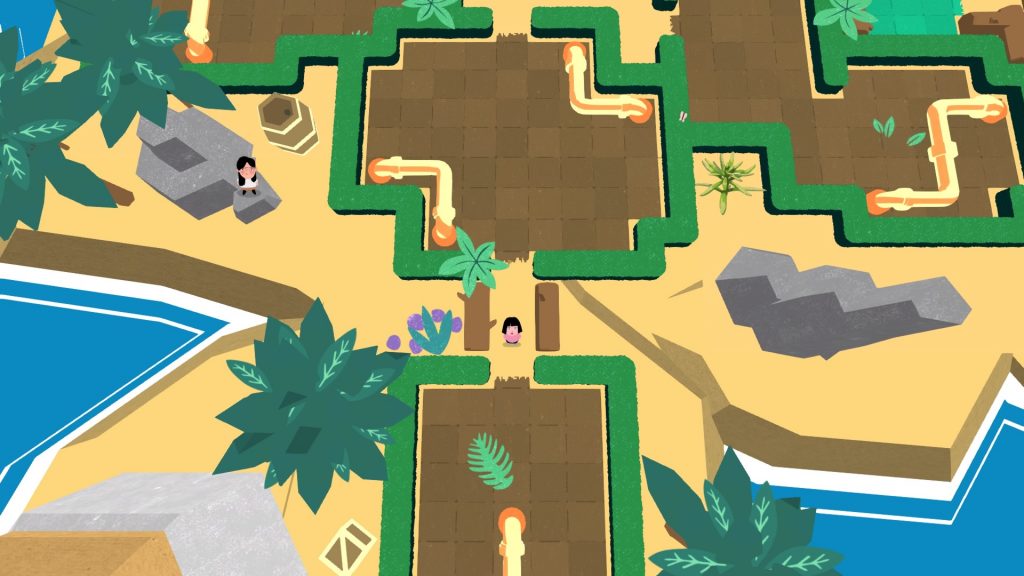 Ever since Super Pipeline wowed gamers on the Commodore 64 towards the end of the last century, plumbing games have struggled to reach the dizzy heights of that veritable gaming cornerstone. Despite the clamour from the great unwashed for more plumbing in their video games, large franchises such as Zelda, Assassins Creed, Call of Duty and FIFA have all failed to incorporate waste pipes, stopcocks or mono tap backnut boxes into their oeuvre.

A RULE OF PLUMB

Actually the minutiae of plumbing are once again cruelly overlooked in favour of logistical puzzles that happen to feature flowing water. Disappointed plumbing enthusiasts could just as well be joining together sections of tunnel filled with European immigrants eager to flood into Teresa May’s garden and wreak havoc with her gnome. Fortunately, Plumbing Simulator 19 is due out later this year.

Pastels and jazz greet you on booting up, and personally this suits me just fine. If only my alarm could go off each morning allowing me to awake to a pastel-hued bedroom while being serenaded out of my slumber by some nylon-strung Spanish jazz guitar. It soon becomes apparent that these are false friends: while one is lulled into a relaxing fettle by the pretty Scandinavian art-style and cute character graphics, lurking around the corner are some truly fiendish brain-sapping tests disguised as a few sections of innocent piping.

Your character begins at a harbour on a picturesque island near her house with her sleeping uncle inside. A short walk around the corner brings you to puzzle number one which is a nice easy introduction – insert pipe A into the gap between faucet 1 and drain pipe 2. The only controls at your disposal are movement, with which the shoving of pipe sections can be facilitated. A press of the O button rewinds one move at a time after a mistake, and a press of X moves forward one move at a time if you decide that rewinding was a silly idea. Triangle (or leaving and re-entering the puzzle area) resets the pipes so you can start again.

After an easy intro, the next two puzzles are slightly more difficult and introduce different sections of pipework. By puzzle number five (out of forty seven) the difficulty level ramps up considerably, so much so, that I started to severely doubt my puzzle solving abilities which admittedly aren’t up to much.

The problems posed during each level arise from the extremely limited space in order to move the pipes around as well as your character’s inability to pull pipes which have become stuck against a wall or other pipe. It’s not called Pipe Pull Paradise after all, and if it was, Sony would be down on Corey Martin like a ton of bricks.

The logistics of shuffling pieces around in a small space and rolling pipe sections onto their sides soon becomes your main focus. Repeated playthroughs of the tricky levels slowly reveal the solution like a 5 litre bottle of Uric Extreme doggedly clearing a clagged up urinal. The elation one feels when completing the more involved conundrums is hugely satisfying and spurs you on to the next. The head scratching and thought needed to move on means that this is a game best enjoyed in small doses. It’s a shame that a Vita version hasn’t been mooted as it would have been perfect for the sadly condemned handheld.

The island of pipe puzzles is made up of different sections separated by gates which can be opened up when you solve the first of the new ‘set’. Each set has a USP, be it magnetic pipes, holes in the ground to negotiate, or turntables to rotate and potentially stack the pipes vertically. The difficulty level subsides slightly on each new set of puzzles to ease you in, but you soon have to put your thinking cap on again to get further into the game as the complexities of the puzzles quickly increase once more.

ONE MAN’S PLUNGER IS ANOTHER MAN’S DRAIN ROD

The meticulously crafted and admirably perverse design of each puzzle by developer Corey Martin means there is a whole lot here to pleasantly vex fans of the genre. The brain-teasers further on will take a good while to solve and there’s a pleasant/nasty surprise after the final mammoth task for those patient enough to complete all the levels. For mere mortals, the uncompromising difficulty of the hard and expert levels may soon alienate and frustrate, particularly when the learning curve is so steep.

A deceptively difficult puzzle game hiding behind a chilled aesthetic which will be appreciated by those who are up for the challenge.