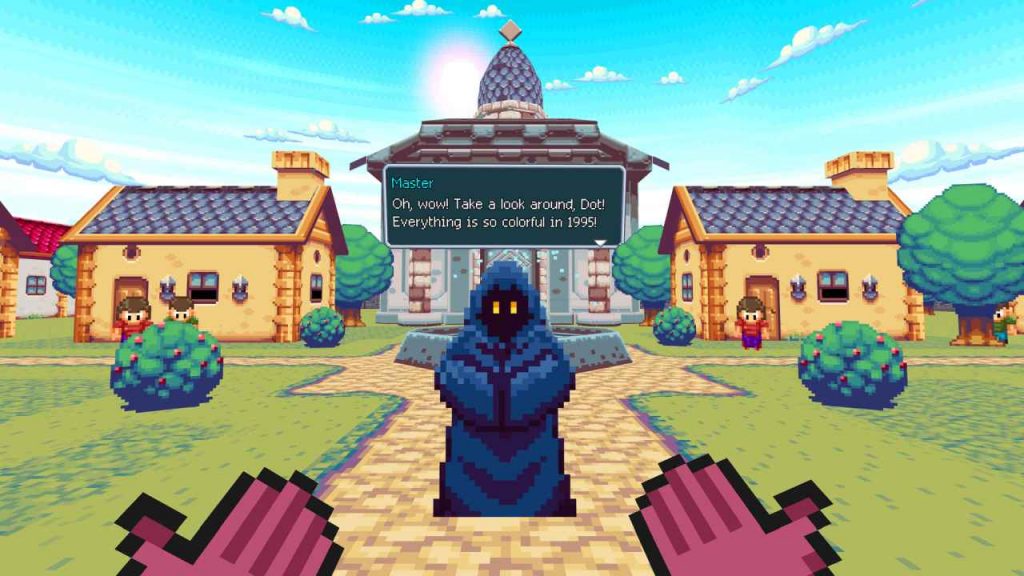 Pixel Ripped 1995 is a love song to 90’s era gaming. It is also a very meta examination of VR gaming, and how gaming mechanics and standards continue to resonate, regardless of the medium. Pixel Ripped 1995 is making all sorts of statements in its four or so hours of gameplay, and not all of them involve how cool video games were back in the days of SNES.

The simulated old-school games in Pixel Ripped 1995 are awesome (and awesomely varied – is that Nightmare Creatures I’m seeing in there, or am I just crazy?). But the real joy of Pixel Ripped 1995 is the way that it pushes players beyond any reasonable boundaries, forcing their minds to expand and think about actions on various planes of existence.

A Game Within A Game, Layered Inside A Game

Players in Pixel Ripped 1995 take on the role of Dot – an old school video game heroine much in the vein of Samus Aran from the Metroid series. Dot, in turn, spends the majority of the game possessing (Bonding with? Co-opting?) Daniel, a pre-teen video game wiz. Dot lives in the video game world, and via an AOL-style interface, she is able to psychically connect to Daniel, seeking his help and expertise to overcome a number of challenges, defeat the evil Cyblin Master, and recover the Pixel Stone.

Pixel Ripped 1995 rightly doesn’t spend a ton of time worrying about the mechanics of this convoluted story. Via this virtual reality game of character-viewpoint telephone, the player spends a lot of time seeing the world through David’s eyes, getting to know his over-protective real estate agent mom, his goofball (but loving) dad, and his jerky braggadocios neighbor, who never misses a chance to put down David and mock his video game skills.

All of these characters swirl around David while he remains intently locked onto whatever screen he is in front of. David only acknowledges his parents and friends when one of them threatens to interrupt his gaming, pausing briefly to fire his Nerf gun off into the room to distract them. Pixel Ripped 1995 succeeds amazingly at replicating the intent focus that gamers can summon, asking the player to continue whatever activity is taking place on the TV while the outside world does its best to divert them.

The Games You Play Are Only Half The Game

While Dot is linked with David, the two conspire to play through a level or two of various 16- and 32-bit games. These games, while not real ports or adaptations, are still close enough to actual real-world titles to be instantly recognizable by fans. Actions taken in these games have impact on the videogame world that Dot inhabits, as all video games seem to be operating in the same shared Pixel Ripped Universe, regardless of the difference in visuals or mechanics.

For example, in one instance, David is standing between SNES and Genesis (or their Pixel Ripped dopplegangers) displays in a video rental store. On one television is a Sonic-type platformer. On the other is an Aliens-like action game.

All while being distracted by his nemesis and his chattering dad, David must play both games, bouncing between the two. In an amazingly clever twist, David/Dot can grab items from one game, and pull them into the other. Need to knock down those Sonic ramps? Grab an explosive from the Nostromo. Need to get past a tall wall on the Alien space station? Grab a bouncy bubble from Sonic.

Managing all of this is amazingly intuitive, and the controls in this scenario work like a charm. There are a number of set-piece moments in Pixel Ripped 1995 that rocked me back on my heels. At times (perhaps due to David/Dot’s connection), games begin bleeding out of the television and into David’s “real” world.

These are some of Pixel Ripped’s best moments. For example, players must navigate a Starfox-style level, where you are actually holding Fox’s ship in your hands. Or a Road Rash clone, with David sitting in the back of his dad’s station wagon, controlling the action on the roads behind them. Or one stunning segment where the roles are reversed, and Dot finds herself controlling David, while doing battle herself. In this instance, the player must warp their mind to control both characters at the same time with one controller. The effect is simply breathtaking.

Pixel Ripped 1995 Is Commentary On Why We Love Games

Playing Pixel Ripped 1995 is like taking a tour through a middle-aged gamer’s beloved memories. It is absolutely stunning that developer ARVORE created a VR game (or rather, two VR games – this is the second in a series) about staring at a television, and it totally works. Using the amazing technological breakthrough of VR to play game styles that were outdated twenty years ago? Absolute magic.

And don’t think for a moment that because Pixel Ripped 1995 is a Disney-like love letter, that you will have an easy time of things. Part of what pulled gamers obsessively into games of the 16-bit era was their blistering difficulty. Pixel Ripped never presents the player with anything that is so difficult that it can’t be overcome with some practice. But make no mistake – you will die. A lot.

I found myself swearing to my empty living room as I re-upped for “just one more try” over and over again, and one level actually had me taking off my headset and walking away for a few minutes before I started throwing stuff. But I always came back after cooling off, and that is the secret to the charm of Pixel Ripped 1995. It knows that gamers hate walking away from a challenge, so it creates checkpoints that are generous enough to make rage quitting (and returning) a viable option.

Pixel Ripped 1995 Is A Stellar Ode To Gaming And Gamers

Pixel Ripped 1995 isn’t perfect. The UI gets a little wonky at times, and sometimes goals for progression become a little unclear (Pro tip: if things aren’t working the way you expect, take a gander at David’s hands. If they aren’t both on the controller, there’s your answer).

But Pixel Ripped 1995 is a game about old games, and these artifacts from an earlier age were much, much jankier than anything that is experienced here. A bit of frustration is part of the deal, and playing Pixel Ripped 1995 reminded me that when I want to say “It’s broken!”, it is usually because of something that I’m doing wrong. It’s all too easy to blame the game when you are sucking.

Pixel Ripped 1995 is a blast of fresh air in the sometimes stale VR gaming space, a burst of retro fun with snippets of the past that never outstay their welcome. Like older generations watched films like American Graffiti or Grease and felt pains of nostalgia for their lost, wild youth, there is a generation of people that will play Pixel Ripped 1995 and feel those same pains for weekends spent in dusty basements and living rooms, glued to a television with a controller tightly gripped in their hands.

Pixel Ripped 1995 allows gamers to reclaim a bit of that lost youth. There is no such thing as a time machine, but Pixel Ripped offers the next best thing. And aren’t experiences like this what this magical technology we call VR is for?

Pixel Ripped 1995 is now available in the PlayStation Store.

Pixel Ripped 1995 pulls off a remarkable magic trick, slamming players back in time to the gaming days of the mid-90s. With brain-twisting challenges and a solid dose of nostalgic delight, Pixel Ripped 1995 is an amazing romp through the games of yesteryear, combined with amazing modern mechanics. Highly recommended.