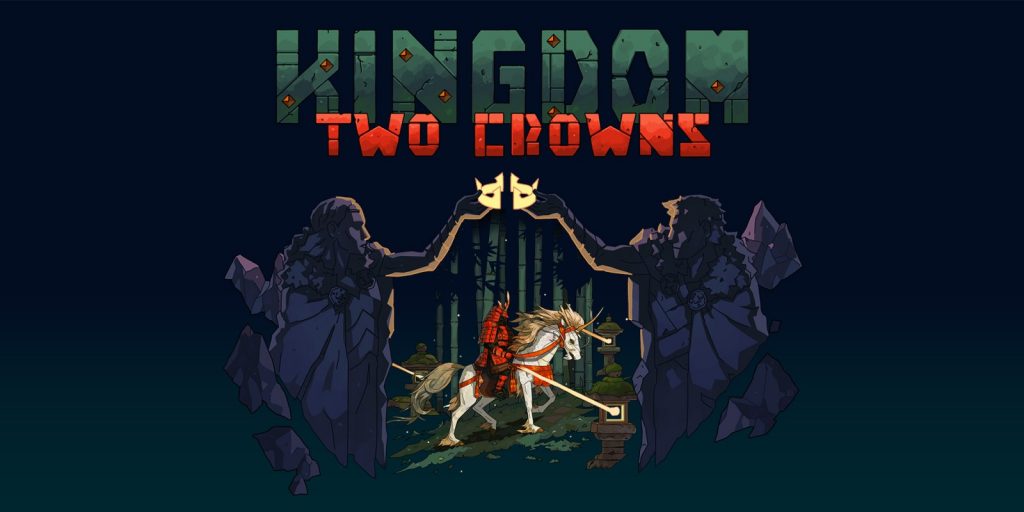 Described as a ‘micro strategy’ experience, Kingdom Two Crowns is a world away from the overbearing raft of systems and considerations that often make strategy games so typically intimidating to outsiders. As a ruling monarch locked onto a two-dimensional plane of existence, you must build, defend and expand your kingdom in both directions all the while seeing off the attacks of the Greed – a nocturnal race of monsters who show up to wreck your kingdom and steal your crown.

Where Kingdom Two Crowns offers its biggest boon though, is in how it fashions a distinctly streamlined and slow burning affair that emphatically makes it highly suitable for newcomers to the strategy genre.

Pretty much everything is simple to understand in Kingdom Two Crowns and it’ll seem like paying for things is pretty much all you’ll do within the game in the early stages. Whether you’re building fortification towers for your kingdom, convincing hermits to join your kingdom at a coin a piece, or, fashioning tools such as bows, hammers and scythes for your subjects to use, everything comes with an obvious currency cost associated with it.

The upshot of this is that a veritable smorgasbord of tactical opportunities present themselves – do you drop some coins onto a river crossing to build a bulwark against the encroaching Greed, or, do you use that same money to cut down trees and hire more builder folk? Whatever you choose to do with your hard-won monies has wide ranging tactical ramifications, even if it seems like your options are limited in the early going.

As to how you accrue the necessary coinage to do all these wonderful things, there is no shortage of ways to achieve this. You can nab coins from chests found laying around the land, milk it from the subjects of your kingdom who you provide you with cash for tasks they have completed, and also money can be conjured into existence by murdering the various creatures of the world.

Then there are the different tiers of money to think about. From common coins to opulent gems, each currency can be used to buy different resources and even activate certain special shrines, altars and temples throughout the world of Kingdom Two Crowns. You do though need to be extremely careful about how you spend your money, and also how much of it you have on your person at any one time. The reason? The Greed.

At nighttime evil Greedlings appear and sprint towards your kingdom with their ultimate goal being to take the crown from your noggin and thus causing you to effectively ‘lose’ the game. However, if you have coins on your person, or if the Greedlings encounter your subjects, they will take your money first, assault your subjects and steal your equipment long before they lay a grubby hand on your shiny metal halo – adding on a nice little layer of strategy in the process.

The thing is, none of this is explained. From taming a dragon, to building a lighthouse to leading your forces through a portal to fight the Greed boss monster, so much of Kingdom Two Crowns remains shrouded in mystery and left for the player to discover. To a great extent, this sense of discovery works inexorably in Kingdom Two Crowns favor, as quick sessions often stretch into hours on the promise of finding some new ruin, treasure or denizen of the world to interact with.

The drawback of this freewheeling approach to orienting players with Kingdom Two Crowns more nuanced aspects however, is that it can sometimes prove frustrating to decipher the upgrade path for certain structures and unit types when you aren’t sure how to get there in the first place.

Take the fortifications of your kingdom early on in the game for example. You can have all the money you like (well, as much as the jar at the top right hand corner of the screen can carry anyway), but you’ll reach a point with your infrastructure where you’ve used as much wood and money as you can, but stone is required in order to proceed to the next stage of structure types.

The problem is, because the game doesn’t make an effort to tell you how to obtain stone (it’s not obvious, trust me), Kingdom Two Crown’s uninhibited lust for discovery can make such game elements feel more frustrating and daunting than they otherwise should be.

A highly entertaining addition to the game, tackling Kingdom Two Crowns with a friend proves to be a resolutely enjoyable affair as you both pair up your wits and your resources to overcome the Greed threat – it’s top stuff certainly, and stands as one of the more interesting co-op experiences you can have on PS4.

If it wasn’t obvious already, it’s clear that Kingdom Two Crowns is an exercise in minimalism. From the reductive UI to the almost non-existing hand-holding and a real emphasis on player-driven discovery, Kingdom Two Crowns makes a solid case for itself as one of the most streamlined strategy games available.

Mirroring Kingdom Two Crowns succinct structure is its presentation, as charm-stuffed sprites give way to majestic pixel art lakes, mountains, hills and forests in one of the most unusually attractive titles to grace the PS4 in quite some time. If you’ve typically shied away from strategy games, then Kingdom Two Crowns, with its beguiling visual veneer and streamlined discovery focused gameplay is pretty much just what the doctor ordered.

Kingdom Two Crowns is out now on PS4, PC, Xbox One and Nintendo Switch.

Kingdom Two Crowns is an immersive and frequently surprising strategy game that is quite unlike any other. Fans of slow-burning, atmospheric strategy efforts with emergent discovery will find much to enjoy here - as would newcomers to the genre at large.