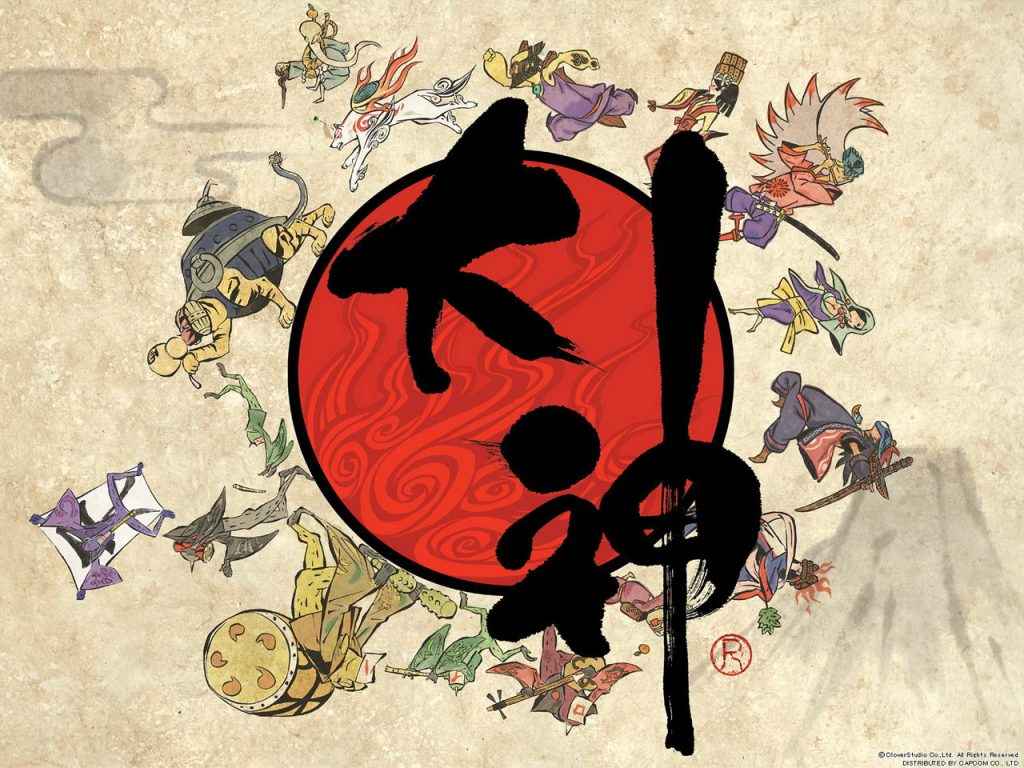 Capcom's strategy of revisiting of old franchises via the magic of porting could be viewed as one lacking invention or originality. Yet it has at least given some classic titles a new lease of life. Dead Rising finally available for PlayStation. Mega Man's collected works given a fresh audience. Street Fighter IV out again because…I dunno? Probably is a reason somewhere.

Now it's the turn of Okami. The artful tale of a God in the vessel of a heroic white wolf. A wolf who has a magical paintbrush to ‘fix' reality in the wake of evil forces draining the world of color and life.. It arrives on a PlayStation console for the third time, still seeking that larger acceptance that eludes it. You see, Okami is a heartwarming classic. A classic that came along as the PlayStation 2 was about to be superseded by the PS3. Despite overwhelming critical acclaim, it died on its arse commercially. Then it gained a second shot with a HD version on PS3. It again grabbed critical acclaim. Again it failed to spark much interest.

Third time's the charm? Probably not, but there's at least a slightly better chance for it on a more popular Sony console than last time. It's even out during a fairly quiet end of year period. Plus, it's still a really bloody good game. Much of Okami is in the mould of an action adventure akin to that Nintendo juggernaut The Legend of Zelda. A simple, beautiful idea on the surface, but imbued with something of its own to make it stand out as a special example of the genre. One for Okami is its hand drawn look, inspired by historic Japanese art. Okami's trump card though, is the Celestial Brush. The brush is a time-stopping tool that lets the white wolf/God protagonist Amaterasu (or Ammy, as the sprite companion would have it) fill in gaps in the land of Nippon.

It's a joyously simple trick that feels perfectly in line with the gorgeous hand-painted art style. You hold R1 and apply the brush with square to create simple shapes. These shapes can form trees, bombs, bridges, even attacking slashes. It also controls the sun in the sky, and the path of the wind, all with a brush stroke or two. This is far more than a gimmicky throwaway to sell the game, it's a completely integral part of how Okami looks and plays.

All of Okami is a canvas, and the player/Ammy, is the brush. One that creates beauty from the grey bleakness left behind by the corruption created by the aforementioned ancient evil. It's a delight every time you see a part of the world bloom into vibrant life after clearing the blight upon it. There's renewed majesty on display with this PS4 version, as the already sumptuous, timeless visual splendor pops just that bit more this time around. Eleven years on and Okami is as heart-wrenchingly beautiful as it ever was. In a manner rather reminiscent of The Legend of Zelda, the brush's techniques are mostly introduced as you enter a new dungeon or key story point. New brush powers are usually deployed then, at exactly the moment they are to be essential. When a certain dungeon has need of said power, and/or the boss held within it. It's a steady-handed system, and its straightforward purity is something of a rarity on a PlayStation console in the modern era.

The powers also have uses when it comes to combat. Amaterasu may have a fair few weapons at her disposal already. These include rifles, swords, and whips, but they can be used in conjunction with the brush powers to really mix up what at first appears to be rather basic combat. Ammy can create bombs, slash, and stun enemies with the brush's abilities. It's a surprisingly deep system, and one that remains as enjoyable as it is stylish throughout. Even if the lock-on is a touch haywire. Other brush techniques are essentially puzzle-solvers. For example, by blooming cherry blossom trees, you earn Praise (experience). Praise is necessary to make Amaterasu an even tougher God. This may be an RPG-lite adventure, but the battles found in Okami are in a vein much more familiar to Capcom. Combat ensues in walled-off arenas, a-la Devil May Cry. This extends to the results screen at the end of each bout. There, Ammy is graded on her performance based on time and style. There's also a monetary incentive to how you finish a fight, be it by speed or by grace. The money, also found in breakable pots, trees, and more, can be used to upgrade Ammy into a strong Wolf God.

As great as Okami HD is, there are still some minor issues with it. Ones mostly caused by Clover Studios' homaging of the green tunic-wearing Hyrulian. Ammy's constant companion is a sprite who is quite frankly, a bit of a strain on the ears (sound familiar). While his comedic schtick has its moments, you'll soon wish he got squished.

Elsewhere, the initial pace is slow, with far too much text reading and not enough doing. Thankfully once that's out of the way, the game goes at a fairly decent rate, only really knocked by the odd repeating boss fight that serves little to no purpose beyond stretching the game's playtime a few minutes here and there. It's not a necessary move, and it's a shame it hasn't been shaved off in the subsequent re-releases. Otherwise, this is Okami as it was on PS3, minus the Move implementation. It even shares a trophy list with that version, so long-term fans may be somewhat dissuaded by that. If you're new to this (and there's a good chance of that) then obviously that's not an issue, so I implore you to seek out one of the most beautiful action adventure titles ever made. Sure, it's not exactly flawless, but Okami HD’s flaws are miniscule in the face of such majesty.

This is another chance for one of the most underappreciated adventures to appear on a PlayStation console to gain a new, much deserved, audience. Time has been fairly kind to Okami despite minor gripes. If you've yet to experience the wonderful world of Okami, then this is as good a chance as any.