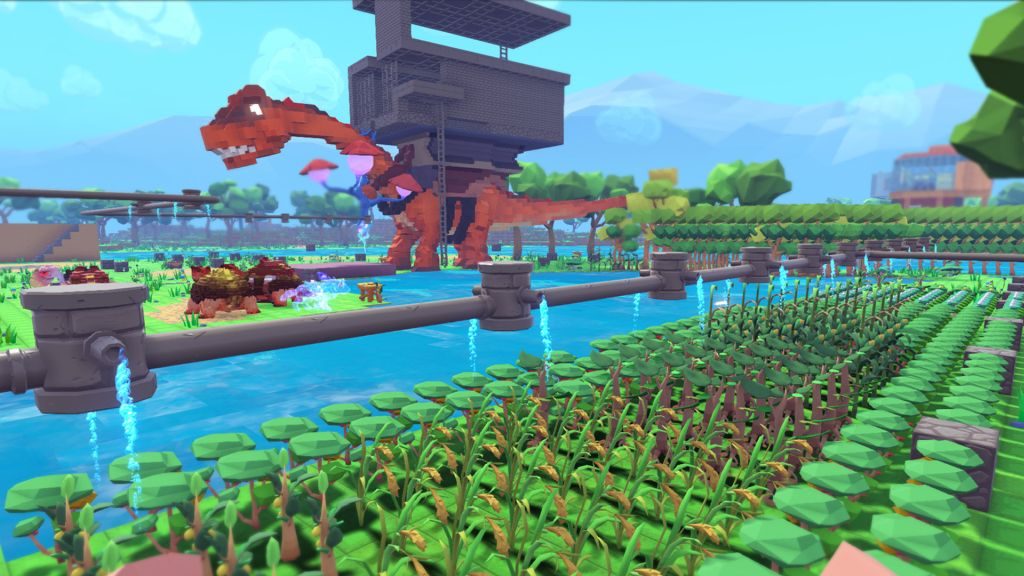 After around 20 hours of banging my head against the wall with PixARK, I set my controller down and backed away from my PlayStation 4. With little idea what I was doing, or what I was supposed to do, I had flailed around for far too long in PixARK’s open world. What on earth was this game all about? I had no idea. I don’t have a ton of experience with Minecraft-like games (beyond my beloved Dragon Quest Builders), and I have never played ARK: Survival Evolved. Since PixARK is purported to be a combination of the building and survival genres, I figured that I had better turn to an expert.

One of my sons is 16-years-old, and he was one of those kids that went nuts for Minecraft when it came out. An experienced gamer, he has dipped his toes into about every game genre out there. Being absolutely bewildered by PixARK, I figured I could abuse my dad powers to force my son to take a swipe at it, needing a fresh set of eyes to determine whether PixARK is really as bad as it seems to my old eyes.

Some PixARK Basics To Get Started

While giving my son his assignment (play PixARK all day while I was at work), I filled him in on some of the basics of the game.

PixARK allows players to customize a character, then drops them into a supposedly “safe” area of an open world filled with dinosaurs and hazards. With little explanation of what to do or where to head, the player must experiment with the environment (and the controls) in order to build shelter, find food, and survive.

With most games of this type, players can expect to gradually gain abilities, eventually crafting armor and weapons to survive and hunt, and building shelter against the elements. The game should feel as though the players is progressing in a natural manner, taming the land around them and slowly venturing further into the world. Not so in PixARK.

My response was, “Keep going. You are now committed. Make notes on WHY it sucks.”

He gamely agreed to continue.

At 10:20, the floodgates opened. The following is edited from the original novel-length text for punctuation:

“I also think the taming system is useless, since when I train an animal, it follows me around for a bit, then vanishes from existence. What’s the point of training? Trained animals never even help me fight off all the monsters that immediately kill me.

“There is also an exploit that needs to be fixed. When you mine a material like dirt or stone, you can place a block of it back down and re-mine it. Each time, you get a net gain of two of the block, completely ruining the scavenging aspect.” (Confirmed by dad).

“Finally, the sounds in the game sound compressed. The sounds are so low quality, it sounds like the noises from a crappy 50’s movie.”

I responded, “Perfect. Keep going, then show me all this stuff tonight.”

“I can’t keep going because I die whenever I try to explore,” he responded. Then, in all caps, “I HATE IT!!!! A COMPLETE FAILURE OF BLENDING MINECRAFT WITH A DINOSAUR SURVIVAL GAME.”

I Will Give You Ten Bucks To Keep Playing

At this point, I resorted to bribery, offering my son a ten-spot to continue playing. Reluctantly, he agreed.

“Update: This game moves so slow. I’ve played all morning, and I just got stone tools. Still can’t kill anything except basic creatures, and can only wander about three blocks outside the starting area without dying.

“I also discovered that the creatures’ levels don’t matter, since a level one turkey can kill you just as fast as a level 64 turkey (and they all intermingle).

“There is no real point to most of my character’s stats. Temperature or hunger/thirst are also pointless, since they drain so slowly that if I eat or go for a swim every 3-4 real-world hours I’ll be fine. Temperature gives me warning that I’m too hot or too cold that stay on the screen, but nothing bad ever happens as a result.”

At this point, I gave my son permission to stop playing, with the caveat that he had to give me a tour of his world when I got home from work. I could smell the relief coming through the phone.

It goes without saying that my son noticed the exact same issues with PixARK that I did. The controls and menu system are an incomprehensible mess, the level is jumbled and mostly irrelevant, the game feels random and unfair, and the goals of playing are obtuse at best. PixARK isn’t broken, per se, but it isn’t exactly playable either.

Yep, PixARK Is Just As Bad As I Thought

That night, we settled in for my son’s demo session.

I chuckled to watch him struggle with the UI after playing the game for five hours earlier in the day. Menus kept popping up to fill the screen and obscure the action. My son began issuing an endless series of dissatisfied grunts and gripped the controller far too tightly, wrestling to navigate menus that were clearly designed for PC and were never optimized for console.

I watched as he tamed around 30 small-ish creatures, then took a few steps too far and groaned when they were all slaughtered by a small spider, regardless of their species or level.

As we wrapped things up and I was wiping tears of laughter at his helpless frustration from my eyes, my son startled me by saying “I feel bad. The people that made this game are probably really nice.” This echoes the existential guilt that I often feel when issuing a bad review. As the adage says, “no one sets out to make a bad game”, and bashing the hard work of others is much less fun than some might suspect.

But as I responded to my son, “The people that pay for the game are probably nice too. Kids might save up for weeks to buy this game. How would you feel if you saved up and paid $40 for this game?”

“Angry. Betrayed. Ripped off,” was his response.

And that about says it all for PixARK. PixARK is a Mac & Me-style misfire, taking a brand that people love, and slapping it on a different property that people love. Sometimes beautiful people make ugly babies, and PixARK is one of the ugliest babies I’ve seen in a long time.

PixARK is now available on PS4. Review code kindly supplied by the publisher.

Whether you are a fan of Ark, voxel-based construction games, or survival games in general, you will find something to hate about PixARK. A wild mess of a game, PixARK is one of the most off-putting experiences on PlayStation 4. Avoiding PixARK is imperative.