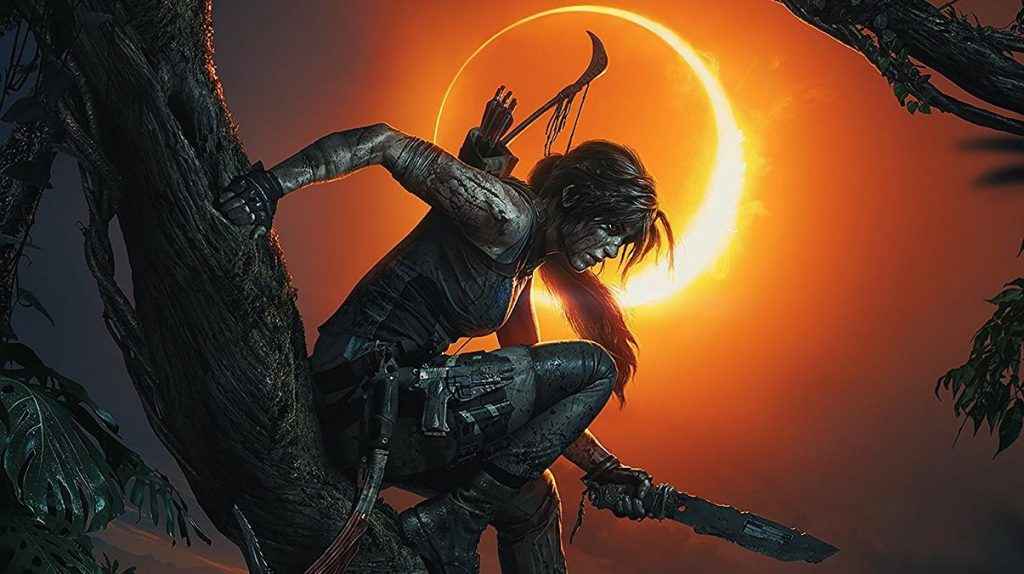 Though they say that familiarity can breed contempt (a maxim that was tested by the unnecessary rapid fire release of trailers prior to the game’s release), and while in the case of Shadow of the Tomb Raider Square-Enix have fashioned a seemingly workmanlike end to the trilogy, it is one that brings enough improvements that its place is secured as one of the best entries in the series all the same.

The continuation of Lara Croft’s ongoing battle against shadowy organisation Trinity, Shadow of the Tomb Raider sees its heroine locked in an impetuous state of mind. Driven to a position of distressed despair by her inability to definitively destroy Trinity and slake her thirst for vengeance, Shadow of the Tomb Raider continually ups both the stakes and the toll on Lara’s state of mind as the story presses on to its forebodingly grim conclusion. There are few laughs to be had here.

Though the first few minutes lack the immediate impressiveness of Rise of the Tomb Raider’s opening snowbound tundra, Shadow of the Tomb Raider nonetheless replaces such spectacle and sweep with its thematic anthesis – a claustrophobic, choking and tightly shot escape through a rocky crevice that sets the expectation for the incessant peril to come. Certainly, more than just a regular action adventure, Shadow of the Tomb Raider’s tone can often strike closer to that of a survival horror affair than the series typically less harsh narrative beats.

On the face of it, Shadow of the Tomb Raider would seem to have evolved little from the previous two games that lay in its wake. In this latest entry in the series, Lara shoots her bow, hunts animals, crafts new gear, fast travels from camps and generally does 95% of what she did in Tomb Raider and Rise of the Tomb Raider. Business as usual then, right?

Though such conservative design might put those off who are looking for more substantial strides away from the series established template, Shadow of the Tomb Raider makes a number of seemingly subtle, but ultimately considerable alterations that serve to freshen up this third game beyond what its arguably safe looking veneer might suggest.

Eidos Montreal Have Made Some Well Considered Changes To The Formula

The first and most noticeable of these tweaks is evidenced by how Shadow of the Tomb Raider fully re-embraces the underwater adventures that helped to define the earlier games in the franchise. Instead of the mostly shallow swims and excitable wading seen in Rise of the Tomb Raider, this game sees Lara properly diving into depths, scouring secret caves and uncovering treasure from forgotten fissures in the earth – it’s a great return to the cave-diving glories that we first saw in the PSOne Tomb Raider games.

Beyond fully enabling Lara’s underwater escapades, Shadow of the Tomb Raider also makes some nips and tucks to how its stealth gameplay handles too. Offering Ms. Croft more options to take out and sneak past hostiles, Lara can now hide herself in deep undergrowth and even shuffle along walls that have overgrown fauna – enabling her to both evade and kill with silence.

Where Shadow of the Tomb Raider really feels like it makes a true difference however, is in its challenge tombs. Previously a series of off-trail distractions to top up your experience points, in Shadow of the Tomb Raider these tombs actually feel like properly worthwhile things to pursue – not least because, experience point and ability upgrade rewards aside, they are highly enjoyable and challenging affairs that pack in some of the most intriguing puzzles the series has seen in quite some while.

Developer Eidos Montreal have also leveraged their experience from creating the Deus Ex games to fashion some of the largest areas ever see in a Tomb Raider game – with the numerous locations that you’ll visit in Shadow of the Tomb Raider being easily more expansive than any seen in the series so far. Whether you’re deep in the colorful throng of Cozumel or swinging through the Peruvian jungle, Shadow of the Tomb Raider never fails to present a range of diverse locations for Lara (and by proxy you) to marvel at.

Though Shadow of the Tomb Raider is a great entry in the long-running franchise and a solid action adventure that can be judged on its own merits, there are a small handful of niggles that might aggravate folks. The first of these is that when you collect artefacts, rather than having Lara automatically explain the background behind their history (as was the case in the previous game), you have to instead go into the menus and examine them yourself in order for the analysis to trigger – something that is very easy to be forgotten (I know I did).

Another annoyance comes from Lara’s aquatic pursuits. When submerged underwater, there is no oxygen indicator to inform the player as to when Lara might start to asphyxiate to death, which while covered by some subtle sound alerts and a gentle visual shaking of the screen, still feels like it should be more explicitly depicted than it currently is.

In the end then, though the changes that the developer have wrought here are largely beneficial, there is still an inescapable feeling that Shadow of the Tomb Raider feels like more of the same game that we played almost two years ago, rather than a fresh, from the ground up attempt at expanding the franchise beyond its familiar boundaries.

Though it might be lacking in expansive ambition, Shadow of the Tomb Raider nonetheless remains a beautiful, eminently playable and satisfying conclusion to a trilogy of games that have arguably represented the best incarnation of one of gaming’s most popular icons. If you consider yourself a fan of the series, or just a fan of well-made, thoughtful constructed action adventures in general, then Shadow of the Tomb Raider makes a resoundingly strong case for itself as your next purchase.

Shadow of the Tomb Raider from Square-Enix releases on September 14, 2018 for PS4, Xbox One and PC.

If you enjoyed this review why not check out our Tomb Raider history feature where we chronicle all the Tomb Raider games that have released on PlayStation platforms.

A reassuringly solid trilogy third act, Shadow of the Tomb Raider will certainly prove familiar. Nevertheless with better tombs to raid, improved underwater exploration and a more brutally framed narrative, enough adjustments have been made to underscore everything that fans have loved about the series for years.