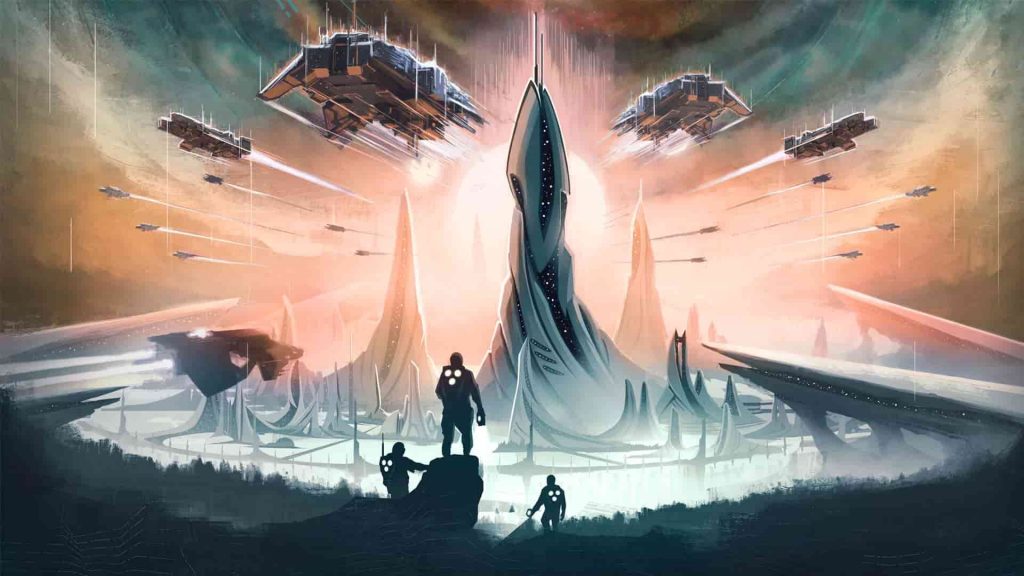 ‘Overwhelming’, is one word to describe Stellaris: Console Edition. ‘Expansive’, ‘compelling’ and ‘a bit clunky’ are others – but to be quite honest we’re getting ahead of ourselves here. Simply, on PS4 there is no other game that can match the sheer, eye-opening scale of Stellaris: Console Edition and indeed, it’s hardcore strategy PC origins are very clearly and unashamedly on display.

This is a game that does not strive for broad acceptance (though strides have been made to make it more palatable for console folks from a UI perspective), but rather the singular pursuit of taking one of the best, more comprehensive strategy games on PC and squeezing it onto PS4 with next to no compromise, and in this, developer Tantalus Media has succeeded grandly.

When folk refer to Stellaris as a grand strategy title, they mean it – everything about Stellaris is big. Starting with the premise of the game, the goal is broadly to take over as much of the galaxy as you can, whether that’s through peaceful diplomacy, war-mongering or the encroaching of much larger imperial ambitions. Though ultimately its in the minutiae of the details in which Stellaris both excels and initially, overwhelms.

Like all things, your interstellar ambitions start with small steps. Once you’ve chosen or created your race and homeworld, and then tailored your game to suit your playstyle (there is an almost endless amount of tweaking that can be done and each race has its own personality and attributes), your work begins in earnest with your starting star system. From here, you’re tasked with building new structures, supporting your local populace through effective government, researching new technologies and then surveying the rest of your starting star system for resources to support your intergalactic ambitions.

Then of course, you need to raise a fighting force, complete with the right people capable of leading it because not everyone you might outside your own star system will be quite as friendly as you might want them to be. This means developing new technology, building shipyards, upgrading your fleet, engaging in skirmishes and directing conflict on a galaxy-wide scale. Oh, and don’t forget you need to have other folk to help you run this fledgling empire too, and on this note means training folk from a wide range of professions such as scientists, governors, generals and more.

Stellaris then is a massive, initially overwhelming affair, but developers Tantalus Media have done their best to make the understanding of its sprawl of systems much more digestible than you might think. With a massive offering such as this, it can often be rather difficult to know what you should be doing next – especially in the early going. Luckily, the developer has included a handy situation log which always tells you what you should be doing next. Additionally, the action can be paused at anytime to allow for decision-making, or, sped up to allow you to complete research, construction and travel progress quicker.

Elsewhere, a full-bodied tutorial is comprehensive and stuffed with helpful toggleable tooltips, but it isn’t quite as intuitive as it needs to be. For example, going into your situation log tells what you need to do next, but it does not keep you informed as to your active progress outside of the log – and because everything is quite confusing early on, you can find yourself bouncing back and forth between the situation log and the raft of menus in order to get your bearings.

And this is the other thing. The magnitude of the commands and tactical possibility in Stellalris is such that the interface fills every pixel of your screen and adorns the edges of it with strips of icons of which each prescribe different groups of functionality. The downside of this everything-and-the-kitchen-sink approach to the UI is that Stellaris can seem a tad clunky to control at times on PS4.

With everything controlled by the humble DualShock 4 controller, of which Paradox Interactive have done their utmost to accommodate, Sony’s default pad is still a touch too slow to navigate the great swaths of menus and text that Stellaris regularly deals with, and certainly far less competent than the mouse and keyboard solution from which Stellaris originated. Though experience with the walls of menus and text eventually erode this to a large extent, it can still be a little off-putting to begin with.

Beyond the surface ins and outs of Stellaris, there is so much going on beyond just dealing with the minute to minute management of your own civilisation. Diplomacy and managing your relationships with other alien races for instance, is another key factor as you gradually inch your way across the cosmos. Not only do you have to contend with the political machinations of foreign empires and principalities, but you must also consider and deal with their traditions and racial instincts too, as friends become enemies and vice-versa as factions splinter and reform right in front of your eyes.

Equally, how you approach your first contact with alien life is crucial too and has far-reaching ramifications. Not only must you understand how other cultures communicate and articulate, but you quickly realise just how actions can speak for themselves too – interdiction action into alien space can carry with it a negative impression which can, in turn, negatively affect diplomacy going forward. Here, if you make a bum decision that angers an alien race, it’s not just one person that remembers it – the entire race does and their position toward you will shift accordingly.

There is so much to do and enjoy in Stellaris: Console Edition that is quite dizzying to say the least. From encountering new alien races, to discovering never seen before planets or researching some brand new technology which was previously unavailable, it always feels like there is a goal to strive for. Then there are the numerous endgame events – such as combating resurgent ancient evils which will test the limits of your alliance with other empires and factions, or cosmic calamities which tax the resilience of your colonies to survive and rebuild.

And the fact that Stellaris provides fresh, procedurally generated galaxies and huge number of tweakable parameters for every playthrough reinforces the fact that there is enough game here to last anyone for a very, very long time.

By its very nature and despite its overtures to newcomers however, Stellaris: Console Edition is still not ideally suited for rookie armchair tacticians, such is the often intimidating depth of its criss-crossing systems, mammoth scope of its tactical framework and initially somewhat clumsy seeming controls. Peer behind its wide array of menus, maps and text walls however and Stellaris: Console Edition soon reveals itself in another light.

More than just a mad grasp of galaxy-spanning tactical megalomania, each Stellaris playthrough feels like a cornucopia of different stories that you can’t stop thinking about as soon as you put the pad down. It’s you living the story of humanity breaking free of its solar system, writing the tale of a far-flung, warlike alien species putting its stamp on the galaxy, or chronicling the adventures of a colony ship setting sail across a vast ocean of stars.

Whatever tale you weave in the vast, ever-changing expanse of Stellaris: Console Edition, you can be sure it is one that keeps you coming back, time and again.

Published and developed by Paradox Interactive, Stellaris: Console Edition releases on PS4 and Xbox One on February 26, 2019.

The only offering of its ilk on PS4, Stellaris: Console Edition squeezes a galaxy of emergent strategy, discovery and story onto Sony's home console with very little compromise. Stellaris is certainly the biggest, if not one of the best pure strategy titles you can get on PS4 right now.