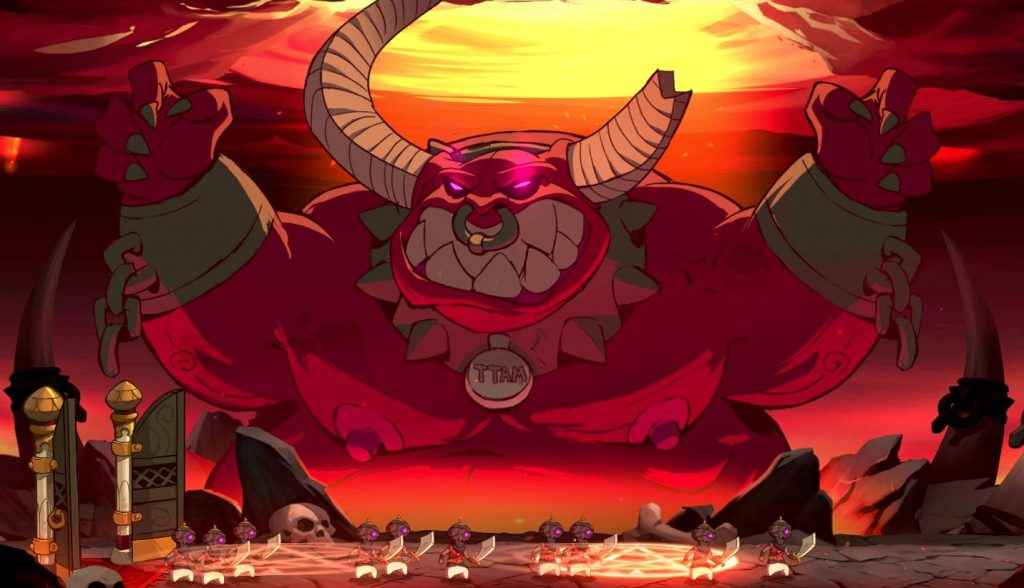 It’s difficult not to fall for Swords and Soldiers 2 Shawarmageddon. Tongue-tying title aside, the latest effort from Dutch studio Ronimo Games, is a wonderfully charming and deceptively deep take on the traditional RTS formula that whisks the formula into a 2D setting and throws in enough vikings, dragons and wayward food to satisfy genre newcomers and veterans alike.

From the off, Swords and Soldiers 2 Shwaramgeddon impresses on account of its visuals alone. Bright, colorful, charmingly animated and stuffed full of character, the aesthetic that Ronimo Games has used here proves effective in luring in non-genre fans who might otherwise be expecting something much more utilitarian and, well, drab.

Something else that helps lend Swords and Soldiers 2 a bespoke feeling of levity is the face-crinkling levels of humor that is threaded through every minute of the game’s duration, since pretty much every line spoken tends to be one that is utterly absurd, hugely funny or often a mixture of both.

Speaking of which, this latest entry in the RTS series also packs in a fair amount of content, too – boasting a ten or so hour long single-player campaign that is neatly supplemented by a local and online suite of multiplayer and skirmish modes.

In particular the single-player campaign is especially interesting. A story-based affair, the campaign’s premise is hilarious – as an impossibly huge viking called Redbeard (I mean, he does have a red beard so, yeah), you must lead your forces across Vikingland (I kid you not) and storm the gates of Hell to emancipate some very special sheep that have been stolen from the Viking’s shwarma shack (don’t ask).

A two-dimensional RTS effort, the army under the control of the player marches inexorably from one side of the screen to the other. The problem being that between you and your objective, there will be numerous enemy units, structures and heroes to deal with – each of which presenting their own challenge to be overcome. When you’ve beaten your foes and looted treasure along the way, you then gain money and mana that can be used to buy units, buildings and spells respectively.

With nearly 50 different units at your disposal, and each with their own abilities and purpose, Swords and Soldiers 2 is all about knowing which units, powers and abilities to deploy at the right time. Some units might be used for grunt work, such as moving items and loot from one place to another, whereas others might be special attack units that stymie the enemy with different elemental effects.

Then there are the spells and abilities. In addition to a range of different unit types, players take control of a variety of different, high-level characters that can use a regenerative pool of mana to cast aggressive spells such as lightning, or, as the Viking warrior Helga, she can sing a battlesong that makes all units in her aura attack much faster than before.

The key to winning in Swords and Soldiers 2 then, lay in being able to combine and create a synergy of all the different units, abilities and powers to fashion yourself a truly fearsome army with which to win every battle. As more units and powers come under your control, the deceptive depth of the Swords and Soldiers 2 RTS beats soon becomes apparent, as every battle becomes a test of your ability to juggle and marry the various capabilities of each facet of your army in accordance with the foes you face.

It’s not just unit types that you’ll need to deal with either, because in Swords and Soldiers 2 you are able to build structures that can buff your forces and/or attack incoming enemies. Again, it’s just one more string to the bow of complexity held by Romino Games which underlines Swords and Soldiers 2 as a far more sophisticated effort that you might initially give it credit for.

Swords and Soldiers 2 Shawarmageddon shines in both single and multiplayer

As assuredly robust as the single-player campaign is, it’s ultimately in the numerous multiplayer and custom game types where Swords and Soldiers 2 holds the majority of its appeal. With a variety of custom modes that allow you to combine three different factions each with their own unit types, players can wage war against each other both locally and online with a bespoke army that directly mirrors their chosen style of play.

Ultimately then, easy to get into, tough to master, awash in charm and with a great deal of longevity afforded by its skirmish and multiplayer modes, both fans and non fans of RTS games will find much to love in Swords and Soldiers 2 Shawarmageddon.

Published and developed by Ronimo Games, Swords and Soldiers 2 Shawarmageddon is out now on PS4.

An often gorgeous and frequently surprising take on the RTS genre, Swords and Solders 2 Shawarmageddon is a hugely enjoyable effort that both fans and non-fans of traditional strategy games will enjoy.