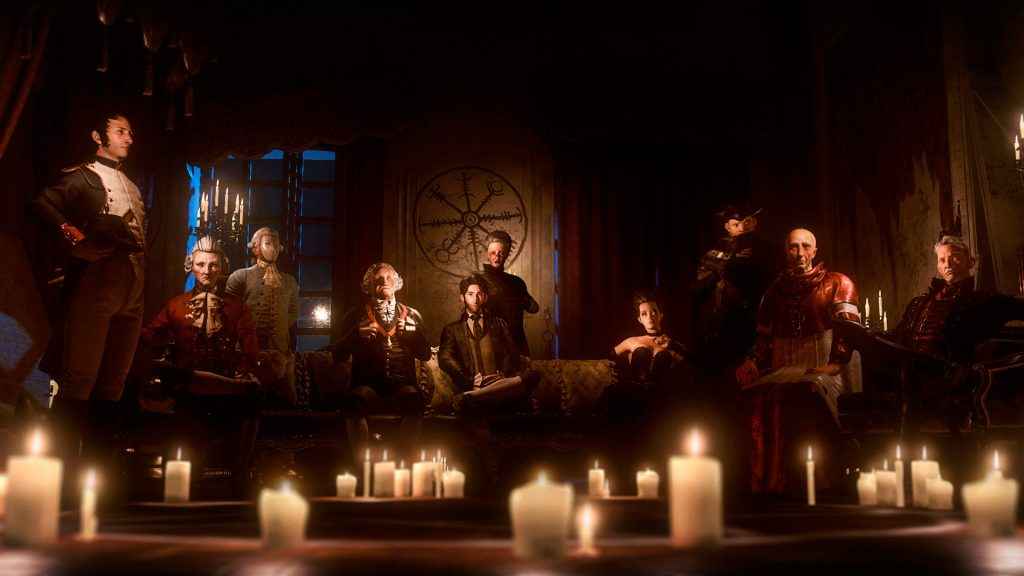 It feels like that since the rise of Telltale Games and the proliferation of the episodic adventure format, that the point and click adventure genre as a whole has gotten dumber. A lot dumber. With their emphasis on drip-fed storytelling and blunt force, binary decision-making, it’s fair to say that the likes of The Walking Dead and Tales from the Borderlands felt more like visual novels than challenging and smartly constructed adventures akin to the Monkey Islands and Grim Fandangos of old. Enter then, The Council.

The Council Is An Innovative Narrative Adventure Quite Unlike Any Other

Addressing the need for smartly told and constructed adventure games to, well, exist, The Council doesn’t take you for an idiot – quite the contrary; its delicate marriage of mature geopolitical subject matter, occult themes and art history indulgences all combine to craft an adventure that actually taps into the old grey matter, rather than leaving it stewing in your skull.

Set in the late 18th century, players control Louis de Richet, a high-ranking member of a secret society who is invited to an even more secret island to pursue a lead on his missing mother. More than just an excuse to go mommy hunting, the island itself is actually playing host to a conference that brings together the most important people of the time, including the likes of George Washington and Napoleon Bonaparte to name a couple.

With the gathering orchestrated by enigmatic aristocrat Lord Mortimer, Louis finds himself thrust into the midst of global conspiracy that looks to shape history as we know it, all the while dark forces unfurl their plans in the background. It’s high concept stuff for sure, but for all of The Council’s outward sophistication, it is a remarkably accessible affair.

Controlling Louis from a third-person perspective, players must guide him around the island and the mansion which sits at its centre, gathering clues, talking to people and generally trying to push forward in his investigation. Where The Council meaningfully differs from other episodic adventures is in how it employs a deeply layered RPG style progression and class system to change things up beyond the status quo.

As a highly educated member of a secret society, Louis can specialise in a wide range of different topics and disciplines raging from politics, to psychology, diversion and occultism. More than just learning for learning’s sake however, each of these skills can be employed in both exploration of the island and the conversation with those who inhabit it.

Your Choices Actually Matter In The Council

Putting points into agility, for example, might allow you to reach higher up a bookshelf to reach an item, whereas putting skill points into psychology for instance might allow you to exploit someone’s vulnerability in order to get them to confess some crucial fact or new piece of information. As such, the skill and RPG style progression system that The Council employs neatly dovetails into the refreshingly wide and significant range of choices that it offers the player.

Depending on where you put your skill points, which are in turn earned from discovering clues and exploiting the vulnerabilities of the numerous denizens of the island, it is entirely possible to steer the narrative in a totally different direction from another player. In this way, The Council doesn’t just cement itself as deep and roundly sophisticated effort, but one that has far more value when compared to its genre contemporaries, too.

Another wrinkle to this system that serves to further put distance between The Council and other narrative adventures is how the vulnerabilities and immunities system works. You see, if a character is immune against a skill you are using to hoodwink info out of them, say politics for example, you won’t be successful in your attempt to gain insight from them, whereas if a different individual is vulnerable against that same skill, you can use it over and over to exploit them for information.

And how do you gain an understanding of what someone’s immunities and vulnerabilities are? Well, you learn their behaviour and their nature by simply talking to them, observing them, or, discovering some clue or revelation about them, creating a dynamic that already sharpens the edge that The Council already boasts over its competition in the narrative adventure genre.

Then there are the puzzles. For the first time in what seems like *years* we have a narrative adventure game where the puzzles actually require some degree of thought, rather than them existing as mere speed bumps for the narrative. It’s refreshing and satisfying in equal measure to be confronted with conundrums that tap into not just your knowledge of events that have taken place in the game, but your code-breaking skills, knowledge of politics, religion and much more besides as well.

For all of The Council’s substantial narrative and RPG flavoured ambitions, it’s fair to say that the game isn’t quite as good as it should be when it comes to the standard of its technical execution. Though boasting an attractive art style, stiff animations and occasional visual glitches and clipping issues all serve to undermine The Council’s otherwise striking ocular offering; a pity given how good the game looks in the still shots interspersed in this review.

The lack of polish/budget is keenly felt elsewhere in The Council too. In addition to some poor voice acting that results in overzealous performances or the occasional cringeworthy exchange of dialogue (the main protagonist is especially guilty of this), The Council spends a great deal of time forcing players to retread through the same island manor based location from one episode to the next – a disappointing state of affairs considering that the richness of the world that the developer has crafted here simply makes you want to explore more of it.

Despite such technical shortcomings, The Council remains an almost endlessly interesting curiosity. A hugely innovative venture that leverages traditional RPG style progression systems, a mature narrative and setting into which meaningful choice is deeply baked and finally, puzzles that actually pose a challenge, The Council is an adventure with a twist that you shouldn’t ignore.

The Council is out now on PS4, PC and Xbox One.

Though the modest technical execution tarnishes The Council to an extent, it remains an innovative and clever adventure which does that rarest of things - it treats the audience as intelligent, educated individuals. With its sophisticated geopolitical backdrop, occult themes and in-depth RPG style progression and decision systems, The Council sets a compelling blueprint for the episodic adventure to follow.

The Council Episode One – The Mad Ones