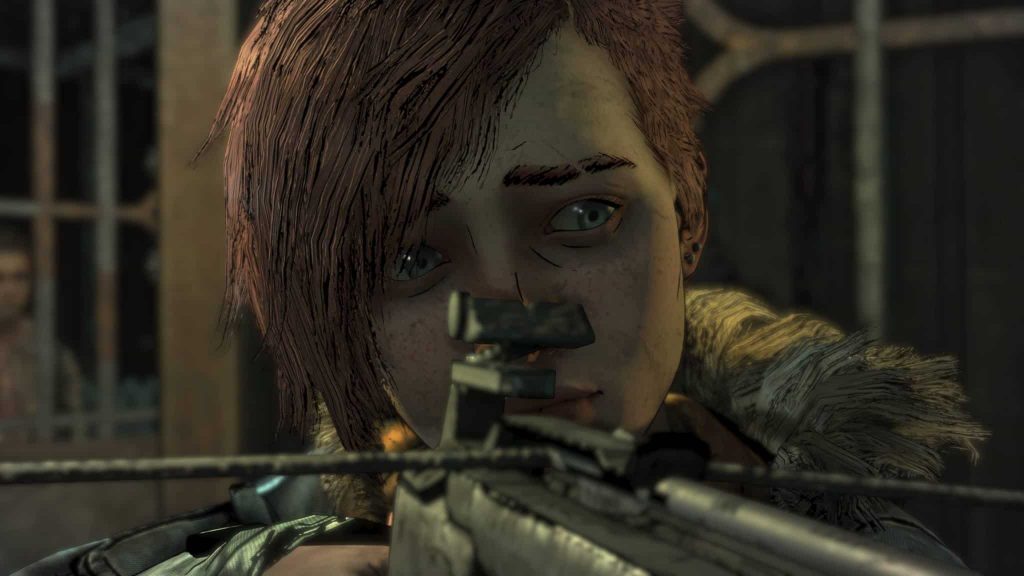 After the rapid-fire tragedy and frenetic pace witnessed in the previous episode, Suffer the Children, the middle act of the penultimate installment of The Walking Dead’s final season slows things up considerably, and in doing so ends up sacrificing much of the momentum that had been previously established in the process.

WARNING SPOILERS FOLLOW FOR THE PREVIOUS EPISODES OF THE WALKING DEAD: THE FINAL SEASON

‘Broken Toys’ shambles its way to a devastating cliffhanger

Rather than having our intrepid gang setting off to rescue their wayward number in earnest as we saw at the end of the previous episode, Ruby, Tenn, Mitch, Violet and the rest of the young ones all decide to have one final party to celebrate their friendship before they all head off to attack the raiders and reclaim their friends – not that there is any sort of urgency or anything (well, there is – but y’know).

The upshot of this pre-rescue shindig is that it cruelly undercuts the brisk pacing that was established at the end of the previous episode, whilst also giving ‘Broken Toys’ an unneeded slump in the middle of its duration. The silver lining of course, is that it provides additional exposition on each of the kids, but ultimately, the hamstringing of the swift pace that was previously established arguably feels more significant.

Elsewhere, quietly spoken newcomer James gets more face-time and as a result we not only get a bit of well-written introspection on his origins, but also a revelation of his unique philosophy on the Walkers – a set of beliefs that in turn has the potential to dramatically alter AJ’s outlook on the Walkers and what happens after the fact if he or Clem is bitten.

Ultimately, James makes an intriguing addition to the cast and his previous membership of a group that was so heavily featured in the comics, and now in the mainline AMC television show, means that he’s always an interestingly mercurial presences whenever he appears on screen.

Speaking of AJ, ‘Broken Toys’ once more rams home the notion that Clementine’s actions are intrinsically tied to the maturation and orientation of the young lad’s moral compass – and the torture that Clementine follows through with (or not) on Abel at the beginning of the episode proves to be a key difference maker in this respect.

In fact, so too is the justification (again, or not) of AJ’s killing in the first episode used to reinforce or rebuff his behavior, and the fact that it is time and again referred to here lends a sense of true weight to that decision.

Beyond his hurried growth, ‘Broken Toys’ also reflects its namesake through AJ and the other kids in other ways during this episode. Chiefly, AJs lack of experience of the world before manifests in a naively charming way early on, as he refers to a pier as a ‘wood street in the water’ – a statement that is as innocent as it is tragic since we all know it is highly unlikely he’ll experience anything remotely resembling pre-apocalypse normalcy.

When ‘Broken Toys’ does kick things into gear in its final act however, it rediscovers that brisk, savage pacing which characterized the first two episodes in this final season so definitively and ends things on a high note – a thoroughly action-packed and brutal final hour or so that stands in stark contrast to the meandering story beats which preceded it.

Indeed, as the body count rises and Lily once takes center stage as one of the most deranged, morally vapid villains the series has ever seen, The Walking Dead: The Final Season once more would seem to be the sort of compelling stuff it resembled back in the day; it’s just a shame that ‘Broken Toys’ takes so long to get there as we wind down to the final ever episode of Telltale’s The Walking Dead.

Published and developed by Skybound Interactive, The Walking Dead: The Final Season is out now on PS4, PC and Xbox One.

Uneven pacing and a slumping middle act detract from a brutally action-packed cliffhanger that duly sets up the final ever episode of Telltale's The Walking Dead.