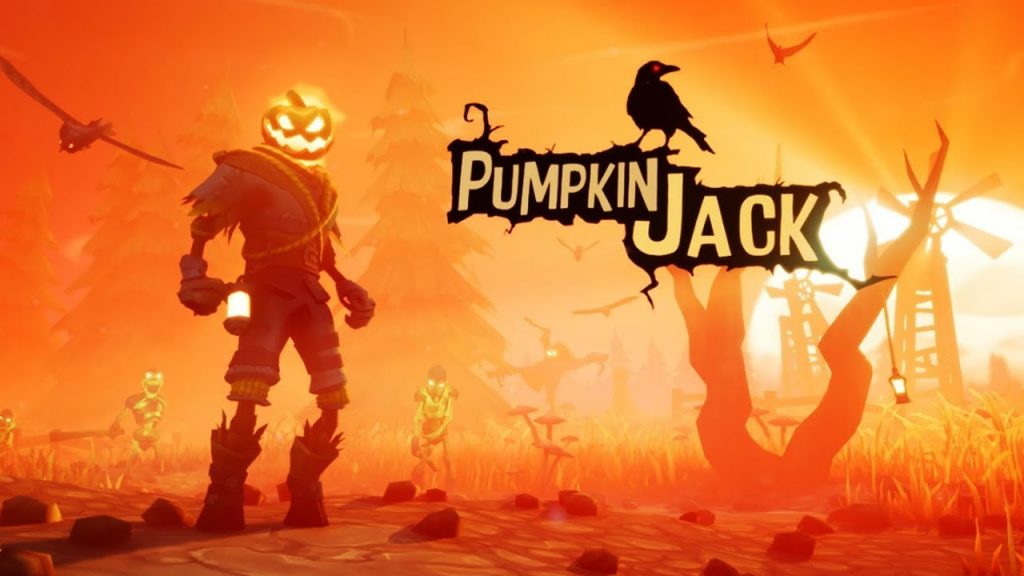 Pumpkin Jack PS4 Review. When I discover that a game has been written, designed and programmed by just one person, I am usually so impressed with this feat of technical skill and passion-fueled persistence that if fills me with an inner warmth.

Nicolas Meyssonnier started development of Pumpkin Jack in 2017 and the fruits of his labours are finally available to sample on the PS4, the press release revealing his two key influences to be PS1 classic Medievil and PS2 3D platformer Jak and Daxter. So does his love letter to classic retro platformers result in him getting to fourth base with gamers, or is it merely a Halloween hand-shandy in a spooky bedroom?

Sneaky Jack, a felon gently toasting in Hades is promised freedom and redemption if he returns to earth to slay a Wizard who has cleaned up the baddies, thus rendering the world a happy and harmonious place. Jack’s soul is crammed into a Pumpkin and reanimated for his mission and the game begins in earnest once he receives his instructions and training from a degenerate owl.

Pumpkin Jack exudes polish from the off, with beautifully rendered cut-scenes, plausible voice acting and a sheen of audio / visual presentation on a par with a large studio 20 years ago and a small studio now. Admittedly the bar has been set relatively low by aping the style of the aforementioned PS1 and PS2 classics, but nonetheless it’s still an impressive feat for one man, let alone a small team on a similarly sized budget.

The humour is well judged and takes the edge off the spook factor meaning that it’s suitable for kids who are worryingly desensitized from a diet of GTA5 and Netflix horror films, or for anyone aged over 10 who likes some tongue in cheek Halloween thrills. Aside from the slightly more sinister looking bosses, you’ll be battling a selection of comic book skeletons, oversized rats, winged lizards, and ghostly skeleton bats so there’s nothing much here to induce nightmares. 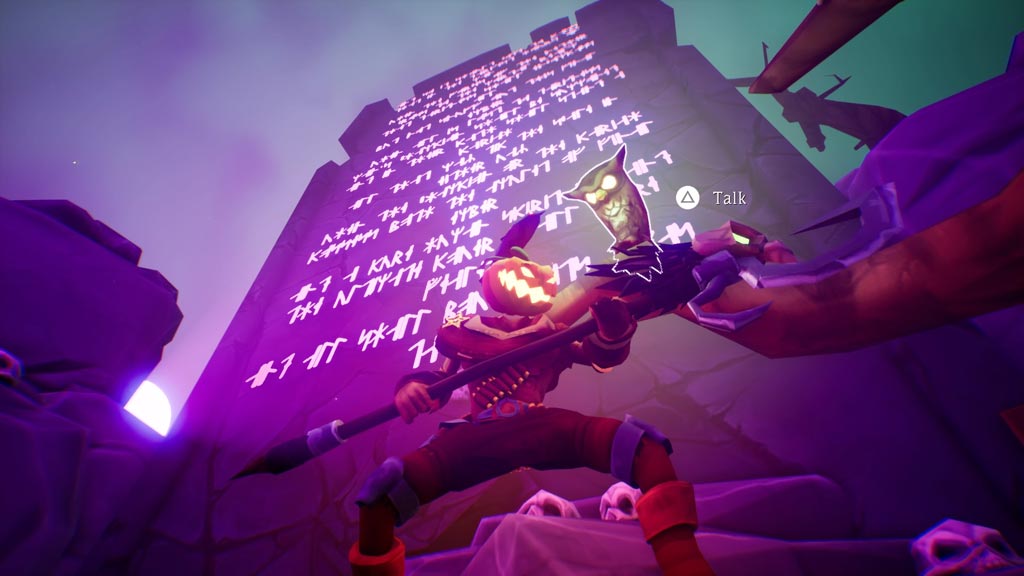 The main crux of the action is third person 3D platforming, with a jump and double jump option for climbing, some Crash Bandicoot style timed jumping sections and some careful balancing on planks. Amongst the standard platforming fare are some exhilarating mining cart and horse riding sequences which are well placed to add variety and quick time action and they’re great fun to boot.

Soon after you start the game, you’re joined by a crow sidekick who settles upon your head and can be used to shoot distant foes with a swooping attack activated by L1. Otherwise, attacks are carried out with a spade until you defeat the end of level boss and are awarded their weapon as a prize. As to be expected for a retro platformer, it’s a simple spin and bash fighting mechanic, but it’s well executed and killing multiple skeletons with your garden tool is quite satisfying.

Your energy bar can be depleted during fights so smashing up the game furniture boosts your health until you get to the next regularly placed cauldron checkpoints to save the game and restore your energy. The developer has also wisely added mid-point autosaves during particularly long tricky sections, avoiding too much in the way of frustration inducing punishments for dying. You don’t have ‘lives’ per se, but the game informs you how many times you’ve died so far and embarrasses you with an amusing sarcastic remark. 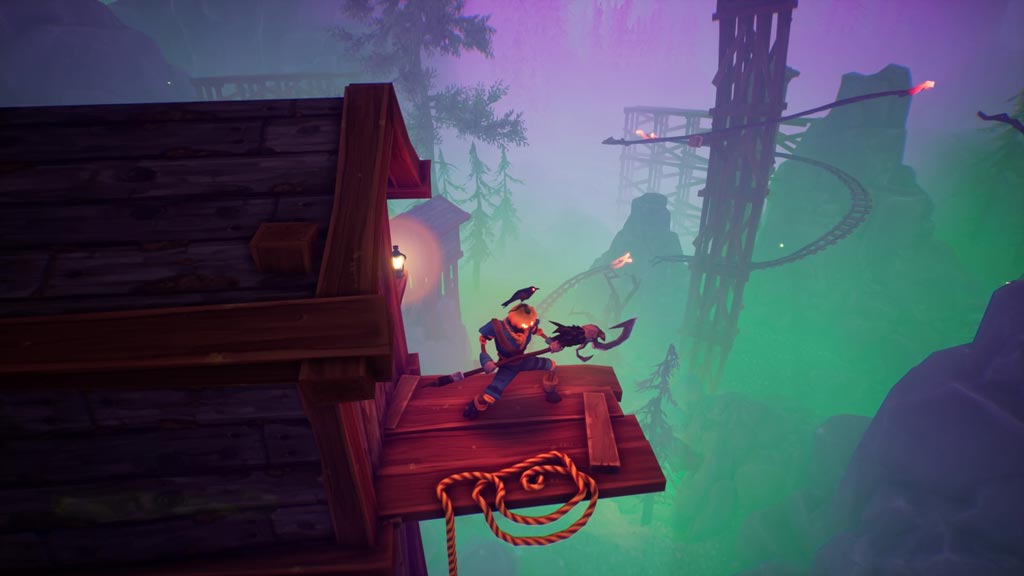 3D platformers are always up against a combination of hard to judge distances and obscured platforms but Pumpkin Jack does a good job of avoiding too many of these annoyances and most of the time, leaping around the wide variety of levels is highly enjoyable. The indoor platforming elements are the least satisfying as you’re restricted by ceilings and too many vertical struts and occasionally are left with no clue as to which way to go when there’s a hint of non-linear level progression. A direction arrow or map were conspicuously absent in a few cases but it never became a major problem.

Each level has 20 collectable skulls hidden within their nooks, and most of the time they can be ferreted out without too much problem, particularly on the levels which are totally linear. Even if you don’t manage to get them all, you can cash in the ones you’ve grabbed at a shop which sells new outfits for Jack – a neat extra element displaying the developer’s determination to add depth and replayability as well avoiding any real repetition as you progress through. 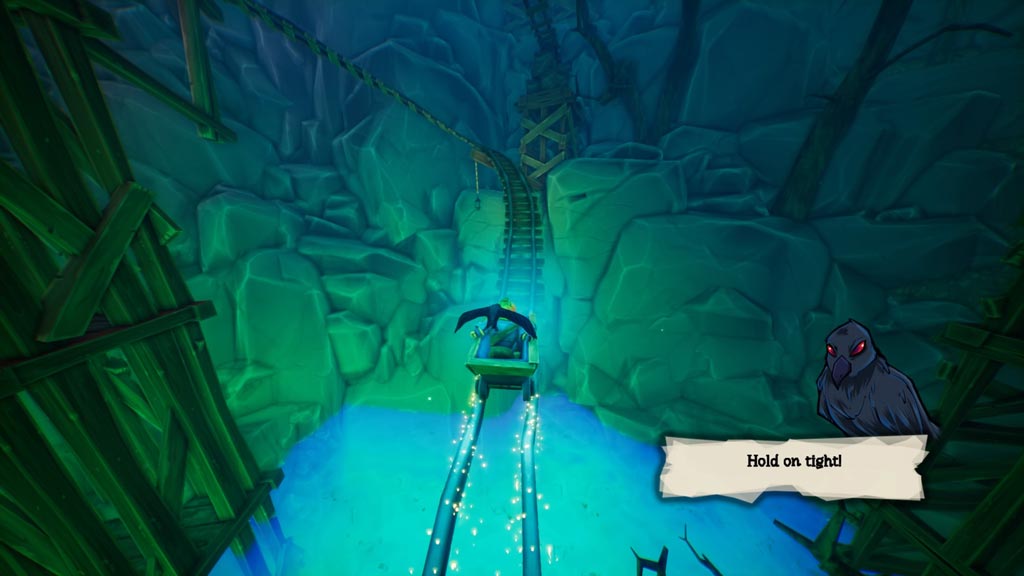 Another example of going beyond the call of duty are the Pumpkin head mini games where Jack pops his head off and scutters around like a bulbous spider with limited jumping abilities. These are basically indoor switch or memory puzzles, not a million miles from some of Lara’s optional tombs, and Jack’s head is usually tasked with bashing a bomb around some tricky levels in order to blow open a door for the rest of his body to get through. These diversions, though simple, were really well designed and managed to break up the normal levels nicely without distracting too much from the flow.

Graphically, the game manages to impress on quite a few occasions, particularly on the high altitude platform sections which feature huge draw distances, a beautiful level of detail and a genuine sense of vertigo. The swamp level features some lovely ghostly effects on the wooden bridges and platforms and the musical mushroom completion sequences are magical in their iridescence. 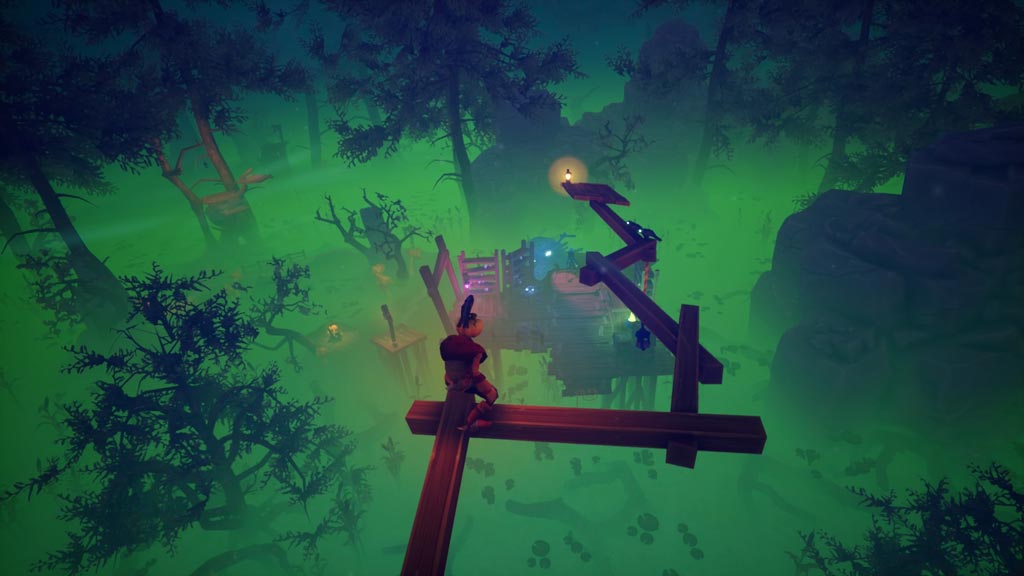 Jack Of All Trades?

While Pumpkin Jack is busy paying homage to a host of its influences, its never going to win a prize for originality, but the sheer verve of the design and the simple addictive gameplay makes it a lot more than the sum of its parts. As an indicator of what Nicolas Meyssonnier might do next, it’s highly promising and a great start to a career in game design.

For any fans of old-school 3D platforming, I can heartily recommend Pumpkin Jack for some cozily familiar jumping and spinning action which has been lovingly crafted by a true enthusiast who has a full understanding of why his influences were so playable.

Pumpkin Jack is out now on PS4.

Despite a dearth of original ideas, Pumpkin Jack is a highly accomplished paean to the classic 3D platformers of yesteryear from a solo developer. It's packed with variety, beautifully designed and highly playable so highly recommended for fans of the genre.