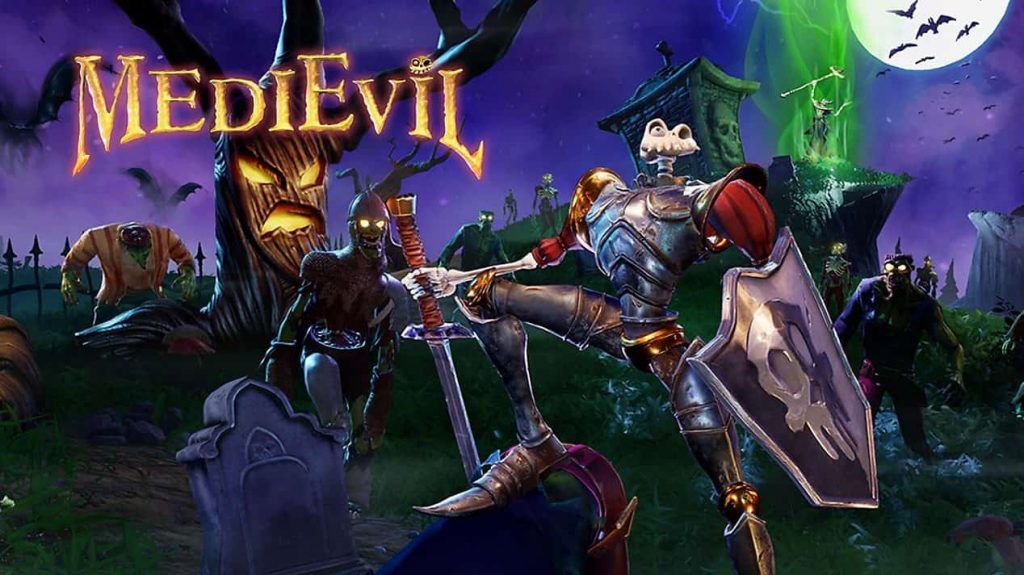 Sir Daniel Fortesque, the protagonist of MediEvil who died in battle saving Gallowmere from the evil sorcerer Zarok, has long been renowned as a hero. In reality, Sir Dan’s death was less than heroic as he died from the first shot fired and promptly took an arrow in the eye. Now Dan is getting a second chance to become the heroic knight and finally live up to his legend thanks to the MediEvil remake from Other Ocean Interactive.

MediEvil Has Been Wonderfully Resurrected For PS4

MediEvil was first released for the PS1 in 1998 and was developed by SCE Cambridge Studio. The hack and slash, action-adventure quickly became a cult classic that spawned a sequel and the PSP port, MediEvil Resurrection. After that Sir Dan and MediEvil went dark leaving fans wondering if we would ever see a third game in the beloved series. 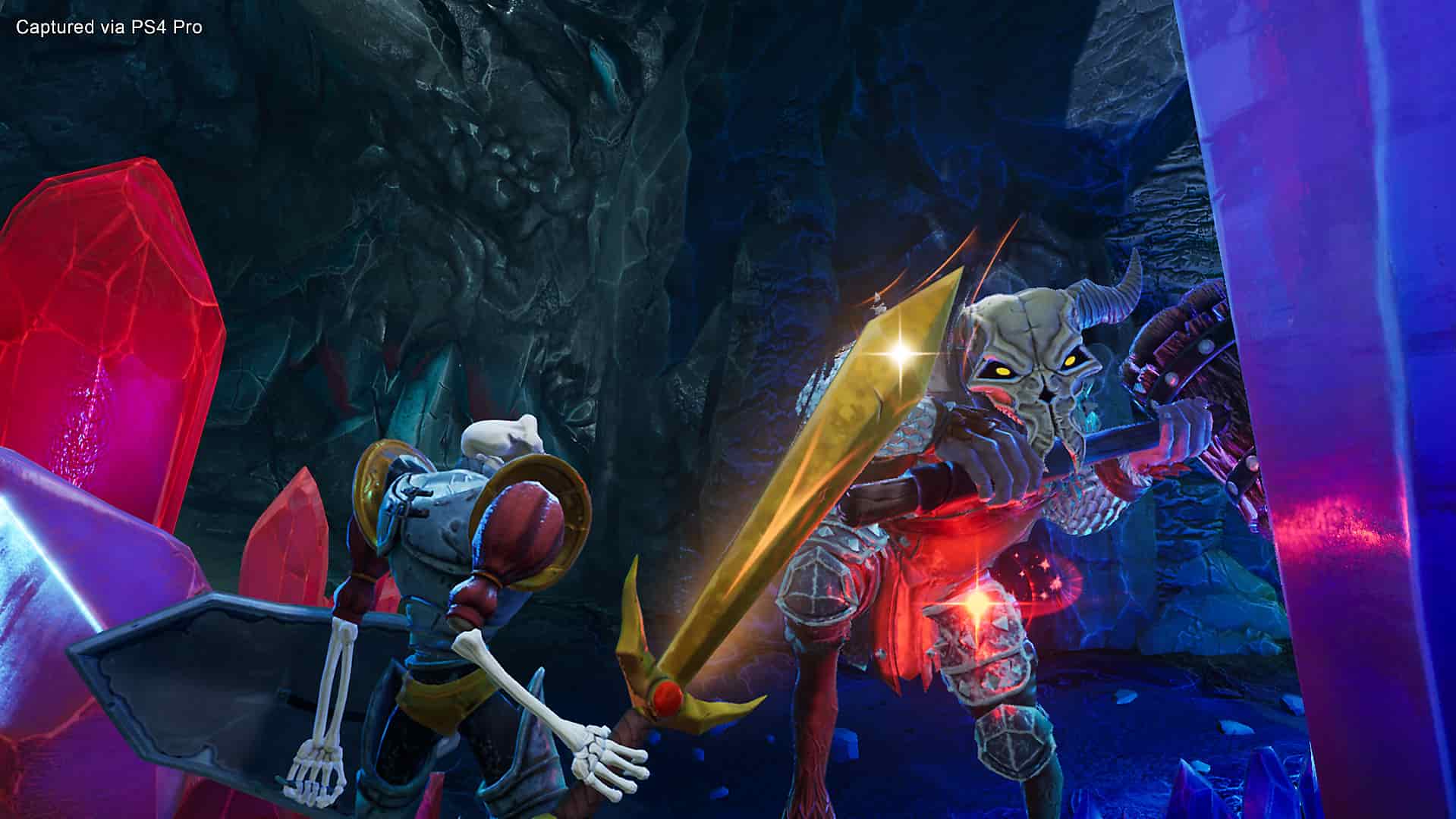 My introduction to MediEvil was through the demo disc that was included with my PS1 console and it was love at first sight. Indeed, it’s fair to say that my pre-Dan gaming habits were pretty indiscriminate and without an alliance to any one platform. MediEvil was like nothing I had played before and to this day I still credit it as being my favorite game, if I were forced to choose. It was also the start of my very long and lasting love affair with PlayStation.

MediEvil begins one hundred years after The Battle Of Gallowmere with Zarok out of hiding and stronger than before. He casts a spell that will bring his undead army back to life. This inadvertently resurrects his nemesis Daniel Fortesque who will now get the chance to redeem his honor if he can finally defeat Zarok. This won’t be an easy task considering Dan is now just a one eyed Skelton who’s bottom jaw is missing.

Sony and Other Ocean promised a remake that was fit for a king, one that would use and build upon the game’s original source code and not the hideous Resurrection port. For as badly as I wanted this, when I started up MediEvil on my PS4 Pro for the first time I was a bit apprehensive. Perhaps they completely butchered this shiny new iteration of the game I have loved so much, or maybe even my sense of nostalgia was just holding on to something from my past that wasn’t suited for this generation.

Once the opening scene started and I was greeted with the familiar skeleton at the headstone inviting you to start a new game, all the feels come flooding back. For the next several days I lived and breathed nothing but MediEvil; in fact I played through the game in its entirety twice. There’s a reason for that, and we’ll get to that later but let me just say, MediEvil is as good, if not better than I remembered.

I Am The Pumpkin King

I always thought MediEvil was ahead of its time both in gameplay and its distinguished look that was inspired by Tim Burton’s The Nightmare Before Christmas. The graphical upgrades implemented here are absolutely stunning. Some foliage and other cosmetic objects were added to fill in the environments but largely everything looks and feels just as it did in the original only prettier and more vibrant.


I had forgotten just how complex MediEvil was, too. There are over fifty unique enemy types which was unprecedented for a game in 1998. It also features intricately designed levels that contain hidden areas and objects which often require a revisit when you acquire better gear that is either found elsewhere or unlocks through player progression. Oh yeah, and then there are the puzzles, those diabolical puzzles that are at times so clever that even when you want to break your controller or tear out your hair, you can’t help but stop and admire their genius.

Combat remains much the same as it did in the original, it’s a bit flawed but that makes it kind of precious and endearing. Dan is not a graceful killing machine, he’s a bit shall we say, clumsy. Sometimes he misses jumps and loses his balance, but after awhile you get used to his minor shortcomings. Luckily, there are a slew of weapons of both melee and ranged varieties, as well as shields that you can acquire from the Hall of Heroes at the end of each level.

The weapons and gear won’t always be handed to you for merely playing a level. You earn a visit to the Hall of Heroes at the end of a stage only if you have captured enough souls by defeating enemies, but don’t leave the level without picking up the hidden chalice you need to transport them, or there is no visit to the Hall of Heroes for you. Some of the coolest gear, such as the magic chicken drumsticks which turns enemies into a roasted chicken that you can eat or the dragon armor which gives you the power of fire breathing can only be acquired from doing side missions, and are thus well worth doing.

Get Good Or Die Trying

One other thing about MediEvil is that there are no check points! If you start a level that has taken you a half an hour to complete and die right before you see the green light that indicates the way out and ends the level, it’s back to the beginning. None of the levels are Skyrim sized but still, it’s a challenging game all the same and on the plus, you often find stuff you missed on your second or thirteenth play through.

Dan’s health does not regenerate but there are green health vials and pools that replenish it. As well as his health bar, Dan can carry life bottles which are basically another life that refill his health. These can also be replenished with the vials and pools found strewn about the game. If you play your cards right, you can end up with nine life bottles when you face the final boss battle.

All of this glorious gameplay is tied together with one of the best musical scores to grace a video game. MediEvil’s celebrated soundtrack was composed by Bob and Barn who not only re-recorded the music but also added a few new compositions for this remake.

Performance wise, I didn’t encounter any major glitches or catastrophes other than that one time when an imp stole my sword and I was unable to retrieve it. I could see it floating there after smiting out the thief, but I was unable to pick it back up. It was safely back in my inventory after I completed the level. That’s not to be confused with when the imps take your stuff and you leave a level without retrieving it, since then you must pay a hefty price from a merchant gargoyle to get it back.

They Keep Calling Me

The replay value in MediEvil was always high but now thanks to Lost Souls, its through the roof! If you are wondering what are these Lost Souls are I speak of, they are little quests that are found on every level but play out somewhere else in the game that you must determine with only a few cryptic clues. These are entirely new and did not appear in MediEvil or MediEvil Resurrection.

While I don’t want to entirely give away the secret these Lost Souls hold, I will say that there is a very good reason to complete all twenty of them. If you do, it will trigger a bonus unlock that is so epic, it will surely blow the minds of fans of the old MediEvil.

MediEvil is nearly a perfect game that has held up incredibly well thanks to its robust content, expertly designed levels, and super fun gameplay. With that being said, I can see some gamers new to the series being slightly frustrated with the sometimes wonky camera angles, lack of checkpoints and Dan’s clumsy but classic combat style. However, what it lacks in precision is easily made up in charm and irreverent wit.

Other Ocean has revived MediEvil in a way that stays true the original while making just enough changes to keep Sir Dan relevant for the future. Hopefully this newfound spotlight will bring MediEvil out of it’s cult status and send it directly to into a third game, or at least allow MediEvil 2 another bite at the apple.

MediEvil finally makes the transition from PS1 to PS4 in a spectacular new remake that fans have been clamoring for. The Tim Burton-esque beauty and clever gameplay has held up incredibly well for a twenty-year-old game but some precarious camera angles and clumsy combat keep the game from perfection.