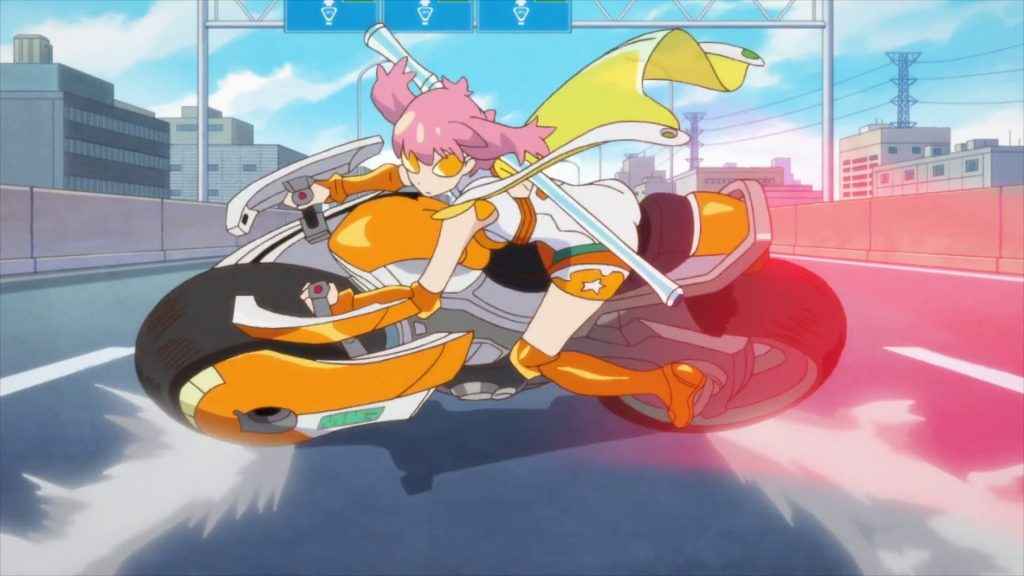 When the opportunity to review Punch Line came about I was very hesitant to take it on due to its pervy advertisements. However, now that I’ve had a chance to play through the title, I can tell you how happy I am that I did. Punch Line is easily one of the funniest titles I’ve played this year and – even more surprisingly – has a deep and emotional story to boot.

The story in Punch Line sees you take on the roll of Yuta, a young boy who after looking at women’s panties explodes with a powerful rage of strength and power that gives him superhuman abilities.

During a high-jacking of a transportation bus, Yuta comes face to face with famous crime fighting hero “Strange Juice.” During the scuffle, Strange Juice finds herself in a predicament and Yuta rushes to her rescue forcing himself and one of the high jackers off a bridge and into the ravine below.

Yuta then wakes up in his apartment complex with four women. He quickly realizes he has no legs and looks like a ghost. At this point a flying talking cat begins to explain to him that someone has possessed his body and he must get his body back by finding an ancient text called the Nandara Candara.

The Fantastic Characters Are A Stand Out In Punch Line

It sounds like a weird premise, but boy does it grow into a great story. It’s not just about Yuta getting his body back, the story follows an apocalyptic cult, government conspiracies, and a dangerous foe dubbed the “Turtle Man” who looks an awful lot like Hunk from Resident Evil 2. The story finds a way to connect all of these plot threads into one story and it does it in spectacular fashion.

Punch Line at its core is a visual novel. Most of the time you will find yourself reading plenty of text boxes, or unless you understand Japanese, listening to the fully-voiced over lines. The story touches on all the emotions one can have.

Punch Line Is A Visual Novel To Remember

Although most of the scenes are incredibly funny, I actually had tears coming out at some points. There are moments of sadness and I actually felt emotional especially later on in the story as I grew so attached to all the characters.

One of the most important aspects of Punch Line comes in its pervy premise. Yes, Yuta loves to look at panties but this habit is also his biggest weakness. If Yuta looks at panties for too long he will cause an asteroid to hit the earth and kill everyone on it. It sounds weird, (believe me I was scratching my head a lot) but it’s all explained and makes more sense then I could have ever expected it too.

Playing Tricks On Your Friends Is Like A Big Long Puzzle

It’s refreshing to experience something that is clearly pervy, but the goal is to avoid being a pervert as much as you possibly can. That all comes into the actual gameplay. Although Punch Line is primarily a visual novel, it does bring with it some gameplay.

In order to achieve his goal of returning to his body Yuta must become a stronger spirit to allow him to do more things as a spirit. At first, you can only knock objects off surfaces, but as you play through the game you can then fully grab objects and move them to different locations and even leave written messages on phones and glass surfaces.

Simple To Play And Entertaining To Watch

In order to become stronger, Yuta must play tricks on his female neighbors to scare them and collect spirit fragments. A meter on the bottom right displays how frightened they are until it’s always full, which will require multiple scares.

You don’t get to actually move around. Instead you simply move the camera around and look at all the objects you can manipulate which are highlighted for you. Some objects will have no effect, others will do the trick, though you can’t just manipulate everything hoping to get the right combination.

You only have enough attempts to manipulate a set amount of objects. The reason is that it takes to much spirit power and you get tired. So you have to succeed with a certain amount of tires.

The other big aspect of the gameplay is creating a “Trick Chain.” A Trick Chain is a serious of events that will lead the girls into doing what you need them to do.

Moving from room to room, you have to set up events that will get one of the girl’s to notice what your message is. One such event involved removing a magazine that was in a microwave. Since I wasn’t strong enough to open the microwave door myself, I had to set up a series of events that lead one of the girls to the microwave to notice the magazine and take it out of their own accord.

As you set about these tasks, you must avoid looking up the skirts of these girls or you will fail and have to start over. A meter will build up telling you how close you are to failing the longer you stair at panties, which also makes it more difficult to look away as you get resistance from the camera as you try and look away. If that meter fills up it’s all over and humanity is doomed.

Graphically, Punch Line is passable. The character models tactfully look pretty good, but the environments sometimes have stretched textures. The voice work is really well done as well, using the same voice cast from the anime, while the soundtrack is very catchy, albeit a little repetitive.

With a fantastic story, great humor, and a fantastic set of characters there isn’t much not to like. Now that I’m done playing Punch Lin.e all I want to do is go watch it’s anime.

Punch Line tells a fantastic story amidst all the chaos that takes place. It may seem pervy from its advertisements but there is a charming experience here that you will surely remember.