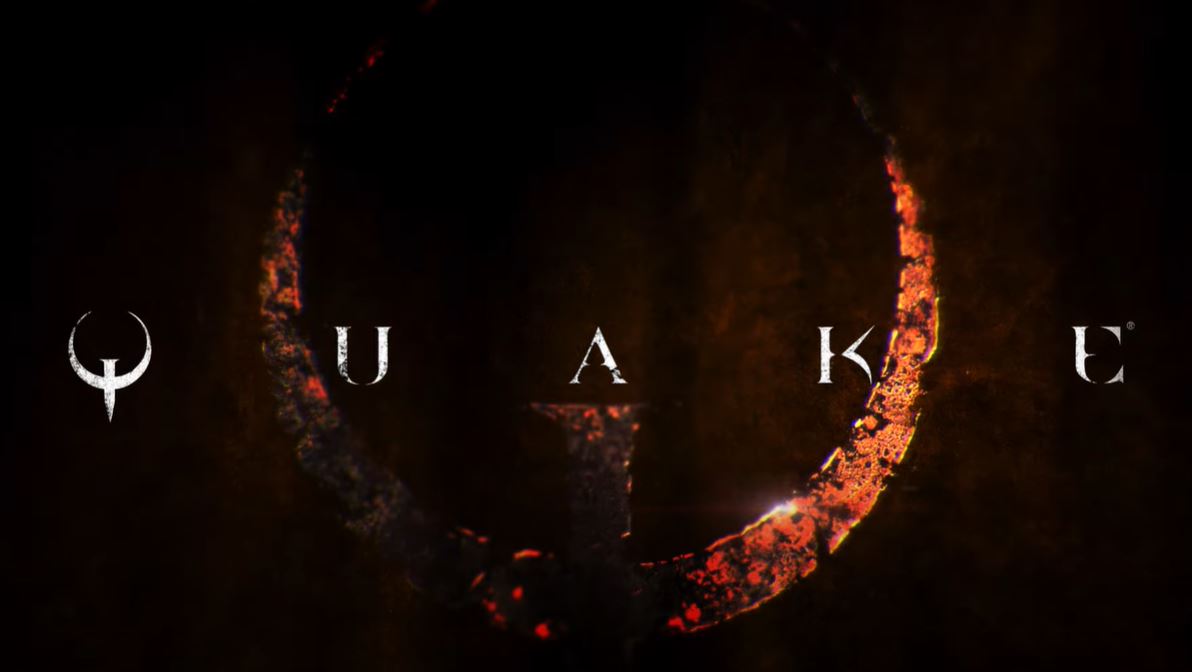 Quake PS4 review. Quake will always have a special place in my heart. One of my earliest memories in which my brothers and I got our beastly 486 PCs together for some good ol’ fashioned LAN deathmatch shenanigans (it was the mid-90s, I grant you), Quake always seemed to me to be something akin to ‘Shooter 2.0’, ushering in an all-new generation of fully 3D shooters that made the likes of DOOM and Duke Nukem 3D feel flat and desperately limited by comparison.

Now 25 years on from its original release on PC, Quake has somehow re-emerged on PS4 from the now Microsoft owned Bethesda Studios. Rather than some sort of fancy pants remake that runs the risk of tinkering too deeply with what made Quake such a classic in the first place, id Software and MachineGames (the folks behind the excellent Wolfenstein series reboot) have wisely decided to remaster the original Quake instead, bringing one of the best 3D shooters ever made to contemporary console hardware with verve.

On the face of it, Quake would seem to similar to FPS genre godfather DOOM, in that it boasts a sprawling single-player campaign split across a number different visually different areas and episodes with increasingly difficult enemies that you must be rid of in an ultraviolent fashion. That, however, is largely where the similarities to DOOM end as Quake sought (and succeeded) in improving upon id Software’s classic shooter in just about every way imaginable. 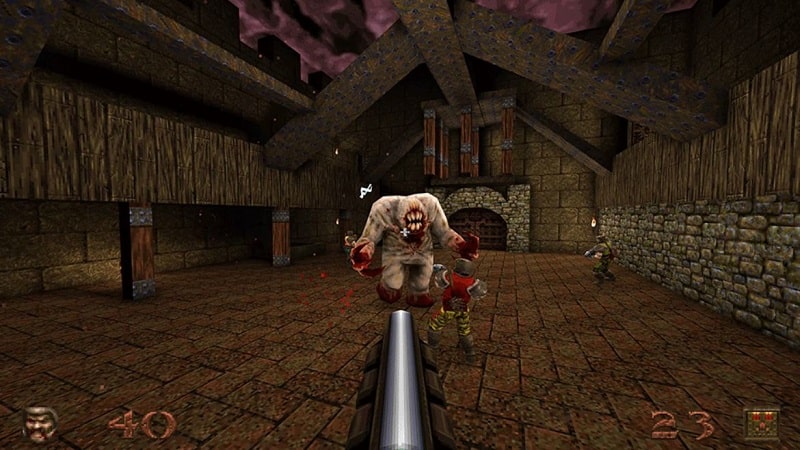 Arguably the biggest change that Quake brings over DOOM is the graphics engine. Much more than just a generational leap in geometric complexity, texture detail and lighting, Quake’s embrace of a fully 3D game engine allows players to explore every level completely, as the newfound ability to completely look up and down feels immensely freeing after the head-locked shenanigans of DOOM, while the more sophisticated game engine also allows for far more complex level design to boot.

Developers id Software knew just what to do with the much more powerful toolset at their disposal too – fashioning fiendishly creative levels stuffed full of secrets and traps in a way that DOOM could only dream of. Indeed, this evolved level design found its way into Quake’s excellent split-screen and online multiplayer mode too, where tight corridors, chambers rich with verticality and cunning traps all combined to make Quake’s deathmatch feel like a furiously visceral dervish interlaced with a level of skill like nothing I had ever played before.

Another boon of Quake’s more complex level design and full 3D graphics engine was that combat felt much more satisfyingly kinetic than anything else. Players could now jump off of ledges and aim at all angles with the sort of grace that just wasn’t possible previously. Sure enough, all of this might seem trite to folks who take this sort of movement for granted and have long been weaned on more current shooters, but for the time Quake was absolutely revolutionary and even today, the movement and hyper-kinetic combat feels like it hasn’t lost a step. 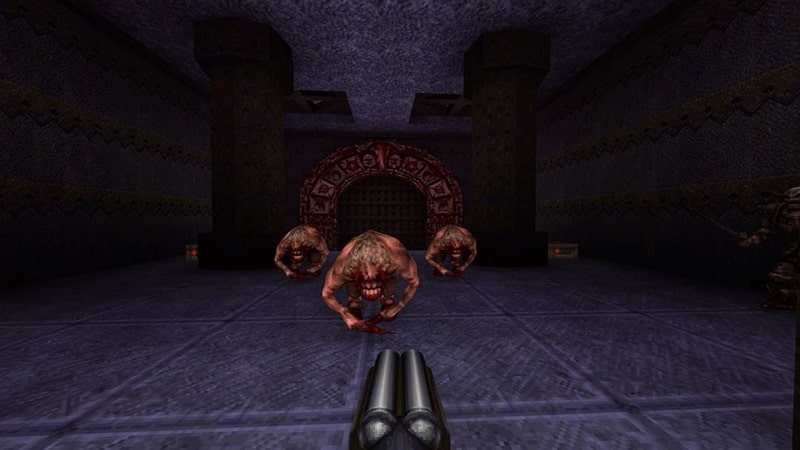 Elsewhere, another point of significant distinction between Quake and DOOM is that the former eschews the full-tilt satanic themes for a more broader range of grim themes, taking in influences from Lovecraft and others that results in towering cathedrals, foreboding stone keeps and ruined castles that all feel a world away from the usual destroyed bases and hellscapes that characterised DOOM. Sure enough, Quake perhaps does overindulge in brown and greens when it comes to colour, but ultimately, Quake’s dark worlds are a joy to explore and blast through thanks to their heady design.

Other differences between Quake and DOOM also abound. Per level, there are far fewer enemies to contend with in Quake, but yet, the enemies you do tangle with are resolutely challenging. From the chainsaw-fisted ogre that fires a grenade launcher at you, to the blood encrusted Shambler that just Hulk smashes its way through everything to get to you, each of Quake’s encounters can feel genuinely terrifying.

Additionally, when you’re not spending your time ripping and tearing (sorry) through Quake’s gallery of nihilistic foes, you’ll be attempting to dodge the many, many traps that Quake throws at you. Made possible by Quake’s fully 3D levels, you can routinely expect to be smashed by falling ceilings from above, dropped into lava pits from below, crushed from the side by massive spikes and generally messed up in all manner of ways that you might not necessarily expect. In Quake, the level itself as much an enemy as any of the monsters are. 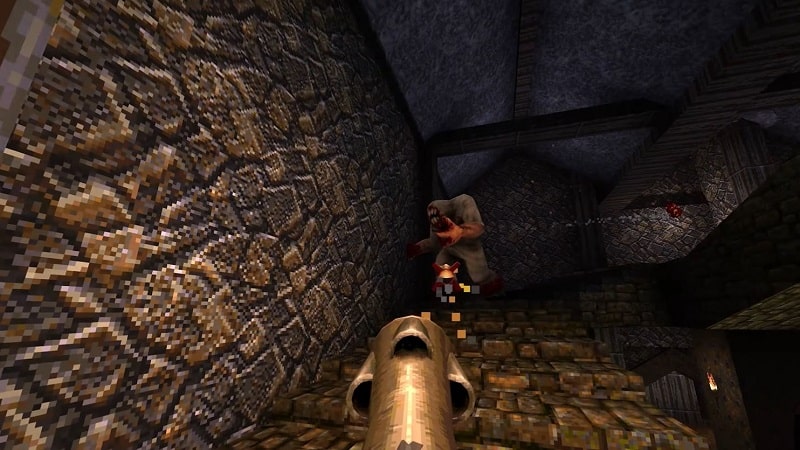 Like any shooter worth its salt, there’s a palpable joy to cutting loose with Quake’s selection of firearms. From the spaced out booms of the double barrelled shotgun to the bouncing thud of grenades fired from their launcher and the rattling roar of the Super Nailgun, the weapons of Quake are as timelessly thrilling as the game itself.

As mentioned at the top of the review, Quake is a remaster rather than a remake. As such, this means that Quake still looks like a product of its time, with relatively simplistic looking levels and enemies when put up against the shooters of today. However, this by no means a cash grab or lazy effort. Boasting 4K support on PS4 Pro and PS5, full widescreen mode (the original only supported a boxy 4:3 display ratio) and improved lighting, id Software and MachineGames have done a good job of polishing up this otherwise crusty venture.

There’s much more to admire about Quake’s re-emergence in 2021 than just the visuals, too. Not only does Quake on PS4 bring the vanilla game to the sweaty hands of folks everywhere, but it also brings all of the previously released additional single-player content and an all-new chunky expansion created by MachineGames to boot as well, cementing Quake’s current generation release as the (currently) definitive version of id Software’s face shooting opus. 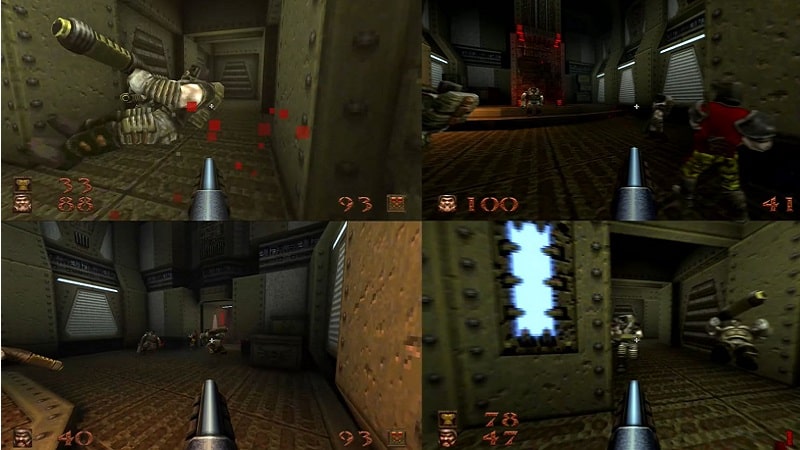 But there’s even more to this remaster, if you can believe it. Much like the recently re-released DOOM games before it, Quake supports the use of add-on mods too – allowing players to download all new content for the game including the hugely popular Quake 64 at launch. Speaking of content, Quake also brings a fully featured multiplayer suite to the table as well, enabling players to play online with crossplay or in classic local split-screen while also permitting the employ of bots to make up the numbers too. Heck, the bots even ‘talk’ in chat with a series of predetermined comments, so yeah, there’s that too.

Twenty years before Mick Gordon set our eardrums aflame with his thrumming heavy metal score in nu-DOOM, Quake had Trent Reznor’s Nine Inch Tails providing the aural backdrop to the player’s violent deeds. Seemingly able to survive the minefield that is modern music rights, I can happily proclaim that the complete Nine Inch Tails returns, infusing Quake with a kind of pulse pounding agency that fans of DOOM Eternal will surely recognise.

For the longest time I had thought Quake was lost to time. After witnessing DOOM ported to everything from consoles to refrigerators, I had given up on ever seeing id Software’s revolutionary shooter on modern hardware. I’m so glad I was wrong. Quake is here, Quake is brilliant and on PlayStation, Quake exists in its definitive form. Quite simply, at just £7.99/$9.99 it also represents a staggering value proposition that is just too compelling to ignore, so do yourself a favour – don’t.

Quake is out now on PS4.

Arguably the modern template for so many self-styled retro shooters, Quake has returned in stunning form. A stellar remaster, Quake not only maintains the essence of id Software's classic 1996 shooter, but it meaningfully iterates upon it too with all new additional content, mod support and crossplay. At a super budget price point, there is no reason to dive into one of the very best 3D shooters of all time.