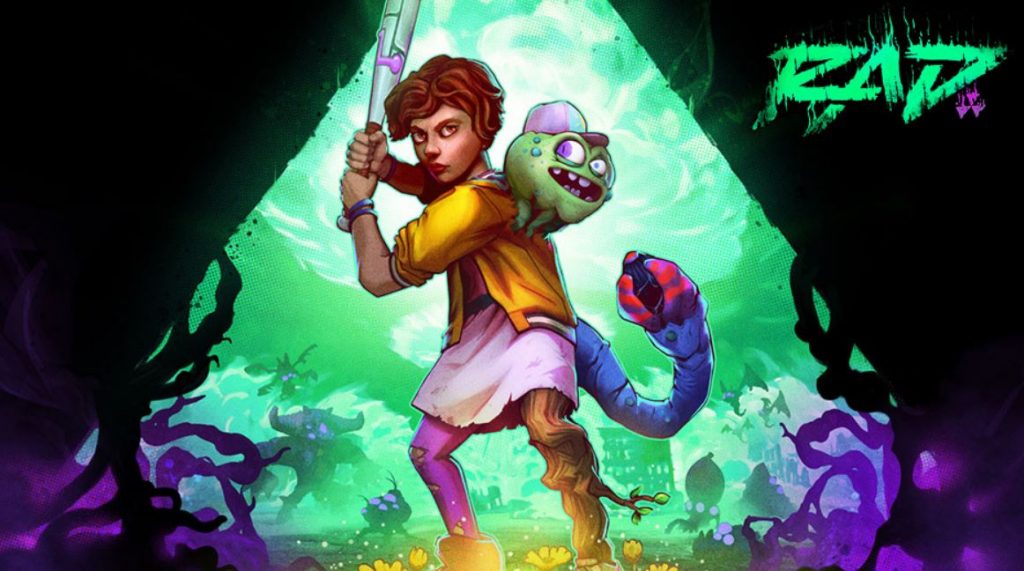 Roguelikes have quickly become one of my favorite video game genres in recent years. The feeling of the unknown and the randomness, which admittedly are not loved by everyone, really keep me interested and invested in the gameplay. I still play The Binding of Isaac every day and have played it for thousands of hours, over multiple devices and I still love it dearly. I still find new things daily and it never gets stale.

Not all roguelikes are created equal though, for every Isaac or Spelunky there are also a few duds that do not quite make the cut. Does RAD stack up against the competition?

RAD tells the story of a civilization recovering from not one, but two apocalypses. You must work out how to return life to the wasteland and more importantly, survive what horrors are left roaming around. RAD is set up like most roguelikes, you must navigate various randomly generated environments, battling mutants and gradually get stronger through acquiring various items and upgrades.

What I noticed about RAD very early on is its amazing variation, I was constantly finding new things. That remained true even days after I had started playing. You have to always be on your toes and adapt to your surroundings.

What makes RAD different from other roguelikes is the mutation system. As you roam the randomly generated wasteland you level up, by soaking up the rads from enemies and mutate. These mutations range from the frankly bizarre to the downright horrid. They come in two forms, Exo mutations and Endo mutations, Exo being activated weapon type mutations and Endo are passive bonuses.

There are some strange mutations to be seen, from chunky arms that can be thrown like boomerangs to crab legs that allow you to burrow into the ground. It’s completely insane and utterly brilliant.

Anyone who has played a roguelike over the last few years will feel straight at home playing RAD. You collect cassettes for currency, which can be spent at vendors dotted around the land. Floppy disks act as keys and must be used wisely for door access and to open chests. I appreciate how the currency and keys fit the aesthetic of the game. I like how only old technology seems to have made it through the double apocalypse. It’s all so retro and funky and I adore it. There are old tech and weird flora dotted throughout the levels as well.

Each stage is a randomly generated map filled with mutants, shops, mini-dungeons, caves, and breakable environments. They’re all well designed and fun to explore. As with all roguelikes, being successful depends on your ability to make the most of each area, use what you have, and combine the game’s systems to capitalise on every opportunity. Trying to combo mutations together, building your character and, gradually getting stronger is the key to success.

Progression comes mostly from your skills improving and learning the rules of the game’s many systems, but there are some small persistent upgrades that help. You have a hub that you can use between runs, it’s constantly evolving and slightly improves your chances of survival each time you visit.

What makes a good roguelike though are the small steps you make between runs to make your future runs easier. Even if you have a bad run and believe me, it happens, you can still unlock something or maybe even bank some cash between stages for use on future runs.

Having cash banked unlocks some sweet bonuses too, such as being able to use your banked cash at vendors, for a nominal fee. It’s a great system. I like how RAD handles this part of the game and I always felt like I was improving and maximizing future runs into the wilderness.

There is also a myriad of other systems thrown into the mix as with most roguelikes. Artifacts provide bigger bonuses like doubling cash earned or reducing key requirements on doors (i.e two keys lowers to needing just one). Bosses guard every area and there are people to help with small quests, rewards are handed out if you complete those quests.

With so many variables, room for different character builds, and gameplay options, RAD is packed with ways to play. That’s what makes an excellent roguelike, loads of options and room for flexibility. I want the game to be different every time and RAD really is. Of course, I have my favorite mutations and items, but I’ve been able to make most things work as I got better at the game and my skills improve.

Skills To Pay The Bills

The combat system is also unique and entertaining. Depending on your mutations you have to change your gameplay style to match them. It really brings the players skill to the forefront and challenges the player to think fast and change playstyles accordingly. The combat is a nice mix of melee strikes and twin-stick shooter and it’s incredibly moreish.

Using both your weapons and Mutations together is vital; you can become very powerful if you spend your cash wisely and if have a bit of luck with the rewards given to you. Your mutations can even level up, gaining additional properties to help you along the way.

One of the many things I love about RAD is its presentation, it has a neon 80s vibe to it that I really like. Baseball bats, backward caps, bright colors, and a synth soundtrack all add up to make something unique. It’s bright, brash and pleasing on the eye. Wherever you walk flora spawns beneath your feet and the entire experience has a bold comic book edge to the artwork.

The graphics are beautiful, as beautiful as the end of the world in a rotten wasteland can be, anyway. The edgy music, the colorful explosions, and beautiful backdrops really give the game a nice look, if this is what the end of the world looks like, count me in. I also have to mention the narrator that pops in fairly often. I thought he would annoy me eventually but I ended up liking him a lot. He has some cracking dialogue that made me chuckle.

RAD is difficult, but you can use various tools to help you and alleviate some difficulty. You have a wealth of options to make your journey through the radiated wasteland easier as you play more. You can make yourself more powerful, start a run with an additional mutation or even start with the backpack artifact. This means when you die, you bank half your cash for future runs. You also have a notebook which will fully explain all your current mutations, items and artifacts and help you understand your current character and build properties. RAD definitely does a good job to help players settle in and get used to its systems and the roguelike style of gameplay.

I had a few minor technical issues during my many trips into the nuclear wasteland. The game crashed once, which seemed to be an isolated incident. I also got a bit of slowdown in some later areas; It was rare and was never game-breaking but it was noticeable. Neither of these small issues affected my enjoyment of the game though and hopefully, these can be ironed out with a patch in the near future.

RAD, simply put, is an excellent game. The roguelike elements stand out, especially the hub you upgrade and the bank for saving cash between runs. It makes sure every time you die; you feel you have progressed, even if it’s just a little bit. Its music, graphics, and the presentation as a whole are superb.

The synth music and neon artwork scream 1980s and all the old tech makes an old man like me thrilled. Its environments are varied, as are its enemies and it will take you a while to see everything on offer. I’ll be playing RAD for a long time to come and it could possibly take its place as my current go-to roguelike.

Beautiful, bold and a lot of fun. RAD is a great game and a great roguelike. There is a lot of variety and every run is truly unique. There are some good persistent upgrade features that make every run feel like you're edging towards eventual victory. You could play this game for a very long time until you see everything and I really want to see everything. If you like roguelikes or a great deal of variation in your gameplay, you'll not be disappointed spending your cash on this quirky title.