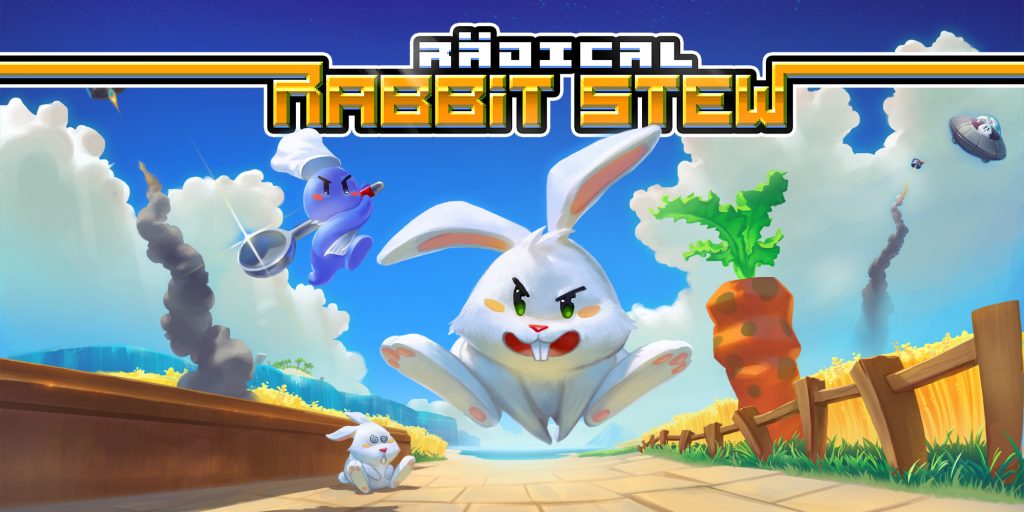 Radical Rabbit Stew PS4 Review – Have you ever wanted to belt rabbits into boiling pots of culinary joy with oversized spoons? Well, today is your lucky day, you can now live out your wildest rabbit smashing fantasies. Developed by Pugstorm AB and published by Sold-Out Software, Radical Rabbit Stew is a furry comical joy. It takes a few classic ideas and sprinkles them into a mix of modern mechanics, drizzles it in classic pixel-art and wraps it in a tale of uncanny abstract madness. The question is, does this game end up being a culinary masterpiece or does it leave a bad taste on your tongue?

I Am Sure There Are Easier Ways To Cook Rabbits

Radical Rabbit Stew tells the strange tale of a cleaner boy who must rise above his station and rescue the rabbits he once served. The Rabbit Queen, who has got tired of eating boring vegetables has stolen all the rabbits and left you in a right pickle. It’s time to don your massive shiny rabbit-whacking utensil and rescue all your furry yet tasty colleagues. Makes me hungry just thinking about it all, to be quite honest.

At its core, Radical Rabbit Stew is a physical puzzle game. Each stage comprises of cooking pots and rabbits that need to be funnelled into them, I say funnelled, what I really mean is smacked into them like a game of space rabbit rounders. It’s a simple enough premise that makes up the whole title but over the course of its couple of hour campaign, builds on this singular premise in a few different ways.

Each of these new techniques that build on the original game mechanic gets taught to you in a very light and very unobtrusive way. I love tutorials like these in games, simple background clues show you the way and the levels are designed to teach you new mechanics effortlessly. It is so smooth and effortless, you hardly even notice it is there. No blocks of text to read, no convoluted tutorial, just simple and direct.

The fact that the game restarts and loads very quickly is paramount. Some levels take a few deaths here and there to work out what you are doing. A longer loading game may have become irksome, here though you are thrown back into the rabbit bashing action in no time and death is nothing more than a mere learning experience. Trial and error play a big part in some of Radical Rabbit Stew’s levels and there were many occasions where I loudly went “Ahh that’s what you do!”.

While you are bashing small furry animals into steel pots of doom you are treated to a steady stream of upgrades, whether it is more hearts so you can take a few more hits or new tools to inflict inevitable rabbit doom. Every now and again you are treated to an oversized treasure chest with goodies to take on your adventure. As I stated earlier, none of these new tools are explained, the levels are just designed in a way that makes the tutorials for each new item invisible and offhand.

Scattered throughout the many short but well-designed levels are various oversized animal bosses. These were the highlight of the game for me. You had to use the new techniques you had learned and vanquish them with zero remorse. The oversized bosses were well thought out, well designed and I looked forward to each encounter.

There are a few other modes to get stuck into if that takes your fancy. There is a four-player local co-op game mode as well as a stage editor. The stage editor is easy to use and has you creating your own stages in minutes. Both modes are a nice distraction to the main campaign and do offer something a little different. It was fun smashing rabbits in multiplayer with the family, even if it did cause a little friction. Good old local multiplayer fun.

Graphically, Radical Rabbit Stew is made up of stylised pixel-art, I know, yawn, how many pixel-art games have been released recently? Lots. I am a fan of the style but I know some are not. It is up to you if you like how it looks but the pixel art is done very well. From the animations of the rabbits shaking their asses after killing you to the animations of the cooking pots taking off when full. It all looks quaint, pleasing and you can tell care has been taken to make it look this way.

On a musical note, the soundtrack to this title perfectly fits the style and subject matter of the game. It’s quirky, lighthearted and matches the rest of the titles game presentation to a ‘T’. Performance-wise, I had zero issues with Radical Rabbit Stew, the game is simple and not hardware intensive so problems were not expected. Still, even light-hearted games need testing for bugs and this title, as far as I know, has none.

While I cannot see Radical Rabbit Stew appearing on many peoples GOTY lists, it is light, fast and entertaining for its entire but brief run-time. I would have perhaps liked a bit more variety in level design but what it lacks in that department it makes up for with its great oversized manic boss battles. It’s bold, comical and very tongue in cheek. I can honestly say you will not play another game like Radical Rabbit Stew this year. If you like puzzle games, quick bite-sized titles or just want some breezy fun that’s not too heavy then this title may be for you.

Radical Rabbit Stew is out now for the PS4.

Bright and light-hearted, Radical Rabbit Stew may not push the boundaries of game design but it is funny, heart-warming and never overstays its welcome. It looks great, sounds great and runs amazingly well. The amazingly oversized bosses are a joy to take on and due to the trial and error nature of the game, the quick restarts are critical. The game may as well be called Rabbit Baseball Simulator 2020 as you whack a multitude of the furry buggers into big cooking pots but if you need a quick puzzle game in your life, this could be the one.