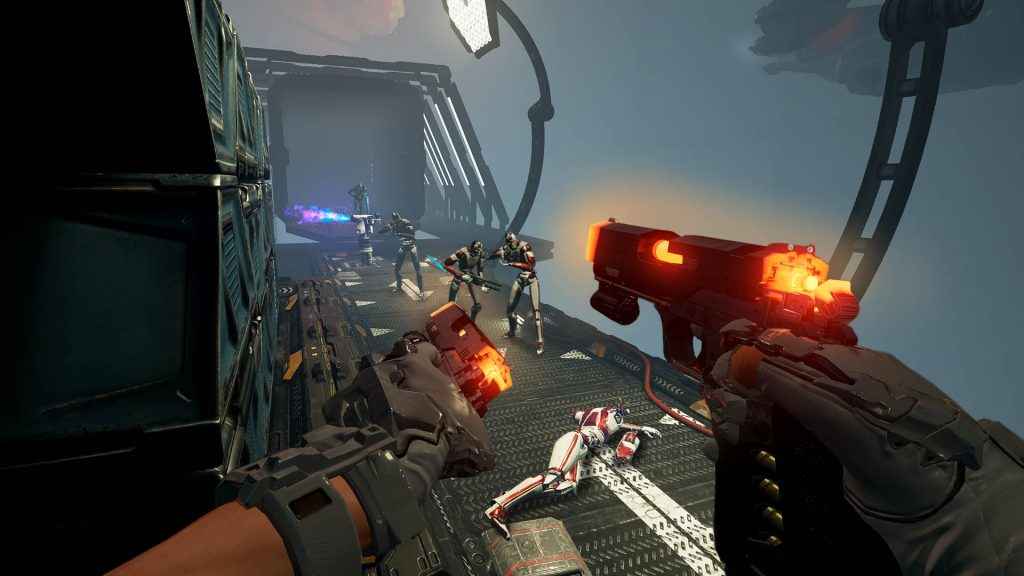 When it comes to fashioning intuitive shooting mechanics in a VR environment, it’s not unfair to say that to get it right is a tall order indeed; especially where motion controls are concerned. Yet, that’s precisely what Californian code shop Survios have managed to do with Raw Data; an effort that the developer should be commended for even if the overall package is mildly blighted by shortcomings elsewhere in its offering.

An example of good shooter gameplay on PSVR

As an operative belonging to an elite hacker movement in the distinctly cyberpunk Neo-Shinjuku, you are tasked with extracting, wait for it, Raw Data from the nefarious sounding Eden Corp and exposing the conglomerate for the endlessly evil bunch of suited fiends that they are. Despite the broad similarity in setting to Universal’s cracking Mr. Robot TV series however, it’s fair to say that thankfully Raw Data plays much more like a take on The Matrix than the slower, more psychologically sophisticated beats of Sam Esmail’s popular television show.

With levels that are set across a wide range of military complexes and high-rise technological habitats, Raw Data has players pick from a selection of characters that each possess their own weapons and powers, with a view to hacking the data core of each area all the while fending off the legions of murderous robots that spawn in order to prevent the hack from being successful. As such, Raw Data’s levels play out like an arena-based FPS, where enemies spawn from all sides and must be taken down before they can irreparably damage the data core that you are attempting to hack; though you can recover from death (respawns are only a couple of seconds away), the ultimate fail state is the destruction of the data core and so Raw Data feels much more frenetic as a result.

Likewise, controlling your character feels decent too, as players will recognise the familiar choice of teleportation and smooth control schemes seen in other PSVR titles that can be used to accommodate their own unique style of play. It is worth noting though, that Raw Data has special provisions for players who embrace the ‘smooth’ control scheme, since not only can players strafe using these controls, but enemies also lunge toward you and becomes more aggressive in turn.

Playable with the PlayStation Move motion controllers, the implementation of weapon use feels akin to the decent solution that fellow PSVR blaster Arizona Sunshine came up with. Take the pistol for example; one of the four main weapons that you’ll get a chance to use during the game, shooting is achieved by simply pulling the trigger on one of the motion controllers, and as such the feeling of satisfaction that you get from pulling off a headshot is quite substantial. Likewise, reloading the firearm can be achieved by reaching down onto your hip, scooping up a clip and then loading the magazine into the base of the pistol; so far, so common sense.

If handling firearms like the pistol and the shotgun (the reload motion and animation for this weapon in particular is especially good) proves to be satisfying than so too does control of the bow. Certainly, the feeling that you’re actually using a bow is palpable, as you must hold the middle-front of the bow with one hand and draw your shaft (in this case an endlessly replenishing plasma arrow), with your other, aim and then release; it simply feels spot on.

Less spot on however, is how the sword is handled. Though there is invariably a kick in being able to swing a laser sword around, (the craving for a first-person lightsabre title is enduring, seemingly), using the blade to cut down your foes feels limp; the distinct lack of heft and missing sensation of physical matter clashing together means that leveraging the sword in combat feels far less fulfilling that it otherwise should be. The other problem with the sword, and indeed any kind of melee combat in Raw Data, is that in the later stages, you have enemies that explode when they die, meaning that simply carving them up and not being able to escape their blast invariably results in either death or severe injury to your character, which in turn makes choosing to be a melee specialist a sadly less than desirable occupation.

Additionally, though the setting and the challenge encompassed by the various stages in Raw Data both prove to be compelling hooks to keep you playing, there are a couple of flaws that serve to tarnish the overall offering. Originally designed for PC platforms, it’s clear that owing to the modest specification of Sony’s PSVR and PS4 hardware that visual fidelity has taken a sizeable hit in the leap from the Oculus and Vive VR headsets. With jaggies everywhere and low levels of texture detail throughout, Raw Data ostensibly is not one of PSVR’s more visually impressive offerings to say the least.

Another issue is that there is simply isn’t enough variety in the enemies that you’ll tangle with in Raw Data. From the standard melee-only droids, to the gun-toting varieties, stealth assassins, airborne attack drones and big hulking mortar robots, Raw Data rarely changes things up and instead simply recycles the same enemy types over and over again.

At its core, Raw Data gets a lot right. The shooting and movement mechanics are some of the most refined you can get on PSVR right now, and the sci-fi setting is both atmospheric and enjoyable to immerse yourself in.

Sadly, though the less than polished visuals, low enemy variety and occasional motion control hiccups detract from the package somewhat, the fact remains that Raw Data gives a commendable account of itself as a shooter that fans should enjoy nonetheless.

In spite of a lack of different enemies and occasionally unreliable motion controls, Raw Data nonetheless stands as one of the more intuitive and satisfying shooters available on PSVR.