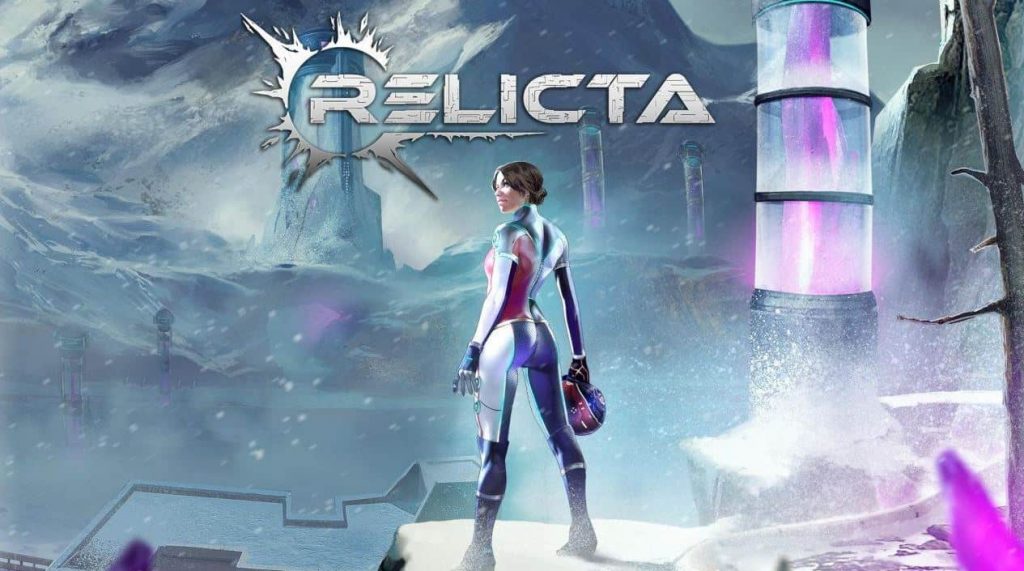 Relicta PS4 Review – Every year I look forward to finding the first-person puzzle game I fall in love with and absolutely adore. In 2019 it was The Sojourn, which I felt was an almost perfect game, and in 2020 I had my eyes set on Relicta from Mighty Polygon.

At first glance, Relicta has everything it needs to be just as good and memorable as the best puzzlers on the market, but as you dive deeper into the unique blend of narrative and puzzle gameplay you find a game that is far too complex than it needs to be and, as a result of that complexity, far too long for its own good.

Something Isn’t Quite Right On The Moon

As Dr. Patel, you are the best physicist on Earth and currently based on the Chandra Base on the Moon, where you and your team have discovered the Relicta; a glowy purple rock that you have begun to extract and mine.

After a while, you discover that the Relicta isn’t as innocent as it may seem as you are grabbed by tendrils of purple rocks and pulled inside the gaping object. Next, you wake up back in your bedroom like nothing ever happened. However, the base’s A.I. has begun spasming and glitching out, issuing threats and messing with Dr. Patel. As Patel, it is your job to discover just what the Relicta is and why the base’s system A.I. is malfunctioning.

This is done by taking Maglevs to different sections of Chandra Base and completing the puzzle-filled test tracks in each area. Each section of the base has a different environment and atmosphere which keeps the game fresh, especially as you will hop between them and return later to complete more complex puzzles. Shoemaker is full of icy caves and glaciers, while Sverdrup is a tropical paradise, and Faustini is a deserted canyon.

These areas are incredibly detailed and gorgeous to look at. There is a surprising amount of fidelity in the environments, with the interior part of Chandra Base (the hub area) looking especially pretty. Mighty Polygon has really done an incredible job with the models and levels in Relicta and it is definitely the aspect of the game that stood out the most when playing.

Test Tracks To Test The Mind

Those test tracks I mentioned form the core gameplay of Relicta. This is where you solve magnetic-based puzzles, moving boxes and putting them on pressure plates to open gates.

In Relicta, Patel is granted a pair of magnetic gloves that allow her to imbue one of the game’s movable boxes with either a negative or positive magnetism. As expected, boxes with opposite magnetism will attract, while those of the same magnetism will repel each other. Boxes can also be given anti-gravity, causing them to float when repelled. You are then tasked with imbuing magnetism on various plates and boxes on the wall and floor and bouncing boxes around, through, and over gates to move them from one section of the level to another and allow you to open the yellow gate at the end and progress to the next puzzle.

These puzzles are satisfying to solve, complex, and a delight to figure out in realtime. Pressing different switches and mapping out the area in your mind to see how the physics will repel a block from one side of the level to the other and allow you to catch it and move it to the pressure plate, opening the yellow gate.

Relicta isn’t an easy game and the puzzles are meant to make you think and for the first half of the title I loved solving each and every one of these challenges. They never felt too hard, but they offered enough of a challenge to make me think and picture what effects the magnetism will have and when. Sadly, Relicta doesn’t always stay enjoyable and that is where it suffers and falls short of other first-person physics puzzlers.

A Careful Balance That Isn’t Met

Relicta is a game all about balance. Its goal is clearly to balance challenge and complexity with enjoyment and the fun you can have when solving a challenging puzzle. Even in a recent tweet from PlayStation, Relicta is described as a game “which balances narrative and gameplay”. And the game does offer a nice balance, with you alternating between half a dozen puzzles on the various test tracks and engaging with the various characters on Chandra Base and exploring the interior corridors for collectibles and PDA’s as the story unfolds once you return from the test track.

However, that alternating structure, and the fact that at about halfway through the puzzles become incredibly complex and they get longer and longer, means that Relicta feels like a slog to get through.

You can spend up to an hour on a test track, only to come back and have 20 minutes of story and exposition, before jumping back into a test track for another hour. This cycle repeats at least six or seven times and it makes what should be a nice concise puzzle game feel like a Stephen King novel. This issue is exacerbated by the incredible challenge the puzzles pose once you get 50% of the way through Relicta.

Upon reaching this point it was easy for me to spend at least 30 minutes on a puzzle, which was one out of half a dozen on the test track I was one. I turned Relicta off multiple times because I was stuck, bored, and completely uninterested in finishing a puzzle due to how imposing the challenge was. I would eventually come back and solve it, but that cycle is not fun and I stopped enjoying Relicta once the puzzles became devastatingly difficult, damaging the experience as a whole.

A Solid Puzzler That Doesn’t Quite Know Its Limits

Relicta is a good game. The quality of the environments and the excellent voice acting and world-building here is some of the best I have seen from an indie game this year, let alone a puzzle game. Half of the game is a challenging but satisfying ride pulling and pushing boxes apart and using magnetism to solve some wonderfully crafted puzzles.

Unfortunately, at about halfway through, the alternating ‘story-puzzle’ cycle becomes tiring and the complexity of the puzzles damage the experience, making the game increasingly unenjoyable and tough to stick with. Relicta is worth your time, but you might want to wait for a guide to come out so that the game doesn’t damage itself and the experience it offers you.

Relicta is available now on PS4.

Relicta tries to strike a balance between narrative and gameplay, but that balance ends up hurting the final experience by making the game a slog to go through and puzzles becoming infuriatingly complex in the second half. The story and excellent voice acting are a nice differentiator and the level of detail in the environments is impressive, but Relicta is a game that is hard to stick with in its second half if you don't have a guide.