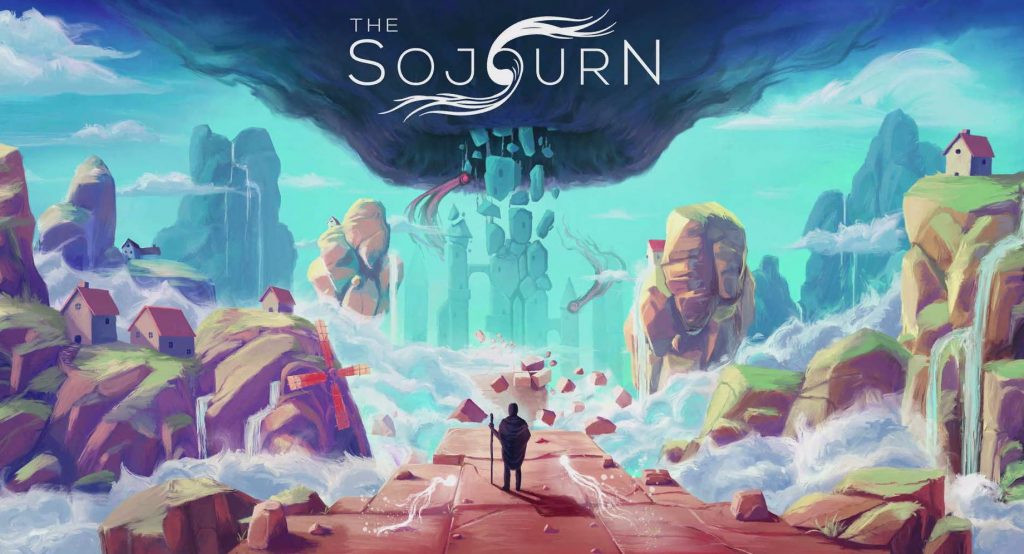 Puzzle games are a dime a dozen these days, so finding a puzzle game that stands out from the crowded pack and is challenging and satisfying to boot can be a tricky endeavour.

Luckily, Shifting Tides and Iceberg Interactive have graced us with The Sojourn, a phenomenal puzzle game that challenges you to think harder through its expertly designed puzzles and think in new and profound ways thanks to its philosophical narrative.

The Sojourn is a ten-hour journey through a beautiful, ever-shifting world filled with gorgeous architecture and scenery. During that ten-hour journey, you come across a variety of locations, from a glistening tower which houses a library inside to a dark and mysterious underground cave. Each location acts as a chapter of the game, which ensures that new color palettes and scenery are dished out at a welcome pace, keeping the game fresh and mystifying.

In each location, there are anywhere from ten to twenty portals you can enter, which is where you find the game’s expertly designed puzzles. Once inside, you are greeted with what is best described as a mixture of Chess and The Talos Principle.

The core mechanic of The Sojourn is that you are able to shift from the regular world to a Dark Realm for a number of steps by walking into a pool of light. In that Dark Realm, new paths become visible and you are then able to switch places with statues located around the level. The level structure doesn’t change beyond a platform here and there. But, your ability to interact with objects does. The statue allows you to teleport between two locations and create shortcuts to paths only accessible in the Dark Realm.

That is the core of every single puzzle in the game (of which there are more than 70) and it stays present until the very end. However, Shifting Tides expertly add to that core concept by introducing new mechanics that complement those already established, rather than ignore them completely. For example, after the introductory section of the game, Light Beams are introduced that emit the Dark Realm and can be turned in eight directions (North, North-East, South-East, South, etc).

These allow you to stay within the dark zone for longer as you can step into a pool of light, then into a beam, turn the beam, and continue along the path in the beam of light. These beams can then power each other by facing them in the direction of another, creating a chain effect and allowing for more complex levels.

That complexity is expanded upon even further into the game with statues and Light Beams possessing a gem that can be moved from one to the other, powering them and allowing you to use them even when in the regular world. Other mechanics are introduced even further in, all being utilised in the game’s final area and creating incredibly complex levels. Some chapters of the game felt a teensy bit too long; but, by the time I felt that way, I was onto the next chapter and a new area in a puzzle or two.

The puzzles in The Sojourn have a lot of moving parts. They are like mechanisms with multiple parts working together in different ways to contribute towards an end goal, which in this case is reaching the exit portal out of the level.

But, the key thing is that they are all expertly designed. The Sojourn has some of the smartest level design in any game I have played, let alone a puzzle game. Each one feels satisfying to solve, with genuine epiphany moments where all of its moving parts click into place and you can see the steps you need to take to exit.

Some of them are challenging and hard, making me questioning every possible solution for upwards of thirty minutes, especially during the final chapter of the game, but it never felt like the solution was miles out of reach or impossible to find. I cannot overstate just how satisfying and expertly designed every single puzzle feels in the game and how Shifting Tides masterfully increases the complexity with no obvious difficulty spikes. Instead, the whole experience, across its dozens of puzzles, feels like a gentle incline.

In The Sojourn, you arrive in a mysterious land only guided by light orbs. These orbs take you through each gorgeous location and help guide you. Along the way, interspersed between puzzles, the light orbs will reveal statues of people, chronicling what happened in this strange land before you arrived.

And, these statues chronicle the journey of the individuals that lived here previously, ultimately culminating in a story about overthrowing tyrannical rule and working together.

All of this is done without a single word being spoken and it is handled in an impactful and cerebral way through the fantastic soundtrack that is with you from start to finish. A soundtrack which adds to the mysterious and enigmatic world through delightful piano melodies and a sense of enchantment that meshes well with the light and airy colours of The Sojourn’s art style.

On top of the base puzzles, around two-thirds of them have an optional extra objective you can complete once you open the exit portal. This objective asks you to utilise the systems and mechanics you just used and pick up a scroll found in a new section of the level.

For example, you will often have to backtrack through a level and readjust Light Beams and statues so that you can make it to the scroll. This is where the difficulty can step up fairly significantly, with you sometimes having to think about multiple possibilities and options that could help you reach the scroll.

But, as with the main levels, although they were challenging, they never felt impossible or unfair, and solving these were some of the most rewarding parts of The Sojourn. And, even if you do get stuck, you can return to any of them from the final area of the game, even after the credits roll.

The scrolls that you pick up offer a philosophical statement that encourages you to think about your life and outlook on the world and be a better person not only for yourself but for others as well.

Those scrolls add to the narrative of the game and help to provide the reasoning behind the actions the people depicted in the statues take. However, they are just as valuable to your own self-reflection, which led to me finishing the Sojourn feeling like I had come out of an experience like no other. An experience that taught me how to be a better and more reflective person.

The Sojourn Is A Must-Play Puzzler

I absolutely adored my time with this game and it is definitively one of the best puzzle games on the market and my new favourite puzzle game.

The Sojourn is a unified experience where each part of the game contributes to the whole, creating a philosophical and mesmerising journey that challenges your thinking through its expertly designed puzzles and culminates into an uplifting message and a tale of self-reflection. I will be thinking about my journey through the beautiful and mystifying world of The Sojourn for a long time.

Shifting Tides have created one of the best games of the year and an absolute must-play puzzler for anyone who is even slightly interested in the genre.

The Sojourn is one of the best games of the year and one of the best puzzle games available, if not the best. Every single puzzle is meticulously designed and challenges you in satisfying ways, without ever feeling impossible. Carefully crafted, beautiful levels. An uplifting, philosophical story that asks you to reflect upon your actions and the world around you. All of these ingredients create an experience like no other and a game you will be thinking about even after the credits have rolled.