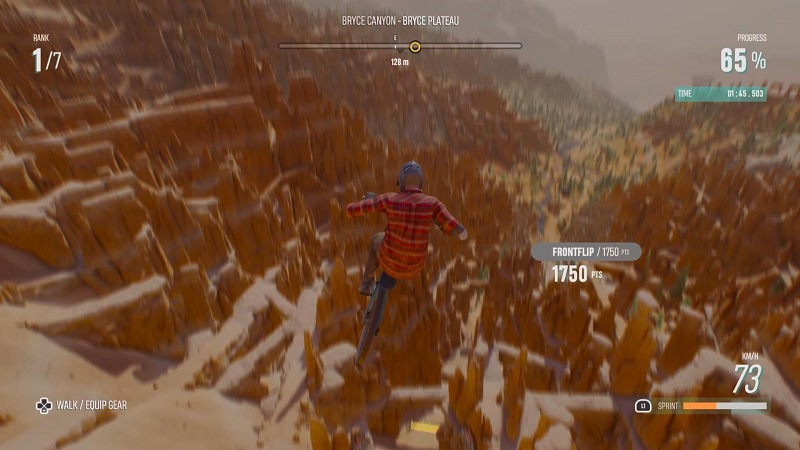 Riders Republic Review (PS5) – As an interactive medium, there are video game concepts that can not only work extremely well, but are also almost inherently obvious to anyone as a good idea for a game.

Sports games fall under this category, since they’re already based on other kinds of activities, and through a video game, anyone can have a small taste of what the experience could be like while celebrating the sport itself.

That’s the ‘literal’ jumping off point for Riders Republic. A game aimed at giving you a small taste of what the sports featured may be like while celebrating not only them but the natural environment that makes them possible, with the added benefit and twist however of video-gaming it up.

Ride Till You Drop 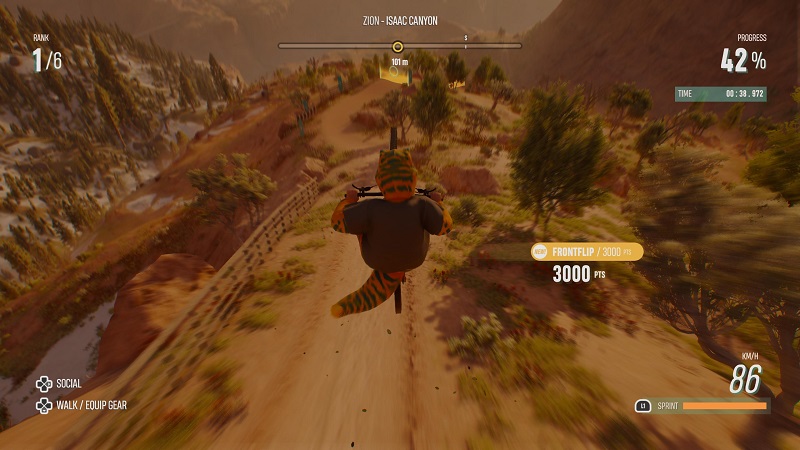 With that said, Riders Republic isn’t as simple of a game that I might make it sound. There’s plenty of depth added with the video-gaming of it all, because it really opens up how much fun this giant sandbox can be.

The physics are what matter most in a game like this, on top of how each activity feels, from bike riding, to skiing, to snowboarding, to snowmobiling, air gliding, or just finding anything with wheels on it to go down a mountain on. It definitely doesn’t feel exactly like it would in real life, but the essential elements are captured.

You still feel some of the adrenaline that comes with speeding down the side of a snowy mountain on a sunny day, accompanied by the excitement of going off a big jump, pulling off a cool trick and landing safely. All of course, without the actual danger of breaking your neck.

While there have been other games that have captured those feelings to varying degrees of success, Riders Republic is the first of its kind to capture that feeling across more sports than any other to a very successful degree.

Even the more extravagant distractions – like an actual jetpack you get to use – feel fun and intense to navigate with in tight corners. It’s all a giant sandbox for you to play in however you like, and quite frankly, is more polished than some games that only try to create those feeling with one sport, let alone several.

Life Moves Pretty Fast, If You Don’t Stop And Look Around Every Once In A While, You Might Miss It 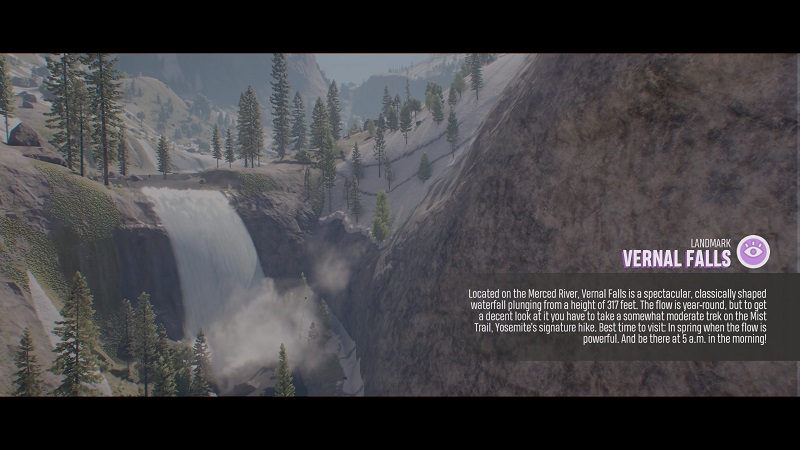 Forgive me for quoting that entire line from Ferris Bueller’s Day Off, but it feels very appropriate when talking about the presentation of Riders Republic. This game is nothing short of breathtaking in its best moments, and it is imperative that you take the time to look at it.

The game even insists that you do so by placing different landmark points all across the map for you to visit, and learn a little something about where in the world Ubisoft pulled from.

It’s a great little touch to a kind of game where that isn’t always considered, and it feels good to calm down for at least a moment every now and then from all the commotion.

Even in the few spare moments you have to look beyond the road in front of you and around you during intense races showcase just how beautiful the environments you’re riding in are.

Time To Get Tricky 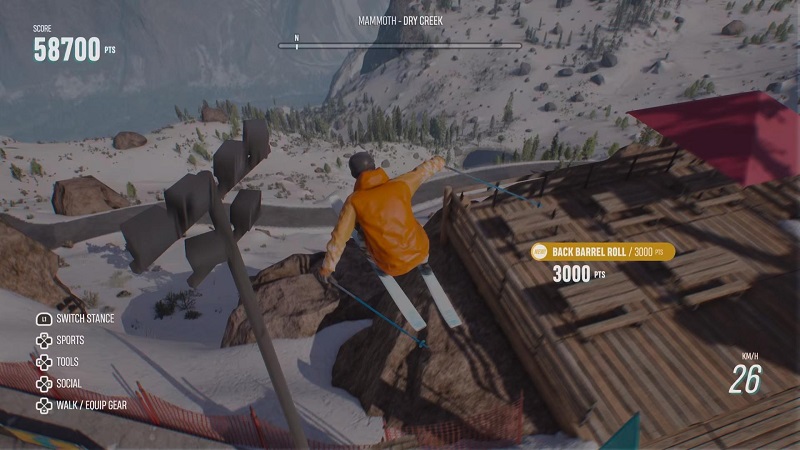 Remember that depth I mentioned earlier, added by the arcade-style gamification? That is definitely important when talking about even just the thrill of riding a bike down a twisting track on the side of a mountain, but it is far more important when you’re also doing tricks down that mountain.

Getting creative with how many ways you can take a jump, do a flip, grab your board in the air, spin around, you name it – you can almost definitely do it in Riders Republic.

That’s where the best part of the game’s meta is in my opinion. You’re really allowed to be practically as creative as you want, and the Zen Mode is a great way to just try out whatever it is you’re looking for.

The other side to the meta, which I also enjoy, though not to the same degree, is the same meta that you find in other racing games. Trying to get every star on each track and beat all the side challenges along with the main challenge of just winning the race.

Like I said, it’s something I do enjoy, though it’s also an element in every other racing game, so it’s more akin to scratching an itch than the fun you feel making up cool tricks.

It’s Not Always A Smooth Ride 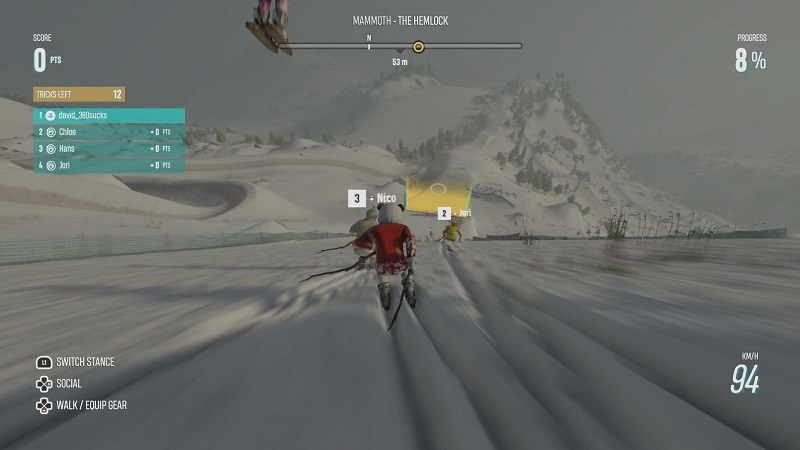 As much it would be great to say there are no issues with Riders Republic, that’s not at all the case. There are little annoyances that can dampen your experience, but thankfully they never really come close to ruining it.

The map for example is quite large, and though you don’t have the whole of it to run around in once you begin your career mode, it never fails to feel overwhelming as you can constantly see every other player on the map playing the game at all times.

It’s a neat idea to see everyone at once, but it does nothing besides make it feel crowded and more difficult to find events on the map. What makes it worse is that the UI isn’t exactly that great to navigate in the first place, so having a part of it that you’d likely visit often reduced to a messy, crowded place is less than ideal.

When I called the game “polished,” I’m talking about the physics, and how well they’re tuned for you to have some realistic limits to what you can do, while also being arcade-like. Technologically however, it is less than polished as my character would consistently glitch through something at some point, and the game crashed at least once every session I had with it.

Also, it should be noted that you can pay no attention to the cutscenes whenever they do happen. The writing starts off poor and doesn’t improve over time, so you’re better off just focusing on the fun bits.

Get Out There And Ride

Despite the issues I did have, the simple truth is that they don’t get in your way all that much. The main core of Riders Republic is that of a fun game that only wants you to have fun, and nothing more.

On a personal note, it’s great to have a game that feels like the evolution of SSX mixed in with a bunch of other sports all made to be just as fun.

Riders Republic is at its core a fun game that only wants you to have fun, more than most games. Its UI isn't the best, and there still seem to be some bugs that need to be ironed out, but there are no issues that really break your fun along the way. On top of the gorgeous presentation, Riders Republic is easy to recommend for anyone with a liking towards a game where they can flip around three times on a pair of rocket ski's mid-air while dressed as a giraffe.