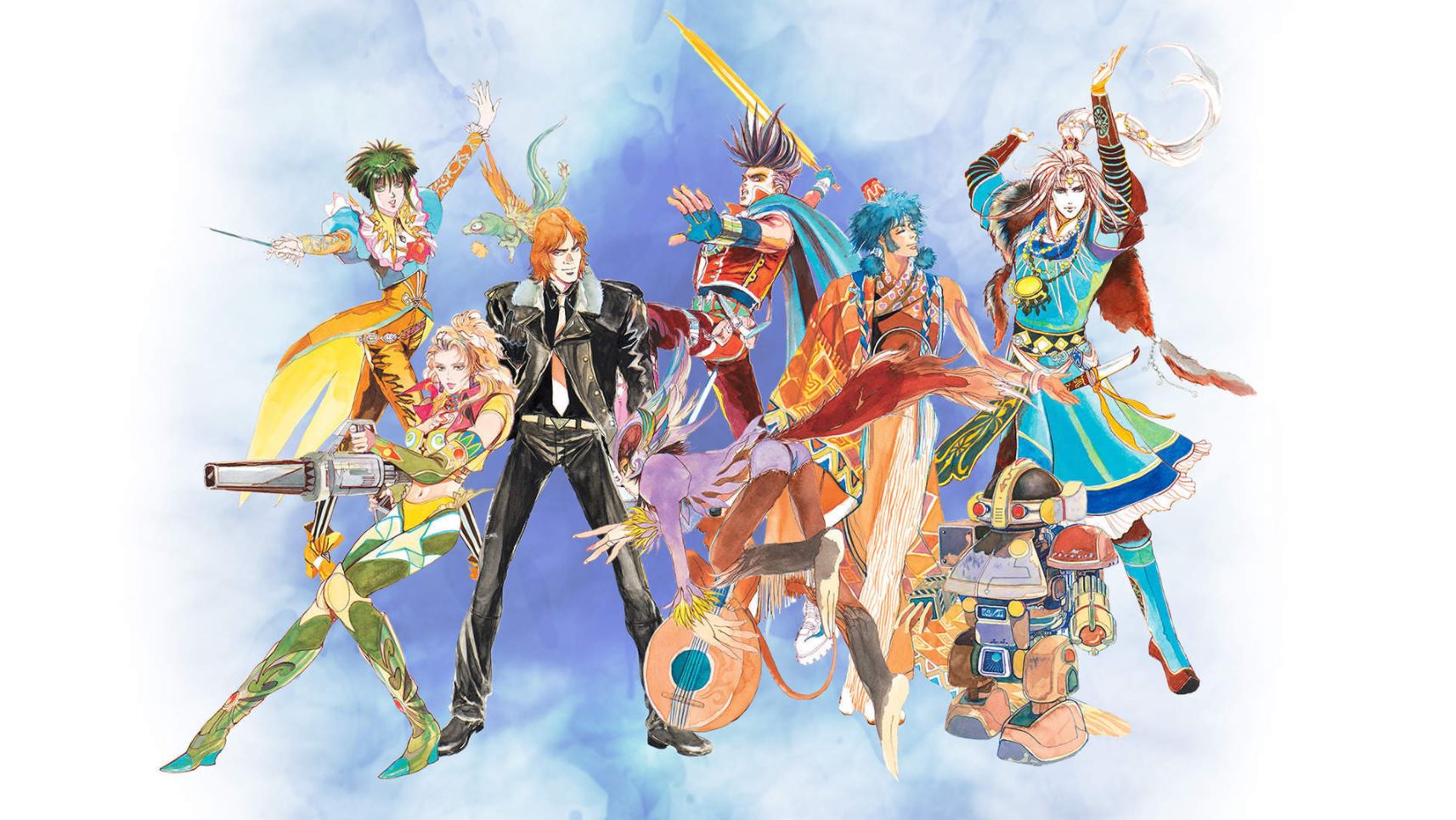 A Unique Take On Storytelling That Was Ahead Of Its Time

This remaster looks to give the franchise another shot at glory. What makes SaGa Frontier stand out is its non-linear storytelling with almost no overarching story. Instead, the game focuses on seven individual characters and tells their own personal stories inside the same world.

Much like Square’s own Octopath Traveler. SaGa Frontier allows you to select one of its seven main heroes and set off on their own journey. Some of these characters do cross paths, while others never come in contact with the other heroes. Each character’s story is an isolated situation and each one is on a quest of their own.

Each character’s story is unique. Red: is on the search for BlackX, a criminal organization that murdered his father. Blue: A Mage looking to acquire all known magic in the world has to face off against his own brother in a battle to the death to acquire it. 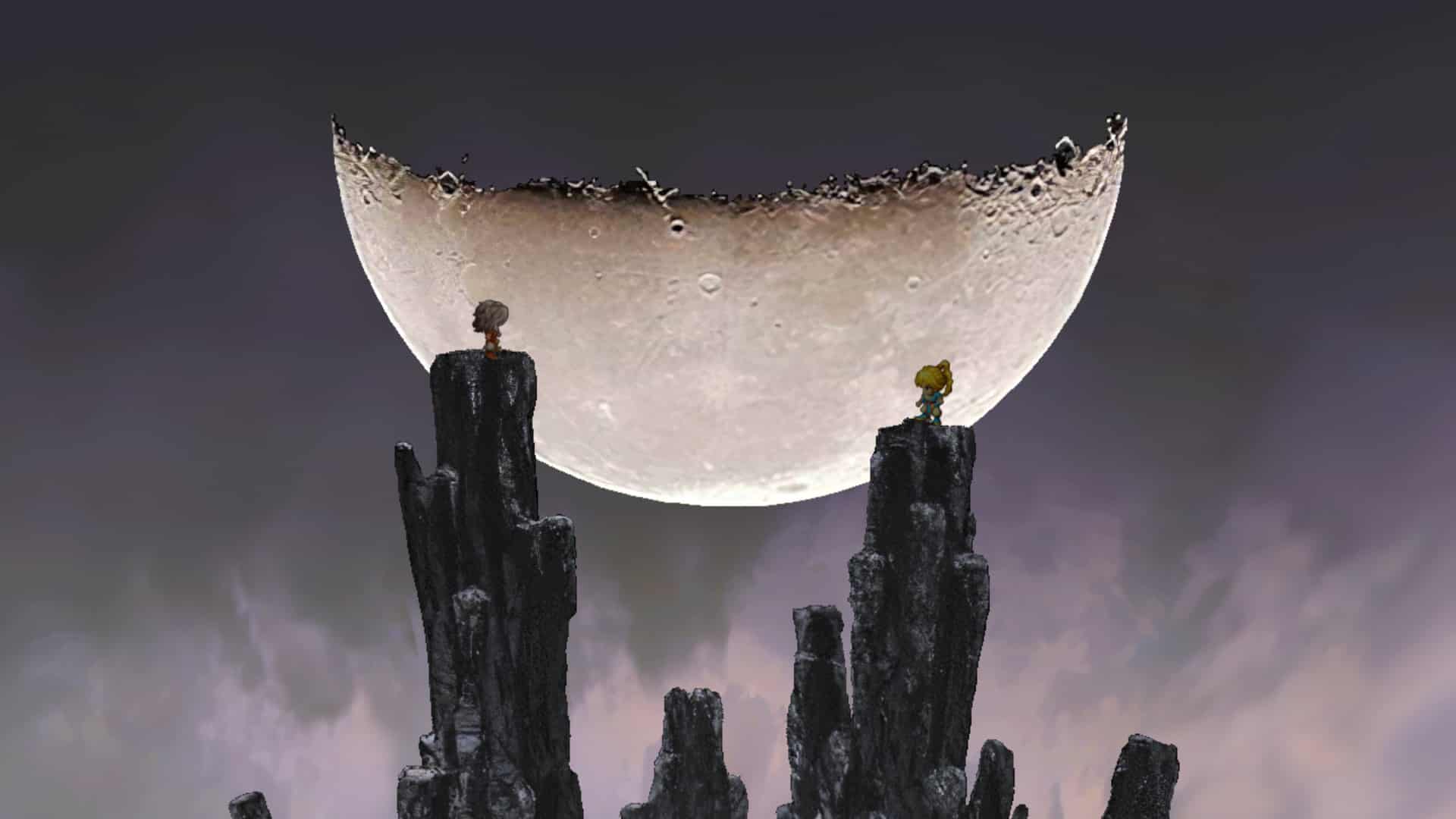 Each story offers its own experience and some of them are quite heartbreaking. It’s just a shame that the remaster didn’t bother with a better translation and maybe just a touch-up on the writing. The conversation between characters is brief. That means you don’t really get the same connection or even backstory to characters as you would with other games simply because of how quickly the story sequences are presented.

Since there are seven characters to choose from, each scenario takes about six hours to complete depending on how much time you spend grinding stats. This grinding leads to the game’s biggest problem.

In some scenarios, you’ll be able to recruit up to 15 party members. Most of these characters other heroes can recruit as well in their playthrough, which is great as you’ll run into plenty of familiar faces and you’ll already know how they play. The problem is that some of the characters are recruited late in the game, and when they are recruited, they join the party at essentially level 1 and you have to level them up, which sets you back hours.

Hours of grinding await you if you’re looking to get past a lot of the challenges heading your way. No matter how strong you get, enemies level up with you. Though you may be able to take them down with powerful attacks, they can do the same to you a lot of the time. 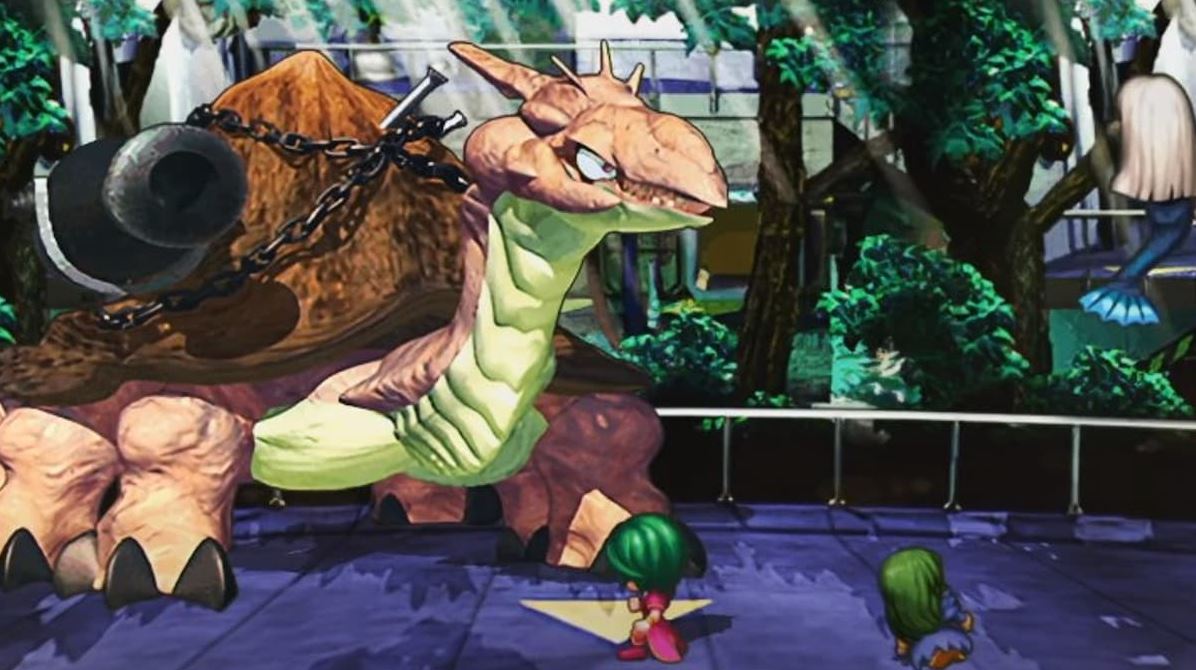 A Fun Skill System That Keeps On Giving

SaGa Frontier uses a weapon and skill system. Depending on the weapon you equip on a party member, that party member will learn skills specific to that weapon the more they use it in combat. Using a Gun will teach you specific firearm skills. While using magic, you’ll learn better and more powerful spells.

It’s a fun system that had me learning as many skills as I possibly could. I did find that sticking to one specific weapon worked best at the end just because the later skills you can learn allow you to take down a boss in just a handful of attacks.

The combat in Frontier is turn-based. It’s quite simple for a 1997 game. You enter combat and select all your team members’ attacks and watch the combat unfold. There isn’t much depth that goes into it outside of attacks dealing slashing or piercing damage, but you never really know what the enemies are actually weak against without trial and error. And even then, you have to remember their weaknesses as there isn’t any bestiary. 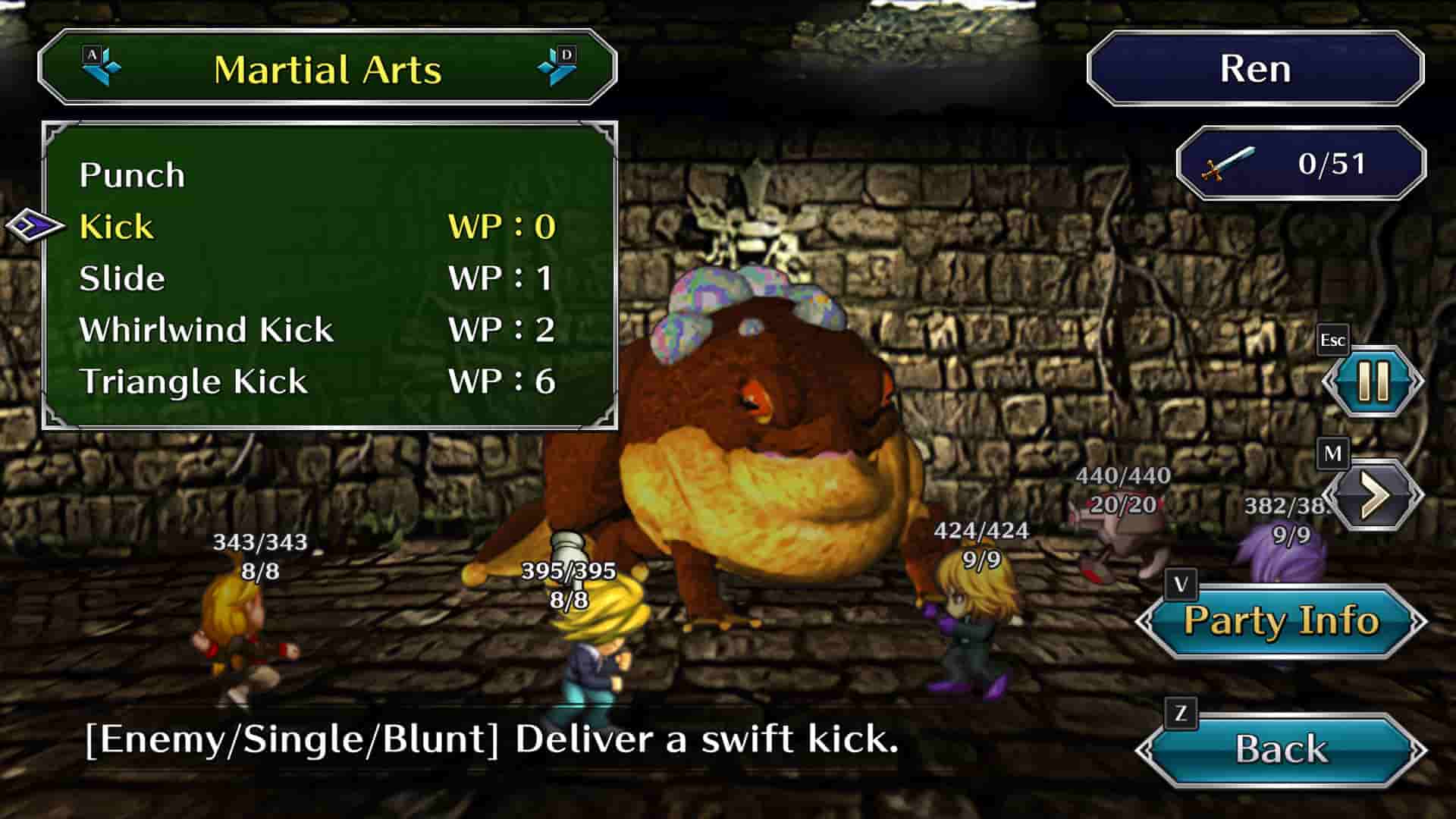 One thing I do love about the combat is the combo attacks. Sometimes during combat, characters can combo their skill attacks into one massive attack. It happens at random, which is unfortunate, but it’s quite entertaining when it happens, and sometimes a full 5 party combo attack can be so devastating it can cut a boss’s health in half.

Non-Linear Exploration May Confuse And Frustrate Some Players

Exploration can be linear and non-linear depending on your character. For some characters, right as the story begins, you are free to travel the various planets at your leisure. Some people may enjoy this, while others may be frustrated as the game doesn’t provide the best direction on where to go next. You may think you’re on the right path only to find out you’ve been thrown into a side-quest instead.

The planets themselves aren’t open worlds but feature some long and in-depth dungeons to have to go through and not every planet features a town or a place to rest forcing you to think ahead and prepare accordingly. 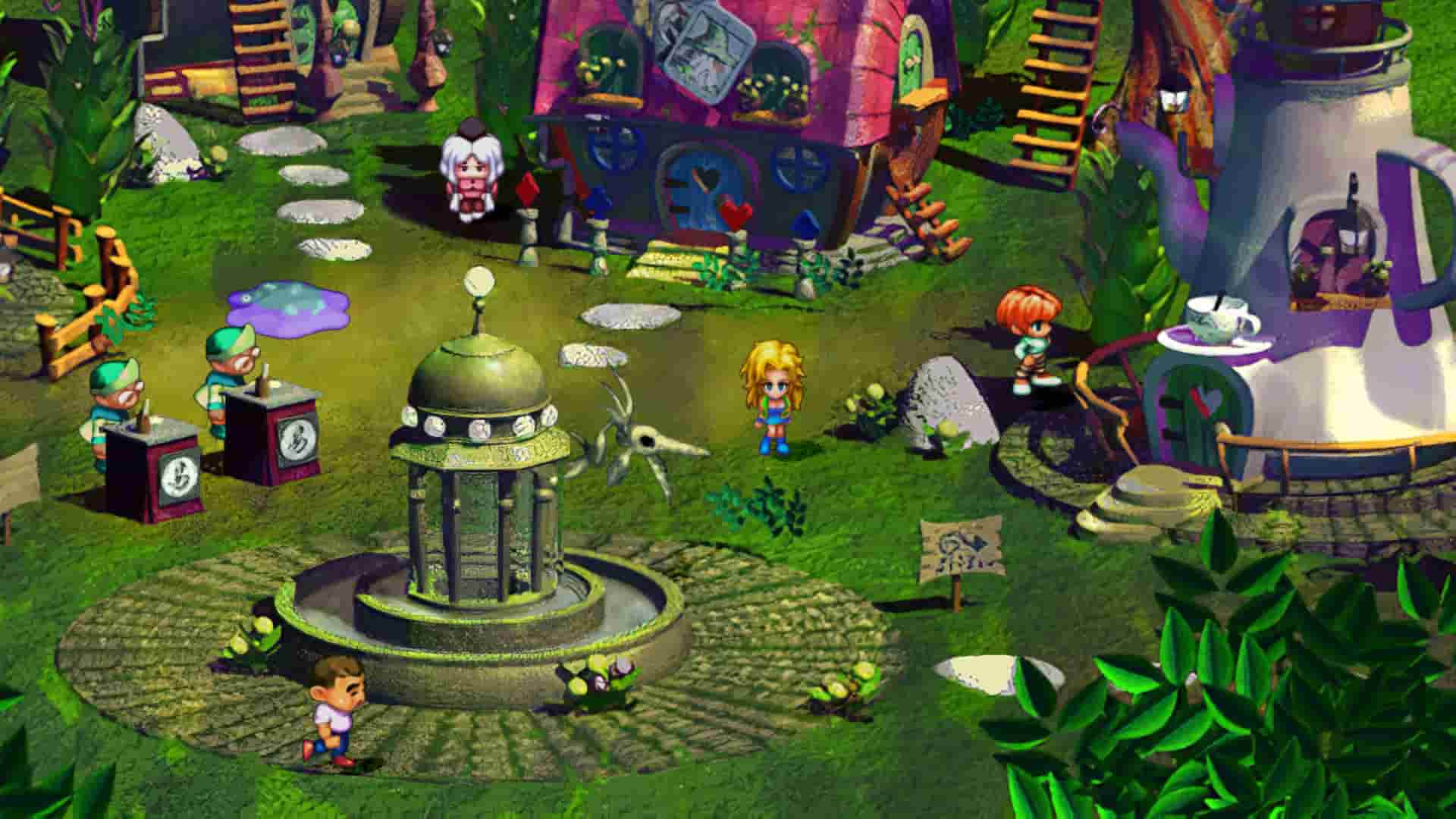 SaGa Frontier has gotten a facelift. It’s not a major one as the PS1 game still has a great retro look to it, but a better resolution, improved textures, and wide-screen support are a great addition. Other major additions include a fast-forward option for combat, allowing you to fly through long animations. An eighth cut character from the original game gets their own scenario, and new cutscenes and additional story segments have been restored, which were also cut from the original release.

A Solid Remaster For Existing Fans

SaGa Frontier wasn’t the biggest selling title for Square during the PlayStation heyday, but it became a cult classic for many gamers. It’s great to have another chance to play Frontier and even better for gamers who may not have gotten a chance to experience it the first time around. Still, I personally feel that only fans of the original game will truly enjoy this remaster.

SaGa Frontier Remastered releases for PS4 on April 15, 2021, and is playable on PS5 via backwards compatibility.

Saga Frontier Remastered is a great remaster for those who already enjoyed the original. The unique take on exploration and non-linear storytelling may throw some people off expecting a traditional RPG but those who stick with it may find the charm that so many found back in when it originally released. Simple but fun combat and a great skills system make it a joy to play and the improvements in the remaster may help bring in new fans while invigorating older fans with the inclusion of originally cut content.