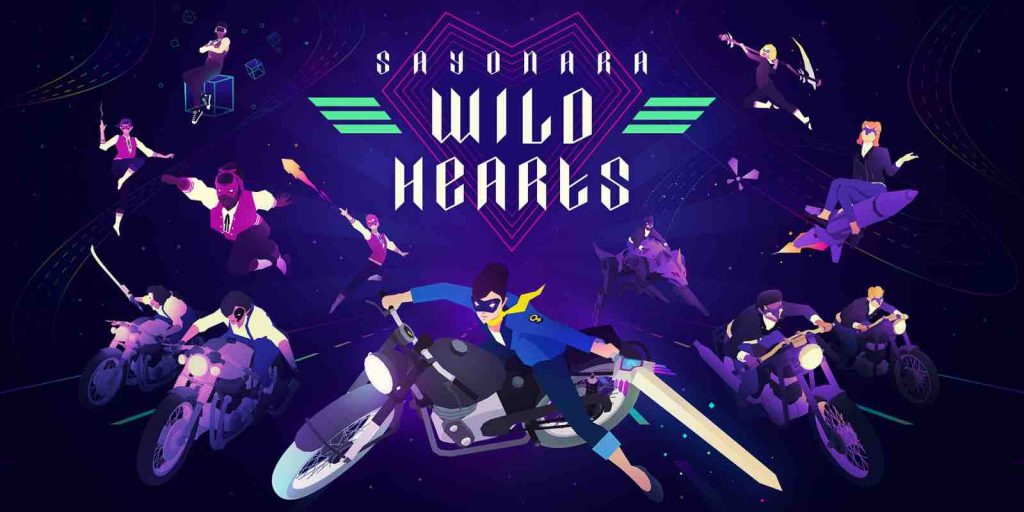 How do you make old-fashioned arcade score chasing interesting again?

One look at Sayonara Wild Hearts can, for the untrained eye, initially overwhelm the senses extremely quickly. A cursory glance reveals riding super-fast motorcycles through a neon lit city, dance battling, light sword duels, acrobatic skateboarding, wolf hunting and soaring winglessly through the air as an enemy splits the land in two, forcing you to dive and weave in-between the earthly fissures.

Indeed, at first, it is difficult to ascertain just what Sayonara Wild Hearts is from screenshots which is why it’s strongly recommended that you find out for yourself and play the latest title from Swedish developer Simogo, not least because it makes old-school score chasing compelling in a way that it hasn’t ever been. And also because it has the best soundtrack of any game to come out this year, too.

A Soulful, Essential Celebration Of Love And Precision Score Chasing

The premise of Sayonara Wild Hearts is delectably outlandish. After a woman has her heart broken, a disturbance in the balance of the universe causes a diamond butterfly to appear and lead her into a highway in the sky, still with me? Good. Here she discovers her alter ego, a masked biker called The Fool and they combine in order to journey across the cosmos and steal back the harmony of the universe from the nefarious (yet extremely sharply dressed) Little Death and her cronies Stereo Lovers, Dancing Devils, Howling Moons and Hermit 64. Yes, Hermit 64.

Before anything else, let’s cover something that we don’t (or certainly I don’t, at least) talk about very much in reviews and that’s the opening game menu. You see, the opening game menu of Sayonara Wild Hearts is such that it demands examination. A raucously chipper and upbeat synthesis of custom pop music and a thrumming, color-veined title screen, Sayonara Wild Hearts leaves you in no doubt as to the audiovisual extravagance that is to follow, that much is for sure. What it does leave you unprepared for though, is the super robust arcade score chasing bedrock that acts as the foundation to the entire affair.

Despite the overtures towards contemporary visual and audible influences, Sayonara Wild Hearts ultimately speaks to an earlier vintage with its score chasing sensibilities, evoking the sort of thing that legendary British indie dev Jeff Minter would have arguably produced had he a thing for pop music (arguably Mr. Minter has the psychedelic visual side of things nailed down).

Sayonara Wild Hearts is, for the most part, a rhythm score game. This typically means that you’ll be viewing the action from behind the protagonist and pressing left or right on the analogue stick will shift you in the left, right or middle lanes depending where you are currently are. You’ll be wanting to switch lanes frequently too, as the score chasing mechanic which is central to Sayonara Wild Hearts tasks you with collecting heart and diamond icons across every level, while all manner of pesky rocks and obstacles can force a restart if you’re not careful and decide to crash face-first into them.

The key word there is ‘typically’. Where Sayonara Wild Hearts’ genius really comes to the fore is in how it plays with perspective and scenario, as the camera seemingly dances along with the insanely bop-worthy music just as you are, energetically and effortlessly switching from an over the shoulder motorcycle chase into a side-on brawl with multiple assailants atop side vehicle, tasking the player to time button presses correctly in order to gain maximum score.

Some levels even eradicate the notion of lanes altogether, too, as a shift in perspective might grant you full movement in a 3D space for a short time, or switch to a top down view of yourself at a moment’s notice and it’s this sort of naked, rush-inducing spontaneity that really helps to make Sayonara Wild Hearts feel as thrilling as it does from start to finish.

Each level is pint-sized at around 2-5 minutes each, and while the whole game can be completed (I use that word loosely) in a single sitting, the potential for score chasing mastery is vast, especially given that most levels are played out at extreme velocity and the spinning diamonds which give the most score in one go, are often the riskiest to collect.

At Sayonara Wild Hearts breakneck pace, it can be difficult to sometimes see just how nuanced and subtle is design can be. Indeed, instances of clever, blink-and-you-will-miss-it design occurs on a regular basis; not every jump necessarily results in the best outcome as you might leap over a much larger point reward, while additional precious points are awarded for risky, last-minute evasions of oncoming obstacles. For a game that appears so outwardly obsessed with style and verve, there’s an equal amount of sophisticated arcade design lurking beneath that ultra-polished veneer too.

Going back to the question of longevity, beyond being able to play through each level to nail that perfect gold rank – a time consuming and rewarding feat in itself, the team at Simogo manage to enrapture the attention of the player with functionally mysterious Zodiac Riddles that are directly tied into the game’s trophies, and unlockable extra modes which become available once you’ve completed the game with the requisite silver and gold rankings.

In the end though, and certainly for a long time after the credits have finished their march, Sayonara Wild Hearts ends up resonating far more deeply than its 80s style, arcade trappings might suggest. It’s about recovering from emotional trauma, from heartbreak and with pop music being used as a constant, relieving salve throughout its duration. There will be times that I’ll return to Sayonara Wild Hearts as a pure score chasing effort, and there will be others where I’ll embrace it as a mood piece – encouraging its infectious energy to spread throughout my being, like a warm hug from an invisible, intangible presence.

Visually, Sayonara Wild Hearts is an indulgent banquet. Boasting the most delectable, intoxicating veneer I’ve seen in any kind of media for quite some time, with flat shaded shapes, environments and beautifully animated, feverish game worlds that all absolutely soar along at a liquid smooth framerate, playing Sayonara Wild Hearts can feel akin to being put in control of an especially extraordinary LSD trip, effectively, something very few of us could likely lay claim to, I’d imagine.

Arguably though the star of the show is the thumpingly brilliant pop soundtrack that easily stands out as the best the year has seen so far. A custom made pop effort that stands up against anything released in that music genre right now, it elicits fond similarities to artists from the likes of CHVRCHES through to Carly Rae Jepsen, so complete and thoroughly satisfying is the fusion of cheerful pop sugar and pulse-pounding electronica. In short, the soundtrack for Sayonara Wild Hearts is absolutely outstanding, and the instruments and lyrics being the language within which the game imparts itself to the player.

This is how you make old-fashioned arcade score chasing interesting again (and throw a heartfelt meditation on emotional trauma into the bargain). A boundlessly imaginative masterpiece of effervescent moods and a celebration of arcade perfect rhythm reactions, it’s just a shame that like a coincidental brush of shoulders between two strangers who, in another life, could have spent their lives together, the whole experience comes and goes relatively quickly, like an unspoken romance left lingering in the air.

A beautifully made score chaser which has that rarest of things - a soul. Sayonara Wild Hearts isn't just a game, it's an emotional band aid that feels like a warm phantom embrace. Absolutely essential stuff.