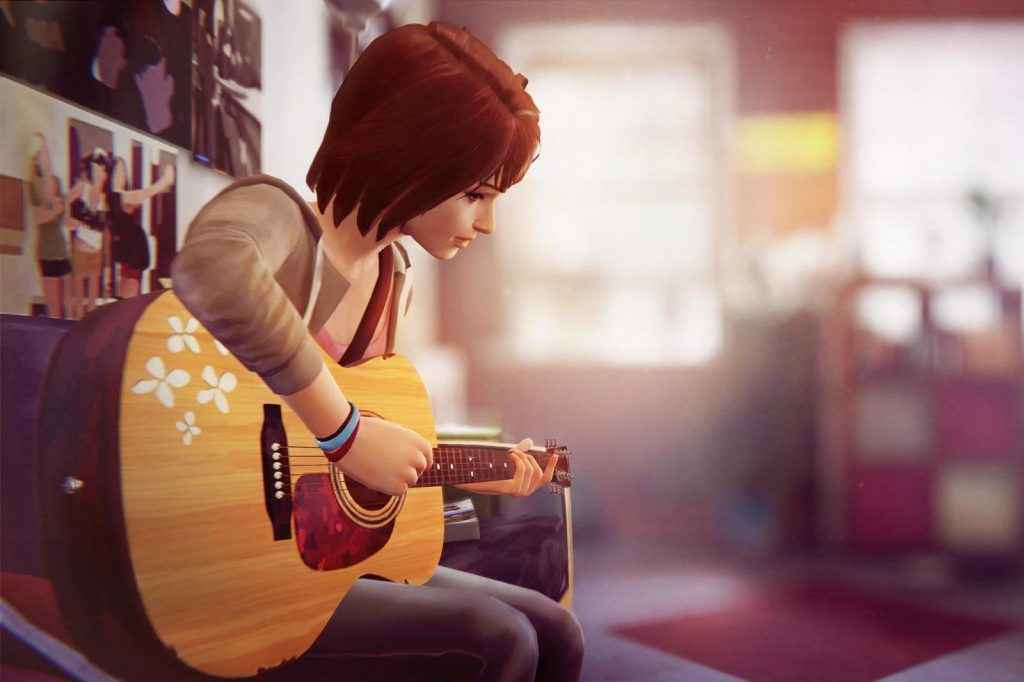 Just what makes for the best PS4 soundtracks? Music in video games can be just as effective as any mechanic, script or performance in making you invest in a game’s world, story and characters. A well-timed orchestral swell as an epic battle reaches its conclusion acts as the cherry on top. A dreamy piano performance alongside a heartbreaking moment makes you all misty-eyed, and a pulsating synthwave beat makes shooting waves of alien scum all the more exciting.

It’s not as easy as just sticking a few Hans Zimmer horns into every important scene though. A great video game soundtrack has to have something distinct to it. Something that encapsulates the onscreen action perfectly. It can be orchestral, synthy, licensed alt-rock or even good-old-fashioned 8-bit chiptune. If it fits the game well, it’s off to a winning start.

So we begin selecting the best PS4 soundtracks with five different examples of the medium, which we’ll add to over time. Of course, feel free to suggest your own favorites!

Something of a surprise entry in this feature, Terminator: Resistance does a commendable job of emulating Brad Fidel’s timeless score from 1984’s The Terminator, but where it really ramps things up is when the game hits its final act. Ably supported by the ‘Final Assault’ track, you really do feel like the last vestiges of the human resistance as you attempt your final assault on Skynet. A fast, epic beat that intertwines the series hallmark theme, the Final Assault theme is a gloriously fist-pumping, battle-anthem to say the least.

What a poor and desperately incomplete feature this would be without Sayonara Wild Hearts – and so it is that Simogo’s latest finds inclusion here. Set to the beautiful thrum of a custom soundtrack from the talented minds and fingers of artists Daniel Olsén and Jonathan Eng, the breathless, soul-chargingly upbeat pop anthems of Sayonara Wild Hearts are akin to having minty fresh rainbows poured into your ears as you ride, skateboard, duel and break hearts at 200MPH to one of the greatest soundtracks ever devised.

Dying Light’s early hours are deeply rooted in Romero’s zombie film saga with a pitch-perfect atmosphere. A huge part of that is down to the soundtrack that steals the synth-based menace of Day of the Dead and John Carpenter’s The Thing. The way it fades and shifts during certain missions and actions complement each tone it tries to portray.

Persona 5 is all about style where presentation is concerned. The visual flourishes are sumptuous, and the music? Oh, the music is nothing short of sublime!

From jazzy upbeat vocal tracks to wistful, dreamy slow numbers, Persona 5’s soundtrack has incredible variety yet also manages to keep it tied together as a cohesive as a whole. There are good soundtracks, and then there are ones with melodies that burrow into your ears and take up residence for months. Persona 5 is definitely the latter.

Few things in life bring such unbridled joy as playing Nex Machina on a 4K TV with a meaty sound system in place. It’s a transcendent experience and massively under-appreciated as soundtracks go.

Standout Tracks: Let Me Save You, Crystal Mountain

From the moment Max Caulfield puts her earbuds in before walking along the corridor of her high school and Syd Matters’ ‘To All of You’ starts up, you get a clear idea of the relationship between DONTNOD’s indie time-twisting drama and its music. This is a soundtrack filled with alt-indie music that serves as the perfect accompaniment to so many of Life is Strange‘s tender, emotional moments.

In particular, the choice of ‘Mt. Washington’ by Local Natives for the end of episode two really helps deliver the moment it’s paired with beatifully. No mean feat considering it’s a moment that can go one of two ways.

Does there need to be an explanation as to why DOOM 2016’s soundtrack makes this list? It’s a tour de force of raw aggressive metal that sits alongside the fluid, brutal combat of the game itself and makes a mesmeric ballet out of ultra-violence.

Just take a listen to the track below and just try not to imagine smashing hellspawn into oblivion. In fact, just listen to the whole bloody thing.

Standout Track: All of it

Unlike many of the other selections on this list, Rogue Legacy harks back to video game past for its inspiration. A classic chiptune soundtrack that wouldn’t be out of place next to the greats of the 8 and 16-bit eras. That you will hear the opening track an awful lot and still find it endearingly charming even after the two hundredth time is a testament to the quality of it.

While Nier Automata is revered for its storytelling and design, there’s no denying that the superb soundtrack is an important and breathtaking part of the game.From grandiose operatic boss battle music to dreamy drumbeat tribal thumps, Nier Automata’s musical score manages to consistently compliment the in-game mood with suitably-chosen musical styles.

The highlight comes from the first visit to the Amusement Park. The imagery tied to the lilting vocal work and string arrangement of the musical score is a thing of beauty.

Set in the Japanese economic boom of the late 80s, Yakuza 0 is very much a full-fat depiction of that era and perhaps nowhere else is that sense of time, place and stylish braggadocio better reflected than in its soundtrack.

A rollicking ensemble and aural cornucopia that combines cracking guitar, percussion and drum work to create a truly memorable soundtrack, it’s arguably in ‘Twin Dragons’, the soundtrack to the game’s final fight, that Yakuza 0’s soundtrack stands out as one of the best things you can treat your ears to on PS4 right now.

This Twin Peaks/X-Files-inspired adventure features no voice acting whatsoever, with the actions on the screen mean to signify what’s going on. It does, however, feature musical accompaniment from the Czech Philharmonic Orchestra. The rousing score provided does as much work as the visuals in setting the tone and telling the story.

In one particular segment of the game and its music felt particularly striking. You and your partner head to a low-rent bar out in the sticks, and the house band begin to play a dreamy guitar-led track (a bit reminiscent of Fleetwood Mac’s Albatross) that just absolutely nails the situation as the FBI agent duo finally let their guard down and enjoy a night out on the drink. When the final swell of the track lifts just as you look out on the hazy orange glow of the streetlights below as you drink atop a Water Tower, it feels perfectly timed.

So much of Shenmue can be considered iconic that much is for sure, but little lingers longer in memory than its superlative soundtrack that stirs a well of emotion within all who listen to it.

With music composed by the Kanagawa Philharmonic Orchestra and also featuring professional erhu player Jia Peng-Fang, Shenmue’s soundtrack conveys the scope, scale and beauty of its breathtakingly epic narrative in a way that no other game has mentioned to do either before, or after its original release in 1999.

More than just a cult hit in the pantheon of gaming history, Shenmue was a grand endeavor quite unlike another and it was an effort whose ambition was on display in every note, every string and every beat of its legendary soundtrack; something a whole new generation of gamers will be able to appreciate on PS4 some 19 years after its original release.

If you enjoyed this feature on the best PS4 soundtracks, why not check out some of our other ‘best of’ features, such as the best free PS4 games, best PS4 exclusives, best PS4 indie games, best PS4 fighting games and best PS4 PSVR games that money can buy.