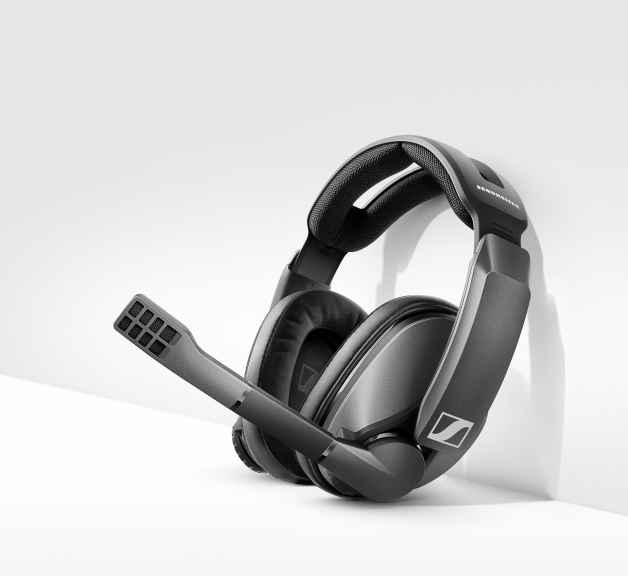 I charged the Sennheiser GSP 370 Wireless Gaming Headset for about an hour when it first arrived on my front porch via FedEx. I have used the headset for every moment of gameplay in the week since then – totalling probably 20 hours or so. Then I synced the headset to my turntable (via my PC) to listen to some Peter Gabriel records last Sunday, and took it to work for a couple of days spent listening to white noise and videogame soundtracks.

I haven’t had to plug the GSP 370 back in for a secondary charge. Far from it – when I check the app that will tell me how much charge remains in the 370’s magic battery, the glowing light of my PC tells me that I still have over 60 hours of use left. In fact, the battery life has been hovering at about 60 hours for three days, no matter how much I use the headset. This thing is bonkers.

When Sennheiser advertises “up to 100 hours of battery life”, it seems that consumers should probably take that claim seriously. In fact, this remarkable headset delivers on every front, combining comfort, great sound, and that remarkable battery into what might be the best headset I have ever worn. I don’t say that lightly.

Connecting to your PC or PlayStation 4 via a small USB widget, the GSP 370’s sound great right out of the box. But if you have access to a PC, it is highly recommended that your download the Sennheiser Gaming Suite to fine tune your experience. The app provides simple controls for adjusting bass, treble, and mid-range, allowing for a much more dynamic experience than what you get straight out of the box.

In addition to being able to save your presets, you can also adjust your mic levels, adding minor effects to your voice to warm it up for your teammates, or gating off noise in loud rooms. Will this make you the fanciest person in your Apex trio? Maybe, maybe not, but it is nice to have the option.

One note on the app – though it is clean and easy to use, I did have some problems getting it to open on my PC. It took several re-installs and restarts before I was able to get the app to appear – which is a shame, because the GSP 370 sounds even better once you get in and mess around with the five-band equalizer offered. My fear is that some users might simply give up and settle for the default settings – which would be a mistake.

The Sennheiser GSP 370 Has No Latency Issues

I normally shy away from wireless headphones for gaming. While the latency in Bluetooth connections is fine for listening to music, I find the delay between action and sound to be unacceptable when I’m playing games. I can’t stand a delay between shooting a gun and hearing the sound, even if it is only a few milliseconds.

But somehow, Sennheiser has managed to overcome this latency issue (probably with the same voodoo they used to construct the battery). After gaming for a while with the headset on, I switched my PS4 over to Netflix to watch a couple of episodes of The Witcher. I am pleased to report that the latency even when watching television and films is so minor it is unnoticeable.

But the Sennheiser GSP 370 really came to life when I wore them for an afternoon playing Hunt: Showdown. This is a game that hits like a hammer with a good headset, with zombies groaning in the darkness, demon crows shrieking as they take flight, and every step you take crunching on the brittle leaves and sticks beneath your feet.

As playing in standard stereo was a revelation, I avoided using the surround options after a quick test run. I’m not a fan of artificial surround in headsets, and the GSP 370’s sound is so precise in standard stereo that I was perfectly satisfied without going over to my PC, syncing the headset, and changing the option.

Gunshots blazing off in the distance could be tracked with pinpoint clarity. Other players sneaking up on me revealed themselves by treading in the wrong place – which I never would have noticed with my standard headset. And Hunt: Showdown’s soundtrack sounds amazing when heard with the clarity and precision delivered by this amazing headset.

The GSP 370 weighs 285 grams (.62 lbs), which gives it just enough heft to keep it from feeling flimsy without feeling like you are wearing a dumbbell on your head. The split cushion on the headband rests atop of my head so comfortably that I had to reach up there with my fingers to see if is was actually touching my head.

The earcups (which are replaceable from Sennheiser’s website for a scant seventeen bucks) nestle nicely around my ears. These are not technically noise-reducing headphones, but when I am using them, I’ll be damned if I can hear anything outside of what I’m supposed to hear. The cups are deep, with the drivers giving your ears plenty of room to breathe.

The adjustable band clicks in a satisfying way, allowing for easy adjustment to your head size. I have a pretty standard size head, but I ran a little experiment. The band has 8-9 spare clicks on each side beyond where I wear it, so it ought to work just as well for fans with larger heads. The band was tight enough to grip the earcups to me snugly without feeling constrictive. After a few minutes of use, I forgot that the headset was there – which is about the highest endorsement I can give.

A knob on the right ear adjusts the volume, and the solid-state mic rig clicks into down place from the left, and that’s it. Beyond the hole for the charger and a little knobby power button guy you can hold down to see how much battery life remains, no other doodads mar the GSP 370’s slick cobalt presentation.

The Sennheiser GSP 370 Is The Best Headset I’ve Worn

I know I am making this headset sound like the second coming of Krispy Kreme, but I really can’t express clearly enough just how impressed I am. The sound quality is crystal. I ran this thing through everything from Tyler Childers’ Little Feathered Indians to NWA’s 100 Miles and Runnin’, and every song I listened to revealed details I have never heard.

And beyond the comfort and sound quality, the fact that the headset arrives with this immortal battery and is still so light weight and comfortable is stunning. I have used this headset for a week with the volume cranked close to the max, and still have 60 percent of the battery life left, which is absolutely unheard of.

I’ve only run across Sennheiser products before in passing, but after playing around with the GSP 370s for a week, I’m deeply impressed. This is a fairly pricey headset at close to $200, but after wearing it for a week, I would say that the pricing was appropriate. This headset is now my new standard – and holds a place of honor as the best headset in my collection.

PlayStation Universe will be reviewing another Sennheiser headset – the GSP 670 – in the weeks ahead. Keep an eye out for that review to learn what differentiates the 370 from an even higher-end set.

The product featured in this review kindly supplied by the manufacturer.

The Sennheiser GSP 370 Wireless Gaming Headset is the best headset I’ve ever worn. Though the PC app needed to finesse the settings is a bit difficult to wrangle, that should not stop players from picking up this amazing product. From the crystal-clear sound quality and amazing comfort to the ridiculous (possibly supernatural) battery life, it is no hyperbole to say that this is the best headset I’ve ever worn.