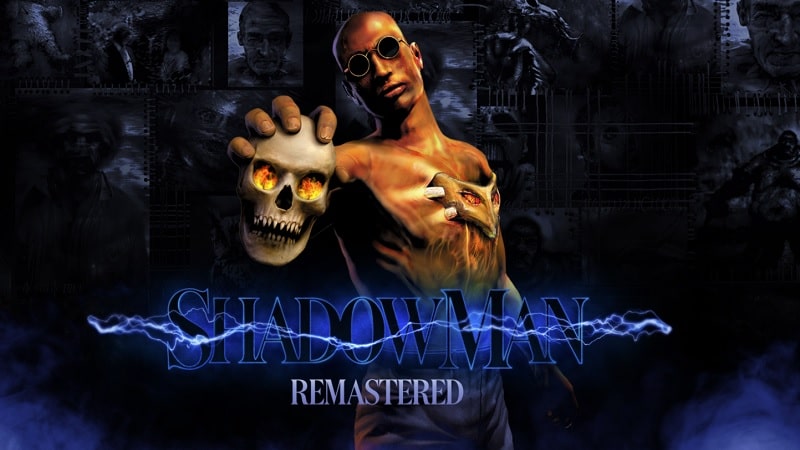 Shadow Man Remastered PS4 Review. Released all the way back in the mists of 1999, Shadow Man was (and is) something of an interesting curio. A third-person shooter take on the titular Valiant Comics source material of the same name, Shadow Man also weaved what we would now refer to as elements of Metroidvania design into its overall gameplay experience where the player would collect items that would open up new parts of previously explored areas. The result was an engrossing and deliciously dark effort that enraptured audiences on the original PlayStation home console nearly 23 years ago.

Remastered by the incredible Nightdive Studios (they being the same wizards who also brought us tremendous ports of the Turok games and most recently, an absolutely brilliant port of id Software’s seminal First Person Shooter Quake), Shadow Man Remastered continues that developer’s penchant for largely respecting the visuals and gameplay of that original release, but adding just enough of a sheen and additional tweaks to the proceedings that it maintains the nostalgia, while being as easy on the eyes (and hands) as a 23 year old game can be.

A Greatly Improved Re-Release Of A Forgotten Cult Classic

First things first, they certainly don’t make games like Shadow Man Remastered anymore. For a start, the plot has the titular Shadow Man raging around the swamplands of the Bayou as he crosses from the living world to Deadside (the, well, dead world) in search of a towering evil that has brought together serial killers such as Jack the Ripper and others to enact the apocalypse by creating a massive citadel full of evil dudes. It’s actually a fairly neat premise all told and one that recalls the more edgy and horror tinged stories that games used to tell from that era without seeming especially cringe or groan-worthy. 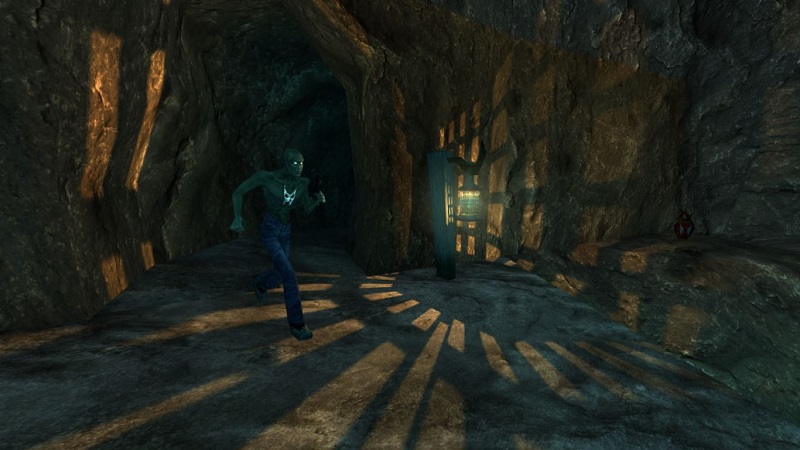 A third-person shooter adventure with a hefty dose of exploration and platforming to boot, Shadow Man Remastered has players blasting and leaping their way through a number of variously themed hell-worlds with a view to reaching the final boss of each area, beating their respective asses and then moving onto the next world and doing the same until you kill enough of these goons to tangle with Legion, Shadow Man Remastered’s gravelly voiced big bad.

Before you get to smash up Shadow Man Remastered’s parade of tough bosses though, you’ll be spending much of your traversing each world, collecting key items as you go in order to proceed. Indeed, Shadow Man Remastered makes no secret to hide its 1990s, Metroidvania-lite origins and the game is something of a slog in this regard, as you’ll be spending a whole heap of time backtracking to access areas that were previously inaccessible and combing odd nooks and crannies for elusive collectibles.

The labyrinthine nature of Shadow Man Remastered’s interconnected worlds is unfortunately exacerbated by the fact that there is no in-game map. Yep, that’s right – there’s no map or any kind of meaningful way-pointing whatsoever. Therefore you need to memorise Shadow Man Remastered’s many winding corridors in order to avoid getting lost – a mammoth feat that is sadly much easier said than done when you’re backtracking through Deadside for the umpteenth time to find a missing relic. 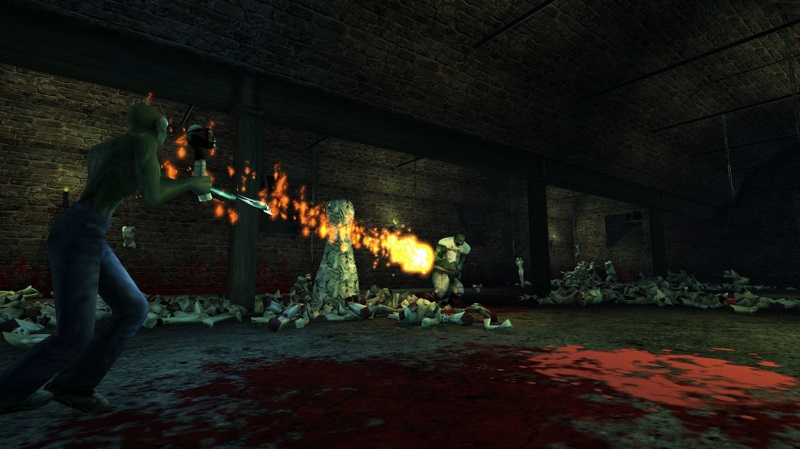 However as I’ve already alluded to – Shadow Man Remastered is something of a vintage and has gameplay systems that hark back to a much earlier era, so if you’re already a fan of the game then you’ll know exactly what you’re in for. When it comes to other folks though, that have been weaned on a diet of newer games where such seemingly trite design considerations as a map are taken for granted, then Shadow Man Remastered’s unfortunately sizable emphasis on backtracking may prove to be a tough pill to swallow.

Though the platforming elements of Shadow Man Remastered also reach back to an earlier time, they do fare better than other aspects of its design though. Certainly, while our titular hero moves with the kind of juddery grace that one would expect from 1990s three dimensional character model, navigating the various ledges, traps, underwater sections and other such perils is a largely effortless and satisfying pursuit.

Outside of the exploration and platforming side of things, Shadow Man Remastered also has our protagonist engaging in a fair amount of third-person shooter combat too where Shadow Man can use physical weapons in the living world and magic attacks in Deadside to get the job done. Indeed, it’s nothing to write home about, with the various chainsaw toting zombies and flying demons being despatched fairly easily thanks to the rather simplistic AI. However, Nightdive Studios has done some little nips and tucks here, providing some improvements such as auto-aiming and bullet physics that weren’t present in the original version of the game. 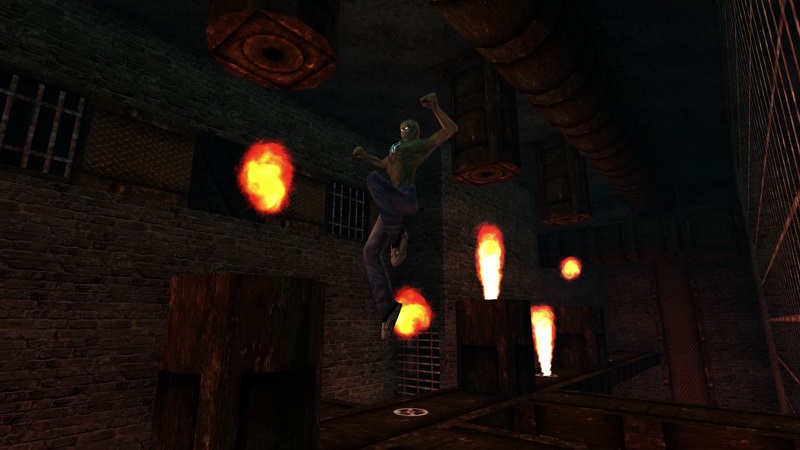 And really, these sorts of improvements which serve to merely embellish the essence of the original rather than detract from its bedrock appeal, are emblematic of Nightdive Studios modus operandi overall. The jointly Vancouver and Washington based outfit has carved out a real niche in the market by remastering decades old games in such a way that they absolutely maintain their essence, but with enough polish and incremental improvements to make those same games more palatable for contemporary players.

In this sense, Shadow Man Remastered really is a treat for fans of the original 1999 release. Though some of the animations are poor and the character models can be comically angular (this was originally a PSOne game, lest we forget), Nightdive Studios has upped the resolution, blasted the frame rate up to 60 FPS, remastered the sound effects, implemented massively improved textures and lighting, and generally improved the technical side of Shadow Man to such an extent that it is as polished as it can be without completely remaking the whole thing from scratch.

In addition to those visual improvements and the more subtle gameplay tweaks, Nightdive Studios has also re-implemented three whole levels that were cut from the original release – not only extending the game duly in a meaningful way, but also doubling up as a real treat for fans of the original game. 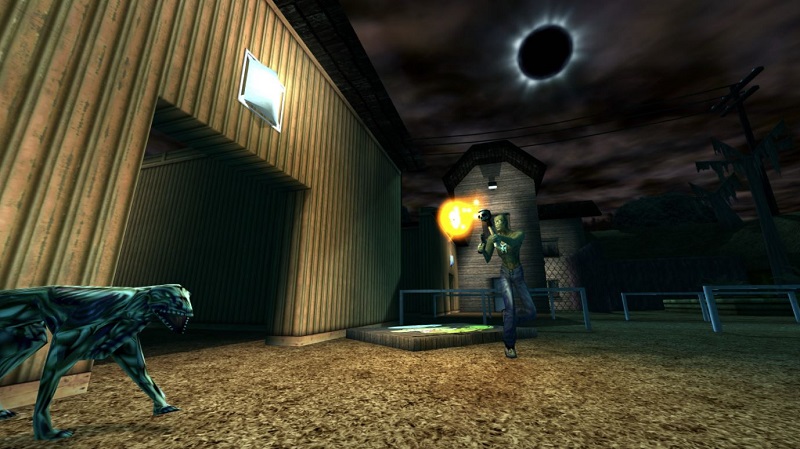 And this is it really – for players that are new to Shadow Man Remastered, many of the systems will seem crusty, archaic and potentially entirely off-putting. If however, those same players persevere for any real length of time, Shadow Man Remastered ultimately reveals itself to be a fairly sprawling and dark action adventure with an intriguing premise and lots to do.

Bolstered by the absolutely stellar and largely transformative remaster work that Nightdive Studios has put into the game, Shadow Man Remastered represents an interesting curio for those who have yet to sample its esoteric delights, while eager fans crusty enough to remember Shadow Man’s escapades from the PSOne days should probably add another point or so to the review score below.

Shadow Man Remastered is out now on PS4.

Bolstered by the absolutely stellar and largely transformative remaster work that Nightdive Studios has put into the game, Shadow Man Remastered represents an interesting curio for those who have yet to sample its esoteric delights, while eager fans crusty enough to remember Shadow Man's third-person horror adventure escapades from the PSOne days should probably add another point or so to the review score.