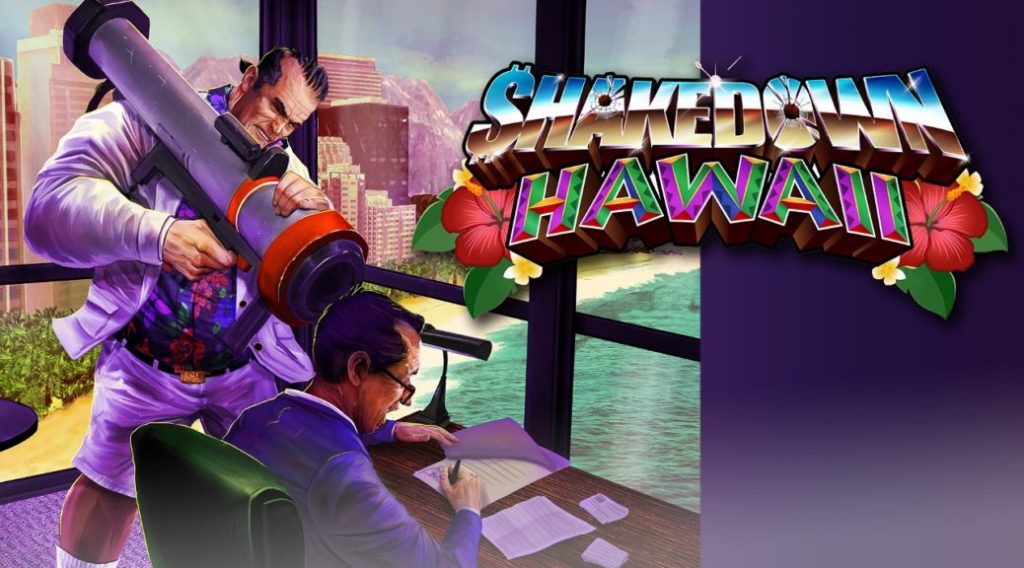 Developer VBlank have finally unleashed Shakedown: Hawaii, the follow up to the 2012 retro open world game, Retro City Rampage. I really liked Retro City Rampage, I enjoyed the over the top arcade action and its absurd humour. I loved it’s easter eggs and its nods to classic video games and video game culture. The writing was humorous and the game did not take itself too seriously. It was fun to play, not overly complicated and a nice little title that is like nothing else on the market. So when the opportunity to review Shakedown: Hawaii came in, I jumped at the chance.

In Shakedown: Hawaii, you play an ageing CEO who has run his company into the ground. While he has been squandering the cash, the company’s services have been overtaken by more modern practices and technologies. Things such as streaming and online shopping have squeezed the profits down to nearly nothing. It’s your job to drag your company back into the modern era, mostly by using criminal and frankly illogical methods to turn your company’s fortunes around.

From the outset the similarities to Retro City Rampage are clear; the open world and a lot of its systems are the same. You control your character in a 2D environment and must talk to characters, get jobs and complete mission and bears similarity to the old-style GTA titles. What separates this game from Retro City Rampage though is its city building aspects.

As well as all the missions, minigames and jobs to do there are city management and city building layers added to the whole experience, and it’s a whole lot of fun to boot. One thing this game does well is it gives you a constant stream of new things to do and new activities to try. From collectables and challenges to jobs and minigames.

During your time in Shakedown: Hawaii you will be buying, upgrading and conning businesses into your possession. This bolsters your real estate portfolio and increases the amount of cash you get on a daily basis. It’s a nice little system that I had a lot of fun with.

Some businesses you buy have additional jobs or side missions associated with them and some businesses unlock more things in their relevant area of the map. It does get quite addictive taking over the map and exponentially getting more things to do. Watching your profits and business rise back to glory is rewarding and enjoyable. Even if some of the things you have to do to achieve this goal are questionable at best.

Shakedown: Hawaii still retains the trademark humour that I loved about the previous title. It made me laugh a lot, it’s all very absurd and over the top whilst still being very novel and enjoyable. There are jokes and references all over the place and I really enjoyed the story and its various uncanny characters. The story will not win any Oscars by any means but as I said earlier it’s nice to play through a game that’s not serious and knows it. Getting stuck into this title between some of the very heavy triple-A titles I am playing at the moment is a breath of fresh air. I can just sit back, laugh and enjoy the ride.

The mad story and characters go hand in hand with the game’s over the top arcade action, too. Not many games encourage driving into traffic and pedestrians but this game does and it rewards you for it – it’s insane.

The missions are over the top too; explosions, fires and complete carnage ensue at every turn. There are also the previously mentioned mini-games and challenges that really drive home the madcap action this game has to offer. For example, I had one challenge that required me to use a rocket launcher at close range to vehicles to see how far I could propel myself across the street. These challenges are littered through the map and often have you doing something completely mental.

Graphically the game is a massive step up from Retro City Rampage, even though the style is the same. The game uses very clean and bright pixel art, both in-game and in the hilarious cutscenes. You can see the difference from its predecessor immediately because the artwork is much more detailed and complex. It really is beautiful – a lot of people turn their nose up at pixel art but I know that every pixel has been lovingly crafted by its artist and I love it. The art style fits the game perfectly and it would not work any other way.

The soundtrack in this unique title is superb also. Grungy beats, synth-laden basslines and snappy electronica combine into a really funky and enjoyable soundtrack. The music is so good I may even look for a copy to listen to outside of the game – a sure sign when you know it’s a solid soundtrack. There are so many great tunes in this game some of them really got stuck in my head too, at times I could hear them when doing other things. I don’t remember an indie game soundtrack being this memorable since Hotline Miami or Velocity 2x.

When it comes to performance – no-one likes a rubbish performing game now, do they? This game performance was flawless, a testament to the developer and it’s testing staff. I had zero crashes, no hitches and no game breaking bugs whatsoever. The game performed to perfection and was thoroughly enjoyable.

Shakedown: Hawaii retains everything I loved from Retro City Rampage. It’s over the top action, it’s hilarious story and characters are all here. On top of that though it does bring some new and very welcomed additions to the table. The city building and management systems are all very moreish and I really enjoyed taking over the map gradually throughout the game.

The graphics are great, it’s not everyone’s cup of tea but I loved the art-style immensely. The soundtrack is top notch and every tune is well designed and fitted the game perfectly. All in all, the gameplay, story, humour, art-style and audio mix to create a very entertaining and unique title that most people will enjoy. Get out there and start earning some dubious cash.

Shakedown: Hawaii is out now on PS4.

Shakedown: Hawaii builds on its predecessor by improving its visuals and music massively. It does keep the unique humour, story and over the top action though, while the city building systems are a welcomed addition and I feel most players will enjoy what's on offer. You get quite a bit of game for your money and there is a lot to do in this uncanny little title.