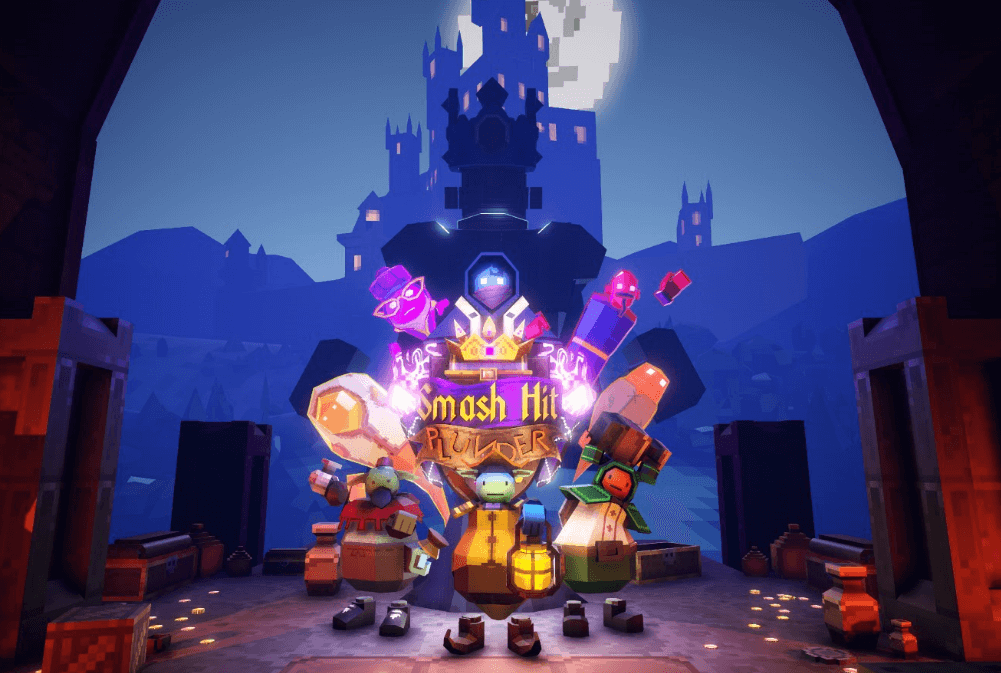 Throwing things around in VR can be fun. In fact, in almost every game I play that has loose objects lying around, I tend to pick them up immediately and throw them. Grabbing fragile items and flinging them at the wall just to hear them shatter is an inherently satisfying activity. There is a certain visceral entertainment value in indulging the fantasy of entering a room and smashing up the place with abandon.

Games like Job Simulator, Shooty Fruity, and Rick & Morty: Virtual Rick-ality have all shown that, when combined with other activities, the simple act of chucking stuff around a room can be wildly amusing. But what happens to this dynamic when you remove Job Simulator’s assigned tasks, Shooty Fruity’s produce-killing time crunch, or Rick & Morty’s science-experiment item combination? Is there fun to be had simply trashing a series of rooms?

Smash Hit Plunder, a new PlayStation VR title by developer Triangular Pixels, tasks players with engaging in repeated acts of wanton destruction. As a young wizard that has recently inherited a haunted castle from their grandmother, players are now forced to contend with the debts of their irresponsible ancestors. It would seem that due to some less-than-attentive bill paying on the part of the deceased, a ghostly debt collector has seized the castle, and refuses to release it until the young wizard gathers enough hidden treasures to pay off the debt. Luckily, Grandmother was a bit of a hoarder (and she clearly didn’t trust banks), as she hid coins and jewels in every crevice of the castle. The young wizard now must ransack the entire castle, ripping it to shreds and destroying everything in sight in order to uncover all of the hidden loot. In practical terms, this means that the player must enter a room with a timer counting down, smashing as much stuff as possible and vacuuming up all of the exposed currency.

Coins are hidden in books, jars, under logs, in ukuleles, under every surface and in every container. The faster you smash stuff, the quicker your coin count goes up. One to three crowns are awarded to players at the end of levels, the count depending on how much loot is gathered within the specified amount of time. Earning crowns unlocks further areas to explore, as well as opening up additional game modes.

Smash Hit Plunder offers a good amount of content for the price. A full campaign that can be played single player or co-op – plus two PVP modes – adds up to a lot of value for players who enjoy the game.

Beyond the progression in the “Treasure Hunt” mode (which I came to think of as “Story Mode”), the game also offers “Scavenger Hunt”, which has players seeking particular items in quick succession while a timer counts down. Players can also eventually unlock “Free Play”, which removes all of the time constraints and allows players to go nuts at their leisure. All three of these modes can be played in co-op multiplayer with up to three additional players controlling little gnome-y guys on the social screen. While the VR player runs clean up by vacuuming the loot, the other players can run around assisting in the destruction. While this is a fun idea, in practice it presents a number of problems.

While the player in VR sees everything in first person, the social screen players see an isometric view of the rooms being explored, with the VR player being represented as a character onscreen. This results in a strangely limited vantage point for the non-VR players, who are sometimes trying to pull items off of shelves that are obscured from view.

The social screen characters are also somewhat difficult to control, with little way to determine what they will pick up or try to destroy next. Standing in front of a table crowded with goodies and pressing the “pick-up” button will randomly grab an item, but the interface is too crudely rendered to really zero in on what object you will end up with.

The VR player, meanwhile, will be struggling with difficulties of their own. I used Move Controllers to play (there is a Duel Shock option available, but the functionality mimics the Move configuration). I encountered some fairly severe tracking issues, with my controllers (represented as thick magic wands in-game) jittering all over the room, disappearing into walls, and sometimes getting stuck in place while my character drifted involuntarily away. Movement in Smash Hit Plunder is unique, reinventing the standard VR “teleportation”mechanic in a manner that is less than successful. While Smash Hit Plunder would have been well served by a simple “point and teleport/click a button to turn” control system, players instead use one of the most unintuitive methods of control I’ve encountered.

The result is a very slow and painstaking manner of locomotion, with the VR player spending more time flailing around trying to move than actually having fun smashing stuff. Don’t get me started on trying to go up and down stairs, which are so difficult to navigate that I eventually began avoiding them until I had no other option.

The alternate to the “stepping”mechanic is to engage “smooth” locomotion, which works in a similar way but skips the stepping in favor of sending the player gliding across the floor. This leads to terrible situations where you accidentally click at the wrong moment, and end up skating across the room (warping through doors, but getting stuck on other objects) unintentionally. Smooth locomotion, for me, was a quick recipe for nausea.

While the wizard is accidentally gliding into the next room (sometimes without their magic wands), the imprecise multiplayer gnomes are busy running around grabbing stuff the VR player wants and flinging it out of reach. And, for some unholy reason, friendly fire is active in co-op multiplayer, which means that the clumsy gnome guys can actually kill the VR player by accidentally throwing empty jars and cauldrons at them, ending the round for everyone.

Since the gnome guys are so imprecise to control, rounds in multiplayer ended up taking far longer than necessary because my “partners” kept inadvertently killing me.

PVP multiplayer modes do not fare much better. Poltergeist Panic and Jewel Duel both place the VR player in race-type scenarios against social screen players with Duel Shock 4 controllers. This places the VR player at a severe disadvantage, as the gnome-y guys run around achieving goals while the mage repeatedly rams his face into bricks in the corner. It should also be noted that in two separate play sessions, my group had trouble getting every player to show up in the game, with one guy dropping in and out of our play session seemingly at random.

Despite all of my complaints regarding the multiplayer and control scheme, there is some fun to be had with Smash Hit Plunder. I much preferred to play by myself, without the additional chaos of other people running around and accidentally killing me.

Playing solo, I was able to take more time to carefully plan my moves, and the ability to behave precisely allowed me to begin to enjoy the rhythm of tearing up a room and moving to the next. It turns out that smashing stuff, taken as the lone play mechanic, is pretty fun for a while.

The graphics style, while Minecraft-blocky, is pleasant and charming, and objects seem to have real weight and heft to them. There are also a lot of fun little secrets hidden throughout the levels, which got lost in the whirlwind of multiplayer but were very entertaining to discover while playing by myself. These levels have been crafted with care, and in single player it is possible to appreciate the hard work that went into their construction.

But like throwing rocks through old windows, or smashing the thin sheets of ice that form over puddles on a blustery morning, the pleasures brought by Smash Hit Plunder are fleeting. The control scheme is a tough hurdle to overcome, and I was never quite able to stop thinking about what my hands were doing long enough to truly enjoy the game.

There might be a fun game hidden in the halls and dungeons of Smash Hit Plunder, and the core mechanic is satisfying. But attempting to crash through the barrier caused by the difficult control scheme to reach the entertaining parts of Smash Hit Plunder ultimately feels a bit like a cauldron to the head.