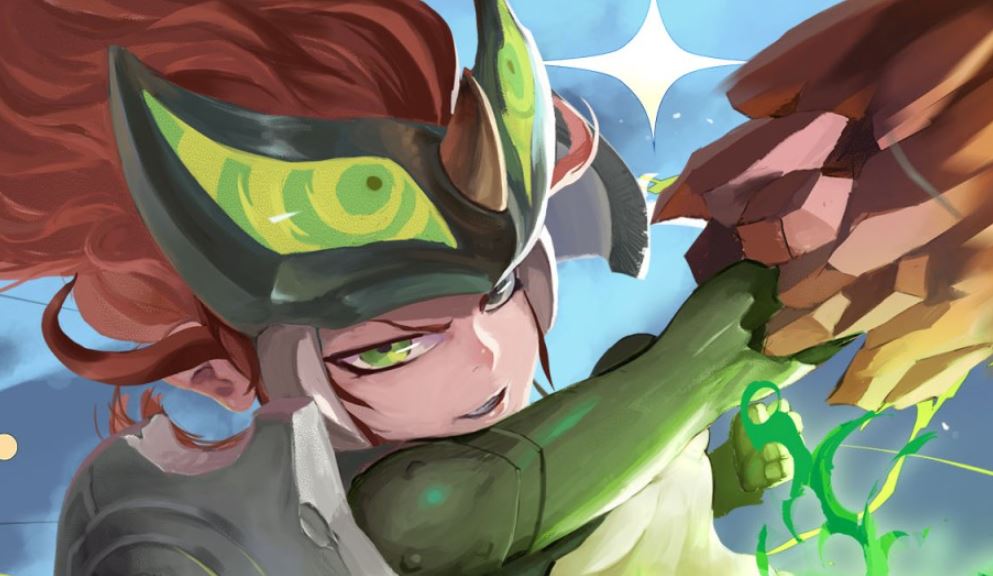 Smelter PS4 Review – The opening cutscene to Smelter features a wonderfully animated pixelated art style that could sell the game on its own. Even the cover art for the game has that kind of appeal to it. Unfortunately, the kind of effort put into the initial presentation doesn’t carry over into the rest of the game. In fact, I’d care to wager that the opening animation blew most of the game’s budget.

Eat From The Fruit

The game starts with Adam and Eve in the Garden of Eden. An apple appears on a tree, and Adam eats from it, causing a massive explosion off in the distance. Eve is then separated from Adam as the world disappears in the explosion, and she falls into an almost endless darkness. She finally lands in a most peculiar place, and after wandering a bit she meets an angel named Smelter.

Smelter takes the form of a green owl-gremlin looking creature, and he coaxes Eve into working with him. Smelter promises Eve that he can help her find Adam by allowing her to use Smelter as armor to fight demons. In exchange, he asks Eve to help him regain his former glory by claiming for his own some of the misbegotten land they find themselves on. At the same time, he’s constantly talking out the side of his mouth to get what he wants before Eve gets anything in return. 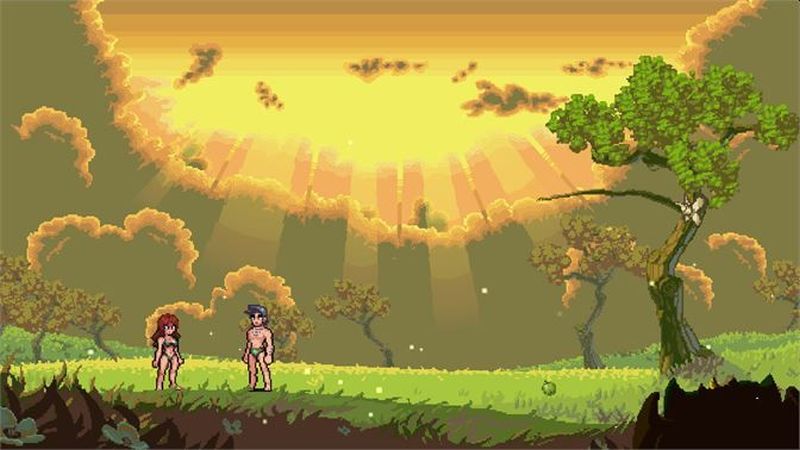 Everything in Smelter feels tongue-in-cheek, for better or for worse. Dialogue plays along with this delivery, as Smelter talks directly to the player as often as he talks down to everyone else. He always has a quip, he’s quick to take credit, and he’s even quicker to place blame on someone else. Smelter is a real bastard, but he doesn’t get the kind of needed attention for his character to be properly developed.

The first type of gameplay that Smelter features is the standard side scrolling 8-bit adventure. I brought up the game’s cheekiness for a couple of reasons. For one, the 2D sprite animation goes hand-in-hand with the campiness, even to the point where they took the time to animate an insane bounce in Eve’s chest. In contrast, this side of the game actually works comes with the overcompensated expressions and reactions that the characters make.

With the half-handed style comes a similarly odd leveling system. Sprinkled through each zone are forges, which simply grant skills for Eve to use. These are basic skills as well, such as ground pound or double jump. Apart from a few special skills in the “skill tree,” most of them just feel like they should have been available in the first place. 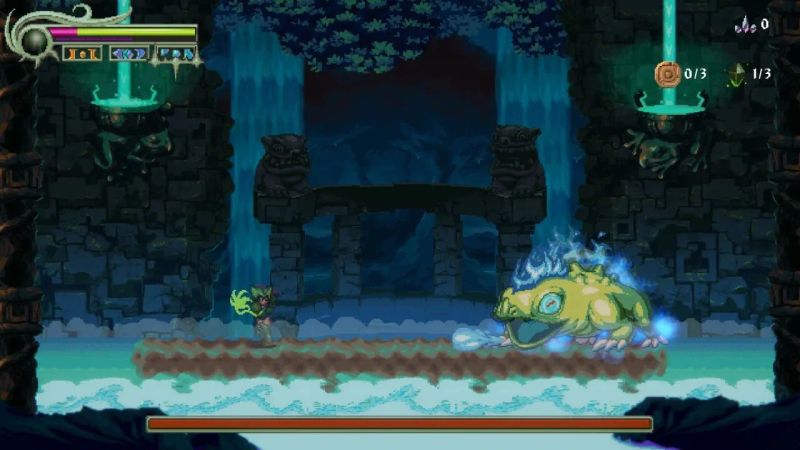 There are three different zones to the map, and each one reflects a different element. These elements can be toggled with L2 and R2, granting you access to the few unique skills and attacks from each element on the fly. For instance, Earth gives you a double jump while Electric gives you a lightning whip. These skills do not feel earned, but jumping between the three elements only adds to the simplistic gameplay.

The greatest strength of Smelter’s gameplay is its side scrolling. It’s the standard jump-punch-loot foray you would expect from any normal side scroller. As new skills open up to you, the levels become more challenging, asking you to use the new skills in the process. The way the levels adapt to your skills feels good, even if the way you get those skills does not.

I generally don’t seek out tower defense games, but a good one always grabs me and never lets go. With Smelter, the tower defense mechanics do nothing to help make this part of the game enjoyable. This lack of enjoyment comes down to a couple key execution choices. 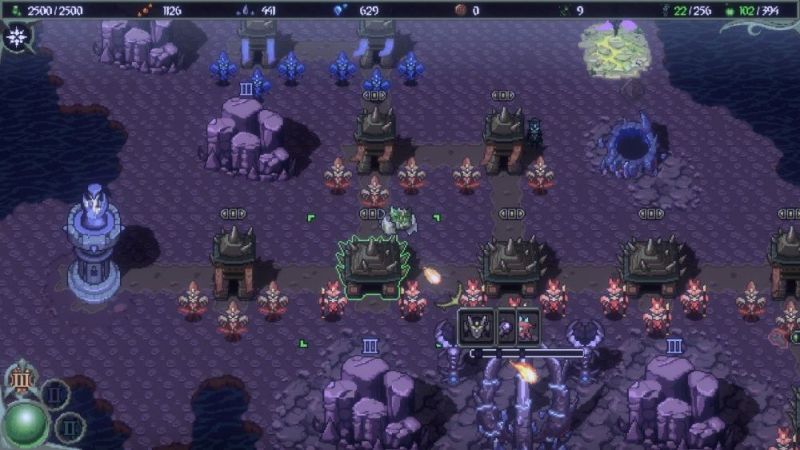 The first issue is a general lack of concise explanation. Early on, the game tells you that you need apples for your soldiers and that you need soldiers to fend off enemies. What the game doesn’t tell you is that the apples do not behave like food but rather a placeholder for each soldier. So, building a Shrine, which grants four apples each, means that you can now create four more soldiers.

Putting it into words this way makes sense. However, if they had replaced the word “apple,” an obvious nod to the game’s themes, with something like “bed” or “room,” then it would have been more self-explanatory. With the provided explanation, it initially sounds like you must feed your units instead.

The next issue is managing and moving units around. In the first actual exchange, you are given a handful of existing ground units, and you are told you can move them wherever you need. Assumedly, this game mode is programmed to accommodate a controller. So instead of giving commands to units directly, you select different crafted structures on the map and then assign up to three units to defend that structure. 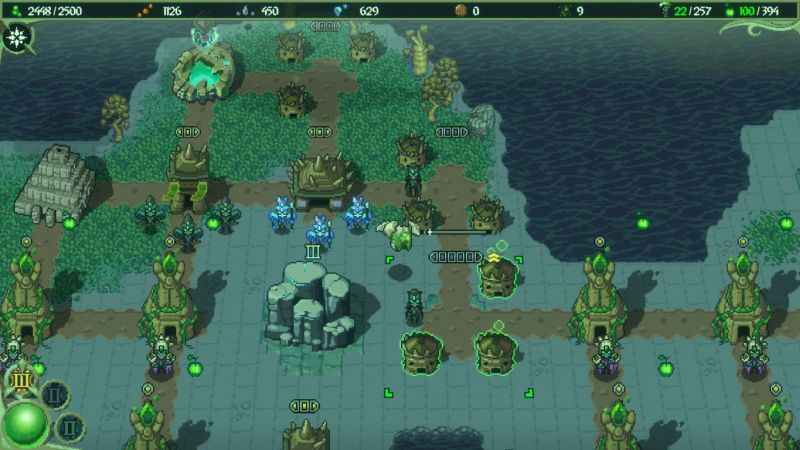 All of these cumbersome tower defense mechanics come to a head when the heat is on. You can’t pick which units will go to the structure that you specify. They either come from the Shrine if there are spare units, or you have to remove units from occupied structures first. If your structures are not close together, then you’ll have to spend a lot of time juggling where you want your units to go.

More often than not, I got stuck in a failing loop that I couldn’t counter. Enemies kept swarming in and destroying everything and then would just stop spawning until I built structures. There’s no actual game over screen, but you also don’t get anywhere in this situation. So, I would just restart these exchanges over and over until my units cooperated enough to survive through the engagement.

Ultimately, Smelter sees you in one moment running through a simplistic 2D world with Eve, punching and kicking baddies. Then you’re forced to go through a barrage of incoming enemies with thoughtless tower defense mechanics that work more in the enemy’s favor than your own. You can’t progress in the game if you don’t do each tower defense sequence as they pop up. The frustration from the tower defense portions of the game make the side scrolling sections feel refreshing, but that’s not saying a whole lot.

Smelter could have been a nice diversion if the game had only included the minimal side scrolling aspects, then it would have been a good mediocre romp. However, a frustrating tower defense mode riddled with bad choices makes the simple side scrolling side of Smelter feel wasted. Please avoid this forbidden fruit at all costs.


Smelter is out now on PS4.

The side scrolling side of Smelter has a lot going for it. It has a welcome execution that doesn't demand much effort and doesn't bog you down with much, even if it is overly simplistic. The tower defense side of Smelter contradicts this simplicity, however. Bad control choices coupled with halfhearted explanations makes it a hard sell for the entire package. Smelter has something unique, but that's nowhere near enough to warrant your time.