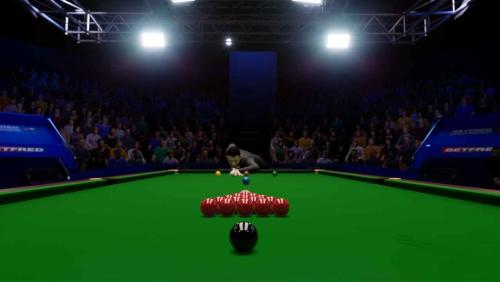 With a packed calendar of tournaments, a stunning physics engine, and a roster of all your favourite potters, Snooker 19 is a dream for fans of the popular sport…almost. Fully licensed by the officiating body, Snooker 19 comes packed with the most famous snooker players on the planet. From Ronnie “The Rocket” O’ Sullivan to John “The Wizard of Wishaw” Higgins, there’s an incredible 128 players that you can choose from and play against.

When you take into account the sheer amount of players on offer, it’s somewhat forgivable that a chunk of the character models – despite being identifiable as their real-life counterparts – look like they’re straight out of the PS2 era. However, it’s still a little disappointing. Despite that initial bad impression, you’ll be spending most of your time with your head down at that table, partaking in the likes of the Masters and playing at the crucible or the World Snooker Championship, which should prove to be quite a draw to fans of the sport.

Snooker 19 Features A Lot Of Content To Get Stuck Into

On top of that, there’s some decent multiplayer options for match-matching. These include global online tournaments, plus some variations of snooker if you want to try something different, such as 6-red which is played with the six colour balls and six reds.

Despite the unimpressive start, (as soon as you see the first character model), the quality of the tables and the lighting and graphical polish of the balls, soon put me back in the mood to take Snooker 19 seriously.

Then when you start to play, it’s clear that the physics engine is the star of the show and where the developer has spent the most time tweaking it to perfection. As someone who has spent a number of years playing on a snooker team, it’s impressive to see the balls react how they should.

Whether you’re applying a curve shot, back spin or side as you attempt to position the cue ball for your next shot and rack up a big break, it’s quite satisfying as a novice snooker player to replicate some of the shots you’d play in real-life on the screen and seeing them work out exactly how you planned them.

The control scheme works well too. Using the left stick to initially line up your shot, you can hold down L2 to move the target line (aiming aid) more slowly for accuracy.

Holding down the R2 trigger, you can then decide exactly where you want to hit the cue ball, and the white trailing line on the table shows you which direction the cue ball will end up. Then it’s up to you to choose the power required, before you pull back on that right thumbstick and take your shot.

Like real snooker, there’s a fine line between making that perfect shot and ending up at the wrong end of the table. Even in easy mode, I’ve yet to score a break over 50 with aid assists fully on, and if you choose one of the harder difficulty modes, the aiming aids are reduced or removed, making it a lot harder.

Where things don’t quite go according to plan are some of the matches against the A.I. Even the lowest ranked players on the easiest settings will pull often off some ridiculous shots to rack up a decent break. It feels it needs a lot more balancing to make it fair.

One of the guys I was playing against also got stuck in a loop and pulled off an identical shot no fewer than five times in a row. To be fair, this example of poor or over-powered A.I. didn’t affect the fun I had with Snooker 19 when it was my turn at the table. It just made me concentrate a lot harder with the knowledge that if I miss a pot he might clear up!

On the easiest setting, with all aids available, you’ve at least got a fighting chance and there’s nothing more satisfying then a well-placed shot where your cue ball lands in exactly the position where you wanted it to land. Pumped up to the hardest level and I was barely at the table.

Overall though, Snooker 19 feels fantastic to play when you’re potting balls left, right and centre, and the accurate physics engine really makes it feel realistic. However, there’s one feature missing that is hard to forgive.

Lack of Camera Angles Is Disappointing

The lack of camera angles to choose from is a big disappointment specifically the lack of an overhead view. You should also be able to walk around the table and view your shot from every angle so you can work out positioning and get a better view of whether you can sink that pot.

With the current angles you can utilize, the aiming aid beyond your target ball is sometimes too far away for you to make a good judgement.

Consequently, the omission of multiple camera angles means that some of your shots are a bigger gamble than they needed to be; and that simply shouldn’t be the case.

Still, with its not-so-great characters models, lack of camera angles and misbehaving A.I., there’s no doubt as a fan of snooker I’ll be returning to Snooker 19 regularly to hone my skills and attempt to win some tournaments. Snooker 19 feels great when you’re at the table sinking pots and moving that cue ball around the table like a pro, and it’s a real testament to Lab 42 that they got that vital mechanic spot on.

Snooker 19 isn't perfect, with a major feature lacking and some over-powered A.I., but it's somewhat forgivable thanks to the accurate ball physics and wealth of tournaments, which makes your time at the table sinking balls extremely satisfying.