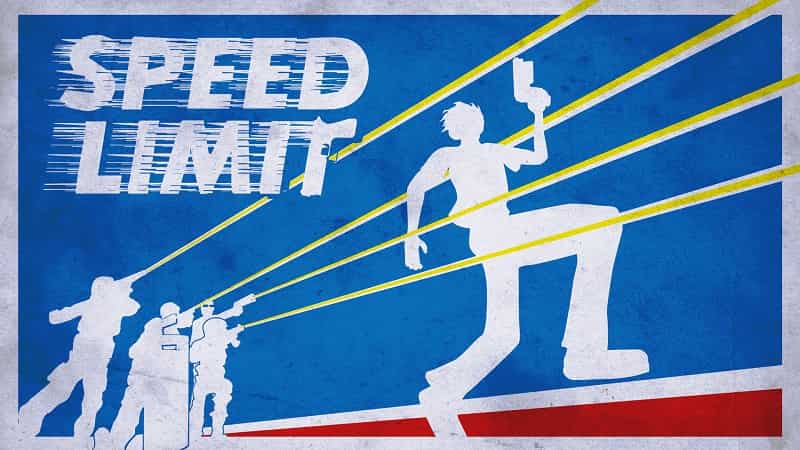 Speed Limit PS4 Review. Blending genres and styles isn’t exactly a rarity in video games these days, but that doesn’t mean there isn’t room for some interesting mixtures to still be composed from the scraps and bones of the past. Some are subtle at doing so, others less so, but either way, they can be just as effective.

Gamechuck’s pixel art action outing Speed Limit throws together a selection of classic game templates, an arcade mentality, and crucially, a directorial twist on that. While it isn’t always a successful concoction, Sped Limit generally meshes together in a satisfying manner.

Speed Limit is, at its core, a relentless, unforgiving arcade game that requires repeated failure to learn its array of steadfast patterns. In a sense, it places you as director/stuntman for an ongoing action movie in a 2D pixel universe, lining up each set-piece just so, with many repeated ‘takes’ along the way. 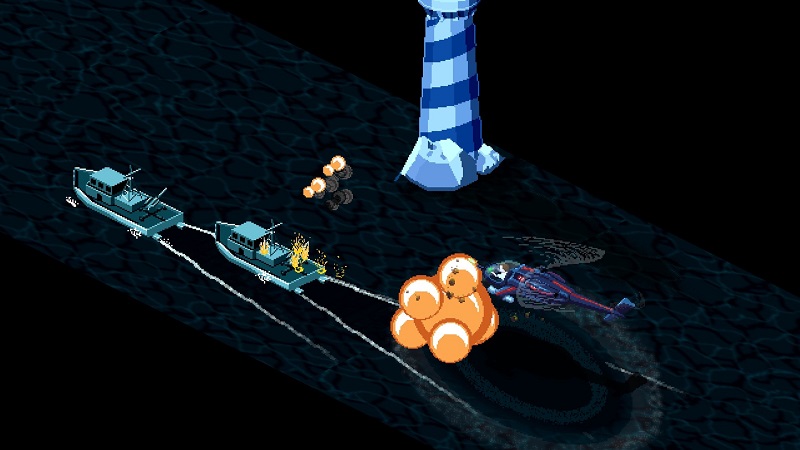 It starts with a train ride gone wrong, where bullets start flying and you, a seemingly regular guy, must run and fire their way through gun-toting soldiers, attack helicopters, and rapidly-deteriorating train carriages. There’s barely a moment’s respite from heavy fire and danger, which leads to many deaths, and more than a little frustration.

It’s not entirely unmerciful in that it has checkpoints at various sections of each stage, and unlimited retries, but repeating sections over and over naturally becomes a touch repetitive.

It’s why the constant shifts in perspective and style help prevent Speed Limit from burning out too soon. Every couple of stages sees the action morph into a different kind of retrotastic game. There’s top-down car chases reminiscent of early Grand Theft Auto and Spy Hunter, Outrun-inspired bike sections, isometric Desert Strike-esque chopper fights, and jetplane dogfights a-la-Afterburner as Speed Limit virtually jumps from one arcade cabinet to the next in its explosive action movie odyssey. 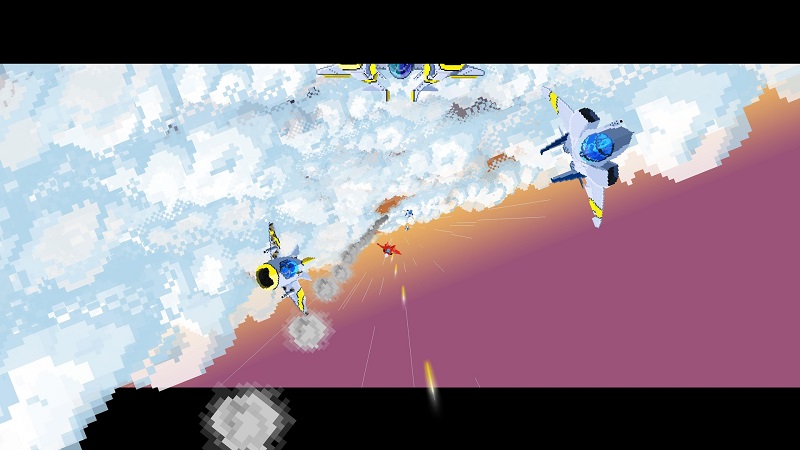 Each does a pretty good job of emulating the game it homages, and while that’s a little bit detrimental to the overall package’s identity, there’s enough of a personal touch to them to prevent it from being nothing more than a selection of highlights from classic games stapled together and injected into your nostalgia glands.

As a result, Speed Limit doesn’t end up a one-note slog, instead, it rewards your persistence with a new challenge fairly regularly. It wraps itself up before the gimmick outstays its welcome. Frustrating as it does get, there’s at least some respect to the player’s time in Speed Limit’s structuring.

As with most successful attempts to weaponize nostalgia for old video games, developer Gamechuck understands that you can’t rely on the old hits entirely, there have to be some modern flourishes in there, whether that be some accessibility or remixing of expectations. Speed Limit is almost exclusively camped in the latter of those ideas. 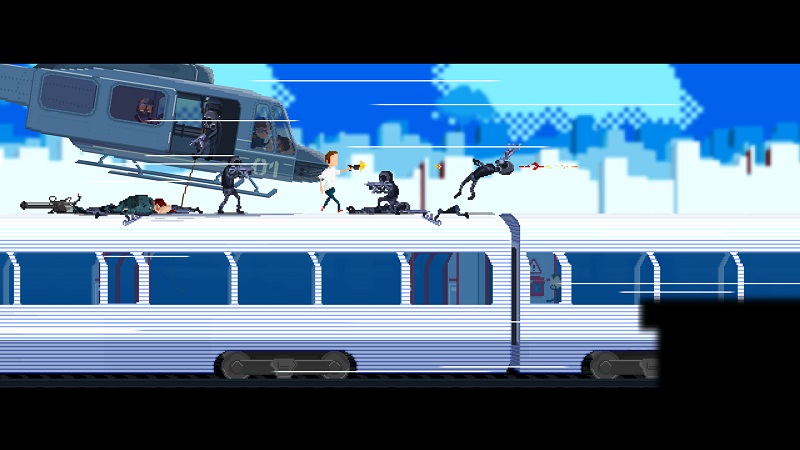 For better or worse, Speed Limit goes from tough to all-out punishing as it progresses, allowing only for the patient and the stubborn to push on through to its chaotic climax. This feels far more like a game to be perfected than one you simply beat.

Emboldened By Its Directorial Subtext, Speed Limit Becomes Something More

It’s actually more satisfying to get through long stretches without faltering or failing than it is to chip away at a small section in hope of progressing. In the grand scheme of things, Speed Limits set pieces are relatively short, so once beaten, they do encourage short burst play to learn the patterns and pull off unbroken runs, through its relentless death marches if that’s what you want from it.

That’s certainly the way I feel it works best. Taken simply as something to endure and complete in one go, it’s a far less memorable experience. Taking the director/stuntman approach to it adds an extra layer of depth to something that is otherwise quite straightforward in its approach. 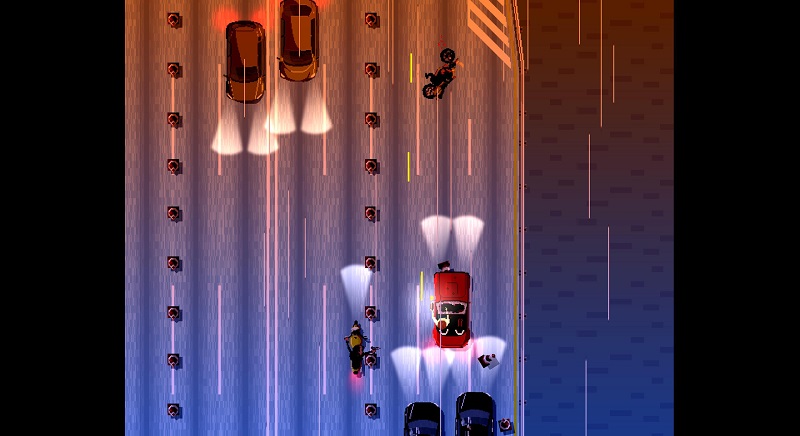 I must admit, during the opening stages, after figuratively slamming my head against the brick wall of Speed Limit’s difficulty, I was beginning to think it would be unable to go anywhere new. Yet while the difficulty ramps up, and the need for twitchy movement increased, the actual challenge varies in turn. There’s an air of unpleasantness to getting through levels the first time born of the repetition and frustration that dissipates when you look upon them again afterward.

The simple, yet colorful, chaos that permeates every screen of Speed Limit captures the attention as well. Gamechuck manages to show a lot of important detail in what is a relatively basic visual style, with the character animation handled smartly enough to signpost what to expect of enemies and situations (well, once you’ve been kersplatted by them enough to figure them out).

Understandably, Speed Limit’s style and ethos have a varying mileage. If you’re of a certain age, the many nods to 80s and 90s classics enhance the package greatly, but there’s definitely a need for patience for anyone else to break through Speed Limit’s tough exterior and taste the good stuff inside.

Speed Limit is out now on PS4.

Speed Limit is a heady mixture of tough as old boots nostalgia that requires patience and/or stubbornness to crack its punishing action set-pieces. The joy comes from trying to perfect your run on Speed Limit rather than simply beating it, and there’s varying mileage in this. At the very least, it’s a fun nostalgic showcase of several classic game types mushed together in a surprisingly cohesive fashion.