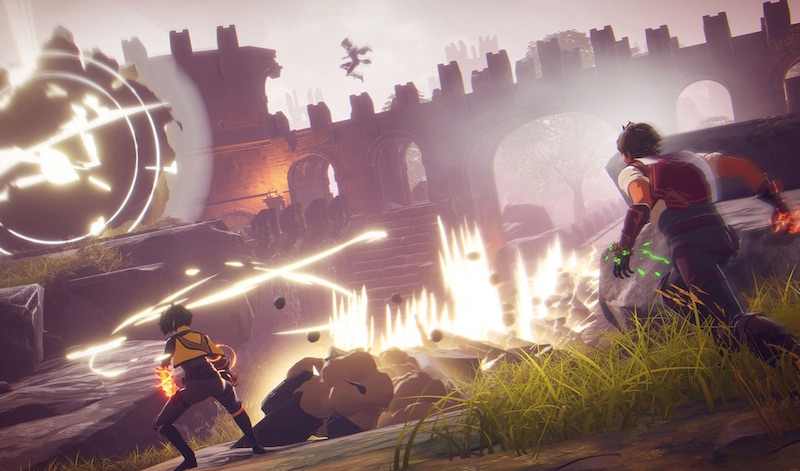 Spellbreak PS4 Review – So battle royale, but angry wizards. That’s essentially the premise being offered by Spellbreak, a long gestating online multiplayer only effort that has finally made the journey to PS4 after an extended spell (pun absolutely intended) on PC. In a time when seemingly most folks still seem quite keen to cram po-faced military folk and their bang-bang into the battle royale genre, it’s refreshing to have something like Spellbreak that tries for something a little different.

For a start, as a purveyor of spectacular spells you aren’t strictly tied to the laws of gravity as you might be in other battle royale efforts. In practice, this means that you can soar into the air, glide into combat with ease and generally have far more options for evasion and traversal than you might otherwise have.

Speaking of combat, Spellbreak again puts something of a unique stamp on the battle royale sub-genre. Depending on which of the six classes you players choose before each battle, a whole variety of elemental spells and abilities are available that can be used to stymie or otherwise outright destroy your opponents. Where Spellbreak really innovates is in how it permits players to create cunning elemental combinations to wreak havoc upon their foes.

For instance, while conjuring a slow, creeping toxic cloud around enemy wizards creates a slow damage over time effect, setting the toxic cloud on fire creates a flash explosion effect which not only massively damages the poor folk at its epicentre, but also those who happen to be unfortunate enough to be lurking nearby.

As such, though Spellbreak certainly rewards those players who are keen to throw together outlandish spell combinations in order to get ahead, the appropriate mana restrictions and spell cooldowns help to keep folks honest. Simply put, kicking out a spell combination will leave you vulnerable for a few crucial seconds – which could be all the enemy requires to vanquish your spell-chucker in short order.

Speaking of being vanquished, Spellbreak handles healing in and regeneration in a similarly considered fashion. Rather than just automatically scooping up chunks of armor and health to replenish yourself, each potion and armor shard must be manually applied as a specific action – leaving you something of a sitting duck for a second or two in the process.

Indeed in Spellbreak, knowing where you can retreat to in order to consume a life-saving potion is as crucial as having an unerring aim with a devastating fireball spell. Because of this system and the aforementioned spell cooldowns, Spellbreak impresses a more intriguingly cautious approach upon players than they might otherwise be inclined to take in other battle royale efforts.

In addition to the numerous spells that are at your disposal, Spellbreak also provides a variety of other ways for eager wizards to even the score. Dotted around each battlefield are loot chests which much like other examples of the battle royale genre, serve to dish out items of increasing quality to those who are lucky enough to find them.

In Spellbreak, these chests have items which not only improve base stats such as your movement speed and casting cooldowns, but they can also provide game-changing abilities such as invisibility, teleportation, the ability to fly and more in a bid to keep things decidedly more spicy and unpredictable than they might otherwise be.

Another one of the most endearing aspects of Spellbreak is simply just how it looks. Boasting a gorgeous art style that doesn’t look like a million miles away from the cartoony and finesse-steeped designs of Blizzard’s World of Warcraft, Spellbreak is easy on the eyes to say the least – and runs extraordinarily smoothly to match.

Where the visual presentation takes something of a hit is in the lack of variety in the various landmarks and structures that are dotted across the battlefield. Often little more than ruins or spiralling towers, there’s nothing that stands out as being especially memorable in the Hollow Lands which serve as the backdrop to Spellbreak’s bombastic arcane battles – a disappointing revelation considering the otherwise sublime visual design glimpsed elsewhere.

Something else which is a touch disappointing at this stage is that the only primary multiplayer game type which is available is squad play, with Solo and Duo modes set to be unlocked at a later date as and when the developers are happy with it. Needless to say that makes Spellbreak feel a little more sparse than it perhaps otherwise should at launch – though the developer promises an ambitious content roadmap to make up for that fact.

Even though Spellbreak could do with more modes and content in the here and now, you’ll certainly be able to find an online session pretty quickly, thanks in no small part to Spellbreak’s much ballyhooed cross-play and cross-progression support. In terms of progression, Spellbreak is commendably well designed. For a start, real world money can only be used to purchase cosmetic gear such as new outfits and special effects (as it should be), while incentive to play as each class is provided on account of the more advanced spells, emotes and premium currency that you can get for levelling up towards the current level 20 cap.

As a fresh and largely innovative take on the battle royale genre then that looks to reward long-term play with worthwhile progression and an ambitious content roadmap, Spellbreak’s future looks bright indeed. Also think about this – how many other games let you combine a tornado with the fire element to create a FLAMING MURDER HURRICANE? Yeah, exactly.

Spellbreak is out now on PS4.

An intriguing take on the battle royale formula which swaps out soldiers and guns for wizards and spells, Spellbreak is a touch limited in its current form certainly. However, resoundingly solid fundamentals, a gorgeous art style and a promising content roadmap all come together to create a commendable and entertainingly sophisticated battle royale effort that everyone can enjoy.