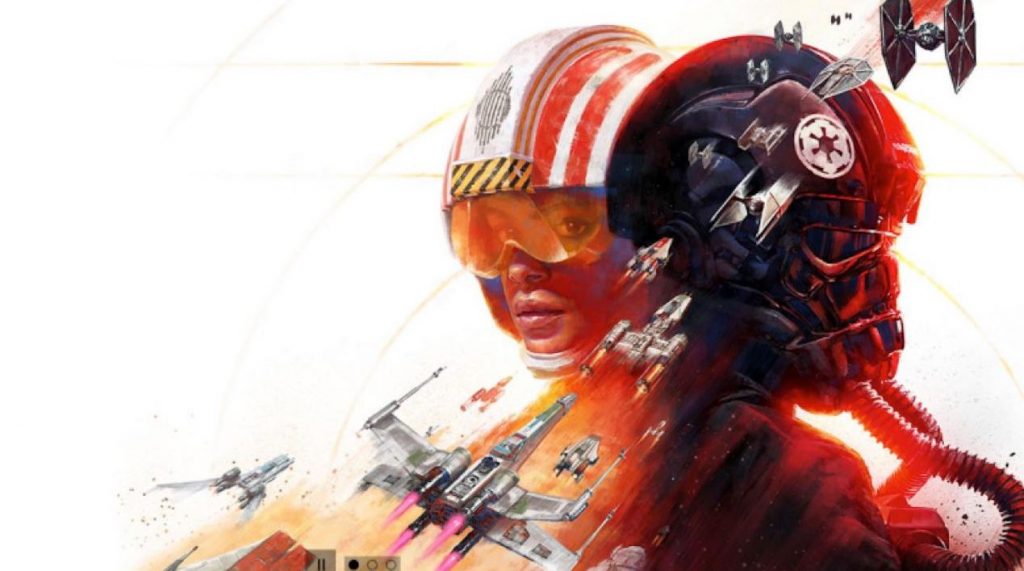 Star Wars: Squadrons PS4 Review – Before I get into the meat of this review, let’s get one thing straight. I love Star Wars. Always have, probably always will. So when I say that Star Wars Squadrons was one of my most anticipated games of the year, that’s almost underselling it. Fortunately, it lives up to most of my expectations while it definitely lets some big ones down, hard. As it currently stands though, you can add Star Wars Squadrons onto the list of things EA has done to win back some good favour in the hearts of Star Wars fans, especially after the dismal microtransaction-fueled-launch of Star Wars Battlefront 2.

Get Ready To Fly

The moment that Star Wars Squadrons had finished downloading on my console, I strapped on my Poe Dameron helmet, slapped down the visor, and prepared myself for what would undoubtedly be a long play session. Immediately after that, I popped the Resistance’s orange-tinted visor back up because let me tell you there is nothing about this game that isn’t gorgeous. EA has done some incredible work to make everything look beautiful. From each individual starfighter to the hangers in which they’re kept, to each of the areas you’ll have the pleasure to fly around. It’s nice to see so much attention to detail, and the first person view in the hanger or in the briefing room helps to give you a closer look at everything.

Nice as it is though, we’re not here to look at what’s on the ground. You’ll spend most of your time looking towards colourful space anomalies, and spaceships be they broken or not, and the horizon. EA Motive has delivered and then some with regards to the visual demands of the Star Wars universe. Star Wars Squadrons definitely doesn’t have the variety of Star Wars Battlefront 2, but to be fair this was marketed and priced as smaller experience. You just kind of hit that point where you understand this isn’t a full-fledged AAA experience with all the bells and whistles quicker than I would have liked.

While it may not have a huge variety of content, Star Wars Squadrons is a focused experience, and that is not at all a bad thing. What it does, it does really, really well. You’ll have no shortage of fun blasting TIE fighters away again and again whether it be through the story mode or multiplayer. The flying controls are great, and there is a fair amount of depth to becoming the number one pilot in the galaxy. The ability to switch between power settings, whether it be full strength to your weapons, shields or engines adds a solid layer of strategy. Figuring out which loadout works best with your preferred playstyle offers a lot of customization and can help to build your perfect starfighter.

It should be no surprise to you dear reader that this game shines brightest when it comes to the multiplayer. The single-player serves to teach you each of the flying mechanics and some of the strategies you can employ in different game modes and it does that just fine. Specifically though in the classic 5 v 5 squad dogfight mode, which is where Star Wars Squadrons peaks. It’s a better test of skills and far less tedious than Fleet Battles, which can still be fun, though more often than not wind up being either unfair matches that get dragged out for far longer than they should. It can be an excellent game mode, so long as you play with a full squadron on your wing.

Star Wars Squadrons is however far from perfect. My main gripes, unsurprisingly come from the story mode. I didn’t have the highest of expectations going in, and after experiencing the story within about 8h or so I felt like it was rather okay. The plot wasn’t anything we haven’t seen before from Star Wars, but it almost felt as if Star Wars Squadrons didn’t want you to be interested in the story. The most interesting dialogue comes from these optional conversations you can have with each supporting character within Titan or Vanguard squadron. The keyword there being “optional”. Decisions like this will always confuse me, why make the most interesting part of the game so meaningless that the player can just ignore it completely?

The conversations themselves only end up serving as large dumps of exposition that at times help to flesh out the characters of your squadrons and shed some interesting light on them. Each time I began to get interested in a character, the conversation ended. Topics would be dropped and never brought up again, and the in-flight dialogue during missions is restricted to one line sound bites that don’t really offer anything.

A not so simple but great fix would be to add in dialogue options for the player, even just simple ones that allow me to ask my wing-mates more questions about their past or the events that just transpired. Just anything to make me feel more like I was actively engaging in the world rather than just being spoken to the whole time. A call back to something you said during a fight or a line from one of your squad members that adds more emotional weight to completing a mission would help to make it all feel a lot more impactful.

It ends up feeling like a really long tutorial on how to play the game and makes me think they didn’t even need to write a plot to string it all together in the first place. In fact, I would have almost rather they didn’t. The coolest thing about the story though is the cameos. Though they are really just used as these fancy showpieces to pull at the nostalgia-strings of Star Wars fans, it is still really cool seeing characters like Hera Syndulla and Wedge Antilles, along with other subtle nods to the Star Wars universe across customization pieces for your starfighters.

Besides how the story is told, the missions themselves are quite fun because the core gameplay is still very fun. Again though, it felt like interesting things were brought up only to be dropped just as quickly. Towards the end of a couple of missions you have to fly quickly out of a small area, and it felt like something right out of the films making tight turns and rolling at the right second to just barely avoid an asteroid or large pipe inside a ship. I would have loved to see more of these sequences throughout the story, and a time trial based game mode that lets you try for the fastest time would be a welcome addition.

Despite these gripes, however, Star Wars Squadrons remains a fun and exciting time on just the dogfighting alone. Something that also needs mentioning is the very welcomed sight of absolutely no microtransactions whatsoever. At least, for now. Though I have no doubt that EA might add future in-game purchases, at least in the way of aesthetic customizations for your starfighter and pilot. Additional content such as more maps and ships would help to flesh out what is a great foundation and help to keep players flying, so long as they’re not behind a paywall. The music in the game is also exceptional, and Gordy Haab once again demonstrates that he has more than just a knack for creating epic Star Wars soundtracks that perfectly fit the games.

I would have also liked to have been able to walk around in the briefing rooms and in the hangers. I get that the blink function is for the VR players, but when playing without it being able to walk around and get an even closer look at everything would have been cool. That is by far my most minor gripe, but it’s one I’m mentioning in the hopes that it can be added into the game at some point in the future. In the meantime, if you’ll need me I’ll be in the flying around making laser noises like I’m 5 years old again.

Keen and observant readers will notice that I made no mention of the VR functionality in the game, and that’s because I didn’t play the game in VR. But PSU’s very own John-Paul Jones did! Look forward to his coverage of what it’s like to play Star Wars Squadrons in VR.

A niche on top of a niche, Star Wars Squadrons makes up for it's almost empty feeling with core gameplay that just does not stop being fun. While the story falls flat, the multiplayer shines bright enough that you can still have an incredible Star Wars experience each time you jump into the cockpit.