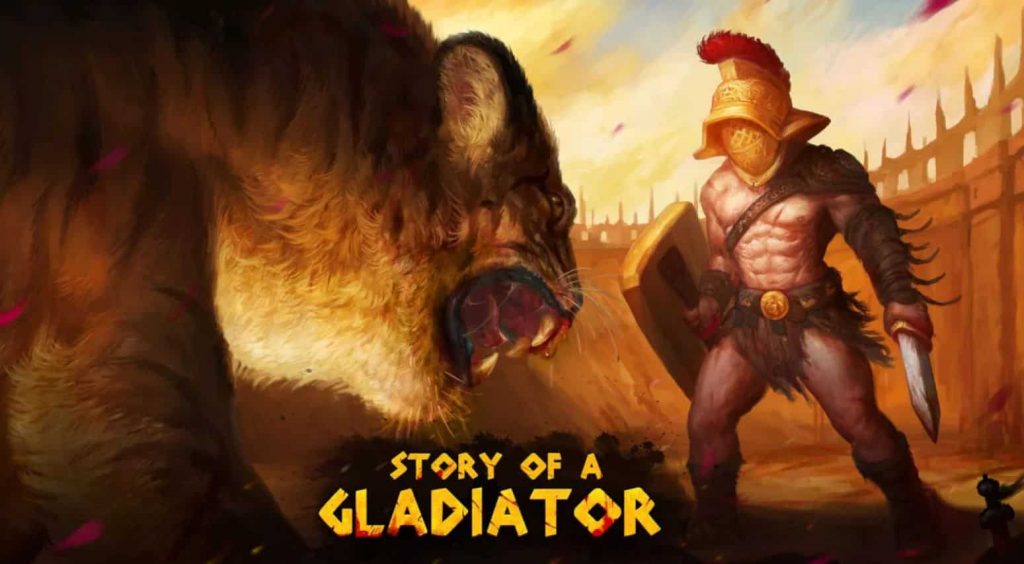 Look, I love the concept behind Story of a Gladiator. As a discount 2000 era Russell Crowe turned arena brawler from either Greece, Carthage or Egypt you are tasked with securing vengeance against the Roman Empire that has so brutally murdered your family and friends, leaving you with nothing. How you achieve this is by winning battle after battle in the arena, upgrading your warrior and essentially fighting your way to the very top. Sounds good right? Well, in practice the results are decidedly mixed to say the least.

Story Of A Gladiator PS4 Review

Right away, it becomes somewhat apparent that Story of a Gladiator might feel better at home on mobile or even PS Vita (bless its silicon), rather than a full-fat home console such as the PS4. With its somewhat basic hand-drawn 2D visuals, sprites and backgrounds and no-thrills sound effects, you could even go so far as saying that Story of a Gladiator looks akin to a particularly glossy Flash game, moreso than anything else.

Into the meat of things, Story of a Gladiator offers only a single-player campaign mode and nothing else; meaning that if you’re looking for anything to do once you’ve perfected the campaign, you’re going to be disappointed. Split between a trio of sub-campaigns, that are exactly twelve levels in length each, have one boss at the end of each and have a total three stars that can be awarded for completing each, there’s no hiding the fact that the structuire of Story of a Gladiator’s campaign mode is quite literally by the numbers to say the least.

Once you step onto the sands of the arena, each level consists of a number of waves from which numerous numerous enemies of different types and hue will emerge – all hellbent on turning you into a crimson fountain. In the beginning, you can attack, chain strikes into a combo by repeatedly pressing the X button or block with a shield in order to absorb incoming damage. It’s all pretty basic stuff that can be picked up rather quickly.

With the study of new moves however, Story of a Gladiator reveals its other main mechanism – stamina. You see, every attack and the use of every special move saps precious stamina and should the meter top out, your gladiator will stand there sunned for two whole seconds, which is easily enough for your enemies to deal a great amount of damage, if not kill you outright.

Another wrinkle that Story of a Gladiator brings to the table is that the crowd must be entertained (this is Ancient Rome, after all) by performing multi-kills, decapitations and other such audience pleasing efforts. In return, the crowd will show its appreciation by occasionally throwing rocks at your foes which will momentarily stun them, while pouches of money can also be jettisoned from the crowd, in addition to volleys of health-restoring fruits and vegetables too.

As a sum of all these mechanics, the combat in Story of a Gladiator actually feels quite responsive and skillful for the most part, as you must chain together evasions, special moves and strikes in order to make through one wave into the next. Where things fall down, is in the enemies that you fight – in so far as they are catastrophically dumb and wholly predictable. Though they vary in terms of look and damage output (dudes with two swords do more damage than those with one, animals such as tigers do heaps of damage and so on), they all telegraph their attacks very notably by moving towards you first, making the whole endeavor feel less satisfying as a result.

Compounding the issue of the combat is the grinding demanded of you in order to succeed in the later battles. Indeed, when you start to reach these later encounters, fully developed skills such as the jump attack must be developed otherwise those battles will become impossible, and naturally, because there are only a desperately finite number of skirmishes available, you find yourself replaying the same conflicts over and over.

This wouldn’t be quite so bad if the experience points being dished out were close to the original amount you received, but the law of diminishing returns kicks in and so only a fraction of those rewards are delivered, meaning that you have to spend that much longer in order to get the desired result. Then there’s just the sheer lack of variety on offer. With just three different arenas, a town hub and no extra modes, the appeal of Story of a Gladiator can soon run thin if you aren’t neurotically focused on perfecting each of the campaign’s 36 battles.

Also deserving of note is a presentation issue we don’t see too often in video games – spelling. Sadly, Story of a Gladiator is absolutely riddled with spelling mistakes (‘jumbing’ instead of jumping, ‘powerfull’ instead of powerful and so on), which detracts a fair amount from its otherwise rather charming, if decidedly retro visual presentation. In the end, Story of a Gladiator is an odd, little bite-sized game; attempting to fill that frustrating void of an almost total lack of games set in Ancient Rome on PS4 – though failing to justify its existence on account of the crushing weight of its flaws that leave it broken and battered on the sands of the arena.

Story of a Gladiator is out now on PS4, Xbox One, PC and Nintendo Switch.

An otherwise robust combat system is summarily undone by dunderheaded AI, repetitive grinding, a lack of modes and uneven presentation. We've wanted to return to Ancient Rome for years now on PS4, but not like this.

Story Of A Gladiator